Insider Advantage: Why we’ll wait to hear from Congressmen on 2014 Senate race

Originally published at InsiderAdvantage.com on March 4, 2013

Once Paul Broun announced his run for the United States Senate in 2014, the anticipated thumps of other shoes falling never materialized, as Broun’s Congressional colleagues play the waiting game to announce their intentions for 2014.

Congressman Tom Price recently said that he isn’t likely to announce his intentions until May or later, but the rest of his statement contained a kernel of what may be motivating Congressmen to postpone their official announcements for 2014.

Price noted at the time that he had raised $300,000 in the previous two weeks for his reelection campaign. Federal campaign finance law allows incumbent Congressmen to raise money for their reelection for as long as they are “actively seeking” the office. Once they are no longer actively seeking reelection they can’t continue raising money for that race.

From CovNews.com, which spoke to Douglas:

Douglas will host a campaign kickoff rally at 1:30 p.m., Thursday [February 7, 2013] on the steps of the Historic Courthouse, where he’ll expand on his platform of cutting federal spending/the economy/jobs, strong support for the 2nd amendment, making the U.S energy independent and maintaining a strong military.

Douglas, who was just elected to the county commission in November, said he’s running because he wants to continue Broun’s fiscally conservative, Republican ideology.

“Well I think the federal government is so dysfunctional now, fiscally and politically, that we need to send somebody up there that is willing to stake a stand and stop this fiscal and political nonsense, this crazy out of control spending and the negative impact that all these policies are having on the economy,” Douglas said Saturday night by phone.

Douglas has previously served in the Georgia House and Senate, and said he believes he has a good shot at winning the seat because he’s already represented seven on the biggest counties contained in the 10th district, which includes part of Gwinnett, Walton, Oconee, Henry, Barrow, Clarke, Newton, Baldwin, Butts, Morgan, Greene, Putnam, McDuffie, Jasper, Columbia, Lincoln, Oglethorpe, Wilkes, Washington, Johnson, Warren, Hancock, Jefferson, Taliaferro and Glascock counties. There are 25 counties in all in the 10th district.

“I think people will appreciate the fact that in my 12 years of public service when I tell them something that’s what I do and carry through with. They appreciate that. They’re sick of people (politicians in general) saying one thing here and then going to Washington and doing exactly the opposite,” Douglas said. “My record shows I’ll take a stand. I’ve never voted for tax increases, and wouldn’t do that in Washington. I wouldn’t vote to raise the debt ceiling in Washington. We need to take control of this dysfunctional government and get it under control.”

Though he was just elected to the county commission, Douglas said he’s running for U.S. Congress because there’s an open seat that just became available.

“If it’s going to be an open race, frankly, we need to have someone from Newton County in the race. It would be quite feather in our cap to have a congressman from Newton County. We’ve never had that I don’t think, unless it was 150 years ago,” he said.

Douglas does not have to [resign] from his seat on the Newton County Board of Commissioners until he officials qualified to run for U.S. Congress, something he said he’ll only do if it appears he has a shot. Qualifying will not be until April 2014, Douglas said.

“I look forward to being on the county commission for the next year and a half and serving the first district (of Newton County). I’m not going anywhere,” he said.

News of the day: I will be a candidate for the US House of Representatives from the 10th District of Georgia. My facebook page, Douglas for Congress is up and running, please visit and like it. Watch that page as we announce inititives and plans to help bring sanity back to our fiscal and politically dysfunctional federal government.

A poll conducted this weekend by GaPundit.com shows that voters approve of Governor Deal’s handling of job growth by a better than 3-1 margin.

Asked “Do you approve or disapprove of the job Governor Nathan Deal is doing in bringing new jobs to Georgia?” 60.1 percent of past Republican Primary voters answered affirmatively, while 18.6 do not approve of Deal’s performance and 21.3 percent are undecided.

A poll conducted by Public Policy Polling in December and November of 2012 showed self-identified Republicans giving Deal a job performance approval/disapproval rating of 58/20, with 23% not sure.

Last week, Fox5Atlanta noted a poll showing Governor Deal with a 55-29 approval/disapproval rating in another poll.

Towery said that the results suggest that Deal would be a strong candidate if he chooses to run for a second term next year.

“At this point I would say that Gov. Deal is about as popular as a governor in this region of the nation can get. We used to require approval of 50 percent to say a governor was in good shape for reelection, but that bar moved several years ago to around 45 percent, so Gov. Deal is sitting pretty as of now,” Towery said.

A poll commissioned by the Atlanta Journal-Constitution and released two weeks ago showed Deal with a 51% “favorable approval rating” among all voters, but did not meet the minimal requirements for disclosure of a poll under industry and academic standards. 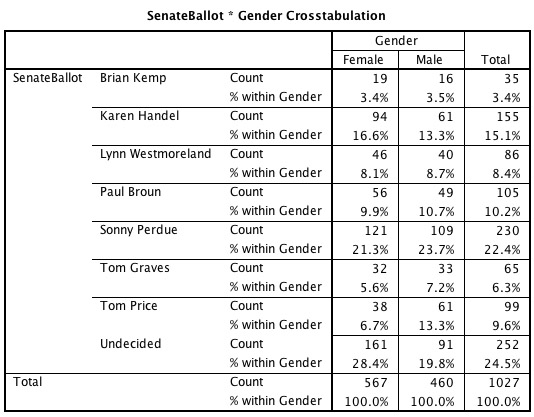 My AJC colleague Daniel Malloy, who never stops working, just finished up an interview with U.S. Rep. Tom Price – his first since that race for U.S. House conference chairman. The Roswell Republican lost to Cathy McMorris-Rodgers of Washington state, who was backed by House Speaker John Boehner.

I asked Price if he had given any thought to running for Senate.

“No, it’s completely premature at this point to even consider that,” he replied.