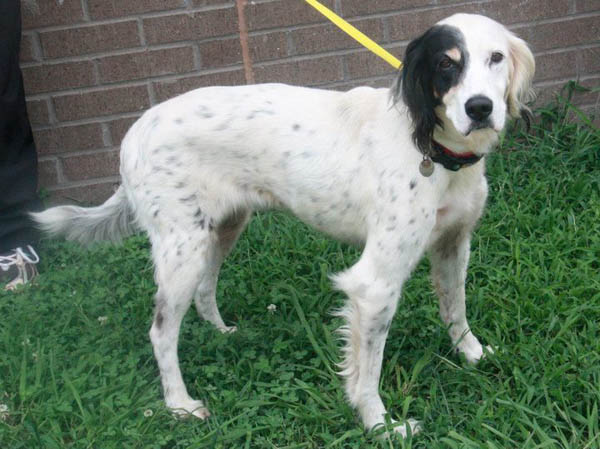 This young female English Setter mix might be a great bird dog. She might also be a couch potato. Either way, she’s available for adoption today from Gwinnett County Animal Shelter. Her ID is 26571 and she is located in pen 139. 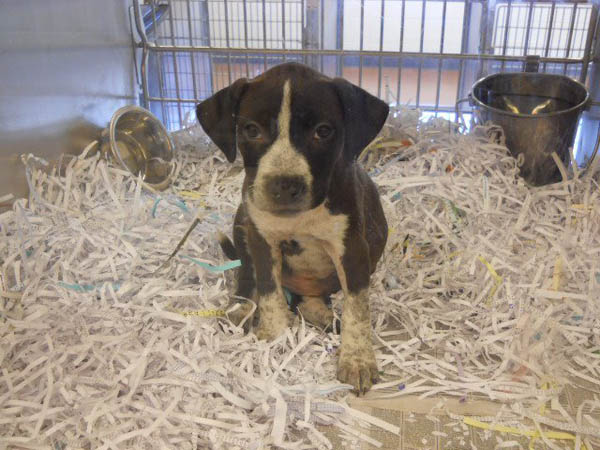 This puppy is described as a baby lab, but I’ve never seen a lab with markings like those. She is a large, playful and friendly puppy with ID #26454 and is in pen 214, waiting at Gwinnett County Animal Shelter for her new home and family. 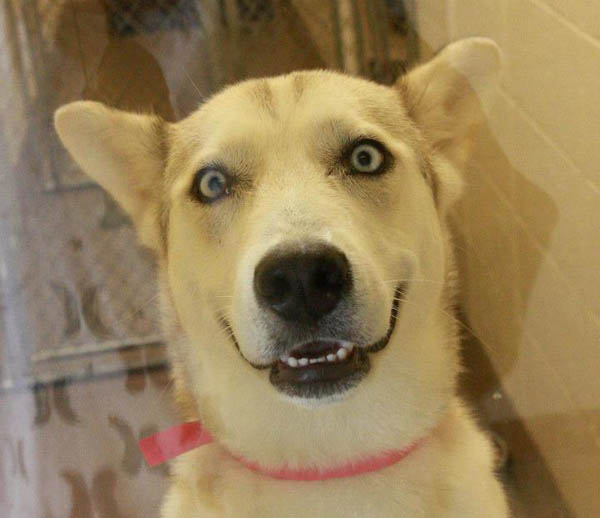 I’d already compiled this morning’s featured dogs when I saw this photo and couldn’t resist. She is a young Siberian Husky available for adoption today from Gwinnett County Animal Shelter. Large and friendly, she was surrendered by her owner and does not like cats.

GPB has the first of a three-part series of advice and stories about adopting dogs.

Former State Rep. Johnny Floyd of Cordele, who switched parties to become a Republican in 2006, has been elected Chairman of the Georgia Department of Transportation Board. Former State Rep. Jay Shaw was elected Vice Chair.

The committee concluded that “Sen. Balfour failed to maintain accurate records of his travel and consequently submitted inaccurate vouchers to the Legislative Fiscal Office,” according to its report, which was released late Thursday afternoon.

Veteran lawmakers said it was the first time the Senate Ethics Committee voted to punish one of the chamber’s members.

Balfour, chairman of the Rules Committee, was accused of billing the state for mileage while out of town on lobbyist-funded trips, and for failing to create a subcommittee to audit all senators’ reimbursement vouchers.

On Thursday, Balfour acknowledged making “some inadvertent mistakes and I’ve said that all along” and admitted he had not created an audit subcommittee — but neither had previous chairmen. He did not speak to reporters after the report was released.

Balfour has subsequently amended his reimbursements and will repay $350 to the state plus a $5000 fine. His chairmanship presumably will be subject to the Committee on Assignments.

“While I strongly agree with the Committee’s determination of guilt, I disagree with the penalty, which will not deter future serious breaches of Georgia law and is not as strong as penalties imposed when similar offenses have been committed in the past.”

“I will be preparing a minority report in the days to come which I will forward on to appropriate parties for consideration which will address these matters in much greater detail. Suffice it to say that the action taken today, in my opinion, further undermines public confidence in state government and reinforces the anything goes culture at the Capitol.”

Also not amused? Debbie Dooley, who I would argue is the most influential woman in Georgia politics at the moment.

Dooley called the penalties “a slap on the wrist” agreed to in a “backroom deal.”

“The attitude of the voters and the grass roots is that the Senate chamber is a good old boy network that actually takes care of their own and covers for their own,” she said.

She said her organization also will pressure Senate leaders to strip Balfour of his committee chairmanship. The Rules Committee decides which bills make it to the Senate floor, and as chairman, Balfour has great power to influence those decisions. Manure has become the metaphor of choice in the 12th Congressional District Republican Primary Runoff between State Rep. Lee Anderson and Rick Allen. Lee Anderson hit the air with an ad accusing Rick Allen of bringing out the manure spreader and visuals of Rick Allen getting what is presumably manure flung on his face.

Now, the Augusta Chronicle suggests that Anderson is mailing out the manure himself.

“It’s a flat-out lie,” Paradise said. “This piece is a last-minute piece, and maybe they thought ‘let’s send it out and hope we don’t get caught.’ But they slipped up.”

I’ve got to wonder what the robocalls sound like in that campaign.

Also going negative in the runoff are State Senator Miriam Paris and her opponent David Lucas.

During a news conference Thursday, Lucas addressed a controversial campaign mailer that featured an unflattering picture of the former state representative who appears to be yawning. The mailer goes onto to say:

“We don’t need a sleeping senator. David Lucas falls asleep on the job. And when he wakes up, he’s a nightmare. David Lucas slept while thousands of jobs left Middle Georgia.”

Now Lucas is firing back. He’s says if anyone has been sleeping on the job it is Paris.

“The senator elect was asleep on the job when they did the consolidation bill that she could not explain,” Lucas said.

The ad was paid for by Georgia Forward, a group that describes itself as independent and non-partisan. Lucas believes that ad was paid for by republicans. He feels that negative campaigning is taking over the race but says he’s not the one behind it.

The commission posted on Thursday Cochran’s resignation letter, a letter from Gov. Nathan Deal accepting his resignation and a copy of a consent order signed by Cochran agreeing to resign and to not seek any other elected or appointed judicial office.

A report accompanying those documents, also signed by Cochran, says the commission was investigating whether Cochran “allowed the prestige of his office to advance his private interests” and whether he “pre-signed blank arrest warrants for completion by law enforcement officers while he was absent from the office.”

Cochran was also recently accused of making advances toward a woman before him on methamphetamine charges.

An ethics complaint filed against Fulton Magistrate Judge Melynee Leftridge in the days before the July 31 primary will be investigated by the Georgia Government Transparency & Campaign Finance Commission to determine if any laws were violated.

The complaint was filed by Charlie Stadtlander, a gay voter. Leftridge faced off against open lesbian Jane Morrison in the non-partisan campaign for the open seat of Fulton State Judge. Morrison won with more than 60 percent of the vote.

Statdlander accused Leftridge in his complaint of an “apparent elaborate scheme to funnel some $18,500 to a company responsible for maintaining a websitewww.pirouettesexy.com” that features “pictures of scantly clad women.”

But here’s where the Pirouette Companies saga turns into more than just a remnant from a campaign that’s now finished:

Mitzi Bickers, a longtime political operative, said she consults for Piroutte Companies and started working for the company earlier this year.

The company has a youth program that includes teaching dance to young people, but the money Leftridge paid was to Piroutte Companies and not to a dance company, Bickers said.

“We have not done anything unethical,” she said.

Bickers, who is gay, took an unpaid leave of absence from working for Mayor Kasim Reed’s administration in May to work for Pirouette. Records show that Pirouette was paid more than $115,000 by Citizens for Transportation Mobility, which supported TSPLOST. Reed was a strong outspoken supporter of TSPLOST.

“I took an unpaid leave of absence so there would not be any conflict of interest with TSPLOST,” Bickers said.

Atlantan Cassie Mitchell is headed to London to compete in the Paralympics in three wheelchair sports, the 100m and 200m sprint and the discus. I met Cassie when I volunteered at Shepherd Spinal Center with the Quad Rugby Program. She’s an amazing athlete and holds a Ph.D. in biomedical engineering from Georgia Tech, where she works.

Three members of the US Army marksmanship team who competed in the London Olympics have returned to Fort Benning where they are teaching junior rifle camp.

The Marksmanship Unit sent seven soldiers to the competition at the Royal Artillery Barracks, but Sgt. Vincent Hancock was the only one to strike gold in men’s skeet shooting. He’s on leave preparing for a big welcome home Saturday in Eatonton, Ga.

Sgt. 1st Class Josh Olson, the first active-duty soldier to ever qualify for a Paralympics, is the only member of the Marksmanship Unit left to compete in London. Olson, who lost his right leg after he was wounded in Iraq in 2003, will compete in the 10-meter air rifle Sept. 1 and the mixed 50-meter prone rifle Sept. 4.

As an instructor, [Sgt. 1st Class Eric] Uptagrafft said he’s teaching the 15-17-year-old shooters the basic fundamentals of firing a small bore .22-caliber rifle at a target less than the size of a dime 50 meters away.

“All the things you use to get to the Olympics are the things these kids are going to use hopefully to get there in eight or nine years,” he said.

Students had to apply to earn a spot at the five-day camp. Michael Garner, 16, of Celina, Texas, said it’s exciting to get help from world-class shooters and Olympians.