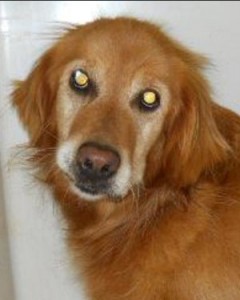 Hannah is a five-year old female Golden Retriever who originally hails from North Carolina but is now in the custody of Adopt A Golden Atlanta, from whom she may be adopted. She is currently heartworm positive and AGA is seeking tax-deductible donations to help pay for the $500 heartworm treatment.

Since its founding, AGA has rescued 2694 Golden Retrievers and similar breeds at an average cost of $841 per dog. Their next adoption day is Sunday, April 1, 2012 at the Pet Set on N. Druid Hills at Briarcliff.

Today’s Senate legislative calendar is available here and you may watch the session online here beginning around 10 AM. Here is the Senate Committee Meeting schedule.

Today’s House legislative calendar is available here and you may watch the session online here beginning around 10 AM. Here is the House Committee Meeting schedule.

The National Rifle Association’s Institute for Legislative Action is blaming Senate President Pro Tem Tommie Williams (R-Lyons) and Senate Majority Leader Chip Rogers (R-Woodstock) for working behind the scenes and against the NRA to kill an amendmentauthored by Sen. Don Balfour (R-Snellville) to his own Senate Bill 350.

Senate Leadership — more specifically state Senate President Pro Tempore Tommie Williams and state Senate Majority Leader Chip Rogers — worked against the NRA’s efforts behind the scenes and helped persuade their colleagues in the Republican Senate caucus that the NRA’s employee protection legislation was too divisive of an issue and it was apparently more important to side with the Georgia Chamber of Commerce and the Georgia Association of Realtors than to uphold the rights of law-abiding gun owners throughout the state.

It is unclear on what basis the NRA makes those assertions against Senators Williams and Rogers.

Senate Bill 350 provides that firearms seized by law enforcement agencies that are not being used as evidence must be returned to their rightful, legal owners if the owner was innocent of wrongdoing.

The Macon  Telegraph editorial board writes that House Bill 811, which would require the state to spend earmarked user fees for the purpose the fees are intended, rather that simply being added to the General Fund, leaves the fox in charge of the henhouse, but at least gives the hens some protection.

Maggie Lee write in the Telegraph that a GOP legislative supermajority is possible in this year’s elections.

“If things break right, (the GOP) should be able to get a two-thirds majority” in the state House and Senate, said Charles Bullock, professor of political science at the University of Georgia and a student of state politics for nearly 40 years.

In my opinion, there is nothing magical about a legislative supermajority as the GOP caucuses seldom see unanimity on major issues, as illustrated by the difficulties in passing the Charter School Constitutional Amendment.

Juvenile justice reform legislation, which will emphasize treatment options for drug offenders designed to lower repeat offenses rather than strict jail terms, is before a joint legislative committee chaired by Rep. Rich Golick and Sen. Bill Hamrick. According to the Walter Jones of the Morris News Service:

Georgians overwhelmingly support the changes, according to a survey released last month by the Pew Center on the States.

In a telephone poll, 85 percent of the 600 likely voters questioned in January said they agree that the sentence didn’t matter as much as reducing the likelihood of a repeat crime.

Rep. Jay Powell and Attorney General Sam Olens wrote an op-ed for the Atlanta Journal-Constitution arguing that reforms to the state’s Open Records and Open Meetings acts further the stated intent that “Open government is essential to a free, open, and democratic society.”

The AJC believes that Democrats in the Georgia Senate, who hold 20 of 56 seats, have made themselves relevant by uniting against GOP measures that require a super-majority for passage. But UGA Political Science Professor Charles Bullock told the AJC, “Suddenly, [Democrats] have been exiled to Pluto or something,” Bullock said. “It’s rare the Republicans do need the support of the Democrats.”

Lobbyists on both sides of the Charter School Amendment have been spending money at a furious pace to influence the course of the legislation.

An Associated Press analysis of the bi-monthly reports that lobbyists turn in to the state ethics commission shows that charter school supporters have spent at least $7,800 since January on everything from breakfast to framed photos for state lawmakers. On the other side of the debate, groups representing teachers, school administrators, school boards and public school parents have spent at least $2,400 on lunch and coffee for lawmakers.

Congratulations to State Rep. Joe Wilkinson on the birth of his first granddaughter, Ella Grace Wilkinson, who weighed in at eight pounds. Regarding the fact that Ella Grace was born in Columbus, Ohio, Rep. Wilkinson said, “Just because a cat has her kittens in the oven doesn’t mean that they are muffins. She must be a Southerner because she had the good manners to wait to be born on a day that her Dad had off from work.”

Attorney General Sam Olens accepted $815 million on behalf of Georgia from banks accused of robo-signing to foreclose on homes in Georgia. Approximately $82 million will be paid to homeowners affected by the fraud at the rate of $2000 per homeowner. Homeowners retain the right to sue for wrongful foreclosure. $104 million will go directly into the state’s general fund and Gov. Deal is asking the legislature to direct at least part of that into the rainy day fund.

Meanwhile, Ron Paul supporters were busy disrupting and delaying conventions across the state.

The Paul brigades’ strategy was to try to outlast the party regulars at the county conventions, raising unexpected issues and delaying long enough for the regulars who were unprepared for the delays to throw up their hands and leave the convention sites to fulfill other obligations.

Previously, the Daily Beast wrote about the plans of the Paulbots:

The Paul campaign has rigorously organized its volunteers to attend the mass precinct meetings that took place all over Georgia. It has been instructing supporters on parliamentary procedure and state Republican rules. It is also giving advice on convention etiquette. In an e-mail to supporters, Charles Gregory, Georgia State Coordinator for Ron Paul 2012, wrote:

“It is my personal recommendation that you dress professionally and not overtly identify yourself as a Ron Paul supporter. Your position should simply be: “I’m here to send Obama home, that’s all I care about.” If asked who you support—just say you ‘haven’t made up your mind yet but they’re all better than what we’ve got now,’ etc.”

One longtime Gwinnett County Republican activist wrote on Facebook that, “It was disgusting how disruptive they were at our convention here in Gwinnett!” and another from coastal Georgia wrote, “Funny how the Paul bots are so critical of the political parties, and the political process, yet so eagerly game the system in an attempt to steal delegates for their candidate after the voters so soundly rejected him.”

It was bad enough at the DeKalb GOP convention that I attended that I now believe that the state GOP should adopt rules either requiring a loyalty pledge to support the eventual nominee as long as his name is not “Ron Paul,” or a verified record of voting in Republican primary elections that could be waived by local conventions on a case-by-case basis.

Speaking of the Alabama and Mississippi primaries on which Newt Gingrich has placed all his chips, Emory University Political Science Professor Merle Black told NPR, “Santorum presents a direct challenge to the electoral coalition Gingrich put together in Georgia. If Santorum wins either of these states, he destroys the rationale for Gingrich’s candidacy.”

Nate Silver, who writes the FiveThirtyEight column for the New York Times says that geography is the best predictor of which candidate will carry a state’s primary or caucus.

Silver notes that Santorum carried Kansas and three adjoining states and that all his wins were in contiguous states, while Gingrich’s only wins were in the Deep South states of Georgia and South Carolina and Romney is strongest in urban and suburban counties.

Congressman Paul Broun will debate challengers, but not for a couple months. Opponent Stephen Simpson, running in the Republican primary, had previously challenged Broun to a series of five debates.

But Broun spokeswoman Jessica Hayes said the congressman won’t debate until after the candidate qualifying period ends May 25. No date has been scheduled, she said.

Republicans are lining up to challenge Democratic Congressman Hank Johnson. Chris Vaughn is a pastor and hosts a cable show and has been endorsed by Georgia Conservatives in Action and Henry County Commission Chair B.J. Mathis. Catherine Davis, who has previously challenged Johnson announced at the DeKalb GOP Convention on Saturday that she is running again.

Alan Shinall has resigned as Chairman of the Cherokee County Elections Board in order to run for a new house seat in district 23. Shinall has chaired the elections board for 10 years and joins Mandi Ballinger and businessman Troy Welker, who previously announced for the seat. All three candidates are running as Republicans.

Chief Judge J. Carlisle Overstreet of the Superior Court for the Augusta Judicial Circuit will run for reelection this year in Burke, Columbia and Richmond counties.

Richmond County Sheriff Ronnie Strength will retire from the office he has held for 11 years and is not seeking reelection after 35 years with the department.

The City of Cornelia, in Habersham County, is headed to an April 3 special election runoff for Mayor between J.C. Irby, Jr. and Ernie Garrett.

Dawsonville Mayor Joe Lane Cox, who served since 2004, died Friday. “Our city is in mourning,” said Councilman James Grogan. “Our prayers are with his family.”

The Gwinnett Daily Post reports that approximately 20 percent of cars using HOT lanes in Gwinnett County are not paying the required toll.

The director of the Energy Institute at MIT warns that distributed production of solar power added to the existing grid may destabilize the distribution of electricity.

“That reflects what an amazing machine this is, spread out geographically, always having to balance demand and supply because electricity is not stored,” he says.

Every day, with the flick of a switch, millions of Americans tap into the electricity grid. It’s a web of power stations, transformers and transmission lines that span the continent, distributing electricity like veins and arteries distribute blood.

Electricity has to keep flowing all the time. Grid operators constantly match what power plants are producing with what people and their TVs, microwaves and air conditioners need. It’s the world’s biggest balancing act.

So what happens when you add in unpredictable sources of electricity, like wind or solar power?

“The operator does not have control of when to turn it on and off,” Moniz says. “It’s a new challenge that we just have to meet, and we’re not doing it at anything like the pace that I think we need.”

“We have to have a backup,” says Steve Berberich, the grid’s CEO. “There are times when Mother Nature decides to bring in clouds and turn off the wind, but I think everybody in that case still wants to have power.”

Oops – twice this morning I mistakenly referred to the Macon Ledger-Enquirer, when I meant to write Macon Telegraph. I blame it on 5 AM today really being 4 AM in my head.