A little less than ten years ago, the firm I worked for was commissioned to poll the Georgia general election. We included a ballot question for the Governor’s race, which I often like to include because it gives us a benchmark by which to compare our surveys against other publicly-released surveys. At the time every single poll that was published had Barnes winning:

In the final poll taken before the 2002 Georgia gubernatorial election, incumbent Roy Barnes held an eleven point lead over his Republican challenger, Sonny Perdue (Salzer 2002a). This was hardly surprising. Barnes, a first- term Democrat, had led in every public poll taken since the campaign began (Dart 2002), and Perdue never edged closer than seven percentage points until election day (Beiler 2003).

When our sample came back showing Perdue with a narrow victory, I simply didn’t believe it. I was scared to give the client a survey analysis that included something that was so clearly wrong because it would lead the client to doubt everything else in the poll. I actually asked management to authorize a re-sample, and when it came back still showing a Perdue victory, I sheepishly gave the results to our clients.

Once Georgians had their say on November 5, however, Barnes’ defeat was more than stunning—it was historic. Not only had Perdue overcome what seemed to be insurmountable polling and fundraising disadvantages, his election broke a Democratic stranglehold on the Georgia governorship that had kept the GOP out since Reconstruction. For a Republican running for governor in Georgia, Perdue won an unprecedented share of the vote among rural whites, an indication of a continuing realignment in favor of the GOP (Wyman 2002, 3). In winning 51 percent of the vote, Perdue had broad support, carrying 118 of the state’s 159 counties. 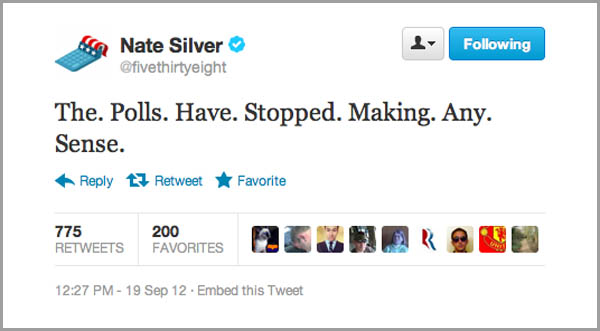 I’d just seen a Marquette University poll of Wisconsin, which put President Obama 14 points ahead of Mitt Romney there. This came after a Rasmussen Reports poll of New Hampshire, published earlier that day, which had given Mitt Romney a three-point lead in the Granite State.

but he could easily have been speaking of the Peach State, where local pollster Insider Advantage showed Romney with a 21-point lead over President Obama, while a competing poll by YouGov showed only a 6-point Romney lead.

So, what’s going on when different “scientific” polls show vastly different results? Silver has one set of plausible explanations.

The San Francisco Chronicle has an article out that discusses factors that may explain differences in polling outcomes.

At this time of year, the difference between poll results can be explained by everything from who is being surveyed (are they “likely” voters or just “registered”) to how many cell phone users (who are generally younger and from more diverse backgrounds) are contacted to how the questions are worded.

And while top pollsters try to adhere to common standards and best practices, there is a lot of room for interpretation in the way each constructs their universe of respondents.

“It’s a mixture of magic and science and research – and there’s more magic now because we have less science to guide our decisions,” said Oakland pollster Amy Simon, who is a leading expert in public opinion on same-sex marriage.

They also have suggestions for how to interpret polls, given the variance that is out there.

Consider the respondents: “Likely voters” are more credible, as they’re, well, more likely to vote. “At this point, don’t look at anything from registered voters,” said Oakland pollster Amy Simon. See if the poll includes cell phone users, who tend to be from more diverse backgrounds, younger and more likely to live in urban areas.

Examine the wording of questions: UC Berkeley Professor Gabe Lenz often teaches his students about a poll from the 1970s where 44 percent of Americans said they would not allow a Communist to give a speech, but only 22 percent would “forbid” it. The difference: Many people are often reluctant to sound harsh to a live interviewer, which “forbid” implies.

Treat a pollster like a movie critic: “Pick a poll and follow it,” said Michael Dimock of the Pew Research Center. “You can follow its nuances and learn its tendencies.” Others, like Lenz, said peace of mind can be found with those who aggregate the major polls and incorporate them into a trend, like Nate Silver of the FiveThirtyEight blog and RealClearPolitics.com

At the end of the day, here’s my recommendation for public consumers of polling data. Take the Olympic scoring approach, where you toss out the highest and lowest numbers, and average the rest based on the sample size. In statistical terms, you’re removing the outliers, and broadening the sample size. That’s not precisely correct, but it’s a pretty good back-of-the-envelope method that might help you make some sense out of competing polls.

Check back later today for more on this issue, and our recent survey on the Presidential race in Georgia.

Todd Rehm, an Atlanta-based pollster and political consultant released the first public voter survey on the Charter School Amendment that will appear on the General Election ballot on November 6th, 2012.

The question, which uses the same language that will appear on the ballot, shows that 48.3% of likely General Election voters, defined as those who voted in the 2008 or 2010 General Elections, currently favor the measure.

While nearly a majority favor the measure, those who did not indicate they would vote for it are evenly split, with 26.2% saying they will vote against it, and 25.5% undecided.

“When you drill down into the results, two things become apparent,” said Rehm. “First is that the measure enjoys widespread support among most of the demographic categories we looked at. Second is that the only group among whom the measure doesn’t receive more support than opposition is voters who don’t identify with a political party, who are primarily undecided on the Charter School Amendment. But with Georgia’s electorate being highly partisan, there aren’t enough of these voters to make the difference on their own.”

Rehm noted that the ballot question is very generic and doesn’t give voters much to go on.

“If you don’t know about the Charter School Amendment before you look at the question, it’s hard to know what it’s intended to do or what effect it will have. That may make that the preamble to the question very important for the ultimate results.”

The survey was conducted on September 4, 2012 and includes 1331 respondents who answered all the questions. Respondents were drawn from people who voted in either the 2008 or 2010 General Election, with commercially-available phone matches appended. The margin of error is +/- 2.68 points at the 95% confidence level. The technology used was Interactive Voice Response, (IVR) which is commonly referred to as a “robopoll”.

Results of the survey may be downloaded here.

A statement of methodology is available here.

1. Shall the Constitution of Georgia be amended to allow state or local approval of public charter schools upon the request of local communities?”