The Mayflower left Plymouth, England for a voyage to America on September 6, 1620.

President William McKinley was shot on September 6, 1901. He is buried in Canton, Ohio, not far from the Professional Football Hall of Fame.

The first supermarket, a Piggly Wiggly, opened on September 6, 1916 in Memphis, Tennessee.

On September 6, 1941, Margaret Mitchell christened the cruiser USS Atlanta – Atlanta would later sink after being hit by 50 shells and a torpedo during the Battle of Guadalcanal. 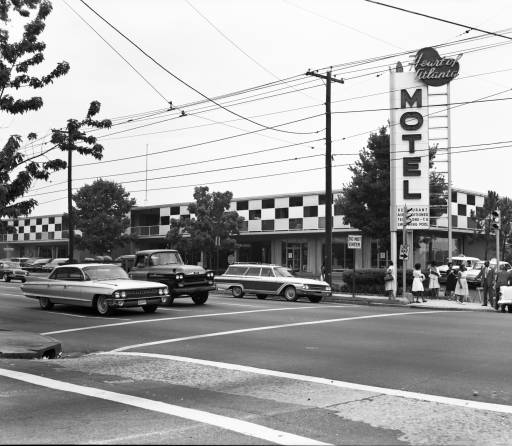 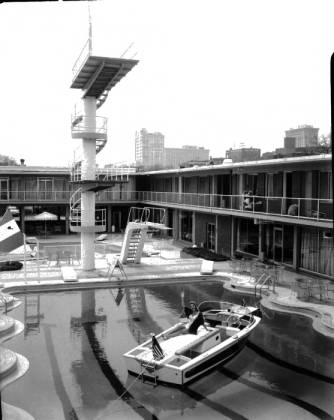 Atlanta Time Machine has a webpage with interesting images of the Motel.

The Summerhill Race Riot broke out in Atlanta on September 6, 1966.

Former Georgia Governor Jimmy Carter returned to the Little White House in Warm Springs, Georgia, on September 6, 1976 to kick off the final phase of his presidential campaign.

Gov. Brian Kemp declared a state of emergency Sunday in Chattooga and Floyd counties after thunderstorms dropped more than 10 inches of rain on parts of the region.

The Chattooga River was expected to crest late Sunday at 16.1 feet before it starts receding. Flood stage is 14 feet. Heath Creek near Armuchee was at 8.7 feet and rising Sunday afternoon. Flood stage is 8 feet.

Kemp said the Georgia Emergency Management Agency is working with the counties’ EMAs to assess the damage and determine what assistance is needed.

Sheriff Mark Schrader said Sunday the area around the jail and the courthouse was flooded. He also urged motorists to avoid the area and not travel in Summerville at all, if possible.

Two veterans spoke about their experiences with new experimental treatments for PTSD, according to the Capitol Beat News Service via the Statesboro Herald.

Following multiple combat deployments, Ethan Whitfield and Marcus Capone traveled outside of the U.S. for counseling and treatment of their PTSD with psilocybin after standard drugs failed to treat their severe depression. Both reported instant results following just one “dosing” session.

“It induces a state of mental change where one reevaluates one’s experience of the world, one’s connectedness to oneself and others … breaking people out of past patterns of thought,” said Dunlop, who also heads the newly created Center for Psychedelics and Spirituality at Emory.

Dunlop said none of the studies conducted with psilocybin and other psychedelic drugs thus far has focused on veterans, something he hopes to remedy. He said he is working to raise $1.85 million to conduct such a study.

The Glynn County Board of Elections and Registration will host a show-and-tell with their voting machines, according to The Brunswick News.

It plans to test the machines used by voters in early voting, on Election Day and those used to scan absentee ballots from 8:30 a.m. to 4:30 p.m. on Wednesday at the board of elections office at 1815 Gloucester St. in Brunswick. The event is open to the public.

Chris Channell, the election board’s director, said the tests are required by the state. Data from the state’s Election Project is downloaded into each voting machine and when it is retrieved the results should be identical to what was entered.

When the votes are counted during the test, Channell said they tabulate all the votes from machines that will be dedicated to specific polling places for early voting and in the November general election. The new state mandate requiring one voting machine for every 250 registered voters means some polling places will have more than 20 machines, he said.

Channell said tests of voting machines in advance of elections have been required by state elections officials for years. It’s only been in recent years where election results have been questioned, though not in Glynn County.

The Heritage Foundation’s annual Election Integrity Scorecard ranks Georgia #2 in election security, according to the Center Square via the Albany Herald.

The scorecard compares election laws and regulations in each state and the District of Columbia that affect the security and integrity of the process with best practices. Georgia received a score of 83 on a 100-point scale.

“Georgia’s election system has integrity, and appropriately balances security and accessibility,” Interim Deputy Secretary of State Gabriel Sterling said in a news release last month after a federal judge declined to issue a preliminary injunction against Georgia’s “line relief” ban at polling places. “Just like in the primary, we hope to see record-breaking turnout once again.”

The study gave Georgia a 20 out of 20 for its voter identification requirement. It gave the state 24 out of 30 for the accuracy of its voter registration lists.

However, the study awarded the state zero out of three points for its election litigation procedures and its restriction of automatic registration. Under state law, an application for a new or updated driver’s license or identification card is also an application for voter registration for anyone within six months of their 18th birthday.

Republican Chris West campaigned for Congress in the Second District in Albany, according to WALB.

“This is the first time that we’ve truly had a Republican candidate to have a strong, concerted effort to get out the vote, and we’re doing it right here in Albany,” West said.

“A lot of folks know us, but a lot of folks don’t know us. So we’re trying to go out and introduce ourselves and show who we are, making voters comfortable with who we are,” he said. “We want to represent the people and to be their voice. We’re going to work hard to earn their trust.”

“We need somebody to step into leadership that’s going to be able to help unleash the potential that’s here. I want the voters to give me a shot. We need a new voice. If I don’t do my job, in two years you can vote me out,” West said.

West said he will support law enforcement and give them the resources to keep people safe and attract new businesses.

He said other priorities for him are developing a relationship with the Marine Corps Logistics Base, and reinvesting in areas that drive tourists to Albany.

Republican Mark Gonsalves released his first ad in the Seventh Congressional District race, according to the Gwinnett Daily Post.

“My family immigrated from Portugal, I learned firsthand the American dream is real,” Gonsalves said in a statement. “I worked heard, saved up and was able to attend college. When I graduated, I knew I could fulfill my dream by helping others achieve theirs. So, I helped failing businesses across the country turn it around.”

Gonsalves does not mention McBath at all in the ad. It is mostly just him explaining his life story. The closest he comes to mentioning Democrats — he doesn’t even specifically mention the Democratic Party itself by name in the ad — is showing a photo of President Joe Biden while claiming “the government in DC doesn’t care” about inflation and taxes.

Athens-Clarke County Commissioners will consider hiring a consulting firm to help address homelessness, according to the Athens Banner Herald.

An agenda item that requires a vote at Tuesday’s commission meeting authorizes the hiring of The Cloudburst Group at a cost of $133,116.

The consulting business located in Landover, Maryland is a women-owned small business with 16 years of experience in dealing with governments and handling housing and low-income issues, according to information the group provided to the commission.

“Typically, the mayor and commission would only look at a project like this if it exceeded $200,000, but when they started the process to deploy American Rescue Plan funds in the community, they explicitly identified that they wanted to approve all of the strategic planning work,” he said.

Cloudburst will examine the current conditions dealing with homelessness in the community including working with “stakeholders,” businesses and residents to identify what actions need to be put in place, according to Saunders.

The Fulton County special grand jury requested some records related to an alleged election security breach in Coffee County, according to the AJC.

The 23-person grand jury earlier this week approved a subpoena for documents from the Atlanta IT services firm SullivanStrickler. The subpoena was obtained by The Atlanta Journal-Constitution on Friday.

The subpoena seeks all documents between the company and Sidney Powell or Lin Wood — two conservative attorneys aligned with the Trump campaign.

On Jan. 7, 2021, a day after supporters of then-President Donald Trump ransacked the U.S. Capitol to halt the certification of the 2020 election, SullivanStrickler sent four of its employees to Coffee County, some 200 miles southeast of Atlanta at the behest of Powell, then a lawyer for the Trump campaign.

The Georgia Bureau of Investigation opened a criminal investigation last month to examine the breach allegations, and the Secretary of State’s office said it’s been investigating since March.

Former Coffee County Republican Party Chair Cathy Latham is under scrutiny in connection with the alleged security breach, according to the AJC.

“It looks to be a coordinated effort at the highest levels of the Trump campaign,” said David Cross, an attorney for the plaintiffs in the lawsuit. “What we see here is what looks to be an interstate effort to get access to the Dominion voting equipment and in particular the underlying software.”

On the video, Cathy Latham, former Republican Party chairwoman in Coffee County, greets four technicians for SullivanStrickler outside the county’s elections office on Jan. 7, 2021. She then walks them into the office, where they copied half a terabyte of files from an elections server, memory cards, ballot scanners and other computers.

Latham was one of 16 Republicans who met behind closed doors in the Georgia Capitol on Dec. 14, 2020, to cast the state’s electoral votes for Trump even though Democrat Joe Biden had won by nearly 12,000 votes. She is now the target of a Fulton County criminal investigation.

Elections servers and computers are supposed to be kept secure to reduce the risk of tampering. Coffee County’s former elections director, Misty Hampton, who resigned in February 2021, can also be seen on the videos with Latham and the tech experts. Hampton couldn’t be reached for comment Monday.

The GBI opened a criminal investigation of computer trespass last month, and the secretary of state’s office has said it has been investigating since March.