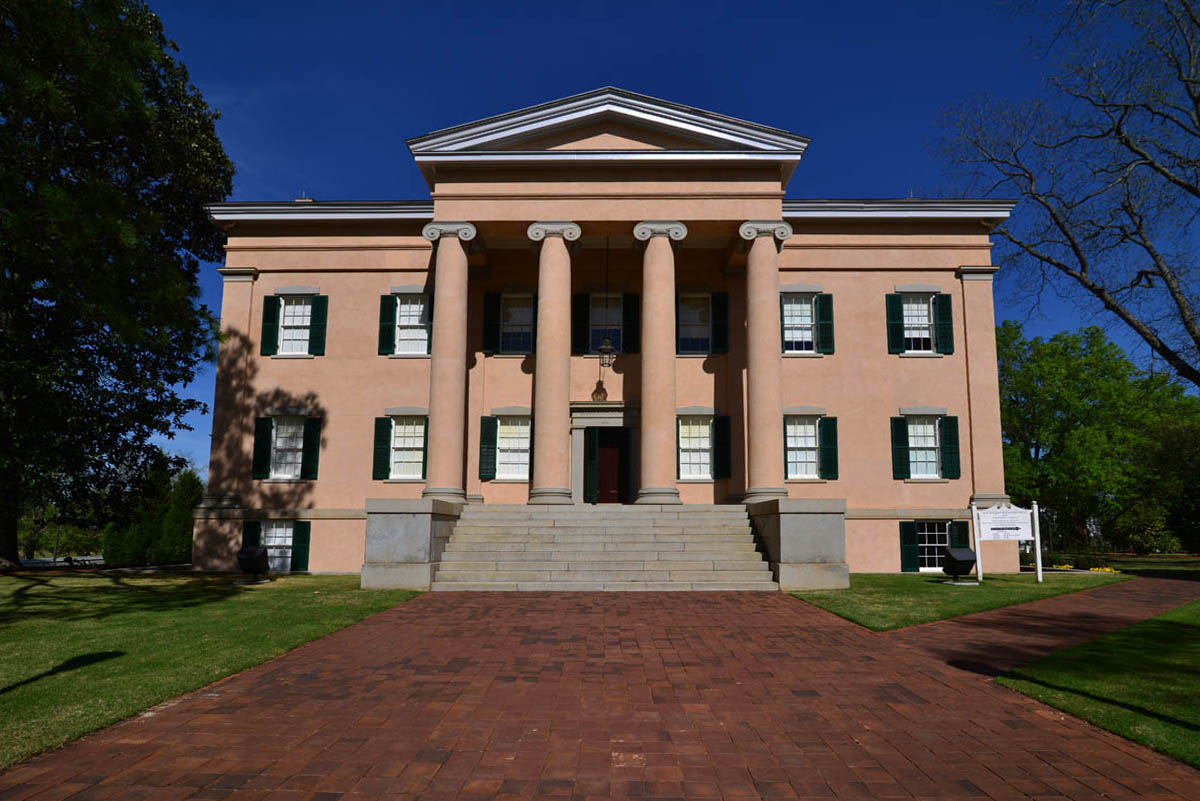 On November 23, 1864, General William Tecumseh Sherman himself entered Milledgeville, where used the Governor’s Mansion as his headquarters.

Early Voting begins today in the Western Judicial Circuit, comprising Clarke and Oconee Counties, according to the Athens Banner Herald.

Oconee County voters can vote in advance from 8 a.m. to 5 p.m. Monday, Tuesday and Wednesday at the Oconee County Civic Center on Hog Mountain Road.

One of the five Clarke County advance voting sites will be open for early voting Monday — the Athens-Clarke County Board of Elections Office downtown on Washington Street, where voters can make their choices from 8 a.m. to 5 p.m.

The downtown office and four other sites will be open extended hours for voting Tuesday.

The deadline for returning absentee ballots is 7 p.m. on Election Day Dec. 1.

Governor Brian Kemp issued Executive Order #11.20.20.01, which orders the suspension of any rules prohibiting individually identifiable vaccination records from being disclosed to the federal government as part of the plan for distribution of a COVID-19 vaccine.

Governor Kemp also signed a certification of Georgia’s election results, according to FoxNews.

Georgia Gov. Brian Kemp certified the state’s presidential election results Friday in favor of President-elect Joe Biden — but called for an audit of the votes.

Kemp told the Atlanta Journal-Constitution it was “completely unacceptable” that stashes of thousands of uncounted ballots were found in several counties during the manual hand recount after the initial results.

Kemp, who has faced ire from Trump and other Republicans over the process and his decision to certify the results, said he understood Trump’s frustration.

“He’s a fighter,” Kemp said. “But at the end of the day, I’ve got to follow the laws of the constitution of this state and that’s exactly what I’m doing.”

The governor told the Journal-Constitution he’s legally bound by state law to certify the results given by Secretary of State Brad Raffensperger following the recount.

He also urged lawmakers to consider requiring voter ID for mail-in ballots, which has surged during the pandemic.

Kemp, a former secretary of state, expanded on his remarks in an interview with The Atlanta Journal-Constitution shortly before he certified the electors. He refrained from firing back at Trump, who has peppered him with criticism, but expressed broader “frustration” at the system.

“State law requires us to formalize the certification that the Secretary of State delivered earlier today. I’m legally bound to take this step.” [said Kemp].

“I would just say I’m formalizing the certification. Now that Secretary Raffensperger certified, it triggers the ability of the Trump campaign to ask for the recount. If something were to happen, I’m still part of that process. So my take on all this is: I’m following the law and the rules …” [said Kemp].

“First of all, I’d tell them I am following the law. That’s what I told them I’d do when I took my oath. I’m frustrated with the outcome, but we’ve got to focus on the firewall in the U.S. Senate and voting Sens. David Perdue and Kelly Loeffler back to Washington to stop the drastic measures Democrats have embraced over the years.” [said Kemp].

“It is literally the one check we have left in the checks and balances in our country. I think we can send the strong message that Georgia is not a blue state.” [said Kemp].

The Trump Campaign has formally requested a recount of the Georgia election results, according to the Savannah Morning News.

The statement from Trump’s legal team said: “Today, the Trump campaign filed a petition for recount in Georgia. We are focused on ensuring that every aspect of Georgia State Law and the U.S. Constitution are followed so that every legal vote is counted. President Trump and his campaign continue to insist on an honest recount in Georgia, which has to include signature matching and other vital safeguards.”

Georgia law allows a candidate to request a recount if the margin is less than 0.5%. The recount would be done using scanners that read and tabulate the votes. County election workers have already done a complete hand recount of all the votes cast in the presidential race. But that stemmed from a mandatory audit requirement and isn’t considered an official recount under the law.

The Georgia State Elections Board will consider changes to voting rules ahead of the statewide runoffs, according to the AJC.

The State Election Board on Monday will consider three emergency rules governing the processing of ballots and voter registrations that would affect the January runoff election.

The first would extend an authorization for counties across the state to provide drop boxes for absentee ballots — an authorization made last spring and renewed in July. Counties must use video recording to monitor the boxes and adopt other security measures.

The third proposed rule directs counties to “review all available evidence” to determine whether someone registering to vote is a Georgia resident. Among other things, local registrars may consider whether the applicant has a valid Georgia driver’s license or identification card, whether they have a motor vehicle registered in the state and whether they have paid the required title ad valorem tax on the vehicle as required when moving to Georgia.

United States Senator Kelly Loeffler (R-Atlanta) had mixed results in a series of COVID-19 tests and is self-quarantining, according to the Athens Banner Herald.

Loeffler had self-isolated after getting mixed test results — two negative rapid tests, followed by a both a positive test and another polymerase chain reaction screening that was “inconclusive.”

“Senator Loeffler’s previously inconclusive PCR results were released overnight and the results thankfully came back negative,” said spokesperson Stephen Lawson. Out of an abundance of caution, she will continue to self-isolate and be retested again to hopefully receive consecutive negative test results.

According to her campaign, Loeffler’s two rapid tests Friday morning came back negative and she was cleared to participate in the north Georgia campaign events with Pence.

Later Friday evening, after the event, she was re-tested using the polymerase chain reaction screening, also known as a PCR test, and those results came back positive. She was retested Saturday morning after conferring with medical officials and those results were “inconclusive.”

It’s not yet known how the diagnosis will affect her campaign schedule ahead of a nationally-watched Jan. 5 runoff, one of two Georgia races that will determine control of the U.S. Senate.

Nor is it immediately clear whether Vice President Mike Pence or U.S. Sen. David Perdue, whom she campaigned with on Friday, would have to quarantine. The three appeared together, without wearing masks, at two outdoor rallies in north Georgia, and both said Sunday they are now awaiting her latest test results.

Though Loeffler regularly wears masks, she was not wearing one during her stops with Pence on Friday.

Pence’s office said earlier Sunday he is awaiting a “confirmatory test” from Loeffler and that he’s in regular consultation with White House physicians. Perdue’s campaign spokeswoman Casey Black said he will remain home until Loeffler receives confirmation of her test results.

Stacey Abrams affiliated groups will send nearly $3 million dollars to organizations working to deliver the Democratic vote in the two U.S. Senate runoffs, according to the AJC.

The voting rights group founded by Stacey Abrams is pumping $2.7 million to boost the work of a network of grassroots organizations ahead of the Jan. 5 runoffs – not to finance more TV ads but to strengthen their get-out-the-vote apparatus.

The campaigns and their allies have spent more than $235 million on TV ads for the 2021 contests to decide control of the U.S. Senate, according to media strategist Rick Dent. But the quieter efforts to identify, energize and mobilize voters is getting less attention.

Among the organizations that Fair Fight’s cash infusion will finance includes a number of groups aimed at driving out Black, Hispanic and Asian-American voters who were key to President-elect Joe Biden’s victory in Georgia.

Trump supporters rallied in Savannah, according to the Savannah Morning News.

Approximately 60 supporters of Republican President Donald Trump — a few of them armed with assault rifles and handguns — held a “Stop the Steal” rally in downtown Savannah’s Johnson Square on Saturday afternoon.

Georgia State Senate President Pro Tem Butch Miller (R-Gainesville) has been re-nominated by the Senate Republican Caucus, according to the Gainseville Times.

“For the past two years, it has been both a privilege and honor to serve my colleagues in the Georgia Senate as President Pro Tempore. By working together, we have embraced policies that aim to create a better life for Georgians, promote economic growth and seek to keep Georgia moving in a positive direction,” Miller said in a statement sent by the Georgia Senate Press Office.

“This year has presented many challenges that will require bold leadership throughout the upcoming legislative session. I pledge to work with both sides of the aisle as we work toward one common goal – a healthy and prosperous Georgia for all.” [said Miller].

President Pro Tem is elected by the entire Senate, but the Republican nomination should mean he’s certain to be reelected in January.

Grovetown City Council member Alan Transou has died, according to the Augusta Chronicle.

Transou was a long-time resident of Grovetown. He moved to the city in 2015. He won the special election to replace former councilman Dennis Trudeau in 2017. At the time, his platform included making Grovetown’s recreational parks and fields “equal to” county operated facilities with the help of county funds and seeing more activities “for our seasoned citizens as well as our youngest citizens.” He ran unopposed in the 2019 election.