The Judiciary Act of 1789, which established the first federal judicial system, was adopted on September 24, 1789 with the signature of President George Washington. Under the Act, the original size of the Supreme Court was five Associate Justices and a Chief Justice. Washington nominated John Jay as Chief Justice, and John Rutledge, William Cushing, John Blair, Robert Harrison, and James Wilson as Associates.

The Decatur Female Seminary opened with 60 students on September 24, 1889 and would later be chartered as Agnes Scott College.

White vigilantes seeking to assault African-Americans after reports of four white women being assaulted led to the Atlanta Race Riots on September 22-24, 1906, which would claim the lives of at least 25 African-Americans and one white person.

On September 24, 1960, USS Enterprise CVN-65, was launched from Newport News Shipbuilding in Norfolk, Virginia, the first nuclear-powered aircraft carrier. Enterprise was inactivated on December 1, 2012 and decommissioned on February 3, 2017.

Launched as MicroNET in 1979 and sold through Radio Shack stores, the service turned out to be surprisingly popular, thanks perhaps to Radio Shack’s Tandy Model 100 computers, which were portable, rugged writing machines that dovetailed very nicely with the fledgling, 300-baud information service.

MicroNET was renamed the CompuServe Information Service in 1980. Around the same time, CompuServe began working with newspapers to offer online versions of their news stories, starting with the Columbus (Ohio) Dispatch in 1980. At least 10 major newspapers were offering online editions through CompuServe by 1982, including The Washington Post, the Los Angeles Times, and the San Francisco Examiner.

On September 24, 2009, it was announced that the College Football Hall of Fame would move to Atlanta, where it opened on August 23, 2014.

Nate Silver of 538 is out with new estimates in the Georgia Senate races. 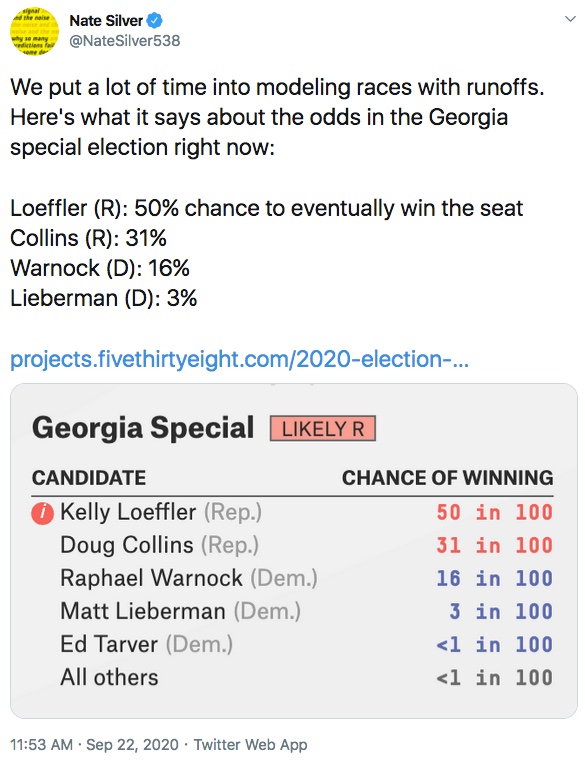 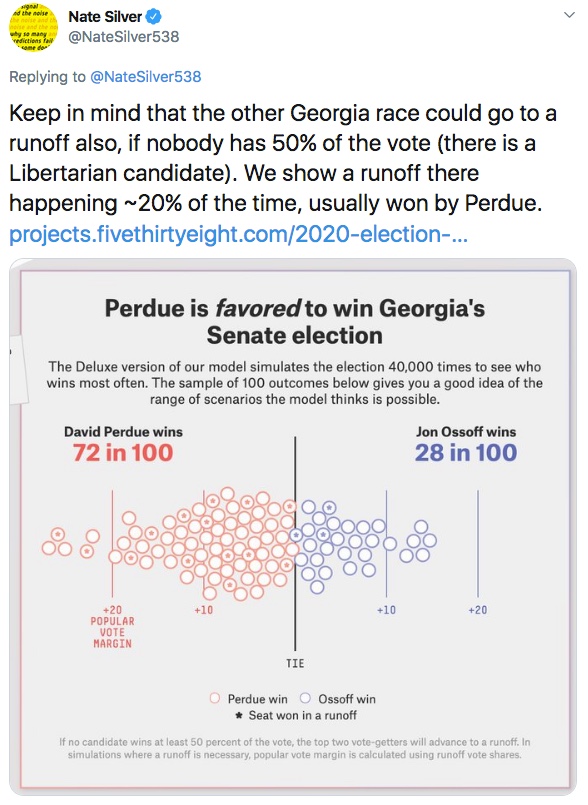 Bourdeaux narrowly lost the district in 2018 to incumbent Republican Congressman Rob Woodall and in February 2019 Woodall announced he would not seek re-election.

“We are very excited to have the endorsement of Vice President Joe Biden,” Bourdeaux said in an exclusive interview with FOX 5. “This district is one of the top prospects for Democratic pickup in the country and it’s a place where we are seeing enormous surges in new Democratic voter turnout and a place where we are looking to put Georgia itself in play. So, this is an important day for us and an important endorsement.”

Bourdeaux said healthcare remains one of the top issues voters in the district care about as the country continues to grapple with the COVID-19 pandemic.

Both candidates are Brookhaven residents and were unopposed in the June 9 primary election. District 80 includes the city of Brookhaven and parts of Buckhead, Sandy Springs and DeKalb County.

The United States Department of Justice opened an investigation into payments by the City of Atlanta to a group controlled by Fulton County District Attorney Paul Howard, according to the AJC.

The U.S. Justice Department has opened a criminal investigation into Fulton County District Attorney Paul Howard and his use of a nonprofit to pad his salary with almost $200,000 in city of Atlanta funds, The Atlanta Journal-Constitution and Channel 2 Action News have learned.

The probe was disclosed in a recent subpoena calling for the production of documents to a federal grand jury in Atlanta on Oct. 6. It was submitted to the city of Atlanta’s law department by the criminal division of the Justice Department’s public integrity section in Washington.

The Georgia Court of Appeals referred an appeal of a Superior Court order to the Georgia Supreme Court, according to the Augusta Chronicle.

In an order released Monday, the appeals court announced it has transferred the city’s appeal of Superior Court Chief Judge Carl C. Brown Jr.’s order to the Georgia Supreme Court.

While it is true that the Court of Appeals is designated at the appellate site for appeals of emergency judicial orders — as Brown’s order was styled — the ultimate question that needs to be decided in the case is an constitutional issue, the order reads. And the Supreme Court has exclusive jurisdiction over cases of constitutional issues, according to Monday’s order.

The legal controversy arose this summer in the middle of the COVID-19 health emergency declared by the governor and the corresponding judicial emergency order signed by Supreme Court Chief Justice Harold Melton that shut down most court proceedings in the state.

On July 24, Brown issued an emergency order that directed the city to pay for the renovations of the former Joint Law Enforcement Center at 401 Walton Way and the Craig-Houghton Elementary School at 1001 Fourth Street. The order mandated the city turn over the properties to Brown’s personally selected set of receivers to oversee the renovation to be completed within 330 and 90 days, respectively.

Absentee ballot requests are up in Camden County, according to The Brunswick News.

“They’re coming in quickly,” she said. “And we’re getting more application requests.”

Nettles said an additional employee has been hired for 10 weeks to help with absentee ballots. Nettles also plans to have 40 new poll workers trained to join the 80 who will work the polls on Election Day.

Things will get even busier when early voting begins Oct. 13 in Camden County. Polls are not opening on Oct. 12, the date designated for the rest of the state, because of Columbus Day. There will be one stretch where the polls will be open 12 consecutive days — Oct. 19-30 — to accommodate voters who want to avoid the long lines when the general election is held Nov. 3.

“Even though we’re getting a bunch of absentee ballots, we’ll still have a big turnout at the polls,” she said.

Absentee ballot drop boxes are being setup across Georgia, according to the Capitol Beat News Service via the Albany Herald.

First rolled out for the June 9 primaries, the secure drop boxes have been installed in roughly three-fourths of Georgia’s 159 counties over the past few months. They are located on government properties like county elections offices, courthouses, city halls and local commissions.

So far, around 1.2 million Georgians have requested absentee ballots for the Nov. 3 election, according to Georgia Secretary of State Brad Raffensperger. State election officials expect to see record turnout for the coronavirus-troubled election.

The drop boxes are anchored to the ground, monitored by constant surveillance video and can only be opened by a team of two poll workers. They will be emptied at least once every 72 hours until Oct. 26, after which they will be emptied every 24 hours.

New Grand Juries will be empaneled, according to the Macon Telegraph.

Officials have been given the OK in the Georgia’s 49 judicial circuits to begin convening grand juries, the panels that decide whether to indict or bring formal charges in most felony cases.

For now, grand juries, which are comprised of 23 people (and up to three alternates) from a pool maybe twice that, will begin meeting in many counties across Middle Georgia as early as next month.

To help carve into the backlog of cases awaiting indictment, Houston County District Attorney George Hartwig plans to convene two grand juries. Each will meet every other Tuesday, most likely beginning the last week in October and running through the end of the year.

Unemployment is down in Hall County, according to the Gainesville Times.

The Hall County area’s jobless rate plunged in August to 3.9%, according to preliminary figures released Thursday, Sept. 24 by the Georgia Department of Labor.

That’s 1.7 percentage points lower than the July rate and drawing closer to Hall’s unemployment numbers before the COVID-19 pandemic. A year ago, the rate was 2.9%.

Additionally, Gainesville saw a monthly increase in jobs and a monthly decrease in initial claims in August, according to [Georgia Labor Commissioner Mark] Butler.

“It is very promising that we continue to see the unemployment rate drop month after month, while the job market gets stronger, evoking positive news for Georgia’s economy,” Butler said. “The state as a whole is leading the nation in competitive unemployment rates, coming in at seventh lowest.”

The Gainesville/Hall County metro is also part of the Georgia Mountains Region, and the region saw an unemployment rate of 3.9%, a drop of 1.6% from the previous month.

The Savannah Ethics Board will consider complaints against Board of Aldermen member Kesha Gibson-Carter , according to the Savannah Morning News.

The complaints against Alderwoman Gibson-Carter were filed on Sept. 1 by Alderwoman Linda Wilder-Bryan and Aldermen Detric Leggett, Nick Palumbo and Kurtis Purtee.

The council members filed the complaint following a closed-door personnel session regarding the hiring of a new city manager.

The City of Valdosta will hire new firefighters and named three new appointees to the board of tax assessors, according to the Valdosta Daily Times.

Columbia County School System Superintendent Dr. Sandra Carraway announced she will retire at the end of the current school year, according to the Augusta Chronicle.

Floyd County Commissioners approved a renovation of part of the State Mutual Stadium with SPLOST funds, according to the Rome News Tribune.

The Gwinnett Place and Sugarloaf Community Improvement Districts will host a forum with the candidates for District 1 County Commissioner, according to the Gwinnett Daily Post.