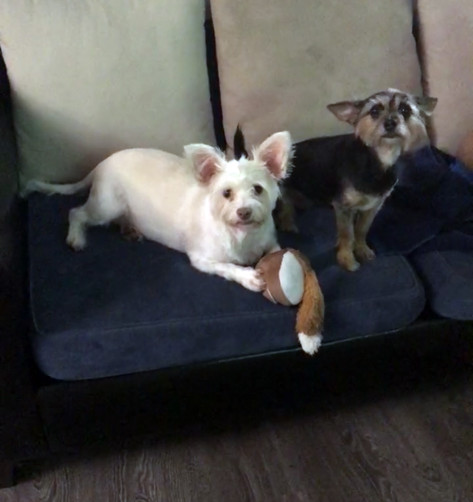 Coco and Daisy are a bonded pair of female Terrier mix dogs who area available for adoption from Mutt Madness in Marietta, GA.

Coco (the white one) is a male. *blind,* literally a live teddy bear, and would cuddle/lay on your lap all day if possible. He tends to still think he is a tiny little puppy and loves to climb all over you and give you kisses.All he needs to get him to him going is a tiny attention and he is all over you. He loves belly rubs and to play with toys. They usually don’t last with him, as he chews through all his toys. But he has lots of fun while the last. He does not like to play fetch, instead he likes to be chased. He likes to show you a toy so you can try and take it from him. He is potty trained but if he has to go he will go inside occasionally. Before he went blind he was over protective with me and did not do well with other dogs. But since he can no longer see I haven’t noticed the same. He tends to do well with kids, so long as they do not hurt him.

Daisy (the black one) is a female. Shes a total princess, she is sassy, loyal, spoiled and always ends up getting what she wants. In her eyes all stuffed animals and toys/balls are hers. She loves to play fetch, she could play fetch all day if possible, never gets tired. She loves car rides, to eat meat and lay in bed under the blankets where she is most cozy. She is potty trained and would never go inside. She is as loyal as a dog can get, she has never so much growled at me. Such a good girl, but is not good with little kids or other dogs. (Until they play fetch with her) Once she knows you and is familiar with you, she is very loyal.

Both are 6 years old spayed/neutered. All of their shots are up to date. During their entire lifetime they have lived indoors, and have never gone an entire day outside, so they are Not outside dogs. 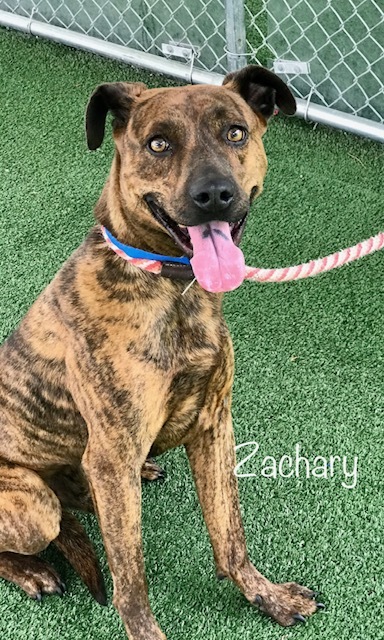 Zachary is an adult male Hound mix who is available for adoption from the Friends of Shelter Animals for Cobb County in Marietta, GA.

Zachary is super sweet and ridiculously cute. He already knows how to sit when told and he is a good boy on a leash. Zachary arrived at the shelter on 7/2/2020 as a lost pup. He is only about 3 years old and he is ready to be adopted into a new loving home. Zachary is current on his vaccines and he is about 39 lbs. He is now neutered, heartworm tested negative and will be microchipped when adopted. His ID at the shelter is 623394 and he is waiting to meet you in run 828. 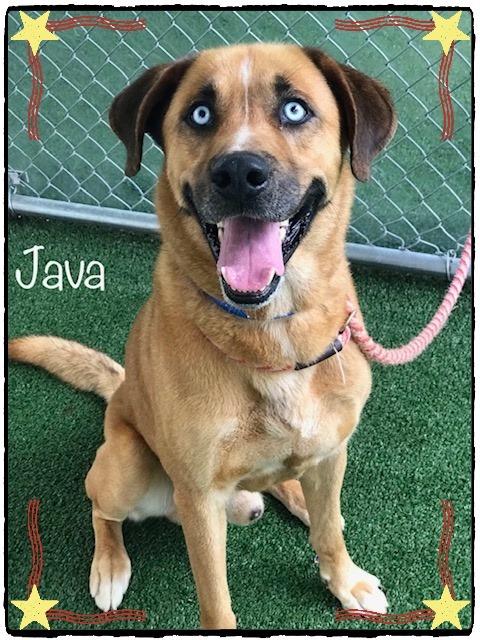 Java is an adult male German Shepherd Dog mix who is available for adoption from the Friends of Shelter Animals for Cobb County in Marietta, GA.

The first thing you’ll notice about Java is his eyes, so bright and blue he could be wearing tinted contacts, and then you’ll take in the rest of his beautiful face. After that, you’ll notice his sweet disposition and a personality that’s as bright as his eyes. Java came to the shelter as a lost dog on June 22 and his family hasn’t come looking for him. He’s about 4 years old and weighs 72 pounds, and will sit when told. Java is up to date on vaccinations, now neutered. He has tested positive for heart worms and will need to be treated for those. Java will get a microchip upon adoption. Find him in Run 804 with ID# 623189.