On March 18, 1766, the British Parliament repealed the Stamp Act, which required American colonists to purchase a stamp for every legal or printed document they obtained.  Revenue would be used to support the British army in America.

The Stamp Act led Patrick Henry to denounce King George III, the British Monarch at the time of the passage of the Stamp Act and the ensuing Revolutionary War; Henry’s later “Give Me Liberty or Give Me Death” speech to the Virginia Assembly at St. John’s Church in Richmond, Virginia, listed by Time magazine as one of the top ten speeches of all time. Henry later opposed adoption of the Constitution, arguing it was incomplete without a Bill of Rights; after the Bill of Rights was adopted, Henry was satisfied.

On March 18, 1939, the State of Georgia ratified the Bill of Rights, which were proposed 150 years earlier in 1789. Georgia initially declined to ratify the Bill of Rights arguing that the first ten amendments to the United States Constitution were unnecessary. Governor E.D. Rivers signed the joint resolution six days later, but under federal court decisions the ratification is marked as of the date the second house of the state legislature adopts the legislation (assuming a bi-cameral state legislature).

On March 18, 1942, the United States government, under President Franklin D. Roosevelt, created the War Relocation Authority to “Take all people of Japanese descent into custody, surround them with troops, prevent them from buying land, and return them to their former homes at the close of the war.” More than 120,000 Japanese Americans, many of them citizens of the United States were moved from the west coast into concentration camps in the western United States.

The 442nd Regimental Combat Team, composed entirely of Japanese Americans, many of whose families were interned at the camps, became the most-decorated unit of World War II, with members being awarded 4,667 medals, awards, and citations, including 1 Medal of Honor, 52 Distinguished Service Crosses, and 560 Silver Stars; eventually 21 members of the 442nd would be awarded the Medal of Honor. The late United States Senator Daniel Inouye, a member of the 442nd from 1941 to 1947, was awarded the Medal of Honor by President Bill Clinton for actions during WWII. First elected to the United States Senate in 1962, Inouye became President Pro Tem in 2010.

A year ago, while on a walk around the neighborhood, I found two old certificates that are often given to political supporters of Georgia’s Governor. Between the, they bear the signatures of all three men who claimed to be Governor during the “Three Governors Affair,” and a total of four Georgia Governors. The one signed by Governor Ellis Arnall (69th Governor of Georgia) also bears the signature of M.E. Thompson, who would later become the first Lieutenant Governor of Georgia and then elected as the 70th Governor. The one signed by Governor Herman Talmadge (71) was also signed by Ernest Vandiver, Jr., who would later serve as Lt. Governor and then as the 73d Governor of Georgia. 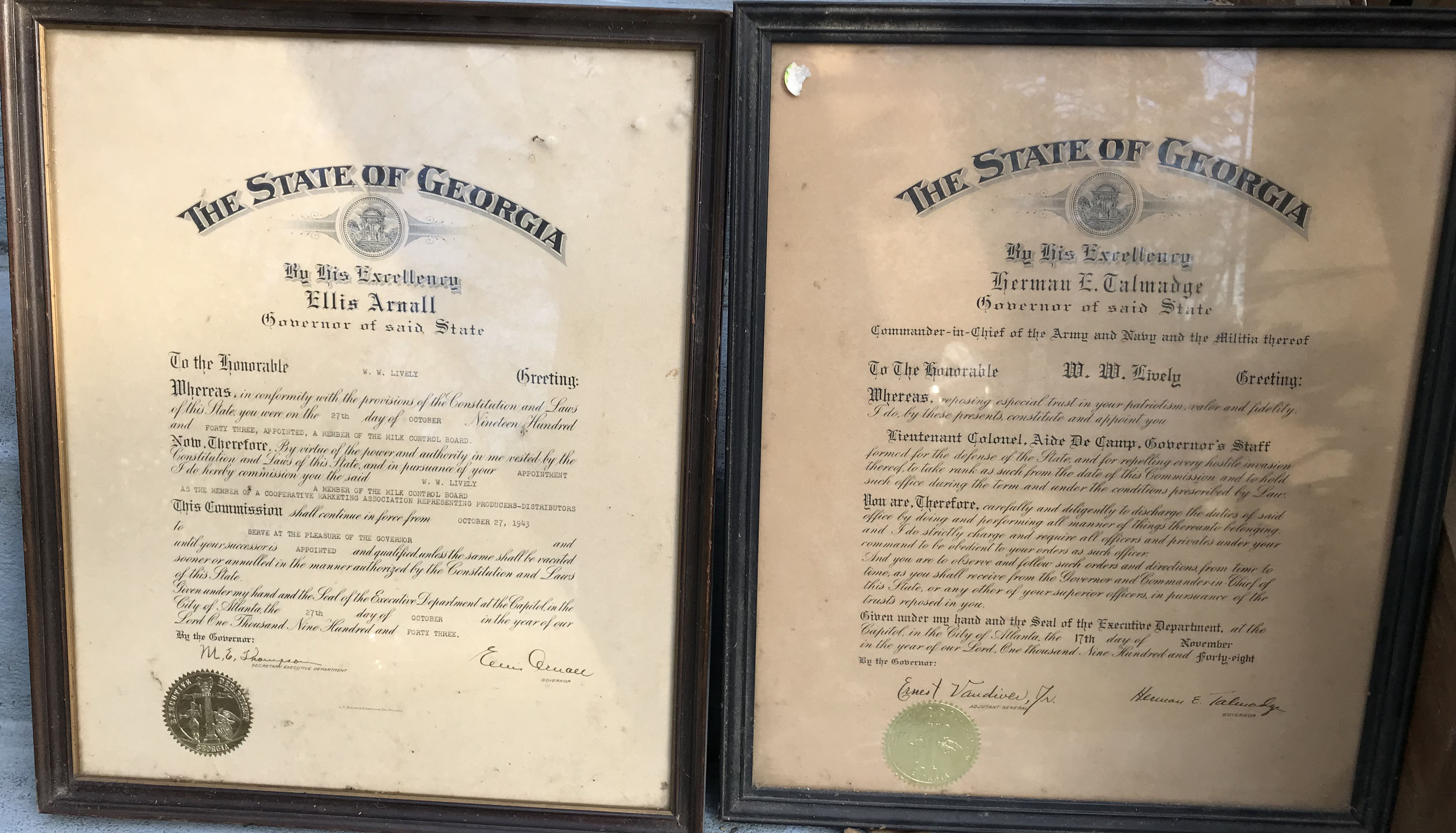 On March 18, 1955, the Georgia Educators Association endorsed “equal but separate” schools for the races.

On March 18, 1961, the United States Supreme Court decided the case of Gray v. Sanders, which arose from Georgia. Three politically-important results come from the case.

First, the Court held that state regulation of the Democratic Primary made the primary election a state action, not merely that of a private organization; thus, the Equal Protection Clause of the Fourteenth Amendment applies.

Second, the Equal Protection Clause requires that every vote be given equal weight in electing officials, often stated as the “one person, one vote” rule. In Georgia at that time, each County had between two and six “county unit votes”. As a result,

Third, because the County Unit System gave the votes of some Georgians greater weight than that of others, it violated the Equal Protection Clause. The “one person, one vote” rule is one benchmark of redistricting.

The State of Georgia has a new COVID-19 hotline. If you believe that you are experiencing symptoms of COVID-19 or have been exposed to the novel coronavirus, please contact your primary care doctor, an urgent care clinic, or your local federally qualified healthcare center. Please do not show up unannounced at an emergency room or health care facility.

The best quote I’ve read from Governor Kemp about his approach to the current crisis comes from this AJC story.

Though the governor has repeatedly urged residents to stay home if they can and avoid public gatherings, he has stopped short of ordering the statewide shutdowns of businesses and events aimed at halting the spread of the disease.

“We can’t just shut things down,” Kemp told radio station Q99.7. “If you overreach, the people would rebel and not heed the warnings you give to them. And a lot of people are listening.”

“It’s a really, really tough call. It will be interesting to see if the federal government steps in,” Kemp said, adding: “Right now, there’s no reason for a statewide mandate. That’s the way we’re going to continue to do things, based on data and advice from healthcare experts.”

The General Assembly passed the $27.5 billion plan covering state spending through June 30 last week shortly before suspending the 2020 legislative session indefinitely because of the coronavirus crisis.

“I applaud the General Assembly’s strong support in these difficult times,” Kemp said in a prepared statement. “Together, we will continue to fight for Georgians to ensure a safe, prosperous future for all.”

The funds addressing the coronavirus emergency will be drawn from the state’s reserves, which stand at a healthy $2.8 billion after plummeting dangerously low during the Great Recession more than a decade ago.

Governor Kemp discussed alleged price gouging due to the Coronavirus, according to the Albany Herald.

“The biggest categories have been with food and water at grocery-type stores, retail outlets,” Kemp said.

There have been 29 cases of price gouging reported to the Attorney General’s Office. Most of those cases were reported to the state on Monday, after a weekend where shoppers rushed to stores to buy supplies amid recommendations of social distancing from the U.S. Centers for Disease Control and Prevention.

“We’re also hearing some interesting things about testing for the coronavirus with certain sites charging up to $300 for the test and the mail-in fee and getting the results back,” Kemp said. “We just want to encourage Georgians that if they feel like they need a test, to please call their doctor and get that information and work out the protocol for doing that.”

“Certainly people can pay for individual tests if they would like, but the information that’s coming from their doctor, from the Georgia Department of Public Health and other government agencies is really the best place to learn about who needs to be tested and where you can go to do that to make sure that you’re not being taken advantage of.”

Gov. Kemp urged Georgians to donate blood, according to the Albany Herald.

“As we continue to mitigate the spread of COVID-19, we must ensure that we maintain the necessary blood supply to aid patients throughout Georgia and across the United States,” Kemp said. “Those who are healthy, without symptoms, and eligible to give blood or platelets should consider doing so.”

“America has faced its challenges before, and when we face them together, we come out stronger. I am encouraging all Georgians to support their neighbors and donate blood as they are able.”

The Red Cross said in a joint statement with the governor that the blood donating process is safe and that healthy donors are needed to address a blood supply shortage and scheduled blood drives should not be called off.

“The Red Cross only collects blood from individuals who are healthy and feeling well at the time of donation and who meet other eligibility requirements, available at RedCrossBlood.org. The Red Cross is also pre-screening all individuals by checking their temperature before they enter any Red Cross blood drive or donation center, including staff and volunteers.”

Gwinnett County Commission Chair Charlotte Nash declared a state of emergency in the county, according to the AJC.

The move gives Nash additional powers to suspend laws, use public property or create temporary housing as necessary, and echoes state and national declarations made in recent days.

The measure also relaxes the county’s normal procurement rules, giving more leeway to acquire supplies it may need to respond to the pandemic. That, Nash told Channel 2 Action News, is the most appealing provision for now.

“We just need more flexibility,” she said. “As we’ve seen over the past two weeks, the situation’s very fluid. It’s evolving.”

The declaration expires April 13, but can be extended.

Augusta Mayor Hardie Davis declared a state of emergency in the city, according to the Augusta Chronicle.

Davis declared a state of emergency in the city Monday, suspending all nonessential services and closing city facilities. He said Tuesday that public transit is essential and must keep running.

“We’ve got to address the issue of transit that needs to continue to go,” he said. “You’ve got people who desperately require transit to get to commerce, whether it’s the grocery store, hospital, prompt care. We have to make sure our government supports that and provides whatever it needs to run.”

Georgia’s Department of Public Health is working to ramp up its COVID-19 testing capacity and sending some tests to private labs, according to the Gainesville Times.

In January, the only testing available in the country was through the Centers for Disease Control and Prevention, said Dr. Kathleen Toomey, commissioner of the Georgia Department of Public Health. But since the Georgia Public Health Lab has gained the ability to test for the virus, more than 420 people have been tested in Georgia, she said.

“We will be increasing the capacity to test additional individuals over the next several days as we continue to get additional equipment and additional staff,” Toomey said.

The state is also sending patient samples for testing to LabCorp and Quest Diagnostics, two private lab companies. The test for COVID-19 is a nasal swab.

The state’s coronavirus task force is working on a partnership with Emory Healthcare that could increase the state’s testing capacity, Toomey said.

While the state can currently process 100 tests a day, that amount could double by the end of the week, Gov. Brian Kemp said on the call.

Carden Summers was sworn in as the new State Senator for District 17, according to the Macon Telegraph.

Carden Summers, a Republican, took the oath of office on March 9 to represent District 13. It includes all of Crisp, Dodge, Dooly, Lee, Tift, Turner and Worth counties and parts of Sumter and Wilcox counties.

The Cumberland Island ferry is shut down due to the coronavirus, according to The Brunswick News.

Private charters to the island are prohibited and valid commercial use authorizations are suspended.

All visitor facilities on Cumberland, including campgrounds, mainland visitor center and store, and all facilities are closed.

Camping reservations have been canceled and refunds will be issued.

Twin Pines Minerals has submitted a revised application for mining near the Okefenokee Swamp, according to The Brunswick News.

In its new application, the Alabama-based company explained its proposed mining technique at an 898-acre tract near the world-famous wildlife refuge using a dragline excavator and conveyor system to transport materials to processing plants. The company wants to conduct a “demonstration mining project” that would show how it removes heavy minerals from the sand.

“This mining technique is different from conventional wet mining which utilizes a dredge and floating concentrator to mine and process heavy mineral bearing sands,” according the 219-page application.