On February 10, 1861, Jefferson Davis of Mississippi received word that he was chosen as President of the Confederate States of America.

On February 10, 1972, David Bowie made his first appearance as Ziggy Stardust.

On February 10, 2015, on the anniversary of the United States House of Representatives passage of the Civil Rights Act of 1964, Gov. Nathan Deal signed legislation proclaiming February as Black History Month.

Governor and First Lady Kemp attended a function at the White House last night, according to his tweets. 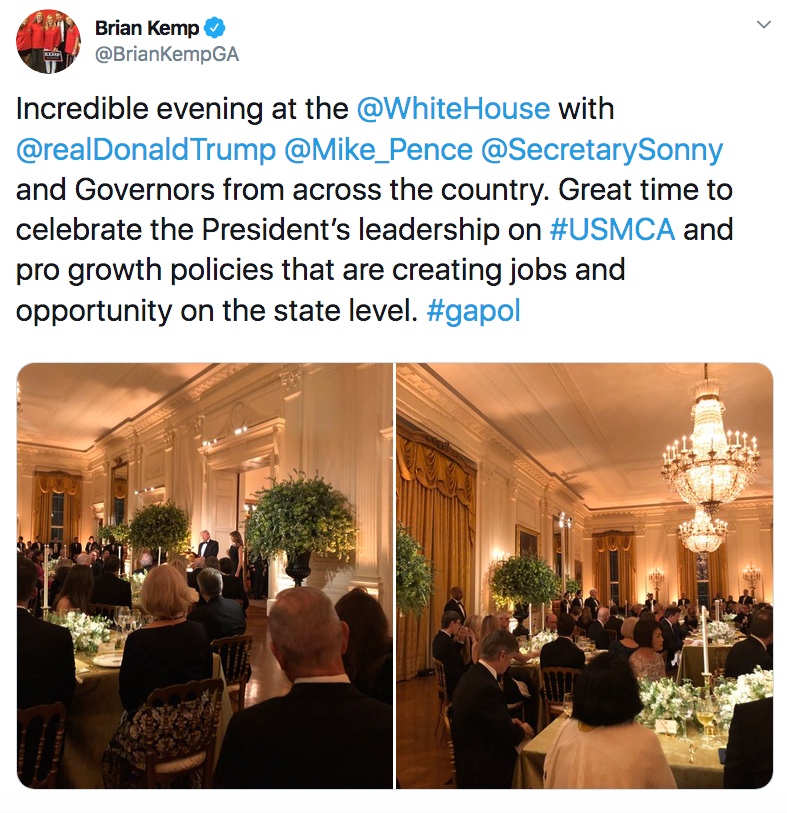 Governor Kemp may have a choice before him after Western Judicial Circuit District Attorney (Athens-Clarke County and Oconee County) announced his resignation effective February 29, according to Patch.com.

District Attorney Ken Mauldin’s announcement last week that he would resign on Feb. 29 rather than retire at the end of his current term in December has scrambled plans for the election of a successor and given Gov. Brian Kemp control over the outcome.

Before that announcement, Deborah Gonzalez and Brian Patterson were contending for the Democratic nomination for district attorney in the May 19 Democratic primary. No one has declared for the Republican Party nomination.

If Kemp makes that appointment by May 3, the state would hold a special election on Nov. 3 to replace Mauldin.

The special election would be without a primary, and Gonzalez, Patterson and any other candidate could run against each other, using the party label she or he chooses.

If Kemp makes the appointment after May 3, the November election would be bypassed, and the district attorney appointed by Kemp would remain in office until an election in November of 2022, when Kemp also is likely to be on the ballot.

If Kemp does not make the appointment by Feb. 29, when Mauldin steps down, Patterson, who currently serves as chief assistant district attorney, would take over the duties of district attorney, according to state law, “u`ntil such official’s successor is appointed or elected and qualified.”

From the Red & Black:

“It was my intent to serve out the remainder of my term, which runs through the end of this year. However, at that time I did not realize the strong pull I would feel to look ahead past my time as District Attorney,” Mauldin said in a Feb. 5 press release. “In the last few months, particularly, I have come to understand that it’s time for this part of my life and career to come to an end and a new chapter to begin.”

In his resignation letter to Gov. Brian Kemp, Mauldin urged the governor to “promptly” appoint a successor in light of the upcoming election for the District Attorney’s office this May.

House Bill 911, sponsored by Rep. Ed Setzler, R-Acworth, would add “improper sexual contact” by a foster parent with a foster child to a section of the state code that deals with sexual misconduct by an employer with an employee.

Foster parents convicted of the most serious form of the offense could face prison sentences of up to 25 years and fines of up to $100,000.

“This legislation closes a dangerous loophole and prohibits foster parents from engaging in improper sexual behavior with children in their care,” [First Lady Marty Kemp] said in a prepared statement. “Moving forward, we will continue to devote our efforts to protecting the most vulnerable in our state from sexual misconduct.”

Senate Bill 319, hereby dubbed “the dam bill,” would change standards for dams in Georgia, according to the Statesboro Herald.

Senate Bill 319 would allow for homes and other inhabitable structures to be built in a dam’s inundation zone — the area that would be flooded if the dam fails — without causing the dam to be recategorized and required to meet higher safety standards. The structures would have to be built to withstand a breach of the dam and receive certification from an engineer approved by the state Environmental Protection Division’s Safe Dams Program.

The bill’s sponsor, Republican State Sen. Frank Ginn of Danielsville, said it would protect dam owners from having to choose between taking on costly upgrades or removing a dam. The proposal, passed Tuesday by the Senate Natural Resources and Environment Committee, could soon go to the full state Senate for a vote.

Under current Georgia regulations, any dam with a home or other inhabitable structure in its inundation zone is considered a Category I dam, meaning its failure would result in probable loss of human life.

Category I dams must undergo regular inspections and meet certain requirements. A Category II dam is any dam that does not have inhabitable structures in its inundation zone, meaning that failure would likely not result in loss of human life. Category II dams don’t have to meet any regulatory requirements, though they are re-inventoried once every 5 years to ensure that the dam still exists and is still properly classified, according to the state Environmental Protection Division.

The proposal would essentially allow homes and other inhabitable structures meeting certain standards to be built in the inundation zone of a Category II dam without it needing to be reclassified as a Category I dam.

Gov. Kemp’s proposal to reduce standardized testing is being supported by some local officials, according to the Forsyth County News.

“I think anything that reduces the stress and anxiety that our students, teachers and families are feeling is a very positive thing,” Rice said.

Kemp and Woods said their plan was aimed at addressing just that, and it would do so by cutting the length of state tests and evaluating local tests that Georgia’s 181 school districts give to measure student progress.

“When you look at the big picture, it’s clear Georgia simply tests too much,” Kemp said at a Tuesday news conference. “On test days it’s making students physically sick because they’re worried they will not do well. That is simply unacceptable in our state.”

Rep. Doug Collins is attacking Sen. Kelly Loeffler in online ads, according to The Hill.

In a 30-second ad posted on Twitter, Collins’s campaign hits Loeffler for donating “nearly $1 million” to Romney when he was a presidential candidate while contributing “NOTHING” to President Trump’s campaign in 2016.

“Loeffler’s big money talks: but it was silent for Donald Trump,” Collins wrote in a tweet accompanying the video.

A spokesman for Loeffler’s campaign pushed back on Collins’s ad, saying, “Desperate, baseless attacks will not distract Senator Loeffler from supporting President Trump’s agenda and fighting for Georgians.”

State Sen. Renee Unterman (R-Buford) released a list of endorsements in her campaign for the 7th Congressional District seat being vacated by Rep. Rob Woodall, according to the Gwinnett Daily Post.

One key takeaway from the list of endorsements, however, is that she has also been endorsed in the race by 13 of Gwinnett’s 16 mayors.

Gov. Kemp’s reelection campaign has more than $5 million in the bank, according to the AJC.

If Kemp winds up facing Democrat Stacey Abrams again in 2022, he will need the money. The 2018 matchup between the two was the most expensive gubernatorial race in Georgia history.

Abrams’ campaign alone reported spending about $27 million, the most by any gubernatorial candidate in state history.

While Kemp raised most of his money from Georgia, Abrams’ campaign developed a nationwide fundraising machine. That trend has continued, with Abrams’ voting rights group Fair Fight having pulled in almost $20 million since her defeat, largely from out-of-state donors.

From the Atlanta Voice:

However, Kemp’s war chest pails in comparison to his rival, Democrat Stacey Abrams. Abrams has raised $1.2 million in January, and the political action committee for Fair Fight Action, the organization Abrams started after losing the 2018 governor’s race, now has almost $12 million in the bank, according to disclosures filed Friday.

Fair Fight Action has raised $20 million since its formation in the wake of Abrams’ close loss to Governor Kemp.

Elsewhere in the AJC:

The haul left the group, which advocates for fair elections, with almost $12 million in the bank, according to disclosures filed Friday.

Abrams shifted $1 million from her campaign to the group after ending her bid to contest Kemp’s election.

Almost all of the money from those who contributed $100 or more came from outside of Georgia. Fair Fight has received strong support from out-of-state donors, as did Abrams’ campaign.

Rep. Lucy McBath (D- GA-6) raised more than $2 million dollars for her reelection, according to the Rome News Tribune.

McBath has reported just over $2.3 million in contributions for her campaign so far, out-fundraising nearest rival Republican and former U.S. Rep. Karen Handel, R-Roswell, by over a million dollars.

Handel, whom McBath ousted in 2018 by just under 3,000 votes to take the traditionally Republican seat, has reported just over $1 million in campaign contributions to date.

Fort Benning is a finalist for an Army leadership headquarters, according to the Ledger-Enquirer.

The post was recently selected as a finalist for the Army’s fourth corps headquarters, which is needed to fulfill requirements of the National Defense Strategy, according to a statement from U.S. Sen. David Perdue’s office.

In a letter to Secretary of the Army Ryan McCarthy, both Perdue and Sen. Kelly Loeffler lobbied for the military branch to select Benning, touting its “unmatched training, support, and command facilities and its ability to quickly activate the new headquarters.”

“Fort Benning is a crown jewel of the Army uniquely qualified to host the new corps headquarters,” the senators wrote. “As the home to the Army’s Maneuver Center of Excellence, Fort Benning provides unmatched training, support and command facilities. It includes 26 million square feet of facilities and 102,000 acres of maneuver training areas capable of supporting all manner of maneuver operations, tactics, and training.”

As work continues on the final phase of the the Savannah Harbor Expansion Project, Sen. Kelly Loeffler has requested $93.6 million in funding to be included in the Trump administration’s fiscal year 2021 budget.

In a letter to Director of the Office of Management and Budget Mick Mulvaney and Acting OMB Director Russell Vought, Loeffler said the requested funding for SHEP, combined with a total investment of $301 million from the state of Georgia and $130.28 million in federal funding from the FY2020 budget, would keep the project on track.

“As one of the largest in the nation, the Port of Savannah plays a crucial role in Georgia’s economy as well as the United States’ overall economy,” said Loeffler. “Maintaining robust funding for this project is imperative to continuing the economic development we have seen as a country throughout the Trump administration. I am grateful to the administration for their contribution to SHEP in 2020, and I look forward to working with the president in making sure this critical project remains a priority not only for Georgia, but for the country.”

Former Sen. Johnny Isakson, whom Loeffler recently replaced following his resignation due to health problems, along with Sen. David Perdue and U.S. Rep. Buddy Carter have all pushed to secure full capability funding to keep SHEP on track in past years.

A 2019 purge of the state’s voter registrations removed thousands of voters from the official rolls in Glynn and Camden counties and several hundred from the rolls in McIntosh County.

In Glynn County, 3,231 registrations, or roughly 5 percent of the county’s total, were deleted, leaving the number of registered voters at 62,346.

Of those subtracted from the list in Glynn County, 1,055 had mail returned as undeliverable, 1,500 made no contact with elections officials and 676 moved out of the state.

In McIntosh County, 312 of the county’s 9,680 registrations were removed from the official rolls, or about 3 percent.

According to the state documents, 122 were canceled due to returned mail, 87 for no contact and 103 because of an address change.

According to documents from the office of Georgia Secretary of State, 34,499 Camden residents were registered to vote as of Feb. 1.

With 2,635 Camden voters removed from the rolls last year, the county saw a 7 percent reduction in total registrations.