On December 16, 1773, the Sons of Liberty, led by Patriot Sam Adams, boarded three British ships in Boston harbor and threw tea worth $700,000 to $1 million in today’s money into the water in what came to be known as the Boston Tea Party. 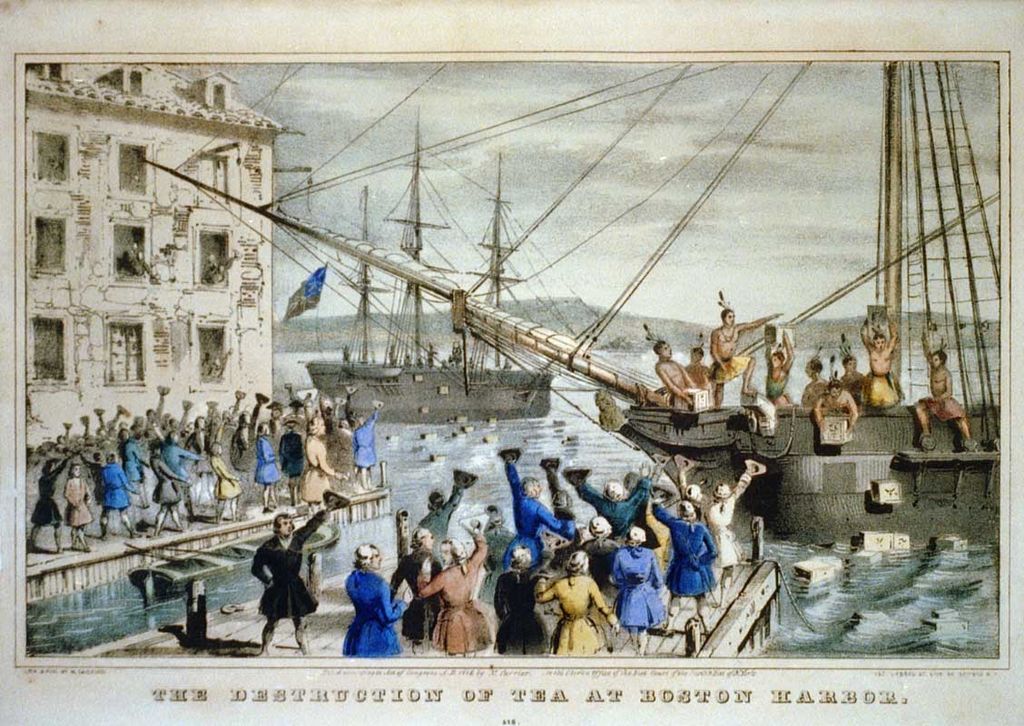 Governor George Towns signed legislation on December 16, 1847 to build a State School for the Deaf and Dumb. The institution now known as the Georgia School for the Deaf was begun with a log cabin, $5000 from the legislature and four students and is still in operation in Cave Spring, Georgia.

On December 16, 1944, a German counterattack in the Ardennes region of Belgium created a “bulge” in Allied lines with particularly difficult fighting near the town of Bastogne. During the Battle of the Bulge, 89,000 Americans were wounded and 19,000 killed in the bloodiest battle fought by the U.S. in World War II. National Geographic has an interesting article published for the 70th Anniversary of the Battle.

President Jimmy Carter announced on December 16, 1976, that he would name Andrew Young, then serving as Congressman from Georgia’s Fifth District, as the United States Ambassador to the United Nations.

Quick, someone alert Governor Stacey Abrams! Georgia Secretary of State Brad Raffensperger’s office is moving forward with a legally-mandated purge of inactive voters, according to the (Minneapolis) Star-Tribune.

Secretary of State Brad Raffensperger in October released a list of over 313,000 voters whose registrations were at risk of being cancelled, about 4% of the state’s total registered voters. Those voters were mailed notices in November and had 30 days to respond in order to keep their registration intact.

Walter Jones, a spokesman for the secretary of state’s office, said the purge would take place overnight Monday into Tuesday. He said the exact number and names of voters removed wouldn’t be known until then and that more information would be made available after.

Voter purges in Georgia became a hot-button issue during last year’s race for governor between Democrat Stacey Abrams and Republican Brian Kemp, who won the race. Kemp served as secretary of state before being elected governor and oversaw some of the most aggressive voter purges in the country during his tenure. Over 1.4 million voter registrations were canceled in Georgia between 2012 and 2018.

In an alternate universe, Georgia’s other Governor, Brian Kemp proclaimed this December as North Atlantic Right Whale Awareness Month, according to the Savannah Morning News.

The North Atlantic right whale, a highly endangered species that spends the winter months in Georgia’s warm offshore waters, has been Georgia’s state marine mammal since 1985 after Delta pilots volunteering their time and private planes helped discover whales giving birth off the coast.

As the proclamation notes, “the right whale migrates from its feeding grounds in the North Atlantic to Georgia and North Florida coastlines to give birth to calves, meaning that Georgia’s ocean territory serves as a critical nursery habitat for vulnerable young and mother whales.”

Savannah resident Paulita Bennett-Martin, the Georgia campaign organizer for Oceana, acted as a required in-state sponsor for the proclamation, along with the Georgia Conservancy and several other local residents.

“It’s so important that North Atlantic right whales are getting recognition across the state. We commend Gov. Kemp’s proclamation, because it reminds us of how serious their struggle to survive is and how much work must be done to save them,” Bennett-Martin wrote in an email. “A lot of people are working across disciplines to see to a safe future for Georgia’s official state marine mammal, and recognizing this in the start to their calving season off our coast is a great thing — a real welcome home for the whales.”

Former Governor Nathan Deal will teach at University of North Georgia beginning in the next semester, according to AccessWDUN.

Former Gov. Nathan Deal will be teaching a political course at the University of North Georgia during the spring semester, which begins early next year.

Nathan Deal spoke several times to UNG classes this fall and as a Regents professor will teach a special topics course, “Politics in the Peach State,” in spring 2020.

“The excellent part of this course will be the opportunity to not only learn about Georgia politics from the former governor’s perspective but to hear from other important figures in Georgia state politics,” said Dlynn Williams, department head of Political Science and International Affairs at UNG. “This experience will greatly enhance the networking possibilities for UNG political science students.”

“It is a tremendous opportunity for our students not only to learn from the experiences former Gov. Deal can share from his long, successful career, but also to interact with him in a smaller classroom setting where they can ask questions and explore topics in-depth with him,” said Dr. Chaudron Gille, provost and senior vice president for academic affairs at UNG.

Republican Marjorie Taylor Greene has withdrawn from the campaign for the Sixth Congressional District and switched to running for the Fourteenth District, which is being vacated by Congressman Tom Graves (R-Ranger).

State Rep. Colton Moore (R-Trenton) is considering a campaign for the Fourteenth Congressional District, according to a Press Release.

Representative Colton Moore from Georgia District 1 announced that he is considering a run for the United States House of Representatives. Rep. Moore would be running for Georgia’s 14th Congressional House seat which is currently filled by Congressman Tom Graves. This comes from Rep. Moore as Congressman Graves recently announced he would not be seeking re-election.

“As a citizen of Northwest Georgia for 25 years, it has been a privilege to work in Atlanta for Dade and Walker Counties. Each day, we continue to execute our vision of a strong, open-minded voice for every person in District 1, no matter the issue. I believe our next Member of Congress must be able to deliver this same boldness and I felt the time was right to explore this great honor,” said Rep. Colton Moore.

Outside of politics Rep. Moore is an expert auctioneer. He regularly travels to Europe, Japan, the Philippines and across the United States to deliver his chant for farmers, heavy-equipment dealers and charities. He was the Georgia Auctioneer Champion in 2016 and was a finalist at the International Auctioneer Championship in 2016 and 2017.

“If our community believes this is the right next step, it would be my job to find a fearless Representative to continue moving District 1 forward. Someone like Dr. David Bosshart of Walker County, I believe, could do very well for us in this position. Only then would it be possible to take part in the incredible honor of expanding our freedoms and economic progress in Washington with one of the greatest visionaries our country has even seen, President Donald Trump,” Moore concluded.

The Rome News Tribune writes about local legislators’ involvement with study committees ahead of the next legislative session.

They’re looking at loosening restrictions on PAs and APRNs — such as nurse practitioners and nurse midwives — with an eye to expanding access to medical care. The committee meeting, set for 2 p.m. Tuesday in the State Capitol, will be livestreamed through the Senate website.

Rep. Eddie Lumsden, R-Armuchee, is finishing his third year on the House Rural Development Council, an ongoing initiative to increase opportunities in the less-populated areas of the state.

The Cherokee County Board of Education opposes legislation that creates vouchers for parents of students eligible to attend public schools, according to the Cherokee Tribune & Ledger News.

The board voted unanimously to adopt the Georgia Education Coalition’s 2020 legislative priorities, which are closely aligned with the board’s own priorities and include opposition to any state legislation that takes money away from local school districts in the form of vouchers or tax credits to pay for private school tuition and other educational programs.

School Board Chairwoman Kyla Cromer spoke against voucher bills, referencing the Georgia Educational Scholarship Act sponsored by state Rep. Wes Cantrell (R-Woodstock). House Bill 301 and Senate Bill 173 would use state general fund money allocated for local school districts to establish “education scholarship accounts” for parents to pay for expenses including private school and college tuition, textbooks and online courses. The bill was introduced in the House last February and has not come to a vote there; in the Senate, the bill failed to get majority votes in March.

Cantrell said in an email to the Tribune that the bill is designed to give parents options when their child isn’t succeeding in the public school assigned to them.

“The purpose of the bill is to provide educational choice for that small percentage of students who are not performing well in the public schools they are districted for. One size does not fit all, especially when it comes to education. The Act would allow parents some flexibility in using their tax dollars for an educational program that could be more strategically designed for the specific needs of their child,” he said.

The Bulloch County Board of Education will not propose property tax relief for seniors, according to the Statesboro Herald.

The Bulloch County Board of Education is not sending forward any proposal for a 2020 referendum to create a local school-funding property tax exemption for senior citizens.

Back in July, a group of about 80 people, most of them age 60 and up, met with state Rep. Jan Tankersley, R-Brooklet, who told them an exemption request would need to come from the local school board in time to be acted on by the Georgia General Assembly in its January-March session if it was to be returned to local voters in a referendum next year. Spokespersons for the seniors group then spoke to the school board in August, but so did a number of citizens opposed to creating such an exemption. The board had its own discussion in September.

The Macon Telegraph reports that more than 100 local businesses could lose their liquor licenses after a change to the local alcohol ordinance.

More than 100 Macon businesses are in jeopardy of losing their alcohol licenses as of Jan. 1 unless the law is changed.

The Macon-Bibb County Commission amended the alcohol code last year and set the license expiration date as Dec. 31 to align with the Georgia Department of Revenue.

Applicants can apply as early as Sept. 1, but as of Dec. 6, only 270 of the approximate 400 establishments which sell alcohol in containers or by the drink have applied for renewal, said Bibb County Commissioner Virgil Watkins. That means about a third of the county’s businesses might not be able to serve or sell after the clock strikes midnight on New Year’s Eve.

The 2018 change in the code also eliminated the grace period of up to 90 days that would allow businesses to continue to sell alcohol before the license is pulled.

Hoschton Mayor Theresa Kenerly has resigned ahead of a recall election, according to the Gwinnett Daily Post.

The Gwinnett Place Community Improvement District voted for a license plate reader system, according to the Gwinnett Daily Post.

The board of directors for the Gwinnett Place Community Improvement District announced a multi-year partnership with Flock Safety this past week to install a “large number” of automatic license plate reading cameras in 2020 with the option to add more.

“We exist for our businesses to flourish,” CID Board Chairman Leo Wiener said. “And that’s possible thanks to partnerships with the Gwinnett County Police Department and investment in crime-fighting technology like Flock Safety.”

Flock Safety is an Atlanta-based company that was started by Georgia Tech graduates in 2017. Its automatic license plate reading — or ALPR — camera system is the only one built specifically for neighborhoods, businesses and law enforcement, according to the CID.