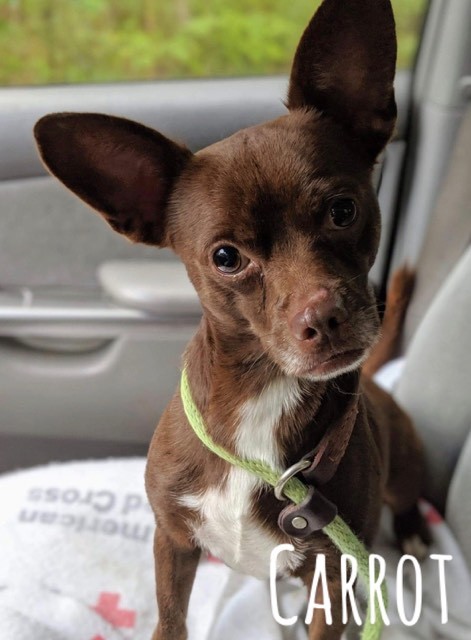 Carrot is a young male Chihuahua and Terrier mix who is available for adoption from BarkVille Dog Rescue in Roswell, GA.

Carrot is a sweet & friendly Chi/Terrier mix who is 2 years old & weighs 12 lbs. He is a teeny tiny little guy in need of an immediate foster or adopter so that he can have a safe & loving home for the holidays! Carrot is a playful, affectionate, social young boy who is good with people & other dogs! He will make a great companion for the very lucky person/family who adopts him.

Carrot is housebroken, crate trained, neutered, fully vaccinated & microchipped. He is currently being fostered in GA, but can also be available for adoption in the northeast. 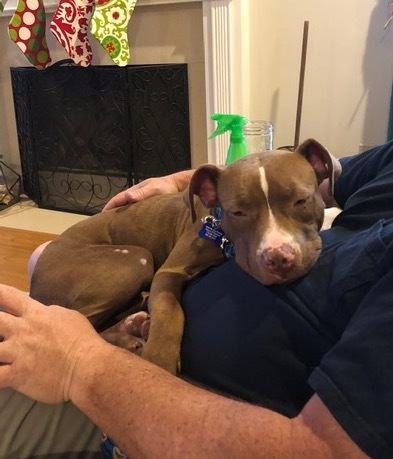 Sully is a young male Terrier mix who is available for adoption from BarkVille Dog Rescue in Roswell, GA.

Sully is a sweet & affectionate pitbull puppy who is about 10 months old and weighs 35 lbs. He is an adorable, social, friendly young boy who is everything a puppy should be … happy, curious, comical, and playful! He has puppy energy, so he’ll need lots of exercise, chew toys, and corrections if he gets mouthy during play time (especially at long shirt sleeves or shoelaces) … but there’s nothing he loves more than snuggling after walks & being close to his humans.

Sully’s foster mom says he does the cutest little happy dance when he sees her filling up his food bowl … he leaps & dances right into his crate where he waits to be fed. He is still learning his leash manners and does pretty well on walks, but his foster mom says he’ll pull if he sees something interesting like a squirrel or bunny so she’s been walking him with the gentle leader and his pulling has improved greatly. 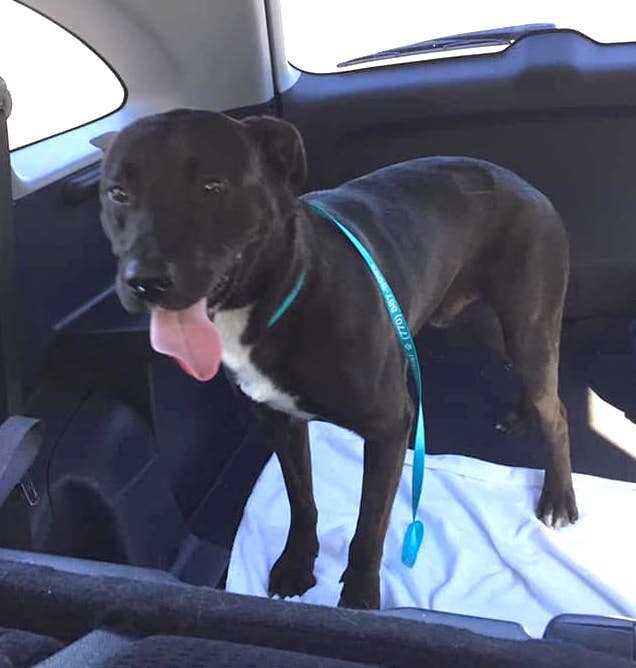 Grady is a young male Labrador Retriever mix who is available for adoption from BarkVille Dog Rescue in Roswell, GA.

Grady is an adorable, affectionate Black Lab/Terrier mix who is 2 years old and weighs 50 lbs. He was very shy at the shelter, but fortunately BarkVille was able to place him in a wonderful foster home where he has really come out of his shell and regained his confidence. His foster mom says he is completely precious … a happy, playful, social dog who likes to play hard, and then happily curls up in his crate to sleep.

Grady loves people, other dogs, and car rides. He walks well on a leash, knows basic commands, and is a sweet, gentle, loving boy. He really enjoys playing with other dogs so a home with another playful dog would be ideal, although he’d be fine as an only dog with an active person/family who will give him the exercise & attention he deserves!

Two Girl Scouts from Lilburn raised $1200 to support a veteran’s assistance dog, according to the Gwinnett Daily Post.

After nine months of abstract planning and gathering donations, fifth-graders Cierra Thomas and Kaitlyn Crowe were able to witness the real benefits of their community service project.

The completion of the project granted Cierra and Kaitlyn their bronze awards, the highest possible honor for Girl Scout Juniors. It also gave U.S. Army veteran Paul DiPaolo and his service dog, Duce, a new harness, a flea and tick collar and premium dog food that lift almost a year’s worth of financial burden off the soldier’s back.

“We’re excited to be able to show people what we’ve done and tell people about this amazing foundation,” Cierra said. “(Top Dogg K9 Foundation) is a great foundation if you’re a veteran and you want to train your service dog.”

What the Lilburn girls scouts were able to drum up in a matter of months was not mere pocket change. Cierra and Kaitlyn set out with a goal to raise $300 to support a veteran and their dog who were training with Top Dogg K9 Foundation in Stone Mountain. The total they finally accumulated was roughly four times that projected amount — $1,200.

DiPaolo joined the U.S. Army in 2010 and served for seven years. He was deployed in 2009 when he was injured jumping out of a helicopter during a training exercise. He said people he met through Wounded Warrior Project helped give him a sense of purpose and a reason to be excited about his future. He and his wife, April, moved to the Atlanta area with their son, A.J., when he decided to go to graduate school.

“It helps me financially and helps me with all of his nutrition, because he requires a lot of protein,” DiPaolo said.