By the President of the United States of America, a Proclamation.

Whereas it is the duty of all nations to acknowledge the providence of Almighty God, to obey His will, to be grateful for His benefits, and humbly to implore His protection and favor; and—Whereas both Houses of Congress have, by their joint committee, requested me “to recommend to the people of the United States a day of public thanksgiving and prayer, to be observed by acknowledging with grateful hearts the many and signal favors of Almighty God, especially by affording them an opportunity peaceably to establish a form of government for their safety and happiness:”

Now, therefore, I do recommend and assign Thursday, the 26th day of November next, to be devoted by the people of these States to the service of that great and glorious Being who is the beneficent author of all the good that was, that is, or that will be; that we may then all unite in rendering unto Him our sincere and humble thanks for His kind care and protection of the people of this country previous to their becoming a nation; for the signal and manifold mercies and the favor, able interpositions of His providence in the course and conclusion of the late war; for the great degree of tranquillity, union, and plenty which we have since enjoyed; for the peaceable and rational manner in which we have been enabled to establish constitutions of government for our safety and happiness, and particularly the national one now lately instituted; for the civil and religious liberty with which we are blessed, and the means we have of acquiring and diffusing useful knowledge; and, in general, for all the great and various favors which He has been pleased to confer upon us.

And also that we may then unite in most humbly offering our prayers and supplications to the great Lord and Ruler of Nations, and beseech Him to pardon our national and other trangressions; to enable us all, whether in public or private stations, to perform our several and relative duties properly and punctually; to render our National Government a blessing to all the people by constantly being a Government of wise, just, and constitutional laws, discreetly and faithfully executed and obeyed; to protect and guide all sovereigns and nations (especially such as have shown kindness to us), and to bless them with good governments, peace, and concord; to promote the knowledge and practice of true religion and virtue, and the increase of science among them and us; and, generally, to grant unto all mankind such a degree of temporal prosperity as He alone knows to be best.

Given under my hand at the City of New York the third day of October in the year of our Lord 1789.
Go. Washington

On November 27, 1864, Sherman ordered the courthouse in Sandersville, Georgia burned.

[I]t was not until 1863, when President Abraham Lincoln declared Thanksgiving to fall on the last Thursday of November, that the modern holiday was celebrated nationally.

With a few deviations, Lincoln’s precedent was followed annually by every subsequent president–until 1939. In 1939, Franklin D. Roosevelt departed from tradition by declaring November 23, the next to last Thursday that year, as Thanksgiving Day. Considerable controversy surrounded this deviation, and some Americans refused to honor Roosevelt’s declaration. For the next two years, Roosevelt repeated the unpopular proclamation, but on November 26, 1941, he admitted his mistake and signed a bill into law officially making the fourth Thursday in November the national holiday of Thanksgiving Day.

Click here to check your voter registration and for early voting locations.

According to the Secretary of State’s absentee voter list, 46,407 early votes have been processed by local boards of elections.

Early voting started yesterday in the Runoff Elections for Secretary of State and Public Service Commission, according to WTOC.

The early voting period will last until Friday, Nov. 30.

One of the biggest statewide runoff races is for the position of Secretary of State.

Republican Brad Raffensperger and Democrat John Barrow are locked in a tight race to see who will replace Robyn Crittenden as secretary of state. Crittenden was appointed by Georgia Governor Nathan Deal to fill the remaining term of governor-elect Brian Kemp.

“Because of the historic turnout we had for the general, we’re preparing for a big turnout for this one,” said DeKalb Elections Director Erica Hamilton.

Hamilton said while she does not expect to see anywhere near the 60-plus percent voter turnout seen in the general election, her office expects far better than the 14-percent average turnout for past runoffs.

She has a message for DeKalb County voters:

“Whether you vote on Election Day or absentee, your ballot will count, and if you have any questions, please ask us in advance, please check your voter status,” she said.

Also from the AJC:

Unlike the general election, there’s no requirement for early voting on a Saturday before the runoff.

All registered voters are eligible to participate in the runoff election, even if they didn’t cast ballots Nov. 6. The voter registration deadline for this year’s election was Oct. 9.

From the Henry Herald:

Election Day is Dec. 4, and voters can cast their ballots at their regular polling precinct.

From the Brunswick News:

The Glynn County Board of Elections originally planned to open the polls on Wednesday, but Elections and Registration Supervisor Monica Couch said election workers were able to open earlier.

As long as there are no federal runoffs on the ballot, state law provides no deadline for a early voting in a runoff for state and local seats to begin, only saying it should begin “as soon as possible.”

Democrat John Barrow and Republican John Raffensperger are facing off to become the next Georgia Secretary of State, while Republican incumbent Chuck Eaton and Democrat challenger Lindy Miller are seeking a seat on the Public Safety Commission. Libertarian candidates in both races did not receive enough votes to qualify for the runoff.

The polling places are located in the Office Park Building, 1815 Gloucester St. in Brunswick, and in Glynn County Fire Station No. 2, 1929 Demere Road on St. Simons Island. 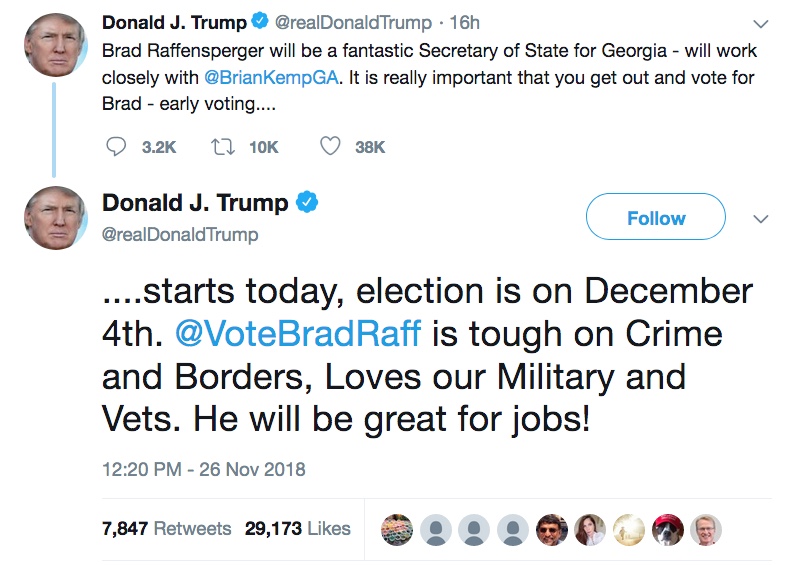 Republican Kemp, who will take office in January, opposed Medicaid expansion during the campaign, while Democratic candidate Stacey Abrams strongly supported it. Gov. Nathan Deal and his fellow Republicans who control the Georgia General Assembly have resisted expansion since it became an option for states several years ago.

But there may be other health care ideas coming under a Kemp administration that can bring coverage to more Georgians. And those ideas come under the general heading of “waivers.’’

A Kemp administration, meanwhile, could pursue one or more waivers that fall short of full expansion. States can propose waivers to change their health care programs under the Affordable Care Act. Such changes must receive federal approval.

Kemp’s move to add Tom Price, a former U.S. secretary of health and human services, to the gubernatorial transition team could pave the way for such a waiver plan, says Kyle Wingfield of the Georgia Public Policy Foundation.

The Price addition may mean ‘’the Kemp team understands they need to do something on health care,’’ Wingfield said Monday. “We would say that bringing in someone like Tom Price indicates that they get that and they’re looking for someone who’s very familiar with how HHS works.’’

The Statesboro Herald writes that Democrat John Barrow has an uphill fight against Republican Brad Raffensperger in the runoff election.

Unless affected by court decisions lingering from the dispute over the governor’s race, in-person early voting will be available Nov. 26-30 in the general election runoff. A runoff for a seat on the Public Service Commission will also appear on the statewide ballot.

“We haven’t had many statewide general election runoffs,” said University of Georgia Political Science Professor Charles S. Bullock III, Ph.D. “But there were two for the U.S. Senate and two or three for the Public Service Commission, and one consistency has been that Republicans won every one of those.”

In Georgia’s statewide general election runoffs, the Republican has consistently won, whether initially in the lead or in second place, Bullock said.

“So what that tells you is that, at least in the past, Republicans have been more successful in getting their voters to come back for that second vote,” Bullock said.

Barrow, in a phone interview Friday, observed that the 2018 election season has been markedly different than those that produced statewide runoffs in the past.

“I think there are so many differences between this climate right now and what happened in 2008 and what happened in 1992, I wouldn’t know where to begin,” Barrow said. “But I know this. This is an equal-opportunity challenge for both sides in this race, and there are lots of problems that need to be fixed and there is only one candidate running in this race that has promised to fix these problems in a bipartisan manner.”

Georgia’s Nick Ayers could be in line to be the next White House Chief of Staff, according to the AJC.

Chatham County Board of Assessors Vice Chairman Tommy Boondry was arrested and charged with possession of cocaine and methamphetamine, according to the Savannah Morning News.

The Chatham County Board of Assessors is responsible for notifying the public of changes in property tax law.

Chief Appraiser Roderick Conley said the Board of Assessors has no comment on the arrest, and the board is investigating the matter.

Whitfield County‘s 2019 budget includes a $2.2 million dollar surplus, and a local resident is asking Commissioners to consider a property tax cut, according to the Dalton Daily Citizen.

The Greater Hall Chamber of Commerce will host their annual Eggs and Issues breakfast on December 13, according to the Gainesville Times.

Porter said at the breakfast, which allows Gwinnett crime victim assistance agencies the opportunity to meet one another and learn about services that other agencies offer, that Motley has “tirelessly advocated” for Georgia and Gwinnett’s crime victims.