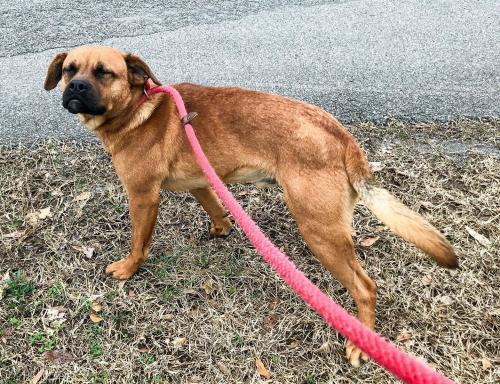 Merlin is a 43-pound, male Boxer & Mountain Cur mix who is available for adoption from Castoff Pet Rescue in Blairsville, GA.

Cute as can be is Merlin. He will steal your heart in a second. Merlin was going to be put down but we could not let that happen. He was very shy and scared when he first came in, but now he’s a delight. 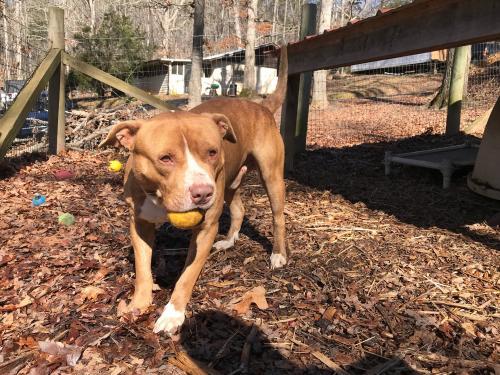 Blaze is a male Labrador Retriever & Staffordshire Bull Terrier mix who is available for adoption from Castoff Pet Rescue in Blairsville, GA. 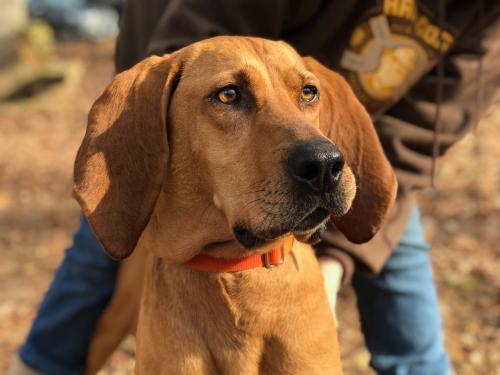 Shan is a young 64-pound female Redbone Coonhound who is available for adoption from Castoff Pet Rescue in Blairsville, GA.

Shan was found as a stray. She was possibly used as a hunting dog at one time. Shan is a big girl, with long legs and a hound’s excellent nose. She is fully vetted, weighs 64 lbs and is heartworm negative. Shan is learning how to walk on a leash. An experience hound owner would be ideal for Shan. She wants to follow her nose where ever it takes her, so we want her to be safe and secure. A tall privacy type fence would help to keep her from getting into trouble. Please come meet this stunning, beautiful, loving, fun girl.

Since its inception in 2010, the program — a partnership between the Gwinnett County Sheriff’s Office and Society of Humane Friends of Georgia that saves dogs from the county’s animal shelter by using inmates to train the dogs until they are adoptable — has successfully adopted out 416 dogs.

Started initially with five dogs pulled from the euthanasia line at the shelter, the program currently houses 31 dogs, each of which has a primary inmate handler plus one or two secondary handlers.

The dogs sleep in their primary handler’s rooms, though the secondary and tertiary handlers allow for more inmates to have access dogs while also providing continuity for the dog, should one of its handlers leave the unit.

Trainers, who are community volunteers, visit with the dogs and inmates three times a week, where they teach the inmates how to train and care for the dogs while also forming bonds with the men and the animals.

Gwinnett County Sheriff’s Office Col. Dan Pinkard, who helps oversee the jail dogs program, said while he doesn’t have specific numbers, the program has been proven to lower the rates of inmate recidivism.

“We’re very proud of our inmates in the program and have very few problems with them,” Pinkard said. “While I don’t have the physical data, if you track the inmates, you will find that recidivism is lower because the inmates leave the program with a sense of giving back to the community, a sense of accomplishment and unconditional love for the dogs — and some inmates have never had that. It does change lives and we’ve got those stories from inmates who have been through the program to (prove) it.”