On March 15, 44 BC, Julius Caesar was assassinated at a meeting of the Senate.

On March 15, 40 BC, Octavian executed 300 Senators and knights in vengeance for Caesar’s death.

On March 15, 1943, Sea Island was officially named as Governor Ellis Arnall signed legislation designating the island that had informally been given several different names.

On March 15, 1980, USS Carl Vinson, a nuclear-powered aircraft carrier, was launched at Newport News Shipbuilding in Virginia. Vinson was the first Navy ship named after a living American.

Vice President Mike Pence‘s visit to Savannah’s St. Patrick’s Day Parade this weekend will cause some additional security measures, according to the Savannah Morning News.

At a press conference on Wednesday, the city announced that the Secret Service will control a 12-block “enhanced security zone” extending from Bay Street to Oglethorpe Avenue between Whitaker and Drayton streets.

A number of items – including folding chairs, coolers, backpacks, purses, tents and alcoholic beverages – will not be allowed to enter the controlled zone.

The selling and consumption of alcohol will still be permitted within the control zone, but only in to-go cups provided by the bars and restaurants within its borders.

Pence will arrive on Air Force Two at Georgia Air National Guard at 10 a.m. Saturday, according to a White House official speaking on background.

Pence will join DeLoach on the balcony of City Hall and later walk down Bull Street to celebrate with local leaders, parade officials and the citizens of Savannah.

Governor Nathan Deal yesterday appointed Donald Whitaker as interim Sheriff of Worth County. The elected Sheriff Jeff Hobby was previously suspended from office in November 2017 after being indicted; Bobby Sapp was named interim Sheriff at that time but stepped down due to a medical condition. Last week, Sheriff Hobby was indicted for allegedly recording conversations between prisoners and their lawyers. From the AJC on the most recent indictments:

The Georgia Bureau of Investigation last month opened a new inquiry into the sheriff’s conduct, according to WALB News in Albany, after a tipster came forward with allegations that the sheriff had installed an illegal recording device in the attorney-client room at the jail.

A GBI spokeswoman on Monday said the sheriff turned himself in Friday after being charged with 66 counts of eavesdropping and illegal surveillance charges and one count of violation of oath of office.

Legislative Day 35 convenes today at 10 AM in both chambers.

Today from 11:30 to 1 PM, a screening of Intervention will be held at the Georgia State Capitol in Room 341. 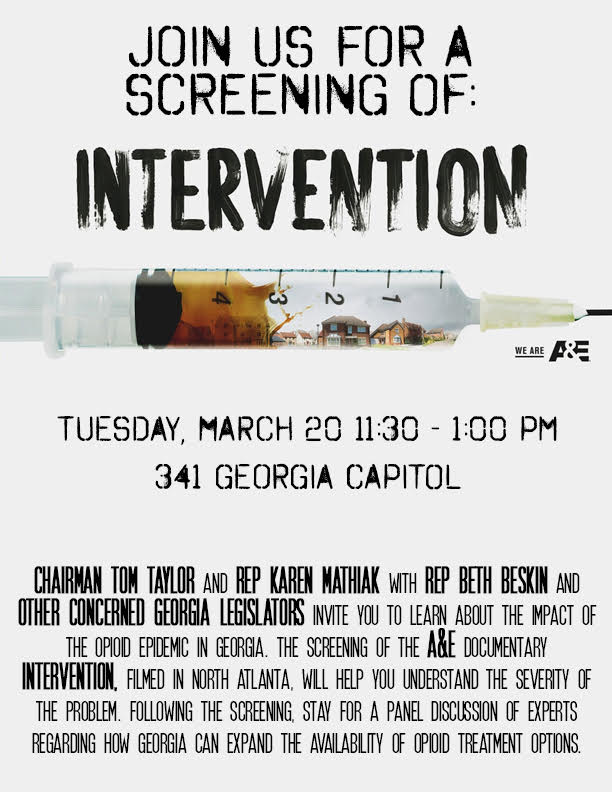 State Rep. Matt Dubnik (R-Gainesville) passed his first bill, HB 784, creating a license plate to raise funds for waterfowl and their habitat. From the Gainesville Times,

Dubnik passed his true first bill out of the legislature earlier this month, but that bill was a minor piece of legislation that he had been asked to carry by House leadership and that didn’t affect his district, he said.

“I will probably remember this one as my first one,” Dubnik said, laughing, about HB 784.

Dubnik has been involved with Ducks Unlimited for the past 15 years, including a 6-year stint as head of fundraising for the group in Georgia. Each year, the environmental conservation group raises more than $2 million in the state.

“More than 90 percent of members claim to be hunters, but we’re not a political activist group around hunting,” Dubnik said on Wednesday, March 15. “We certainly embrace our hunting heritage, but we’re in the land conservation business.”

House Bill 879 by State Rep. Jeff Jones (R-Brunswick), received a “Do Pass” recommendation from the Senate Committee on Natural Resources and the Environment. From the Brunswick News:

Senate Natural Resources and Environment Committee Chairman Tyler Harper, R-Ocilla, said it was the committee’s intention to get the bill to the floor quickly.

“We did have this in subcommittee and we did take testimony in subcommittee, so my plan is to get you to present your plan before the full committee, and we’ll move through it quite rapidly,” Harper said during a hearing this week.

“HB 879 achieves an expanded public notice when coal ash ponds are being drained into the local waters within a community, by requiring that an ad be placed in the legal organ in that community once the commencing of the coal ash dewatering — as it’s called, or pond draining — has begun,” Jones said. “And the purpose of that is just to give the locals the opportunity to know what’s going on in their communities.”

A raft of legislation aimed at controlling Fulton County tax assessments passed both chambers of the General Assembly, according to Patch.com.

New homestead exemptions in those cities and for the school system would freeze homeowners’ tax assessments at the 2016 level. It would allow increases up to 3 percent or the rate of inflation, whichever is less (the city of Sandy Springs already has this in place). The homestead exemptions would remain in place as long as homeowners own their homes. The more current assessment would take effect and become the new “frozen” level once a home is sold.

Senator Fran Millar (R-Dunwoody) proposed an amendment that would prevent local elected officials from receiving a pay raise they voted on until after their reelection, according to the AJC.

“If you’re in office when the pay raise is approved, you can’t get it till the term expires,” Millar, whose district includes part of DeKalb, told members of the House Governmental Affairs Committee on Wednesday. “Nobody should get a raise during the middle of their term.”

The amendment applies to all Georgia counties and says that commissioners who vote on their own raises cannot make them effective during their current terms. The 3 percent raise that DeKalb commissioners approved for CEO Mike Thurmond also would be delayed until 2021.

Senate Bill 403 by Sen. Bruce Thompson (R-White) passed out of the House Governmental Affairs Committee yesterday, according to the AJC.

The legislation, Senate Bill 403, would replace the state’s 16-year-old electronic voting machines with a system that creates a paper backup to ensure accuracy.

“We want to have paper ballots that deliver for voters more confidence,” said state Rep. Ed Setzler, R-Acworth. “The public recognizes that the best-in-class technology for voting is a combination of technology with paper so that you have a verifiable, recountable, physically retallyable ballot.”

The legislation is on track for a vote in the full House of Representatives after the committee approved it on a voice vote. If it passes there, it would return to the Senate for further consideration.

Flowery Branch city government is moving to a new City Hall this week.

Columbia County public schools Superintendent Dr. Sandra Carraway asked the county Board of Education to consider options to enhance school safety, according to the Augusta Chronicle.

She proposed the options to the board at its meeting Tuesday night – the day before planned observances at the county’s five public high schools commemorating the fatal Feb. 14 school shooting in Parkland, Fla.

Carraway said she met recently with about 15 Columbia County sheriff’s deputies on another matter, but while waiting for all the officers to arrive at that meeting, conversation among those gathered turned to school safety.

But when she asked deputies how many of them felt teachers should be armed, all the deputies raised their hands.

While school-system officers patrol the county’s elementary campuses, no officers are stationed permanently at those 18 schools. The district now has eight officers – one posted at each of the five high schools and three at middle schools.

Port Wentworth Mayor Gary Norton has asked for the resignations of the City Manager and attorney at the request of City Council members.

The Glynn County Republican Party will host a candidate meet and greet at Bennie’s Red Barn on St Simons Island on March 24th.

Glynn County Board of Education Post 1 (At-large) will see a contested Republican Primary and a contested general election this year.

Two Cherokee County Board of Education seats will have primary elections in May, according to the Cherokee Tribune & Ledger-News.

Lowndes County E-SPLOST sales tax collections increased more than $100k in February over the same month in 2017, according to the Valdosta Daily Times.