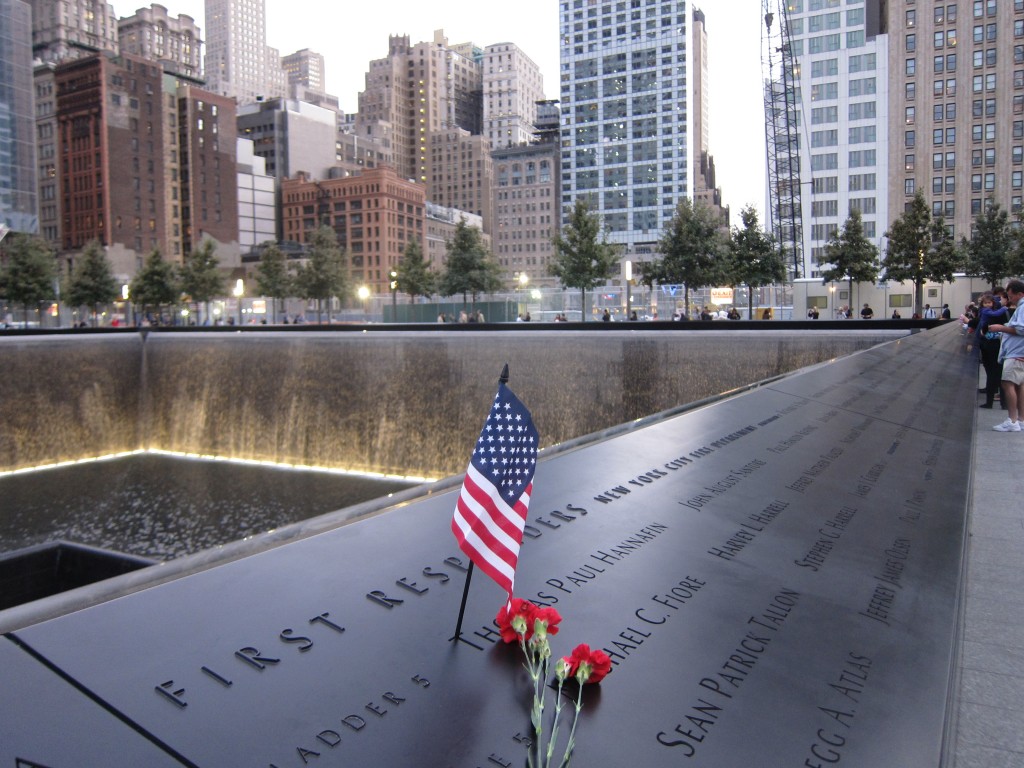 I was in my car that morning, on the way to my job when I heard on the radio of the first plane hitting. The announcers thought at first that it must be a small plane and likely an accident. Seventeen minutes later all doubt vanished as the second hit. Over the next hour, a third plane hit the Pentagon and a fourth went down in a field in Pennsylvania. We watched on television as the towers burned, then collapsed.

Shortly afterwards, the Family Room opened in a nearby tower to provide a place for loved ones to grieve out of the public eye.

The Family Room opened in April 2002 in space donated by Brookfield Office Properties, the owners of 1 Liberty Plaza, across Church Street from the trade center site. By presenting what was known as a medical examiner’s family identification card, victims’ relatives were admitted during regular workdays and at night, on weekends and on holidays.

On the 20th floor, behind a door marked “The Family Room,” relatives could settle into ample leather couches or stand at windows 15 and 20 feet wide. The room was intended for “quiet contemplation,” said a 2002 notice from the Lower Manhattan Development Corporation, which created and maintained the space, just a few doors down from its own headquarters and those of the National September 11 Memorial & Museum at the World Trade Center Foundation.

When the Family Room at 1 Liberty Plaza was replaced this summer by a new private gathering space in the National September 11 Memorial Museum pavilion, the [New York] State Museum and the memorial museum painstakingly documented the older room, and the State Museum acquired what contents family members themselves did not choose to reclaim.

There are materials in the Family Room collection related to about 1,000 victims, Mr. Schaming said, or roughly one-third of all casualties that day. “It is the most singular collection of the faces of people who were killed on 9/11,” he said.

A monument on Long Island to victims of 9-11 will include the names of 582 people who later died of conditions related to the aftermath of the attacks.

A separate plaque will have the names of 582 police officers, firefighters, construction workers, cleanup volunteers and others who spent time in the rubble of the World Trade Center in the days or months after the attacks and, years later, died of a variety of causes that they, their families or their doctors suspected were linked to toxic ash and smoke at the site. There will be room to add more names.

“I think what the town of Hempstead is doing is nothing short of honorable,” said John Feal, a longtime advocate for 9/11 responders with health problems. “People who lost a loved one to illness suffer just like someone lost on that day. Hopefully this will offer some ease and comfort to them.”

In May, officials at the National September 11 Memorial & Museum announced plans to set aside a commemorative space at the World Trade Center to honor rescue and recovery workers.

Governor Nathan Deal has declared an emergency for all of Georgia and the Georgia State Capitol is closed today and tomorrow.

Georgia EMCs report more than 146,000 customers without power as of 10 AM today.

Approximately 146,000 customers are without power at the present time, up from 31,000 earlier today.

The numbers have increased as the weather continues to pound the state and produce tropical storm-force winds that are blowing trees and other debris on power lines. Winds, ranging from 40 to 60 mph, are wreaking havoc on the electric infrastructure and causing severe damage especially in south, southeast and southwest Georgia.

Anticipating significant property damage and outages as a result of the storm, EMCs have been in discussions with states east of a line from Texas to Wisconsin to make plans for crew movements. Likewise cooperatives are working with EMCs within Georgia and may be able to move crews from EMCs that are least impacted to ones that are most impacted.

Georgia Power has 3400 workers positioned to respond to electrial outages due to hurricane Irma.

Georgia Power officials said Sunday night that they have 3,400 personnel positioned to respond to what are expected to be extensive power outages caused by Hurricane Irma, which will affect Georgia starting late [Sunday night].

Georgia Power officials said all of its resources have been held to respond to storm restoration in Irma’s wake.

“Once the storm leaves affected areas, the company must wait until conditions are safe for damage assessment teams to enter the field and begin the restoration process, followed by repair crews, which could take several days, if not weeks, depending on the amount of damage and safe access to the area,” Georgia Power officials said. “As weather conditions improve, restoration efforts will accelerate, but it could take an extended period of time for all customers to be restored.”

Georgia Power has asked for help from other utilities through a mutual assistance network, but officials said those resources have been assigned to harder-hit areas in Florida before Georgia.

In advance of Hurricane Irma 45 babies from Savannah Memorial Hospital’s Neonatal Intensive Care Unit evacuated to several Georgia hospitals. Fifteen of the babies were transported via ambulance and helicopter to Navicent Health in Macon.

Dr. Mitch Rodriguez is the Medical Director of the NICU. He said, “Some of our patients that came were relatively stable, just completing their hospitalization. Some of them were relatively critical in the sense that they were either post-surgical and/or still on the ventilator or on a significant amount of support.”

Rene Gunner is in the Macon NICU with her daughter, Quinn, who was born at 26 weeks. Gunner said, “You don’t even want to be in this situation, but things have just kind of lined up for us, and so we’re incredibly grateful and thankful for all the blessings because I consider this a blessing, coming to Macon.”

Augusta University Medical Center is continuing to take in patients from the coastal areas, including 12 Neonatal patients from Savannah.

There were a couple steps nurses had to take before sending the babies off from Savannah.

“We had to make sure they were medically cleared to go, copied all of their charts, made sure their parents were aware, got consent from them to come up and made sure all the parents had accommodations once they got here,” said [Lauren] Brooks.

A few nurses from Savannah also made the trip to Augusta.

Other infant patients were evacuated to Atlanta hospitals.

Facilities like Northside Hospital and Children’s Healthcare of Atlanta have begun to take in infant patients from south Georgia.  Northside Hospital’s Atlanta and Forsyth campuses, for example, say they’ve opened their doors to 11 infants.

According to a spokesperson with the hospital, 11 babies from the Neo-natal Intensive Care Unit at Memorial Health Hospital in Savannah arrived with their parents on Friday.

In all, the Georgia Department of Public Health facilitated moving a total of 59 infants on life support–from hospitals in the Savannah area to other hospitals in metro Atlanta and the rest of Georgia that are not expected to be impacted by hurricane-force winds.

Patrick O’Neal, M.D. is the Commissioner of Georgia DPH, and explained that the young infants, many of them premature, each had to travel inside a mobile ICU called an isolette to survive the hours-long evacuation.

“It will allow almost like a cocooning of the baby, so that it can be moved, very safely, maintaining all those requirements that the baby would have had in the original hospital,” Dr. O’Neal said.

Georgia DPH has activated its emergency operation center–part of GEMA’s state operations center–helping coordinate hospital evacuations across the state and making sure shelters for thousands of evacuees are staffed with doctors and nurses, and equipped with cots and necessary supplies.

Additionally, voters are encouraged to take the following steps to ensure they are prepared for the upcoming elections as several county election offices are temporarily closing in preparation for Hurricane Irma.

“I want voters to be prepared for Election Day ahead of this storm,” said Secretary of State Brian Kemp. “My office is encouraging voters in affected counties to use these steps if they have any questions about their voter registration status.”

Vail is one if six candidates who’ve qualified to serve out Horton’s term, which expires Dec. 31, 2019. The other candidates running in the Nov. 7 special election are Hanny Alexander, Bassem Fakhoury, Sean A. Groer, Mike Nyden and Joe Piontek.

Former Governor Roy Barnes is among the lawyers filing a class action lawsuit against Equifax.

A team of lawyers, including former Georgia Gov. Roy Barnes, has filed a class-action lawsuit against Equifax over the massive data breach that has compromised the personal information of more than 140 million U.S. consumers.

The lawsuit filed in U.S. District Court in Atlanta faults Equifax for “gargantuan failures to secure and safeguard consumers’ personally identifiable information … and for failing to provide timely, accurate and adequate notice” to consumers that such sensitive material had been stolen.

The Atlanta case calls Equifax reckless in its handling of consumers’ data, and also said the company failed to disclose why there was more than a month’s delay in making the breach public. It cites the sale of stock by three executives days after Equifax learned of the breach, but weeks before the company alerted consumers to the cyber theft.