Bridget Bishop was the first person hanged after being convicted of practicing witchcraft in the Salem witch trials on June 10, 1692.

Click here for the full text of Georgia’s Royal Charter from 1732.

Click here to see the oldest copy of Georgia’s Royal Charter, which was presented to Georgia by South Carolina.

The Battle of Bloody Marsh was fought between Spanish forces and colonists under James Oglethorpe on St Simons Island, Georgia in 1742 on a date that is variously cited as June 9 or June 7, 1742. Thus began the rivalry between Georgia and Florida.

On June 9, 1772, the first naval attack of the Revolutionary War took place near Providence, Rhode Island, as HMS Gaspee, a British tax enforcement ship was baited into running aground and attacked by a boarding party the next day.

On June 10, 1793, Washington, DC officially replaced Philadelphia as the Capital of the United States. To honor Washington, today we will adopt a smugly superior attitude, name-drop constantly, and speak condescendingly to those who currently live in the states we used to live in.

Rebecca Latimer Felton was born on June 10, 1835 in Decatur, Georgia and later became the first woman to serve in the United States Senate after being appointed by Governor Thomas Hardwick to fill a vacancy in 1922.

The Girl Scouts of America were incorporated in Washington, DC on June 10, 1915.

The Republican National Convention in Cleveland became the first political convention broadcast on the radio on June 10, 1924.

Alcoholics Anonymous was founded on June 10, 1935.

I AM delighted today to approve the Equal Pay Act of 1963, which prohibits arbitrary discrimination against women in the payment of wages. This act represents many years of effort by labor, management, and several private organizations unassociated with labor or management, to call attention to the unconscionable practice of paying female employees less wages than male employees for the same job. This measure adds to our laws another structure basic to democracy. It will add protection at the working place to the women, the same rights at the working place in a sense that they have enjoyed at the polling place.

While much remains to be done to achieve full equality of economic opportunity–for the average woman worker earns only 60 percent of the average wage for men–this legislation is a significant step forward.

Cream was formed on June 9, 1966 by Eric Clapton, Ginger Baker, and Jack Bruce.

On June 9, 1973, Secretariat won the Belmont Stakes and the Triple Crown, the first to win all three of the Triple Crown races since 1948. Secretariat was bred by Christopher Chenery, a graduate of Washington & Lee University in Lexington, Virginia, whose jockeys wore blue-and-white silks in honor of Chenery’s alma mater.

Those of you who attended the 2003 Inaugural of Governor Sonny Perdue will remember that Ray Charles played that night.

In Georgia today, flags will fly at half-staff on state government buildings and property, in honor of SPC Etienne J. Murphy of Snellville, who died of wounds received in Syria. From the Gwinnett Daily Post:

Deal called it a mark of respect for the memory of Etienne Murphy, a 22-year-old soldier on his first deployment, who died last month in a vehicle rollover crash.

On Friday, June 9, Vice President Mike Pence will travel to Marietta, Georgia to meet with airmen, service members and their families at Dobbins Air Reserve Base. The Vice President will give formal remarks at the conclusion of his visit.

In the afternoon, the Vice President will attend an event for Karen Handel for Congress.

Air Force Two will land at the Dobbins Air Reserve Base at 11 a.m., the White House said. He will be accompanied by several Republican Georgia congressmen on the flight. From there, Pence plans to give a short speech after visiting with service members and their families.

Side note: He’s also expected to call into Herman Cain’s show on WSB radio around 10 a.m. Friday to talk about healthcare policy and infrastructure.

From the Marietta Daily Journal:

Rep. Barry Loudermilk, R-Cassville, and Rep. Doug Collins, R-Gainesville, will accompany Pence on Air Force Two during the visit, which is set to begin at 11 a.m.

“Dobbins Air Reserve Base is the world’s foremost multi-service reserve training base,” Loudermilk said. “Dobbins provides crucial training and support for Army, Marine, Navy, and Air Force reservists and has a significant economic impact on Georgia’s 11th District. I am honored to join Vice President Mike Pence in recognizing our local military personnel and their families at the base.”

Pence will attend a private event to support Republican Karen Handel’s congressional run in the afternoon. Handel faces Democrat Jon Ossoff in a June 20 runoff to determine who will represent citizens in the 6th Congressional District. 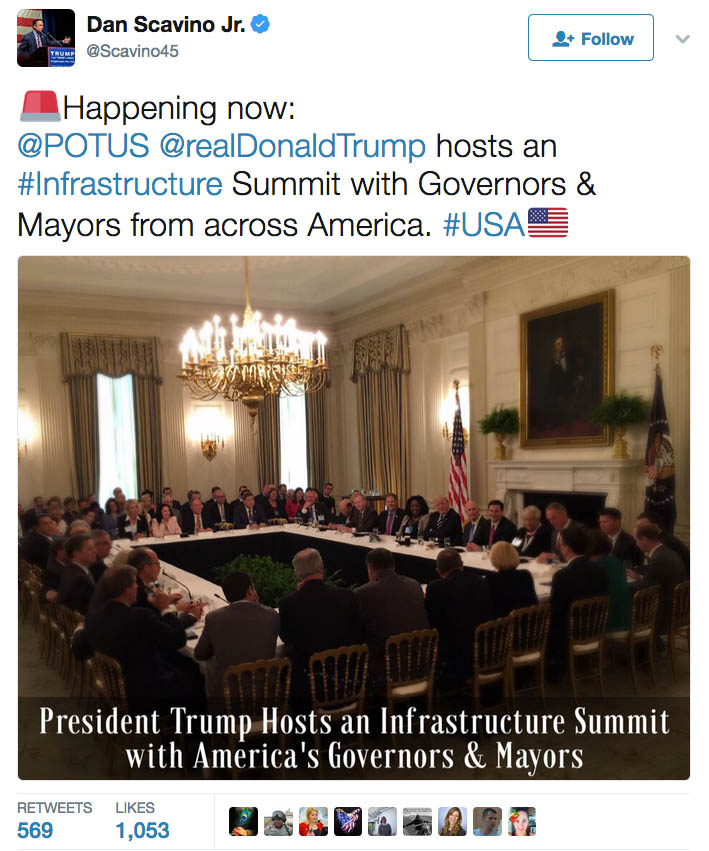 That’s her at the far end of the table in a pink jacket.

More on the Trump infrastructure summit:

President Trump is working to build support for the $1 trillion plan he’s launching this week.

The president has already claimed that the work will be completed ahead of schedule and under budget.

Vice President Mike Pence was also in attendance. He tweeted about the meeting Thursday afternoon, saying it was a productive lunch.

The US Department of Defense wants to convene another Base Realignment and Closure Commission (BRAC).

“From a taxpayer standpoint, I salute the Pentagon wanting to seek BRAC approval again,” said Keith Post, the Navy League’s Georgia state president. “The fact, according to them, that we have 20 percent more shore-based infrastructure than we need as a nation spread out across the country, says all you need to know about the waste of money to maintain those facilities. This has occurred while other things such as funding for shipbuilding and ship and base maintenance have taken a back seat or have been non-existent.”

Sheila McNeill, former national Navy League president and director of the Camden Partnership, said she isn’t concerned about Naval Submarine Base Kings Bay being targeted for closure. Instead, she believes Kings Bay could grow under the right circumstances.

“I think there are opportunities for Camden County in a BRAC,” she said. “As a taxpayer, you have to be happy they’re doing this.”

Deal will introduce legislation codifying the Authority during the 2018 legislative session.

“For some time now, state and local officials have been exploring solutions to modernize our 9-1-1 system and improve our communications network,” said Deal. “This past session, legislation creating a semi-autonomous body to oversee 9-1-1 operations, fee collections and disbursements came to my desk. While SB 222 attempted to address several current challenges, many of which I’ve incorporated into this executive order, it presented me with other concerns.

“As I explained in my veto statement, the lack of state oversight and coordination could hamper joint emergency response efforts, and the authority would also go unfunded for two years. However, I also recognized the need for better statewide service and announced my intention to create a Local Government 9-1-1 Authority that would be housed at and funded through GEMA/HS. I’m grateful for the input and recommendations provided by local emergency response workers and officials, legislators and other stakeholders and look forward to working with the Authority moving forward.”

The Local Government 9-1-1 Authority Advisory Board is comprised of state agency heads, local elected officials and representatives from the public safety and law enforcement communities, as recommended by SB 222. Its members include:

The role of director was also a recommendation of SB 222, and GEMA/HS Director Homer Bryson appointed Michael Nix to fill this role.

Counterfeit pills associated with a wave of overdoses and deaths may contain a new drug, according to the GBI.

GBI officials said they received evidence Wednesday from the agency’s crime lab related to the cluster of reported overdoses that have been concentrated in the central Georgia area. Preliminary results indicate a mixture of two synthetic opioids, with one of the drugs being consistent with a new fentanyl analogue.

This fentanyl analogue has not previously been identified by the crime lab. Due to the nature of the analysis, testing to confirm the full identity of the drug will require additional time, GBI officials said.

The most recent case count includes a total of 26 cases and four possible deaths. A spokeswoman for the GBI said autopsies were expected to be conducted on the decendants.

Republican Karen Handel and Democrat Jon Ossoff are in a dead heat, according to a new poll.

The poll, conducted by Landmark Communications, has Ossoff leading Handel 49.6-47.1. Only about 3 percent of voters are undecided. The margin of error is about 5 percent.

It’s the first poll released since Tuesday’s televised showdown between Handel and Ossoff, and it shows Ossoff’s numbers have inched up by about a half-point since WSB’s last poll was released last week.

The findings solidify many of the trends that have emerged in public polling of the nationally-watched June 20 runoff. Ossoff has a double-digit lead over Handel among women, leading 54-44. The Republican is beating Ossoff among male voters by a 51-44 margin – a closer gap than some previous surveys. He leads Handel among younger voters, she trounces him among those over 65.

He’s capturing about 15 percent of Republican voters and a narrow majority of independents – a crucial voting bloc that typically leans right. It shows almost no cross-over on the flip side; only 1 percent of Democrats say they’re backing Handel.

A Gwinnett County committee has recommended 104 projects for funding under the Special Purpose Local Option Sales Tax (SPLOST) approved in 2016.

The county announced the Citizens Project Selection Committee funding recommendations this week, including the Tier I funded projects. The county’s list of 104 projects does not include $30.8 million that has been set aside for joint Tier I projects between the county and its cities, or another $48.6 million in funding for lower priority Tier II projects.

About 65 percent of the $950 million SPLOST that voters approved last fall is set to be spent on transportation projects.

State Rep. Bert Reeves (R-Marietta) says he will try for a second year to pass comprehensive adoption reform in the next session of the Georgia General Assembly.

Speaking before a crowded room at a Kiwanis Club of Marietta meeting Thursday afternoon, the third-year representative said he would work to get a nonpartisan version of the bill through both legislative chambers and signed into law.

“It’s an important initiative that I’ve been working on for over two years now,” he said. “It’s been 30 years since our adoption law has been updated or revised.”

The internet, he said, has changed the way adoption is done and each year Georgia law falls further behind other states when it comes to the important issue.

Savannah is considering a moratorium on short-term rentals.

Alderman Bill Durrence said there were concerns that the stay, added to the agenda on Wednesday afternoon, was being rushed without enough notice.

Durrence had requested the stay as the city develops new vacation-rental regulations to address concerns about the industry’s impact.

During Thursday’s meeting, Jeanne Glover said that she and her neighbors have to contend with noise issues and drunken behavior near her home on Jones Street from vacation renters who are mostly visiting for celebratory occasions.

Staff is considering limiting the number of vacation rentals that can operate in the city, as well as placing caps on how many can be located on a block or street because of concerns among the council and residents that neighborhoods are being overrun with visitors. Property owners would also have to live on-site for new vacation rentals in more residential areas, and there could be a maximum number of days a property can be rented, under other proposed changes.