Georgia Politics, Campaigns, and Elections for May 2, 2017

Georgia Politics, Campaigns, and Elections for May 2, 2017

On May 2, 1886, Jefferson Davis left Atlanta, headed to Savannah.

On May 2, 1939, Lou Gehrig benched himself as the Yankees took the field against the Detroit Tigers, ending his streak of 2,130 consecutive games.

Georgia Department of Transportation Commissioner Russell McMurry announced that the seciton of I-85 that collapsed in a fire will be reopened by Memorial Day.

“It will open the minute it’s ready to open, no matter what time of day,” McMurry said following a press conference atop a stretch of the closed highway in Buckhead.

The new timeline — nearly three weeks ahead of the original June 15 projected opening — would be a tremendous relief for hundreds of thousands of commuters. Driving in parts of Atlanta has been unusually awful since March 30, when a fire destroyed a portion of I-85 near Piedmont Road in Buckhead and shuttered one of the main highways into the heart of the city.

House Bill 44, the FY 2018 budget was among them, though he sent a letter announcing his intention to disregard one section.

“The FY 2018 budget maintains Georgia’s position as a national leader in conservative fiscal management and further strengthens our top priorities: quality education for all children, public safety in our communities, an economy that continues to generate jobs and an infrastructure system that supports a growing population,” said Deal. “With this budget, we are working to make Georgia a better place to live, work and play by investing in public safety personnel, teachers and others responsible for ensuring the safety of Georgia’s children. Georgia has enjoyed sustained economic growth and this budget lays the foundation for continued short-term and long-term success. I commend the General Assembly for working with me once again to balance the budget while addressing the issues that matter most to Georgia’s citizens.”

HB 44 invests more than $516 million in new funding for K-12 education, including allocations of more than $156.8 million for enrollment growth, training and experience, and $85.8 million for the Quality Basic Education Equalization program to assist low-wealth school systems. Also included is $160.1 million in funding to provide a 2 percent increase to the state base salary schedule for certified personnel, school bus drivers and school nurses. The budget also provides additional funding for the Teachers Retirement System to ensure teachers’ pensions maintain strong financial footing.

The FY 2018 budget also invests more than $96 million in the Department of Human Services child welfare services programs to ensure that those who care for our most vulnerable citizens have the resources necessary to provide safe, caring environments for children in need. Of this funding, $25.9 million will provide 19 percent pay increases for child protective services employees to assist the department in recruiting and retaining staff, and $31 million will provide per diem rate increases for foster parents and relatives caring for children.

The budget includes $55.2 million in addition to funding allocated in the Amended FY 2017 budget to provide a 20 percent salary increase for law enforcement personnel, as well as salary increases for criminal investigators and public safety trainers. This increase has already had a significant impact in recruiting new officers for the Department of Public Safety, as the Department has received twice as many trooper applications as usual since the increase was announced in September.

As a result of continued revenue growth from HB 170, the Georgia Department of Transportation will receive an additional infusion of $162.6 million to help maintain the state’s roads and bridges. This is in addition to the $100 million already included in this year’s capital funding package to supplement bridge repairs and improvements. To date, HB 170 has generated more than $1 billion in new funding each year to expand and maintain Georgia’s road and bridge network.

School teachers may not all get that promised 2 percent raise.

Some metro Atlanta district officials say the state funding tied to the promised 2 percent raise was based on a state teacher’s salary schedule that is significantly lower than theirs. So the money from the state doesn’t add up to 2 percent locally.

Most districts have yet to complete their budgets for the coming school year. But in metro Atlanta, at least three districts do not intend to give teachers 2 percent raises — Cobb, Atlanta and DeKalb.

“I am disappointed that systems are not choosing to follow the intentions of the General Assembly that teachers get a 2 percent pay raise,” England said.

Gov. Deal will give the keynote address at Valdosta State University’s graduation ceremony on Saturday.

“Graduation is a defining moment in every student’s life,” said Dr. Richard A. Carvajal, VSU president. “We are excited that the governor of this great state will help us pay tribute to the outstanding efforts of our spring graduates and celebrate education as the foundation upon which success is built. These students have had to overcome any number of challenges to reach this point in their life’s journey.”

“It is that very perseverance that protects and nurtures Blazer Nation’s 100-plus-year-old tradition of academic, creative, athletic, research and service excellence. This weekend we celebrate not an ending but the beginning of many great things to come.”

More than 1,200 undergraduate and graduate students will be recognized during Valdosta State University’s 223rd commencement ceremonies Friday, May 5, and Saturday, May 6.

Lieutenant Governor Casey Cagle began the morning in Augusta this morning on a statewide campaign tour and is speaking at the National Infantry Museum in Columbus, GA later today. 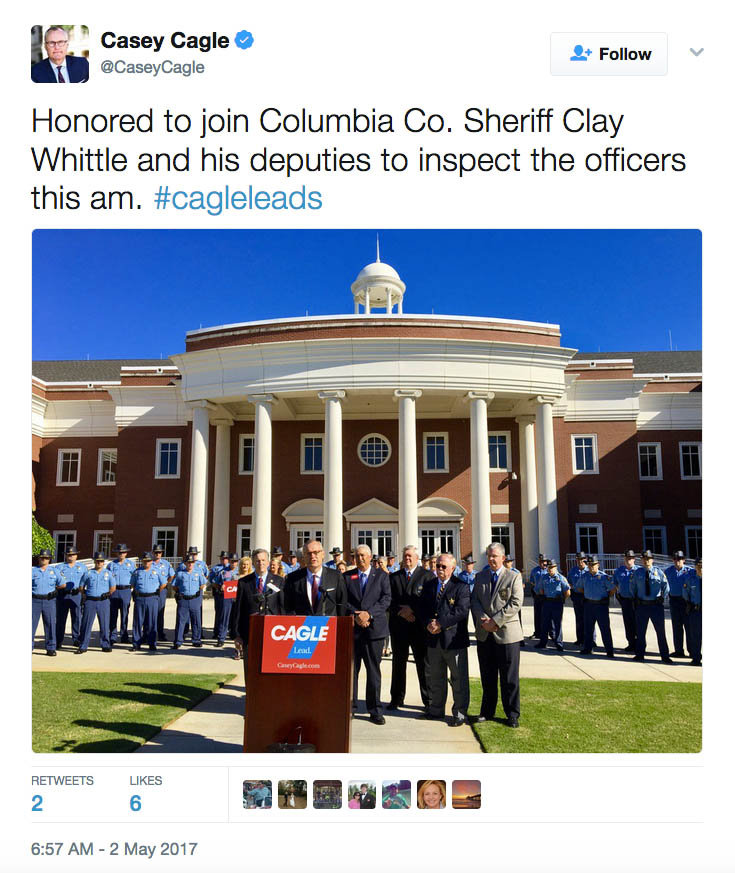 The Gainesville Times writes that Georgia Secretary of State Brian Kemp is striking a populist tone in his campaign for Governor.

Georgia Secretary of State Brian Kemp is striking a populist tone in his 2018 run for governor, touting his record as a small business owner, prioritizing rural Georgia and adopting a “Georgians first” attitude to state spending and illegal immigrants.

The seven-year secretary of state sat down with The Times on Monday to discuss these issues and others involved in his campaign to be Georgia’s third Republican governor.

“I’ve been a small business owner for 30 years,” he said. “I’ve been working with working Georgians every day, and that includes today. I think that’s one of the values that I’ve had — I’ve never lost touch with what’s going on in the real world.”

“I think people are very frustrated with it seeming like the government is always doing something for the special interests or those that are here illegally and not really helping our own citizens,” Kemp said. “When you think to our rural areas, we’ve got kids who can’t get on the internet to do their homework at night.”

Kemp’s platform includes a cap to state spending, refunds for taxpayers and the reduction of Georgia’s bureaucratic corps.

Councilman Tim Thomas began the discussion by stating there had been a lot of talk in the community about what the council was considering and he wanted to clear it up.

He said the council is not looking at reducing the power or the salary of Mayor Randy Toms, but he said the city has grown too large not to have a city administrator. He explained that unlike a city manager form of government, which does take power away from the mayor, a city administrator form of government would provide a full-time person to assist the mayor in running the city.

“We are not reducing anybody’s powers,” he said.

Augusta Commission is considering doing away with the city personnel manual.

Augusta Planning Commission is working on a zoning ordinance to allow smaller alcohol brewers and distillers outside of industrial areas.

In the meantime, board members will tour two local microbreweries, seek public feedback and study various aspects of the proposed ordinance, such as how much alcohol a brewer or distiller can manufacture under the new special exception, Planning Director Melanie Wilson said.

The Augusta code already allowed brewpubs, where homemade beer is sold in restaurants with food, and allows breweries in industrial zones.

“Everybody has been talking about microbreweries,” Wilson said. “The discussion should have been nano-breweries and pico-breweries.”

Savannah is moving forward with a “sales fee” to fund increased services in the historic district.

The 25-cent fee would be applied to sales of $10 or more to cover the costs of the Savannah Serves program that consists of uniformed ambassadors, maintenance workers and Savannah-Chatham police officers. Groceries, gas and prescription medications would be exempt from the fee, and businesses would retain 3 percent of the revenue to cover administrative costs.

The city estimates the fee will generate $2.5 million, although the amount is considered conservative since the program is new and there is no history to work from. As a result, the city will only implement the program in stages so that the costs do not exceed the revenue, said Marty Johnston, deputy assistant to the city manager. After the program has been in effect for a couple of months, the city will review the proceeds and address any concerns, Johnston said.