German scientist Johannes Kepler dated the creation of the universe to April 27, 4977 BC(E).

On April 27, 1773, the British Parliament enacted the Tea Act, granting a monopoly on selling tea to the American colonies.

Ron “Big D” Daniels, the official Legal Counsel and Poet Laureate for GaPundit.com is running for Secretary of the Georgia Bar Young Lawyers Division. Click here to vote for him today if you’re a YLD member.

House Bill 196, signed this week by Governor Deal, was titled as a bill dealing with tax exemptions for the music industry, and that’s how it started its legislative life.

The version that passed and was signed into law was gutted and became a “Christmas tree” bill carrying a number of other non-controversial tax measures, including “to revise the criteria used by tax assessors to determine the fair market value of real property; to allow certain business corporations to participate in the indirect ownership of a home for the mentally disabled for financing purposes;…. to provide that certain disabled veterans shall be issued refunds of certain ad valorem taxes paid during certain periods of time when such disabled veterans receive final determinations of disability containing retroactiveperiods of eligibility.”

Consider this both a clarification without an admission of fault, and a cautionary tale about the nature of the legislative process.

The bill is an alternative to Deal’s preferred strategy for low-performing schools: A constitutional amendment seeking to let the state take over some schools. Voters rejected that in November.

Lawmakers instead proposed a “chief turnaround officer” to work with struggling schools. Schools selected by the new official will sign contracts with the state, creating a plan to improve student performance. Deal’s signature will begin work to implement the plan, including a national search for the new position.

Deal’s office says he plans to sign nine other education bills on Thursday.

The AJC’s Get Schooled blog has information on some of the other bills the Governor will sign today.

The Special Election for the Sixth Congressional District will likely end up the most-expensive house race ever.

Right now the record is held by the 2012 election in the 18th congressional district of Florida, pitting wild-man incumbent Republican Allen West against Democrat Patrick Murphy. West, being a wild man, had a national fundraising base, and he and his allies spent close to $20 million. Murphy and his allies spent enough to push the total to a reported $29,279,964. Murphy narrowly won.

Runoff candidates Karen Handel and Jon Ossoff aren’t there yet, but are off to a blazing start in fundraising and spending after a combined $14 million was deployed for the first round.

Ossoff and the Democratic Congressional Campaign Committee reserved three-quarters of a million dollars in ads almost instantly after the April 18 returns. With the Democratic candidate coming so close to a knockout, there is no reason to think his amazing fundraising will slack off significantly. And whether or not he remains highly competitive in the ad wars, his investment in field operations (costing $2 million before the first round) is impressive….

On the GOP side, it’s not Handel (who will supposedly benefit from a fundraiser headlined by Donald Trump himself) who’s burning money, but the outside GOP groups that may have actually outspent Ossoff in the first round. Paul Ryan’s leadership PAC spent a reported $3 million in the first round, and has already committed $2.5 million for ads and another cool million for field operations. You can expect the National Republican Congressional Committee (the DCCC’s counterpart), which spent $2 million the first time around, to stay engaged, along with the Ricketts family’s Ending Spending PAC, which was unique in backing Handel from the get-go. The U.S. Chamber of Commerce is also expected to spend some dough backing Handel.

The West-Murphy spending record might have been safe if the runoff campaign in sixth congressional district wasn’t a nine-week marathon. As it is, the money will keep rolling in like the ocean tides.

A fundraiser featuring President Donald Trump in support of Republican Karen Handel will certainly add to the spending total.

[T]he June 20 must-win runoff for Republicans has fast become a circle-the-wagons moment. Bitter rivals from Handel’s past races — including a 2010 bid for governor and a 2014 run for the U.S. Senate — have quickly endorsed her. And a raft of Washington-based super PACs have pledged their support.

That could help neutralize one of her most glaring weaknesses. She’s long struggled to keep pace with rivals in the race for campaign cash, and her last fundraising haul was about 20 times smaller than Ossoff’s unprecedented $8.3 million take.

New donors have buoyed her campaign with more than $1 million since last week’s vote, and Trump’s Atlanta fundraiser will add another tide of cash. Tickets start at $2,700 a person or $5,400 a couple. A hosting sponsorship will cost $25,000.

She’ll have reinforcements from outside groups ready to pour money and resources into what could wind up being the most expensive House race ever. The U.S. Chamber of Commerce endorsed Handel on Tuesday, and the Congressional Leadership Fund — a super PAC with ties to U.S. House Speaker Paul Ryan — said Wednesday that it will pump an additional $3.5 million into the contest.

The Congressional Leadership Fund’s $3.5 million spend will include $2.5 million in TV ads beginning May 10 along with a door-to-door canvassing program, direct mail, and digital ads.

Democrats, meanwhile, are using the Trump-Handel fundraiser as fodder for more fundraising of their own.

“Trump’s SO scared of losing that he’s leaving work early to crush our historic momentum,” said an email solicitation sent out by the Democratic Congressional Campaign Committee.

The organization said it had created an “Emergency Response Fund to match the piles of cash Trump will rake in” for Republican Karen Handel.

The Georgia Department of Human Services Division of Aging held a listening session in Hall County for input into a comprehensive plan on addressing senior hunger.

Uptown Macon will loan $800k to a private business in downtown Macon.

[NewTown President/CEO Josh] Rogers wrote in a statement posted on his group’s website that “13WMAZ inaccurately said that the County approved use of its money to provide the loan to the Downtown business, and we want to be very clear that at no time was taxpayer money allocated to this project nor to this Fund.” The station has since posted a correction on its website.

A commission committee approved an $800,000 loan to NewTown Macon for City Ventures LLC, which is the company that owns Crazy Bull, a nightclub at 473 Second St.

NewTown created its Real Estate Development Loan Fund in 2012, which consists of bond funds issued by the Macon-Bibb County Urban Development Authority and backed by the “full faith and credit of the Macon-Bibb government,” Rogers said. The fund provides loans to help develop the downtown area and businesses downtown. If a loan is more than 40 percent of the total project cost, NewTown must notify the commission, which is what happened Tuesday.

“Even if all we ended up with is the real estate, it will be more than sufficient to cover the outstanding debt,” Rogers said.

Roswell City Admininstrator Kay Love submitted her resignation and will start a new job with the Georgia Municipal Association.

Cagle will also speak at the Georgia Southern graduation ceremony on Saturday, May 6th.

The Lieutenant Governor is holding a free event in Gwinnett County on Sunday. 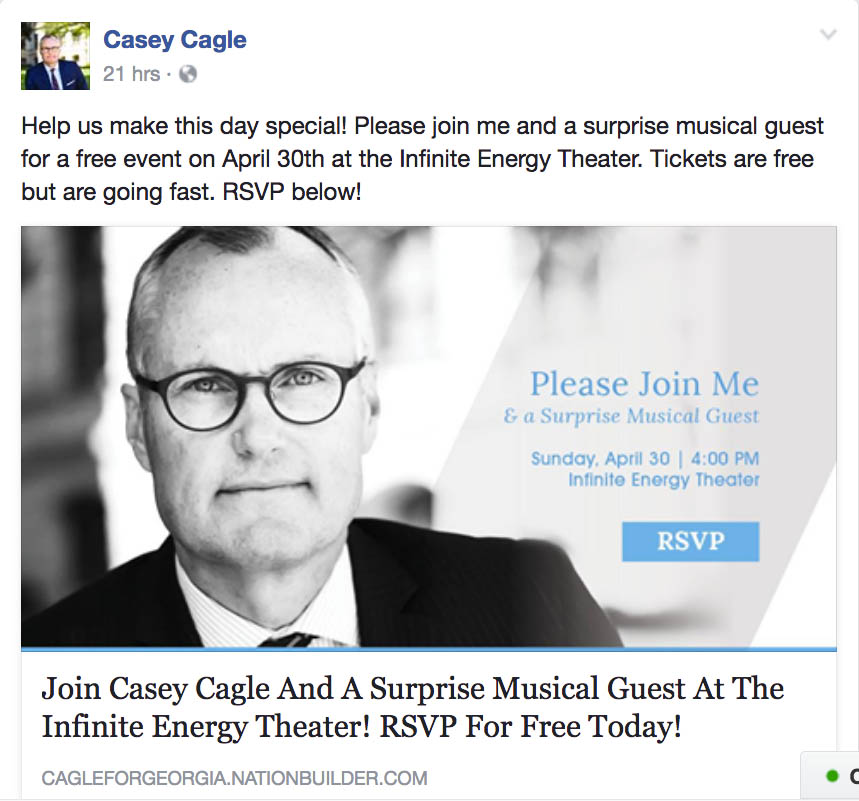