On February 14, 1779, Lt. Col. Elijah Clarke led a charge against British forces at the Battle of Kettle Creek.

On February 14, 1956, the Georgia General Assembly passed legislation calling for the protection, cleaning and maintenance, and display of historic Confederate flags at the State Capitol.

On February 14, 1958, the Georgia General Assembly passed a resolution purporting to censure President Dwight D. Eisenhower for using National Guard troops in the integration of schools in Little Rock, Arkansas.

Later that year, the group began making regular runs in the Wilson family station wagon up to New York City for gigs at seminal New Wave clubs like Max’s Kansas City and CBGB’s. With Kate and Cindy in their mile-high beehive wigs and 60s thrift-shop best, and Fred looking like a gay, demented golf pro, the B-52s made an immediate impression on the New York scene, and their independently produced single, “Rock Lobster,” became an underground smash.

The B-52s are still in business three decades later, minus Ricky Wilson, who died of AIDS in 1985. Significantly, their success is widely credited for establishing the viability of the Athens, Georgia, music scene, which would produce many minor successes and one massive one—R.E.M.—in the years immediately following the breakthrough of the B-52′s.

On February 14, 2012, we published the first edition of the GaPundit daily political news, featuring dogs. We originally thought that the dogs would be temporary until enough people complained about them that we felt the need to go to once a week. We were surprised that the adoptable dogs have become the signature of GaPundit’s otherwise-political offerings and our greatest success.

House Bill 81 by State Rep. Tom McCall (R-Elberton) would allow hospitals to apply a state tax refund to a debt owed them.

House [B]ill 81 would allow Georgia hospitals that are owned by public hospital authorities to get outstanding medical debts paid by deducting the money owed from a pending state tax refund. The bill would include authority-owned facilities that are operated by non-profit organizations, which is the case with many hospitals in Georgia.

Rep. Tom McCall, R-Elberton, said it would allow struggling hospitals an avenue to collect money they have not been able to get through billing or collection proceedings. He said he was thinking especially of the state’s small hospitals, many of which are struggling to stay afloat.

McCall said his local hospital suggested the idea and he thought it made sense.

“You know these rural hospitals have got one foot in the grave and the other one fixing to fall in it,” McCall said.

Greg Bluestein of the AJC writes that Governor Deal signed Senate Bill 70 yesterday, although a press release last week said the Governor will sign it today.

Lee Shearer of the Athens Banner-Herald writes about House Bill 338, an education measure.

Legislation introduced in the state House last week would create a new structure headed by a “Chief Turnaround Officer” who would appoint “turnaround coaches” for low-scoring schools.

House Bill 338, would also lay the groundwork for a state-run school accreditation system and create penalties for school systems with low-performing schools, including removal of school board members and school takeovers by the state Board of Education through the new Chief Turnaround Officer.

Under terms of the bill, the state can terminate the contract or charter of low-performing schools or systems that decline when the Chief Turnaround Officer “extends an opportunity” to amend the charter contract with the state to allow the state to come in. If the local school board declines, the state school board, whose members are appointed by the governor, would also be able to impose other sanctions on locally elected school boards if they won’t enter into a “an intervention contract for the purposes of agreeing to receive assistance.”

“In our justice system, the rights of crime victims should be just as strong in the eyes of the law as those given to the accused and the convicted,” said Sen. Hill. “I was proud to support the crime victims’ bill of rights that is now in state law. Marsy’s Law builds on that achievement by granting victims the highest level of protections possible, and that is constitutional rights.”

A state House panel says it’s time for Georgia hunters and anglers to pay more for their licenses, but the state Senate voted for a price freeze on license renewals.

“This legislation adjusts license fees to align with Southern averages,” said state Rep. Trey Rhodes, R-Greensboro, during a state House subcommittee hearing on House Bill 208, his formal proposal to raise license prices across the board.

For example, a basic annual resident hunting license would increase from $10 to $15. A one-year basic fishing license would go from $9 to $15. An adult lifetime sportsman’s license — which covers most hunting and fishing privileges — would increase from $500 to $750 for an adult aged 16 to 49. Under the bill, nonresident licenses would go up too, as do boat registration fees.

With the money, the state plans to hire 40 game wardens, Rhodes said, as well as build more and better roads to public lands and improve wildlife habitat in water and on land, among other things.

Columbus-area Democrats showed up in large numbers to a meeting hosted by local State Reps.

But the elephant in the room was the result of the 2016 election and specifically Republican President Donald Trump’s triumph.

“Usually we can hold these meetings in a small room and all sit in a circle and share our ideas,” Hugley said after the meeting. “I think people are now clearly more engaged because of the 2016 national election. I think they are looking at what they can do to get more involved.”

“Right now, I wish there were more of these,” Edmondson said as people filed out of the library located on Veterans Parkway. “I wish there were Republicans here and when they hold their meeting, I plan to attend it. I am not sure if both sides are more engaged, but I feel like the Democratic side is.”

Three Augusta lawyers hope to be appointed District Attorney by Gov. Deal, according to the Augusta Chronicle.

The candidates are Charles “Chuck” Evans, Jason Hasty and Assistant District Attorney Natalie Paine. The office of district attorney of the Augusta Judicial Circuit has been held by acting District Attorney Hank Syms since Jan. 31 when the governor swore in Ashley Wright as a superior court judge.

Wright won re-election in November to a four-year term. Gov. Nathan Deal will nominate her successor, who will then have to run for election in 2018.

My first visit to SunTrust Park will be July 9, 2017, when Metallica plays. Now you all know what to get me for my birthday, which falls sometime before the show.

DeKalb County Government plans to spend more than it brings in. Shocker!

DeKalb’s government will spend $93 million more than it takes in this year, according to the county’s proposed budget.

“The economy is up and these aren’t recessionary times, but we’re using reserves for everyday expenses,” said DeKalb Commissioner Nancy Jester, the chairwoman of the Finance, Audit & Budget Committee.

The budget calls for the county’s tax funds to finish 2017 with $33 million in savings, which is $17 million short of the county’s goal of having one month’s worth of operating funds in reserve.

Lula City Council continues working on an alcohol ordinance ahead of a November 8 referendum on liquor sales by the drink.

The City of Pooler has developed an app that allows residents to pay municipal bills online.

Savannah will get its first liquor distiller since Prohibition.

Located at 641 Indian St., the distillery will offer tours every hour, on the hour Monday through Wednesday from noon to 6 p.m. and Thursday through Saturday from 10 a.m. to 6 p.m.

The name of their first Vodka, Vodka 261, pays homage to the 261 years between the end of Georgia’s first prohibition to the establishment of Ghost Coast Distillery.

With a primary goal of creating bourbon, Ghost Coast will be distilling a wide range of spirits, handcrafted by a select team of artisan distillers.

Call me in twelve years, when the bourbon’s ready.

FetchYourNews has a summary of the candidates for Chairman of the Georgia Republican Party.

I’m currently talking to a couple of local county parties about moderating an additional debate or debates with the candidates for Chair. We’ll let you know what happens.

Check the Secretary of State’s Qualifying Database here. Candidate in bold have qualified.

First mailer of the campaign comes from Bob Gray’s campaign. 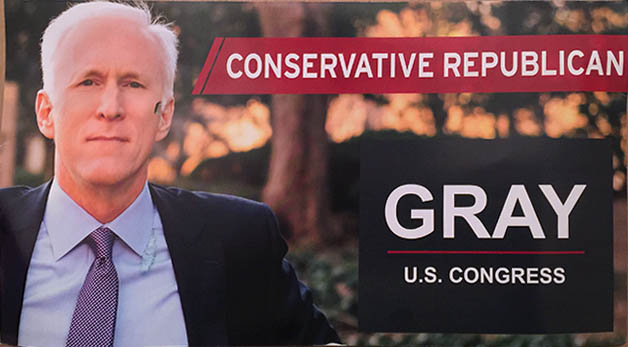 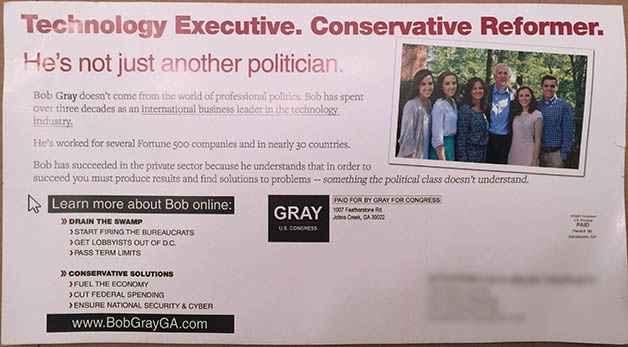