On January 20, 1788, the First African Baptist Church was established in Savannah, Georgia, one of the first black churches in the United States.

John Marshall was nominated as Chief Justice of the Supreme Court of the United States by President John Adams on January 20, 1801.

On January 20, 1920, DeForest Kelley was born in Atlanta and he grew up in Conyers. Kelley sang in the choir of his father’s church and appeared on WSB radio; he graduated from Decatur Boys High School and served in the United States Navy. Kelley became famous as Dr. Leonard “Bones” McCoy in the original Star Trek series.

On January 20, 1928, Franklin Delano Roosevelt visited Warm Springs, Georgia for the tenth time, staying through February 11th. During the visit, he spoke to the Chamber of Commerce of Americus and Sumter County, telling them

“In Georgia the movement towards the cities is growing by leaps and bounds and this means the abandonment of the farms or those farms that are not suited to the uses of agriculture. It means that we will have vacant lands but these can and should be used in growing timber.”

January 20th became Inaugural Day in 1937; when the date falls on a Sunday, a private inauguration of the President is held, with a public ceremony the following day. The Twentieth Amendment moved inauguration day from March 4 to January 20. Imagine six additional weeks of a lame duck President.

On January 20, 1939, Paul D. Coverdell was born in Des Moines, Iowa. Coverdell was one of the key figures in the development of the Georgia Republican Party.

On January 20, 1977, former Georgia Governor Jimmy Carter was inaugurated as the 39th President of the United States.

On January 20, 1981, Ronald Wilson Reagan was inaugurated 40th President of the United States.

Georgia State Patrol troopers were sworn in temporarily as Deputy United States Marshals to help with security at today’s inauguration. 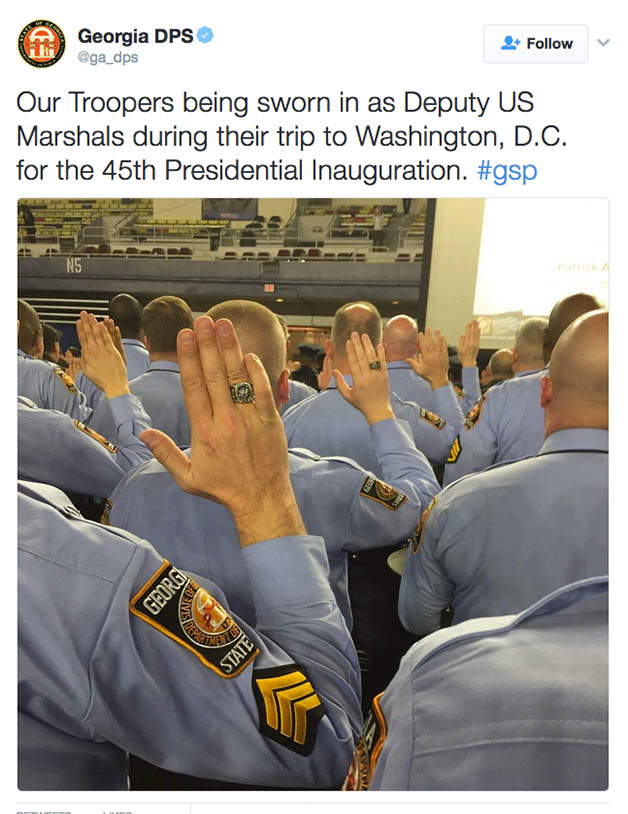 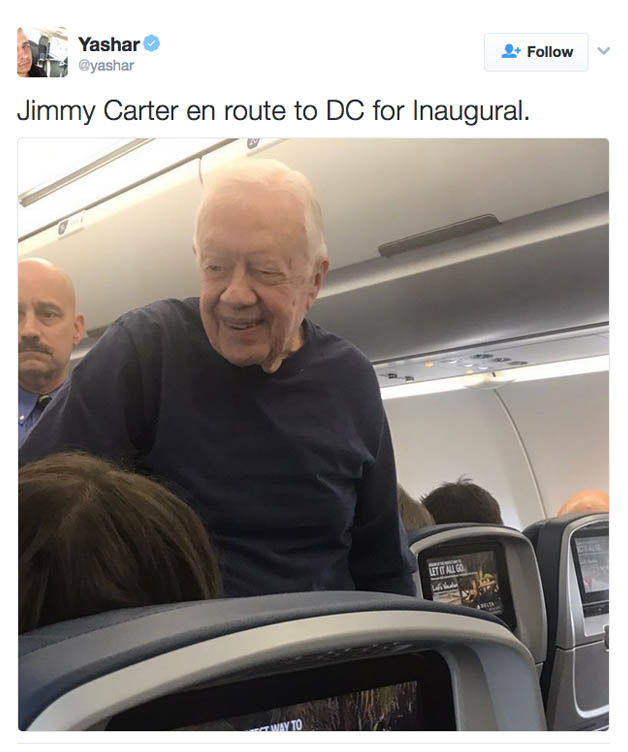 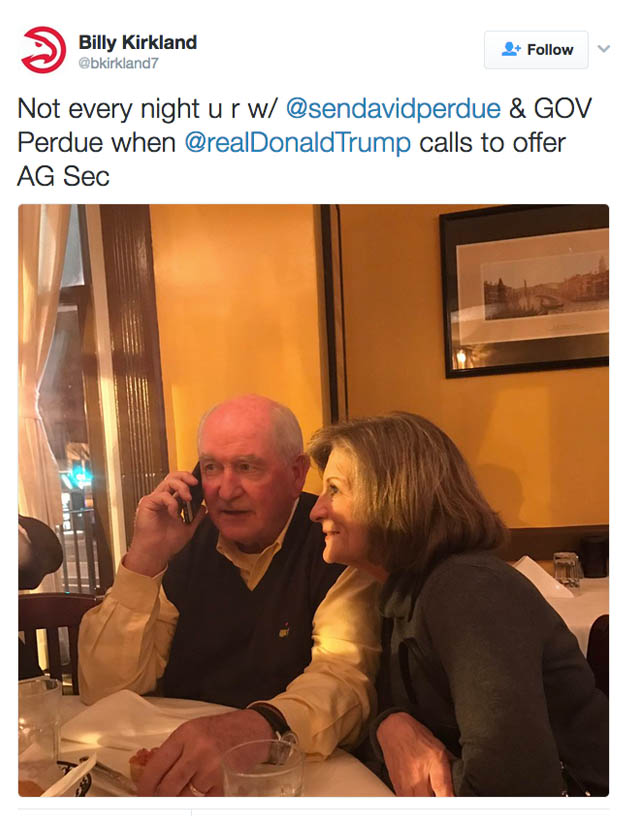 “We got a bunch of folks that’s really enjoying what we’re doing and it ain’t breaking the bank and we’re just having a good time,” said Wallace Mathis of Cordele, Ga.

Sonny Perdue was introduced as the next Secretary of Agriculture by President-elect Donald Trump.

“He came into my office two months ago. Since then, I saw 10 people that everybody liked. Politically correct. And I kept thinking back to Sonny Perdue, a great, great farmer.”

Trump said he questioned the other candidates about their farming knowledge.

“Do you have any experience with farms or agriculture?” he asked one unnamed gentleman.

“Have you ever seen a farm?” the future president followed up.

Trump praised the applicant as a “great guy” but said “I can’t make him secretary of agriculture.”

It was the literal dirt on Perdue that set him apart.

AJC Columnist Kyle Wingfield writes that he is optimistic for the Trump Presidency.

Tax reform: Trump talked a lot about fixing the U.S. tax code, and the area most in need of reform is the corporate income tax….Lowering that rate while reducing the number of exemptions would make the tax code, and companies’ tax-conscious decisions, more efficient.

Infrastructure and debt reduction: Yes, you read that correctly. One of Trump’s big talking points was the need to update our infrastructure, from roads and rails to airports….Use the money to reward states and cities that are also putting their own money into such projects, and it’d go even farther.

McDaniel is the second woman ever elected Chair of the RNC. Outgoing Chairman Reince Priebus gave his final remarks to the RNC capping the most successful run as Chairman in RNC history.

The votes electing McDaniel and Paduchik to their respective positions were both unanimous.

This November, Ronna McDaniel helped deliver Michigan for Donald Trump and the GOP for the first time in decades. She was elected as the State Chairman from Michigan in February of 2015.

Ronna served as a Trump delegate and chaired the Michigan Delegation to the 2016 Republican National Convention. She has served as a Precinct Delegate, as a District Committee Executive Member and State Committeewoman in Michigan and served as National Delegate to the Tampa Convention representing Michigan’s 11th District.

In 2013, she served as Co-Chair for the Mackinac Leadership Conference and was appointed by Governor Rick Snyder to serve on the Board of Marriage and Family Therapists.

In her local community of Northville, Ronna has served on land planning and public safety committees and is actively involved in her local PTA. She received her B.A. in English from Brigham Young University. Ronna is married to Patrick McDaniel and has two children, Abigail and Nash.

Bob Paduchik most recently served as the Ohio State Director for the Trump-Pence presidential campaign. He was the Campaign Manager for Ohio Senator Rob Portman’s successful campaign for U.S. Senate in 2010, and was the Ohio State Director for the Bush-Cheney presidential campaign in both 2000 and 2004, helping President Bush carry the state both times. From 2011 through 2015, Bob worked in a variety of roles at the American Coalition for Clean Coal Electricity, a trade association representing the coal-fueled electricity industry. From October 2001 to January 2003, Bob served as the Deputy Assistant Secretary for Intergovernmental Affairs at the U.S. Department of Energy.

I think all elected officials in this state should be concerned about something that is a blight on our state where kids are being sold and their lives are being ruined,” he said.

Echols is among those who see strong connections between Atlanta’s reputation as a strip club mecca and its designation as a top city for sex trafficking.

Georgia voters appear to make the same conclusion. In November, 83 percent of voters agreed to a constitutional amendment requiring strip clubs and other adult businesses to contribute $5,000 annually to a fund for exploited children.

Echols’ tour began downtown, cruising the bus stations that organizers say are commonly used to bring minors in and out of the city for illicit reasons. From there the tour went west to Fulton Industrial, then north to strip clubs in Sandy Springs recently raided by police there.

That the purveyors of sex with children are mostly local makes some common sense as well. An Urban Institute study from 2014 found Atlanta’s sex trade generated nearly $300 million annually. It’s unlikely anything other than a fraction of that trade could be coming from out-of-towners.

You can watch a video of the Unholy Tour on Commissioner Echols Facebook page.

A Gwinnett County Assistant District Attorney was arrested in an anti-prostitution sting in Dunwoody.

Quinn’s attorney, Noah Pines, has declined to comment on the facts of the case. But he described Quinn as “an outstanding lawyer who finds himself caught up in the system.”

Quinn turned himself in Tuesday and has been charged with pandering and violation of Georgia’s felony racketeering statute.

He is considered on leave from the DA’s office, where he works in the appeals section after years with the Fulton County District Attorney’s Office, Porter said.