Perdue — who, per the pool report, wore a tie with small tractors on it — said his talk with Trump focused on agriculture, trade and productivity.

But when asked if he was up for agriculuture secretary, Perdue said that he and Trump did not discuss a specific position.

“He asked me what my skills sets were and I told him what they were, aside from having been governor, as a business person and primarily in agricultural commodities, trading domestically and internationally, and he lit up,” Perdue said.

State Senator Judson Hill (R-East Cobb) became the first Republican candidate to throw his hat in the ring for the Sixth Congressional District.

Hill, first elected to the Georgia Senate in 2004, serves as the chair of the Senate Finance Committee. A lawyer by trade, Hill was previously an Assistant U.S. Attorney for the Northern District of Georgia during President Ronald Reagan’s administration.

“I am asking for the votes of the citizens of the Sixth Congressional District because I want to serve them as a conservative reformer,” Hill said in a statement. “I am running for Congress with a record of standing firm on principles of liberty, limited government and fiscal responsibility.”

Hill’s district in East Cobb and Fulton counties gives him a strong geographic base in a district many assume will be dominated by North Fulton.

Hill said he would continue the 6th District’s tradition of conservative representation, a record set by Price, Isakson and former House Speaker Newt Gingrich, who represented the district for 20 years. Georgia’s 6th District, which includes portions of East Cobb County and North Fulton County, has long been one of the most conservative in the country.

Karen Handel told me yesterday at the Georgia State Capitol that she’s “all but certain” to run for Congress in the Sixth District. Handel’s base would likely be stronger in her home area in North Fulton, but her experience in previous statewide elections may broaden her base in the District.

But in the 2016 GOP Primary, Cobb County voters, where a heavily-contested election for County Commission Chair drove voters to the poll, outnumbered Fulton.

While there will not be a Cobb County-wide race driving voters in a special, There’s a high likelihood that state legislative special elections to replace those candidates like Hill who are seeking the Congressional seat could be held the same day as the Congressional election, potentially driving higher voting totals in those district where they overlap with the Sixth Congressional District.

The fallout from the Sixth CD race could be substantial. If three current State Senators run for the seat, that may lead to 2 or 3 current State House members running in each Senate District. Those State House seat then would become vacant, and you’ll see potentially a number of local elected officials jumping into house races.

Most of the speculation about the Special Election for Congress has assumed that it will be essentially a Republican Primary, but it will more likely resemble a Louisiana-style “Jungle” Primary with one Republican emerging against a Democrat or Independent.

Nate Cohn of The New York Times tweeted that the Sixth District may present a pickup opportunity for Democrats, as Hillary Clinton only lost narrowly in November. 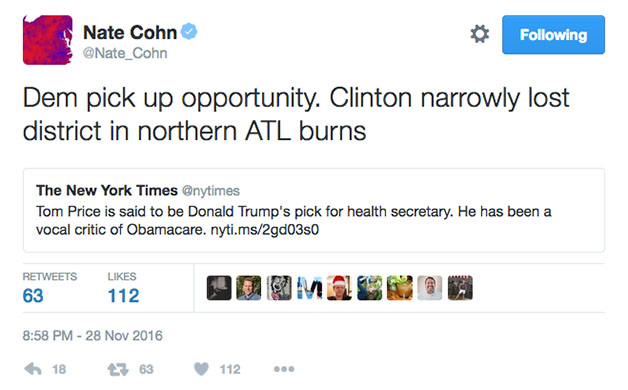 Liberals pulled out their abacuses. Starting with Daily Kos.

one safely red seat in suburban Atlanta dramatically swung to the left in 2016, and could be a Democratic target soon. Romney carried the 6th District, represented by Republican Rep. Tom Price, 61-37, but Trump took it just 48-47. The 6th is the type of very well-educated suburban seat where Trump was a poor fit.

Price himself was easily re-elected 62-38 against an unheralded Democratic opponent. However, Price may be leaving the House soon, since the congressman has been mentioned as both a potential secretary of Health and Human Services and a possible 2018 candidate for governor. But whether or not Price stays to defend this district, national Democrats should try to put this one in play.

RollCall brought a bucket of cold water to the party.

“If you look at the Obama results in that district, Democrats don’t have a prayer,” said Atlanta-based Democratic consultant Allan Crow. Mitt Romney won the district by 24 points in 2012.

But other Republicans could fare better in the district than Trump.

“Trump underperformed where Republicans normally do well in the metro counties” because he struggled with well-educated voters, said GOP consultant Chip Lake.

A congressional nominee in the 6th District likely wouldn’t have that weakness, Lake said. Price, a six-term incumbent, carried the 6th District with 62 percent of the vote. The clearest sign Republicans feel they have the advantage here may be the crowded field of potential candidates interested in replacing Price.

Democrats do have significant underlying strength in the Sixth District, and if a single Democratic candidate is on the ballot with five to seven Republicans, the Democrat will almost certainly come out of the first round of the special election, possibly even garnering first place.

This dynamic could even happen with an Independent in the race, as happened in DeKalb County in 2014 when Independent Holmes Pyle took the lion’s share of non-GOP votes, taking first place over four Republicans.

But the December 2014 runoff in DeKalb also shows us what would be the likely result in a CD-6 runoff. Republican Nancy Jester, who took second place in November 2014, consolidated GOP votes in the runoff, taking first with a commanding majority and a margin greater than 3-1.

Speaking of Nancy Jester, whose DeKalb Commission District 1 contains most of the DeKalb CD-6 votes, may have given some important hints on Facebook about the special election. 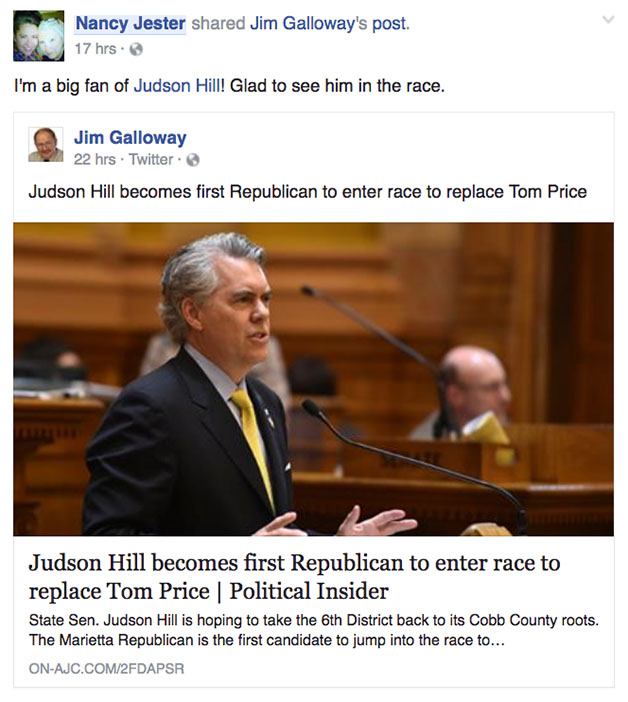 Jester might be the most formidable DeKalb candidate in the District, but that Facebook post suggests that she won’t run. But per the numbers above, support in DeKalb might provide the margin that a Fulton or Cobb candidate needs to be the GOP candidate in the runoff.

Chase Oliver has announced he will run as a Libertarian for the Sixth District.

The Georgia Court of Appeals rejected a request to reconsider its award of attorney fees to former Snellville Mayor Kelly Kautz.

The court denied the city’s motion for reconsideration in the case on Tuesday. It’s the latest development in an ongoing battle between Kautz and the city that stretches back to when she was still mayor and sued the city over a disagreement with members of the City Council over her powers versus theirs.

At the heart of this legal battle is whether the city should pay her $88,000 in attorney fees from that court battle. The Court of Appeals backed a Gwinnett County Superior Court ruling that said the city had to pay those fees.