Georgia ratified the Eleventh Amendment to the United States Constitution on November 29, 1794, which reads,

On November 29, 1947, the United Nations passed a resolution to partition Palestine and allow the creation of a Jewish state of Israel.

On November 29, 1963, President Lyndon Johnson appointed the President’s Commission on the Assassination of President Kennedy, referred to as the Warren Commission. Senator Richard B. Russell, Jr. of Georgia was appointed to the Commission.

Flags at the Georgia State Capitol will fly at half-staff today under an Executive Order by Gov. Nathan Deal.

Gov. Nathan Deal has issued an executive order that the American flag and Georgia state flag be flown at half-staff on the state capital building and grounds through sunset on Tuesday to honor U.S. Marshal Patrick Carothers.

Deal’s order said it was a mark of respect and honor for the sacrifices Carothers and others in the law enforcement community make to put their lives on the line every day. 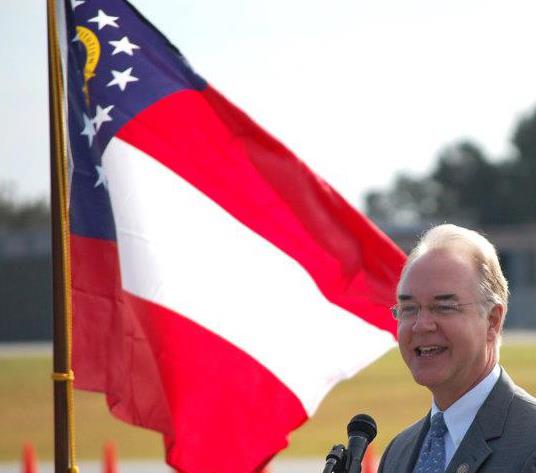 Georgia Congressman Tom Price (R-GA) is expected to be named today as Secretary of Health & Human Services under the incoming Trump administration.

An announcement of  Trump’s selection of Price, a third-generation doctor who chairs the House Budget Committee and became a fervent champion of Trump’s candidacy, is expected to be made as early as Tuesday.

Price also supports major changes to both Medicaid and Medicare, health insurance pillars of the Great Society programs of the 1960s. Under his vision, both programs would cease to be entitlements that require them to provide coverage to every person who qualifies. Instead, like many House Republicans, he wants to convert Medicaid into block grants to states – which would give them more latitude from federal requirements about eligibility rules and the medical services that must be covered for low-income Americans. This plan would also require “able-bodied” applicants to meet work requirements in order to receive health care benefits — an idea that the Obama administration has consistently rebuffed.

As HHS secretary, Price would be the nation’s top health official and the incoming administration’s point person for dismantling the sprawling 2010 health-care law, which Trump promised during his campaign to start dismantling on his first day in the Oval Office. The 62-year-old lawmaker, who represents a wealthy suburban Atlanta district, has played a leading role in the Republican opposition to the law and has helped draft several comprehensive bills to replace it.

HHS is a sprawling department with a $1 trillion budget. Its Medicare and Medicaid programs affect the lives of more than 100 million Americans young and old.  It regulates the nation’s food and drugs. Through the Centers for Disease Control and Prevention, it runs public health programs that reach into every state and around the globe. It is an engine of biomedical research through the National Institutes of Health.

[F]ormer House speaker Newt Gingrich tweeted: “Congressman Tom Price will be a great Secretary of Health and Human Services. He is the right leader to help Congress replace Obamacare.”

Fox News writes about what Price’s nomination will mean for healthcare.

Last week, Price said whatever Republicans do to replace Obama’s health care law will bear a “significant resemblance” to a 2015 measure that was vetoed by the president. That bill would have gutted some of the health care law’s main features: Medicaid expansion, subsidies to help middle-class Americans buy private policies, the tax penalties for individuals who refused to get coverage and several taxes to support coverage expansion. The bill would have delayed implementation for two years.

Price insisted that Republicans can keep the protections for those with existing medical conditions without mandating that all individuals carry coverage or pay a penalty to support an expanded insurance pool. Price said Republicans want to address “the real cost drivers” of health care price spikes, which he said were not necessarily sicker patients, but a heavy regulatory burden, taxes and lawsuits against medical professionals.

A Special Election to replace Rep. Price could be scheduled for February 21, 2017 at the earliest.

Kyle Wingfield looks at how the dominoes may fall once Price is confirmed.

The domino effect will be real. Greg’s list includes six state legislators: three apiece from the House and Senate. Running in a special election would normally allow them to give it a shot without giving up their seats — but because this special election will could take place during the 2017 session, at least a couple of them might resign their seats to campaign full-time. There’s precedent for that: Both Tom Graves and Lee Hawkins stepped down from the General Assembly in 2010 to run for Nathan Deal’s congressional seat, which Graves won. Some of the names on the list could instead seek offices vacated by those running for Congress.

There’s also a 2018 effect here. It was well-known Price was strongly considering a run for governor in two years. That would now seem to be off the table. That could draw another congressman into the race. (Just spit-balling here: Graves? Doug Collins?) Or a non-congressman. Or it could simply boost the chances of others running to succeed Gov. Deal.

Wingfield writes in a separate column about the role of the Georgia Rural Healthcare 180 tax credit in helping stabilize hospitals.

The credit is the brainchild of state Rep. Geoff Duncan, R-Cumming, who modeled it after Georgia’s existing tax-credit scholarship program. Donors to eligible rural hospitals can file for a credit on their state income taxes (individual or corporate). Legislators approved it late in the 2016 session, putting $50 million in the pot for next year, $60 million for 2018 and $70 million for 2019.

The credit is worth only 70 percent of the donation — the scholarship credit is dollar-for-dollar — so no one knows what to expect when it goes live Jan. 1. But officials at four rural hospitals I visited during a South Georgia swing this month expressed hope it will help them bridge a very precarious financial gap.

The economics of health care is broken, and nowhere is this more evident than in rural hospitals. Phoebe Worth [Medical Center in Sylvester, GA] reports providing more than $8.4 million in charity and indigent care last year, plus almost triple that amount in uncompensated Medicare and Medicaid services. The new private plans on the Obamacare exchanges have hardly helped: Most carry such high deductibles that neither patients nor hospitals get paid.

The state needs a broader overhaul of health care (hint, hint, aspiring governors). This new tax credit may be rural hospitals’ best bet for surviving until that happens.

Candidates in South Fulton are lining up for a chance to run for office in the new City of South Fulton.

Rafer Johnson, a former candidate for State House, has been involved in previous efforts to form a new city. He announced Monday that he is running for mayor of the new city.

Elections will be held in March.

Other hopefuls are expected to announce their interest in running at a Tuesday forum at Cliftondale Church in College Park. There, state rep. LaDawn Jones, D-Atlanta, will host a conversation about the city’s formation that included an invitation for prospective candidates to introduce themselves.

Governor Nathan Deal removed the members of the Dooly County Board of Education yesterday and named a committee to nominate replacements.

Acting on the recommendation of the State Board of Education, Gov. Nathan Deal [] suspended five members of the Dooly County school board. Deal announced that he has appointed a panel to nominate replacements and has tapped Martha Ann Todd, executive director of the Governor’s Office of Student Achievement (GOSA), to act as his liaison to the Dooly County school board and Interim Superintendent Celeta Thomas.

“Based on a recommendation from the State Board of Education, I have suspended all members of the Dooly County school board,” said Deal. “These suspensions are necessary to begin work to ensure that Dooly County School System will keep its accreditation and give the more than 1,500 students in the county a fair chance at a quality education. I have the utmost confidence that the members of this panel will help put the Dooly County schools back on track by nominating replacements who will work effectively with Martha Ann and Interim Superintendent Thomas to provide the best outcomes for the children of Dooly County.”

State Rep. Christian Coomer (R-Cartersville) has named the team that will help him as Majority Whip in the State House.

The deputy whip team also will include:

Voters in majority-black precincts in Atlanta voted nearly 70% against the Opportunity School District.

In a special election Ray Paulk was elected to finish out Heath’s term.

Now, Sheriff Paulk is facing off against Frank Swanson to serve a full-term as Sheriff starting next year.

Early voting will be open at the elections office from 8 a.m.-4:30 p.m until Friday, December 2.

Chuck Horton, a former county commissioner and former chairman of the Oconee County Board of Education is vying with political newcomer Marcus Wiedower for the Post 2 seat on the county commission. The Post 2 seat was vacated when John Daniell resigned earlier this year to run for the commission chairman position. Daniell ran unopposed for the chairmanship and in January will replace longtime chairman Melvin Davis, who did not seek a fifth four-year term.

Early voting for the runoff is being held at the Oconee County Board of Elections and Registration Office at 10 Court St. in downtown Watkinsville near the county courthouse.

Henry County residents may advance vote in the runoff election for County Chair.

Polls will be open Election Day from 7 a.m. to 7 p.m. at your local precinct.

[L]ocal Democrats say they are poised to solidify gains and reach out to moderates and independents who may be turned off by President-elect Donald Trump.

Clinton lost the election, but she won the traditionally conservative Atlanta suburb with 51 percent of the vote to Trump’s 48 percent. Statewide, Trump won Georgia by five points, a smaller margin than his Republican predecessors.

Michael Owens, who was elected as the new chair of the Cobb Democratic Party following the election, tempered the victory, saying “I haven’t used the phrase ‘Cobb’s turned blue.’”

But, he said, “We’ve proven now that we can win races county-wide. … We still have a lot of work to do.”

DeBose Porter, chair of the Georgia Democratic Party, described the electoral shift in Cobb as a sea change.

“Cobb County has always been a bellwether county,” he said.