On August 10, 1774, a group calling itself the “Sons of Liberty” met at Tondee’s Tavern in Savannah, the first move in Georgia toward what would become the Revolutionary War. The Sons of Liberty adopted eight resolutions, among those one that reads,

Resolved, nemine contradicente, That we apprehend the Parliament of Great Britain hath not, nor ever had, any right to tax his Majesty’s American subjects; for it is evident beyond contradiction, the constitution admits of no taxation without representation; that they are coeval and inseparable; and every demand for the support of government should be by requisition made to the several houses of representatives.

Resolved, nemine contradicente, That we concur with our sister colonies in every constitutional measure to obtain redress of American grievances, and will by every lawful means in our power, maintain those inestimable blessings for which we are indebted to God and the Constitution of our country–a Constitution founded upon reason and justice, and the indelible rights of mankind. 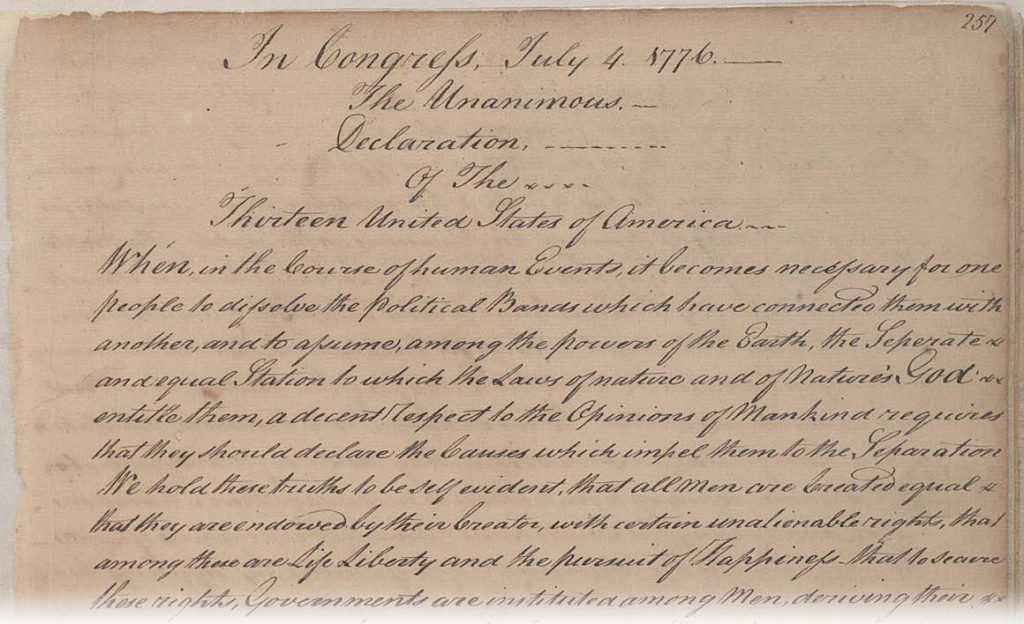 Georgia’s Copy of the Declaration of Independence, currently at the Georgia State Archives.

The first copy in Georgia of the Declaration of Independence was read publicly in Savannah on August 10, 1776.

Missouri was admitted as the 24th State, and the first entirely west of the Mississippi River, on August 10, 1821.

On August 10, 1864, the bombardment of Atlanta by Union force continued, with Sherman writing, ““Let us destroy Atlanta and make it a desolation.” 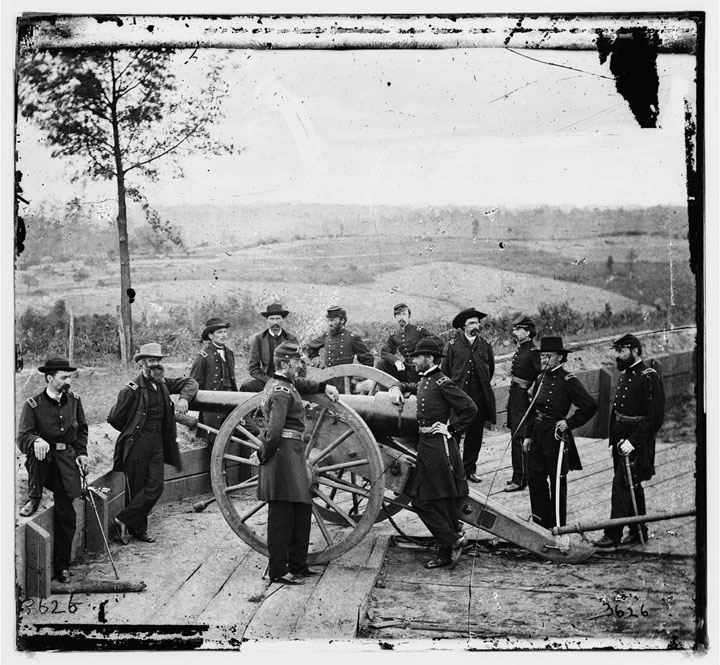 Japan accepted unconditional surrender on August 10, 1945, one day after the atomic bombing of Nagasaki.

Hillary Clinton’s presidential campaign may be making a push into Georgia, according to the Washington Post.

Representatives of Hillary Clinton’s campaign phoned state Democratic leaders in Arizona and Georgia this week to alert them of plans to begin transferring funds to hire more field organizers in those states, according to several Democratic officials familiar with the calls.

Polls in both states — which Republican nominee Mitt Romney carried in 2012 — show a tightening race between Clinton and Donald Trump. The move by the Clinton campaign suggests a bid to expand the number of battleground states in play in November.

A Democrat familiar with the campaign’s plans said the outlays in Arizona and Georgia would be “in the six figures” for now, with plans to use the money to hire staff. No television ads are in the works, the Democrats said.

Rebecca DeHart, executive director of the Georgia Democratic Party, confirmed that she heard from Clinton campaign officials Monday night. “We look forward to working with the Clinton campaign over the coming months here in Georgia, and are excited about their interest in the state,” she said in a statement. “Secretary Clinton overwhelmingly carried this state in the Primary election and we stand ready to deliver GA to her in November.”

But maybe it’s just a head-fake. From CNN:

The potential Democratic investment in Georgia and Arizona is less about a sure-fire belief that Clinton will win them, but rather to expand the battleground map and make Trump fights hard for those two red states. Though that’s all hypothetical, as an outside group that takes its cues from the Clinton campaign says it has no plans currently to play in Arizona and Georgia.

Still the Clinton campaign has incentive to talk up efforts in those states. If the Trump campaign is forced to concentrate on Georgia and Arizona, it consumes time and money he could be devoting elsewhere.

A Clinton adviser says this exploratory effort is designed to “force Trump to fight for Arizona and Georgia.”

Gainesville lawyer Ashley Bell will be splitting his time between Georgia and Washington, DC to help the Republican National Committee.

Former Hall County Commissioner Ashley Bell has joined the Republican National Committee as a senior strategist and national director of African-American political engagement, a move that could direct his efforts back home to Georgia.

Bell said he plans to work alongside communications and policy experts to ensure “we have an effective plan in all battleground states.”

Republicans have dominated Georgia politics in the 21st century, “so normally this would not be an issue,” Bell said.

Consolidating the GOP’s base, making the case against Hillary Clinton and developing inroads that “resonates with people of color,” Bell said, are critical now that “Georgia will be a part of the big picture” on Election Day.

“With these new additions to our strategic initiatives team, we are growing our long-term commitment to engaging with black voters and being the party that promotes new models to solve old problems,” RNC Chairman Reince Priebus said in a statement. “One of the RNC’s key goals has been to take our message to the black community and make the case why we are the only party capable of delivering prosperity, security and freedom for every neighborhood in America.”

A ten-vote margin in the Primary Runoff election between Tonya Anderson and Dee Dawkins-Haigler in Senate District 43 and a request by the losing candidate triggered a recount order by Secretary of State Brian Kemp.

Dorothea “Dee” Dawkins-Haigler requested a recount this morning after losing by ten votes to Tonya Anderson.

“In Georgia, a losing candidate can request a recount if it is submitted in writing to the office’s Elections Division within two business days after certifying election results, which occurred on August 5,” stated Secretary Kemp. “To request such a recount, the difference in ballots cast for the top two vote-getters cannot be more than 1%.”

“We went through a really long process” — the Iowa caucuses kicked off the presidential nomination process in February — “and we got the candidate we got,” Kemp, a Republican, told the Athens GOP at its regular monthly meeting.

“And he won fair and square,” Kemp, an Athens native who served in the state Senate before being elected secretary of state, added to punctuate his Monday remarks.

“I get where people are with Trump and some of the other candidates, but I’m a firm believer in the process,” Kemp said.

Among an itinerary that makes him among the Members of Congress who travel most frequently on other people’s money, Congressman Hank Johnson traveled to the West Bank at the expense of a pro-Palestinian organization. Kind of puts his comments about Jewish settlers in context.

Gala Sheats-Hester will serve on the Hall County Board of Elections as the Democratic member.

Courtney Dillard failed to turn in enough valid signatures to get on the ballot as an independent candidate for Rockdale County Commission.

Dillard received word from Cynthia Welch, Rockdale County elections supervisor, that he did not have the required 2,534 voter signatures needed to qualify as an independent candidate.

“We met with Mr. Dillard yesterday (Monday) on his petition,” Welch said. “It did not pass. We did not receive the required 2,534 voter signatures. So he will not be an independent candidate on the ballot in November.

“He had 1,373 good signatures,” Welch stated. “He submitted a total of 2,565 petitioners’ names. Of that, 1,192 were not valid for different reasons of not being registered, or did not sign the petition or we could not verify the signature, or we found them registered in other counties.”

Fulton County Commissioners voted to add a sales tax hike (or hikes) to the November ballot.

Fulton County commissioners agreed to put the taxes on the ballot at a meeting Tuesday. In Atlanta, residents will vote on a 0.4-cent sales tax to fund transportation improvements. (A half-penny sales tax to benefit MARTA in the city had already been added to the ballot.)

Outside of Atlanta, residents will vote on a 0.75-cent sales tax. If approved, it is expected to raise up to $655 million for transportation needs.