Georgia Politics, Campaigns, and Elections for May 13, 2015

Georgia Politics, Campaigns, and Elections for May 13, 2015

Dispatched from England by the London Company, the colonists had sailed across the Atlantic aboard the Susan Constant,Godspeed, and Discovery. Upon landing at Jamestown, the first colonial council was held by seven settlers whose names had been chosen and placed in a sealed box by King James I. The council, which included Captain John Smith, an English adventurer, chose Edward Wingfield as its first president.

Lyman Hall arrived in Philadelphia as a delegate to the Second Continental Congress on May 13, 1775.

Georgia Whigs, led by Governor George Crawford, Alexander Stephens, and Robert Toombs, criticized the war for raising divisive questions about slavery in the territories. Georgia Democrats, led by Howell Cobb and Herschel Johnson, staunchly supported the war and states’ rights afterward. Because Whigs, nationally, appeared to be antislavery, Georgia Whigs lost the governorship in 1847. The Compromise of 1850 temporarily settled the slavery question in the territories, but the moderating influence of Georgia’s Whigs dissolved in the heated rhetoric of states’ rights in the 1850s. The next war would find Americans fighting Americans.

The first fighting at Resaca, Georgia took place on May 13, 1864 and Union forces marched into Dalton. On May 13, 1864, 257 cadets from the Virginia Military Institute camped at Mt. Crawford near Harrisonburg.The next day they would continue their march to New Market, Virginia.

On May 13, 2005, the Pentagon Base Realignment and Closure Commission (BRAC) recommended the closing of Fort McPherson in Atlanta, Fort Gillem in Forest Park, the Naval Air Station in Marietta, and the Naval Supply Corps School in Athens.

Tomorrow has the only mandatory Saturday early voting for the May 24 primary elections, meaning that every county elections board will have early voting hours. Click here to sign in to the Secretary of State’s MVP webpage and check your local early voting locations. 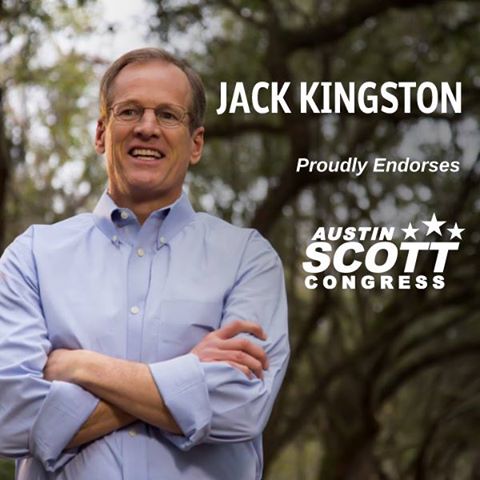 Not only is Austin Scott a great conservative who is fighting to protect the unborn, defend our 2nd Amendment rights and repeal Obamacare, he cares very deeply about supporting our military and our war fighters.

The 8th District needs Austin Scott to keep up the fight, and Georgia needs him at the table as well. I am proud to endorse my friend Austin Scott in his re-election, he has stepped up to the plate and gone to bat for our military and Georgia’s military communities year after year, and I know he will continue to make the people of Middle and South Georgia proud.

Learn more about Austin Scott for Georgia at The 8th District needs Austin Scott to keep up the fight, and Georgia needs him at the table as well. I am proud to endorse my friend Austin Scott in his re-election, he has stepped up to the plate and gone to bat for our military and Georgia’s military communities year after year, and I know he will continue to make the people of Middle and South Georgia proud.

Learn more about Austin Scott for Georgia at www.scottforga.com

Here are the latest television ads in the Third Congressional District.

On how to balance Republican misgivings with Trump, especially among minority voters:

“Donald Trump doesn’t stop me from minority engagement, from shaping and transforming the structure of the Georgia Republican Party so we’re more financially solvent. He doesn’t stop me from messaging, from strategically creating partnerships with independent expenditure groups. … When we lose sight of that and blame one person, that’s scapegoat-ism. And I’m not going to use him as a scapegoat to absolve my responsibility.

“I’m finding some of my strongest and most stalwart warriors right now are black Americans. We’re underestimating the type of support Donald Trump can get in the race. Donald Trump can easily get 20 percent of black voters.”

On his most immediate goals:

“We have a long-term goal and that’s party stability. Our party in general views that it isn’t efficient to support voter education drives. And as we mature, I think it will be viewed as a must for us. How can we know what makes American exceptional unless we educate people about the facts?”

“I have a meeting soon with 10 investors who want to shore up minority engagement in Georgia for the long term. If we can create a strong best-practices in Georgia, we can create a template for the whole nation. My goal is to keep Georgia red and create a systemic template for minority engagement that’s effective, affordable and aspirational. It will be something that builds team morale for the entire party.”

The Associated Press takes a look at “outsider” candidates in Georgia Congressional races and the hurdles they face.

Both incumbents are under fire for supporting John Boehner in his final bid for Speaker of the House over long-shot challengers and for backing a spending bill.

“I think we are seeing this in different parts of the country and we are seeing challengers from outside the political realm,” Swint said. “But challenges from the right in the Republican Party aren’t unusual either.”

“It’s always an uphill battle when you go against an incumbent because they have so much advantage in money and a network that (challengers) have to build,” [Mike] Scupin said. “And they know that, so they go up there and vote any way they want.”

“It’s not an insider-outsider issue, it’s about doing what’s best for constituents,” Collins said. “I think when you look at our record, it’s close to home and not representing the rhetoric of passing time in Washington.”

“The biggest thing this year is that I have a proven record,” Loudermilk said. “Action speaks louder than lies in a mailbox.”

“We have to give Donald Trump the prize for people opening their eyes, because now people are saying ‘Hey, we want change,’” said Davis, who decided not to accept campaign contributions.

And earlier in the week, the Wall Street Journal touched on Georgia in a story about outsider candidates.

“This is the man I’ve been looking for,” Georgia GOP congressional candidate Eugene Yu recalls saying when Mr. Trump announced his White House bid nearly 11 months ago. “Everything he says, I’ve been saying all along.”

An immigrant from South Korea, Mr. Yu supports Mr. Trump’s plan to build a wall on the U.S.-Mexico border. He said he came to this country legally as a teenager, and on his campaign website he writes, “If you are here illegally YOU NEED TO LEAVE!”

The retired business owner from Augusta, who ran for the same congressional seat in 2014, also backs Mr. Trump’s proposal to ban Muslims from entering the U.S., saying it is a matter of common sense.

Todd Rehm, a Republican strategist from Georgia, said down-ballot contenders often try to emulate the messaging and strategy they see at the top of the ticket. But much of what has been effective for the former reality TV star likely wouldn’t translate on a smaller stage, he said. “The theatricality Trump brings really only works in the theater,” he said.

The Third Man in Senate District 19

Because all of the craziness in the Senate District 19 campaign revolves around two candidates, I didn’t mention the third candidate in the Republican Primary, Kevin Parker. Because he brought it to my attention nicely, here’s a little bit about Kevin.

As President of the Georgia Small Business Council, Parker spends time advocating for small business in Atlanta and says his platform has three major planks.

“Georgia needs jobs and you create jobs by lowering taxes and transforming our tax system. We need to eliminate the state income tax on personal and corporations and replace it with a simple Fair Sales tax.

“The second is to sunset all the unneeded regulations that we have. Regulations strangle the life out of small business and our educators. Our teachers are the ones who train our children to fill the high paying jobs that Tax Reform will produce..

“The third leg is to transform our education system so that federal and state government block grant the education funds back to the local school districts. Each school district then serves as a laboratory to decide how we best educate our children. Our educators are the most innovative and creative people in the world. Today they are forced to teach kids how to pass numerous tests. We need to free the most creative people on earth to teach and educate our children the right way. Our children need to learn to respect authority and we need to put corporal punishment back in the school system,” Parker said.

“I have a tremendous amount of support throughout the district. I am not just a single county candidate. Small business owners support me almost hundred percent. My message is very well received, because I am truly a Conservative –Christian-Constitutional candidate,” he says.

Parker also says, if elected he will sponsor a stronger version of the Religious Freedom Bill than the one Governor Nathan Deal vetoed. (Picture courtesy of Vidalia Communications).