Lyman Hall was elected to the Continental Congress on March 21, 1775 from St. John’s Parish; the next year he would sign the Declaration of Independence as a representative from Georgia.

On March 21, 1941, Governor Eugene Talmadge signed legislation establishing the Eastern Standard Time Zone as the only Time Zone in Georgia. Prior to that, Georgia observed two different time zones.

On March 21, 1980, President Jimmy Carter announced the U.S. boycott of the 1980 Summer Olympics in Moscow.

The Georgia General Assembly has two final working days in the 2016 Session. Tomorrow will be Day 39, with the 40th and final legislative day on Thursday.

Among the legislation still to be finalized in the legislature, according to the Gainesville Times,

Approving a budget is the only constitutionally required measure that must be passed before the close of the session, and negotiations are expected to include debate over a spending plan that would increase salaries for thousands of state employees and teachers and give state retirees a one-time boost.

Both chambers have voiced support for Deal’s recommendation to allocate $300 million to local school districts. These funds are intended to end furloughs and lengthen school years after cuts during the recession.

A constitutional amendment setting English as the “official” language of Georgia has failed to make it out of House committee. Sponsoring Sen. Josh McKoon said the hope was to get a floor vote in the House after receiving 39 votes in the Senate. The legislation needs two-thirds support to pass the House.

A bill to set a flat state income tax rate of 5.4 percent requires House agreement to become law. The Senate has passed the measure. Critics argue that the adjustment in tax rates would only serve to help those in higher tax brackets. The decrease would lower the state’s maximum income tax rate down from 6 percent.

Deal and his staff have remained wary of any tax cut proposal, concerned about harming the state’s bond rating and ability to borrow money. Deal also has made it a priority to build up the state’s “rainy day” fund before his final term in office ends.

After last week’s suprise withdrawal by State Rep. Tom Weldon (R-Ringgold), which left DeWayne Hill as the only candidate for State House District 3, the Catoosa County Republican Party is asking the Georgia GOP to reopen candidate qualifying to allow others to run for the seat.

Delegates to the Catoosa County Republican Party Convention voted Saturday to ask state Rep. Tom Weldon to formally withdraw from the race, assuming that is still his plan. If Weldon does so, the Catoosa GOP will also ask Georgia’s Republican to reopen qualifying for Weldon’s seat in the May 24 primary election.

Weldon, R-Ringgold, submitted paperwork to run for re-election March 7. Dewayne Hill, a former Catoosa County commission, qualified to challenge him on March 11 — the last day to register to run.

On Thursday, Weldon told the Times Free Press he is going to bow out, leaving Hill with no competition.

Some Catoosa Republicans don’t like the idea of Hill running unopposed. Local party chairwoman Denise Burns said Saturday the field would be more crowded if people knew Weldon, an eight-year incumbent, was not going to run.

“Tom Weldon had a great deal of respect,” she said. “People generally viewed him as a valuable and competent representative. Based on that reputation, to challenge an incumbent is a very daunting task. Lots of people would have considered running for this seat [if they knew it was open].”

The county leadership will ask the state’s Republican leadership to send a certified letter to Weldon, asking him to formally withdraw at the Georgia Secretary of State’s Office within three days — if Weldon still plans to exit.

Assuming his decision holds, the county GOP will [ask] the state party to re-open the qualifying period for Weldon’s seat. That’s allowable if a candidate dies or the incumbent withdraws.

An arrest on two charges of aggravated assault can certainly derail a campaign for local office still. From the Bainbridge Post-Searchlight,

Ryan Shirley announced today that he will suspend his campaign for Decatur County Tax Commissioner.

“The goal of my campaign to be Decatur County’s next Tax Commissioner was always to better the community where I was born and raised and currently raise my children,” Shirley said in a released statement. “My desire is to try to leave Bainbridge a better place so my children will want to raise their families here.”

Shirley cited his recent arrest on two counts of Aggravated Assault as a factor in his decision to suspend the campaign.

“Unfortunately, I have been presented with a legal issue that must be taken very seriously,” Shirley continued. “I quickly realized that I do not have the ability to fight for the future and well-being of my family and successfully complete a campaign for Decatur County Tax Commissioner. For this reason, I have decided to suspend my campaign. While I can assure everyone that I will be exonerated of these charges, my energies will be divided while I continue the legal process. I cannot in good faith, ask for public support when I realize I cannot be completely focused on my campaign.”

The National Football League has decided that taking millions of dollars of tax money from Georgia isn’t enough – they want to dictate whether Gov. Deal signs religious liberty legislation or vetoes it. From Fox News,

The NFL came out against a proposed religious exemptions bill in Georgia Friday, saying the deal could have an effect on the Super Bowl selection process for 2019 and 2020.

Atlanta is one of the finalists for the next two league title games to be awarded, along with New Orleans, Miami and Tampa. The city is considered a clear favorite because of its new retractable-roof stadium that is set to open next year. However, the religious exemptions bill could change all of that.

“NFL policies emphasize tolerance and inclusiveness, and prohibit discrimination based on age, gender, race, religion, sexual orientation, or any other improper standard,” league spokesman Brian McCarthy said. “Whether the laws and regulations of a state and local community are consistent with these policies would be one of many factors NFL owners may use to evaluate potential Super Bowl host sites.”

This week, lawmakers also approved the elimination of $10 million in state sales taxes on Super Bowl tickets if Atlanta lands the game.

Seriously, does anybody remember the last time Georgia hosted the Super Bowl? Speaking of “tolerance,” among the things the NFL has been accused of tolerating: domestic violence by players.

Secured entrances and video cameras are among the expenditures driving new school spending, according to the Macon Telegraph.

As Middle Georgia school systems identify projects for their districts, usually through sales tax initiatives, safety and security measures are often a priority.

Bibb and Houston counties are eyeing camera systems, intrusion alarms and other measures, and all that came after Peach County decided to build an entirely new high school partially in response to security concerns.

“The safety and security of our students is always our first priority,” said Mike Kemp, Bibb County’s assistant superintendent for technology services.

Kemp’s department is overseeing the installation of camera systems in classrooms, which started with Ballard-Hudson Middle School. While the cameras have other functions, they’ll work with pre-existing surveillance systems in the hallways and building exteriors to further tighten up the facilities.

Baldwin County is among those beefing up school security with E-SPLOST proceeds.

With voters’ approval in last November’s election, the current 1 percent sales tax for education will be extended for an additional five years.

The extension for the school system is for a $37.5 million collection cap or five years, whichever comes first.

In an effort to better protect Baldwin County’s students, teachers and staff, the local public school district is preparing to implement major upgrades to school security by utilizing the 1-cent sales tax funds.

During a board retreat at Central Georgia Technical College, Baldwin County school board members, district personnel, and administration met with representatives from the architecture and engineering firm Goodwyn, Mills and Cawood (GMC) to discuss plans for additional security features at each school facility.

Improvement suggestions made by Bell for Baldwin’s public schools and the board of education building were more secure vestibules, magnetic strip recognition entry devices, buzzer controlled locked doors and additional security cameras, among other features.

If you thought the awarding of delegates from Georgia to the Republican National Convention was finished, you might be surprised that this weekend’s Georgia Republican Party County Conventions continued the selection process. From the AJC Political Insider,

The most interesting portion of the [Cobb County Convention] was an information session with Randy Evans, a Republican National Committee member from Georgia – who elaborated on a post he sent us yesterday, on what’s likely to happen in Cleveland. And what’s not.

On his existing trajectory, Evans said, billionaire Donald Trump is likely to enter Cleveland 75 or 100 short of the 1,237 needed for outright nomination.

However, should the current three-man GOP race whittle itself down to two candidates, Evans said, things change. Most of the remaining states that award delegates proportionally have an “escape” clause. If a single candidate wins more than 50 percent of the vote, then the awarding of delegates shifts from proportional to winner-take-all.

“It’s ‘way more likely than not that we end up with a presumptive nominee. It’s not that I know some inside secret. It’s that I know how the process that I designed actually works,” Evans said.

Another issue the RNC is likely to take up at its April meeting is the status of delegates belonging to candidates who have suspended their campaigns. “There’s a genuine debate on the rules committee, as to how a suspended candidacy or a terminated or withdrawn candidacy operates to release their delegates.

Randy Evans also made an appearance on FoxBusiness, discussing the convention and how delegate binding works.

And the Wall Street Journal discusses what happens to bound delegates whose candidates have withdrawn from the campaign. 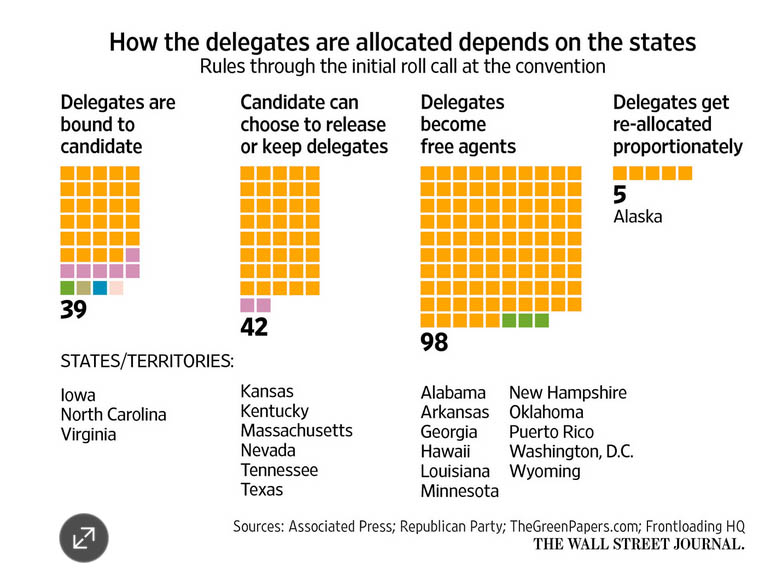 [H]istory suggests that there is no relationship between primary turnout and the general election outcome. You can see this on the most basic level by looking at raw turnout in years in which both parties had competitive primaries. There have been six of those years in the modern era: 1976, 1980, 1988, 1992, 2000 and 2008.

My impression from the DeKalb County Republican Convention was that there were not a whole lot of new people participating – maybe a handful of newbies – though that might reflect very low turnout for the DeKalb Convention. It appeared that attendance was down significantly from prior years, and that many of the Ron Paul/Liberty members were not in attendance – meaning those who came in 2012 or 2014 because of that movement, not those who were already embedded in the County party. But I did see this on a delegate: 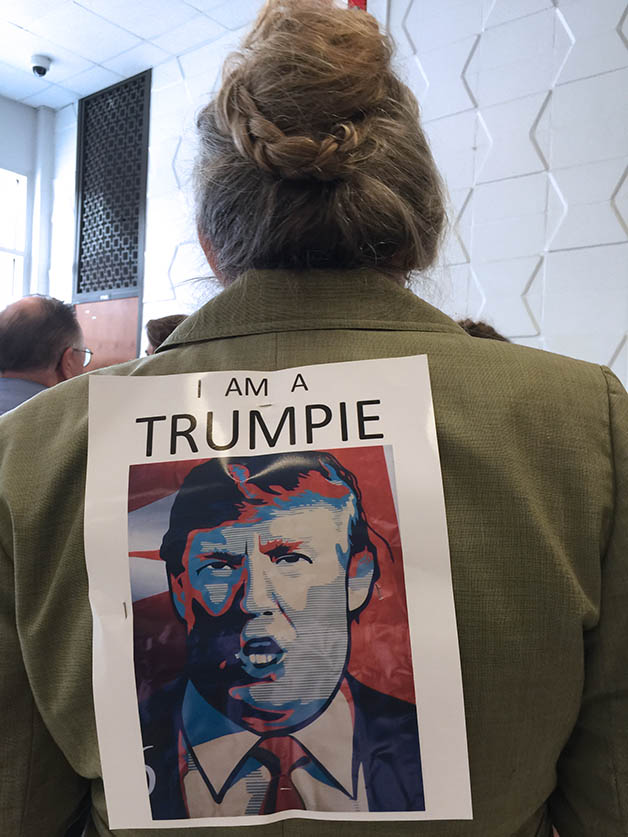