On March 10, 1734, a group of German immigrants reached the mouth of the Savannah River, from where they would proceed on to Savannah. Today, the Georgia Salzburgers Society works to preserve the Salzburger heritage and traditions in Georgia.

On March 10, 1866, Governor Charles Jones Jenkins signed legislation allowing women to have bank accounts separate from their husbands as long as the balance was less than $2000; an earlier act set the limit at $1000.

On March 10, 1876, Alexander Graham Bell transmitted the first speech over his new invention, the telephone.

Thomas B. Murphy was born on March 10, 1924 in Bremen, Georgia and would first be elected to office in the 1950s, winning a seat on the Bremen Board of Education. In 1960, Murphy ran for the State House facing no opposition and was sworn in in 1961. In 1973, he became Speaker Murphy and would hold the post until Bill Heath, a Republican, beat him in the November 2002 General Election.

Murphy held the top House seat for longer than anyone in any American state legislature. He died on December 17, 2007.

Senate Bill 278 by Renee Unterman (R-Buford), which would increase penalties for pimping and pandering was given a do pass recommendation by a House Committee yesterday. The bill passed the Senate 53-0.  From 11Alive,

For many years, Georgia’s prostitution laws made criminals of the women who plied their trade on darkened streets and over cyberspace.  But as studies showed that many of those “women” were really children – the state began to change its approach.  Now lawmakers want to target customers – and the pimps who broker the trade.

Pimps “got a slap on the wrist, they made their bond, they were back on the street doing their usual business,” said Sen. Renee Unterman (R-Buford).

Unterman has been behind much of the reform of Georgia’s prostitution laws.  State law currently makes pimping a misdemeanor.  Unterman’s new bill would make pimping a felony.  It would also go after customers – making solicitation a felony upon a second conviction.

It would also put convicted twice-convicted customers on the state’s sex offender registry.

The proposal is intended to limit the influence of the local district attorney in these cases. They work closely with police in their district every day and critics say that relationship can create an appearance of conflict of interest or raise suspicions of political influence that chips away at the public’s confidence in the outcomes.

“It would remove as much as humanly possible any political pressures with regard to the exercise of prosecutorial discretion as to whether or not to prosecute a case,” said Keith Higgins, a former prosecutor in the Brunswick office, who testified Wednesday at a Senate Non-Civil Judiciary Committee hearing. “It would also make sure the abuses that were committed by the elected DA in the Caroline Small case would never again happen in this state.”

The Second Congressional District (lower-left hand corner) is having a party, with three Republican candidates qualifying to take on Democratic incumbent Sanford Bishop.

“Bobby Scott, an attorney in Columbus, qualified on Monday and will be challenging incumbent Congressman Sanford Bishop in the 2nd Congressional District.”

I’m not going to be an establishment kind of candidate. Nor am I one of those career politicians. I’m a guy that has worked hard my entire life and had to earn everything I got to get where I am today. I will go to Washington and let them know we have had enough. Southwest Georgia deserves better. It is our time now!

He’s apparently one of those mythical “outsider” candidates that Greg Bluestein wrote about the other day.

Air Force Veteran turned businessman, Republican David Crocker qualified to run against the incumbent in State House district 105. Crocker is a “real Conservative” – not someone who simply campaigns as one. He believes we need to clean house of most politicians.

This will be Crocker’s first run for public office. Some may say he is an “outsider” to politics. He believes this is positive considering the state of insider politicians currently running (ruining) our nation. It’s time to clean house.

Crocker stated, “Politicians have no idea what those of us at home are concerned about. I’m going to roll up my sleeves and get to work cleaning up this mess.” He continued, “I first became interested in politics in 1984 when I voted for Ronald Reagan. He was willing to challenge the status quo. He wasn’t afraid to say and do what needed to be done. We need to bring back that kind of leadership.”

Senate Republicans and their Challengers

So far, it looks like incumbent Senators across a swath of North Georgia are being challenged at a higher rate than is usual. If I had to guess, I’d opine that it may be to greater Tea Party influence, and a harder-edged style of conservatism in North Georgia. As far as the two Metro Atlanta incumbents who have challengers, one of them, Fran Millar, probably has more MARTA stations in his district than any other GOP Senators, while Brandon Beach wants more MARTA stations in his area.

The General Assembly may very well see the return of Vernon Jones, former State House member and former CEO of DeKalb County, who qualified for the House District 91 seat being vacated by Dee Dawkins-Haigler, who is running for Senate against Republican JaNice VanNess. From Mark Niesse at the AJC,

Jones, a Democrat, filed papers to campaign for House District 91 on Wednesday. No other candidates have entered the race, and qualifying for office lasts until Friday.

I’m just going to throw this out there: I’ve heard a rumor that DeKalb County Commissioner Stan Watson (D) is eyeing a run for Tax Commissioner, which just happens to pay in the $300k/year range.

And then, there’s this: 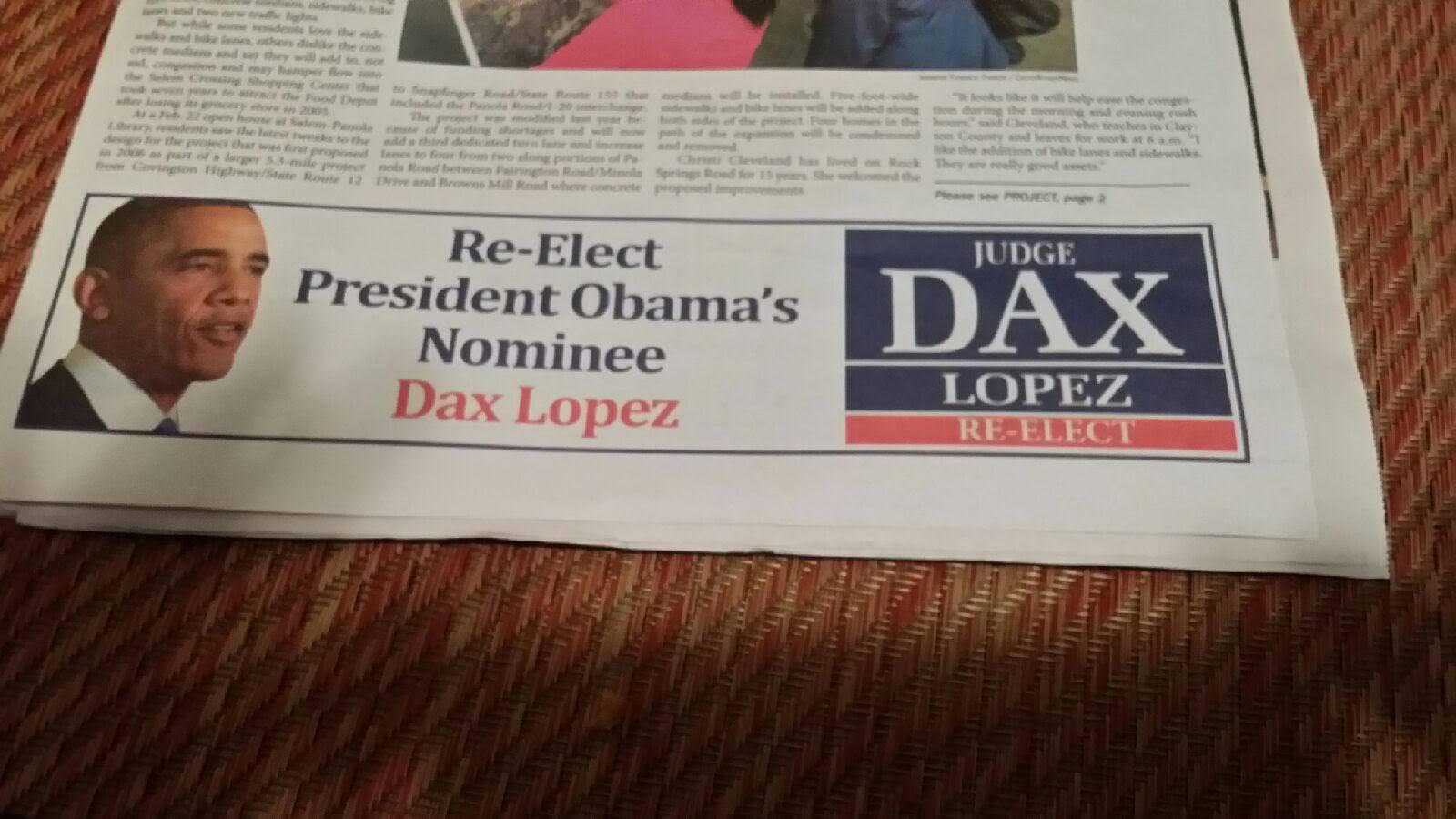 I don’t have any idea whether that was run in Democratic areas to help re-elect Judge Lopez, or in Republican areas to hurt him.