Alexander Stephens, who was born in Crawfordville, Taliaferro County, Georgia, was inaugurated as Vice President of the Confederate States of America on February 18, 1861. Stephens graduated from Franklin College, later known as the University of Georgia, and served in the Georgia legislature. Stephens opposed Georgia’s secession. One year later, Georgia’s delegation to the Confederate Congress, numbering ten members, was sworn in.

Ina Dillard was born on February 18, 1868 in Oglethorpe County Georgia. She married Richard Russell, who served on the Georgia Court of Appeals and as Chief Justice of the Georgia Supreme Court. Their son, Richard B. Russell, Jr., would be elected to the Georgia House of Representatives, where he served as Speaker and became the youngest Governor of Georgia in the 20th Century. In 1932 he ran for United States Senate and was elected.

In 1936, Russell was elected to his first full term in the Senate over former Governor Eugene Talmadge. In 1952, Russell ran for the Democratic nomination for President and he was an early mentor for Lyndon B. Johnson, who later served as President. Russell served on the Warren Commission that investigated the assassination of President Kennedy.

Russell served as Chairman of the Senate Armed Services Committee for many years. Russell was an acknowledged leader within the Senate, and especially among Southern members, and he led much of the opposition to civil rights legislation and the Civil Rights Act of 1964.

HB 826 Medical practice; physicians; provide for certain requirements for advertisement or publication of representations of board certification
(Substitute)(H&HS-Price-48th)

HB 879 Elementary and secondary education; seal of biliteracy for high school graduates with a high level of proficiency in one or more foreign languages in addition to English; provide (ED&T-Taylor-79th)

The State House Committee on Interstate Cooperation recommended that the full House “do pass” House Bill 929, to enact the “Agreement Among the States to Elect the President by National Popular Vote.”

House Bill 929 essentially says Georgia’s current “winner-take-all” system that awards all the state’s Electoral College electors to the winning presidential candidate in the state is unfair because it discounts the national tally.

“The concept of this is simple,” said the bill’s sponsor, state Rep. Earl Ehrhart, R-Powder Springs. “It guarantees the presidency to the candidate who gets the most popular vote.”

At least 10 states have so far adopted the measure, including Maryland, Hawaii and New York, but none in the South. According to the legislation, the compact goes into effect only when enough states have signed on to guarantee a majority 270 electoral votes can be reached to elect the president.

The bill was not included on the posted agenda for Tuesday’s meeting, which Rep. Scott Holcomb, D-Atlanta, questioned.

Rep. Alan Powell responded sharply that, as chairman, he can add bills at his discretion and without notice.

“Anybody who didn’t know this bill was going to come up, it’s because they’ve been living in a cave,” Powell said.

The only opposition expressed came from the University System of Georgia, that said the system supports the current law.

The co-sponsor, Rep. Rick Jasperse, R-Jasper, said he was only given a heads up shortly before the meeting. He said after the meeting that he sees that as a normal part of the legislative committee process.

I don’t envision monitoring who has weapons,” responded Rep. Mandi Ballinger, R-Canton, who is a co-sponsor.

Powell said that was the “same stale argument that’s always made.”

House Bill 561 designating the adoptable dog as the Official State Dog of Georgia has been assigned to the Senate Government Oversight Committee, whose members follow:

Nancy Jester announced she will run for reelection to District 1 on the DeKalb County Board of Commissioners and hold a series of campaign events in DeKalb.

After Saturday’s South Carolina Primary and Nevada Democratic Caucuses, with Nevada Republicans caucusing on Tuesday, the Presidential race turns into the SEC Primary, and Georgia is the second-largest number of delegates up for grabs on Tuesday, March 1, 2016.

Donald Trump will be at the World Congress Center on Sunday, February 21, 2016 at 4 PM. Click here to get your free tickets.

Ted Cruz will spend the days leading up to the Nevada Caucus in the Silver State. Remember, under RNC Rules, a candidate must win a majority of at least eight states or territories to be nominated. While some think the rule may change, it’ll be interesting to see who joins Cruz in Nevada, and how those chips fall. 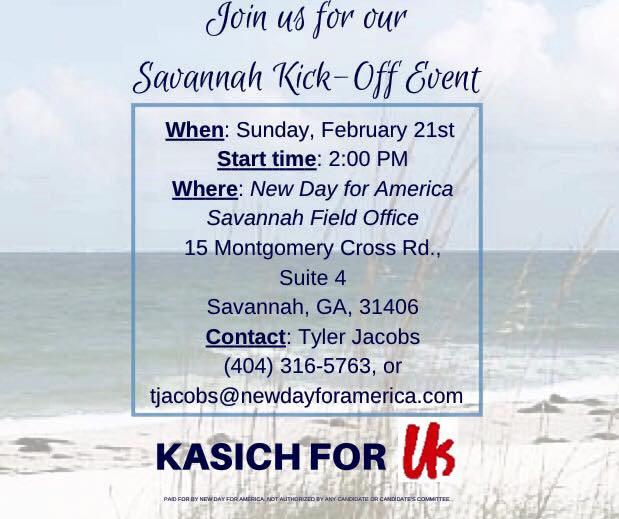 The pro-Kasich group is also opening an Augusta area headquarters: 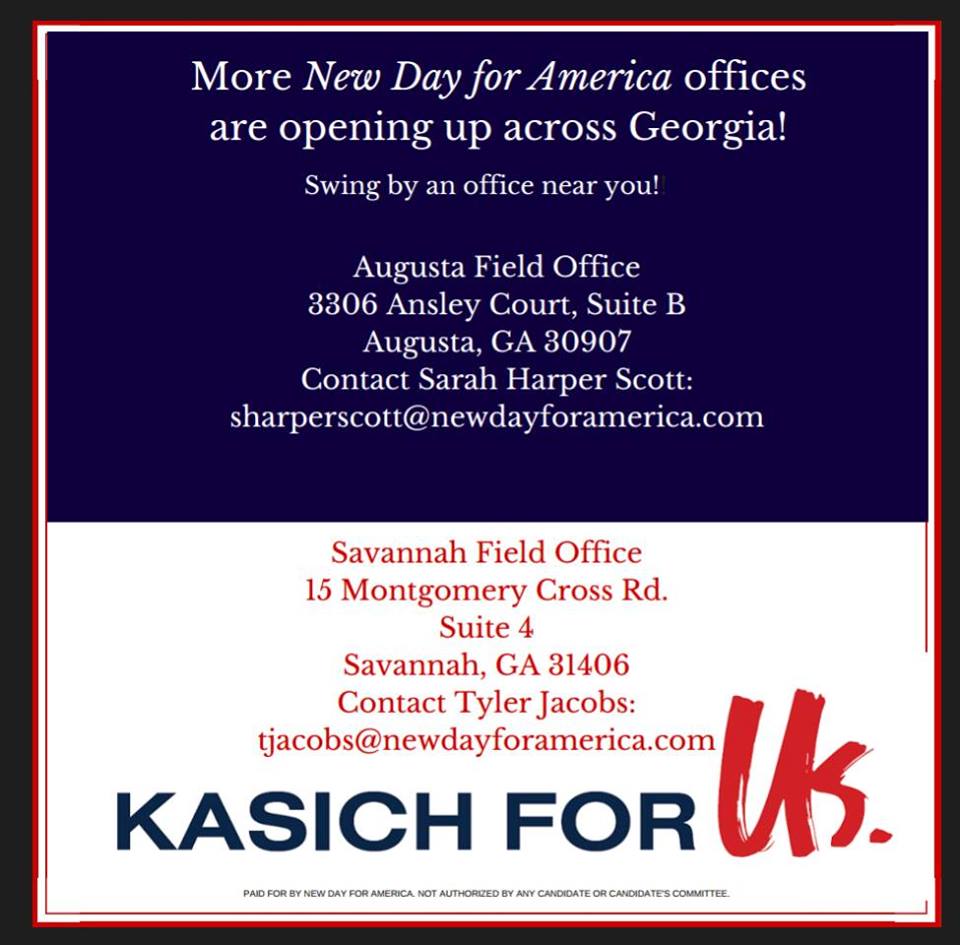 On Tuesday, March 12, 2016, Kasich will address the Georgia State House of Representatives under an open invitation from Speaker David Ralston to any Presidential candidates.

“Ted Cruz is a trusted, consistent conservative,” Kingston said. “He’s led the charge on many of the critical battles for conservative values in Washington over the past few years and has defended those same values before the Supreme Court. I saw Ted fight in the Senate to kill amnesty, repeal Obamacare, protect the Second Amendment, advance religious liberties, make America safe, and stand up for our Constitution. Ted has the record and the conviction to right the course that the liberal agenda has set our country on. I’m proud to endorse Ted Cruz because I know he will fight as President for the same conservative values he’s fought for his entire life.”

“I am deeply grateful for Jack’s support,” said Cruz. “He has been an unwavering voice for conservative principles and a tireless fighter for limited, Constitutional government.  Unlike others, Jack never bowed to the pressure of Washington to go along to get along and always put the American people first.  His support is critical for our campaign in Georgia and will make us very competitive in an important March 1st primary state.  I look forward to working with him to coalesce conservatives throughout the Peach State.”

I’ve seen emails from two campaigns to their supporters asking them to show up at Georgia Republican Party County Mass Meetings this Saturday.

First, from the Rubio campaign,

Want to help Marco in a big way ahead of the Georgia Primary on March 1st without leaving your own county? You can help by getting involved in your County Republican Party at the ground level this coming Saturday, February 20th.

It is essential for us to have a good turnout of supporters for Marco Rubio in these meetings this Saturday. If you are interested in attending these meetings in your county, please check with your County Republican Party to get more details including locations. Many local newspapers will also have notices with locations for your Precinct Mass Meetings. If you still need help finding your location, please contact us.

Again, these Precinct Mass Meetings this Saturday are only for counties with a population of over 80,000.

And earlier in the week, from the Cruz campaign,

I’m respectfully asking you to join me in signing up as a county delegate for Ted at your county Precinct Caucuses at 9am this Saturday, February 20th.‬ Georgians have the opportunity to decide who the next President of the United States will be, and we need to make sure that Ted Cruz is the Republican nominee.

1) Check your precinct locations below.

2) Arrive no later 9:45. The meeting opens promptly at 10am and anyone not inside by then will no be able to participate.

Together, we can reignite the promise of America.

I’m scoring this one +1 for the Rubio campaign for showing some awareness and trying to activate their voters. I’m scoring it +3 for the Cruz campaign. Cruz gets bonus points for (a) complete information on the over 80k counties and where to go to participate, and (b) the pledge form, which will further allow them to target their efforts, turn out their votes, and engage volunteers.