On February 17, 1739, Thomas Jones wrote to the Georgia Trustees in London of the appalling conditions in Savannah.

“The profanation of the Lord’s Day. When at church in the time of divine service, can hear continual firing of guns by people that are shooting at some game, others carrying burdens on wheelbarrows by the church door.

“The uncommon lewdness practiced by many and gloried in.

“The negligence of officers in permitting several in this town to retail rum and strong liquors, unlicensed, who have no other visible way of livelihood, where servants resort and are encouraged to rob their masters… .

“I need not mention profane swearing and drunkenness, which are not so common here as in some other places, and few are notorious therein, besides Mr. Baliff Parker, who I have seen wallow in the mire….

Kind of reminds me of the itinerary the first time I ever visited Savannah.

The Georgia legislature, on February 17, 1783, passed legislation granting land to veterans of Georgia militia who served during the Revolutionary War.

On February 17, 1784, the Georgia legislature passed a bill to increase an earlier formula for settling the state, allotting 200 acres to each head of a family, plus 50 acres for each family member (including up to 10 slaves) up to a maximum of 1000 acres.

Thomas Jefferson was elected Third President of the United States on February 17, 1801. The election was deadlocked for three months between Jefferson and his running-mate Aaron Burr.

On November 4 [1800], the national election was held. When the electoral votes were counted, the Democratic-Federalists emerged with a decisive victory, with Jefferson and Burr each earning 73 votes to Adams’ 65 votes and Pinckney’s 64 votes. John Jay, the governor of New York, received 1 vote.

Because Jefferson and Burr had tied, the election went to the House of Representatives, which began voting on the issue on February 11, 1801. What at first seemed but an electoral technicality–handing Jefferson victory over his running mate–developed into a major constitutional crisis when Federalists in the lame-duck Congress threw their support behind Burr. Jefferson needed a majority of nine states to win, but in the first ballot had only eight states, with Burr winning six states and Maryland and Virginia. Finally, on February 17, a small group of Federalists reasoned that the peaceful transfer of power required that the majority party have its choice as president and voted in Jefferson’s favor. The 35th ballot gave Jefferson victory with 10 votes. Burr received four votes and two states voted blank.

On February 17, 1820, the United States Senate passed the Missouri Compromise to govern the admission of new states as either slave-holding or not.

On February 17, 1854, Georgia Governor Herschel Johnson signed legislation by the Georgia General Assembly placing on the ballot for the next generation the question of whether to move the state capital from Milledgeville to Atlanta.

The first portrait of Dr. Martin Luther King, Jr. to hang in the state capitol was unveiled on March 17, 1974 and was replaced in 2006 by the current portrait.

Congratulations to Ms. Park Cannon (D), who was elected the newest member of the Georgia State House, representing District 58. The Special Runoff Election held yesterday drew 1,132 voters, of whom 59% voted for Cannon.

A group of citizens supporting in-state cultivation of marijuana to produce medicinal CBD oil delivered 12,000 signatures of supporters to the Governor’s Office.

“Three months ago we started a petition online, and as of last night we have over 12,000 signatures,” said Sebastien Cotte, one of dozens of medical marijuana patients, their parents or their caregivers who gathered at the Capitol to deliver the printout.

Cotte’s son Jagger Cotte, 5, has a mitochondrial disease and takes a medical marijuana product to reduce pain and seizures.

The father said that access is “simply a human rights issue.”

House Bill 722 [by State Rep. Allen Peake] would license up to six companies to grow specially bred marijuana in Georgia and manufacture and distribute liquid marijuana products to patients who have any one of 17 diagnoses — and a doctor’s recommendation.

The bill needs to pass the House by Feb. 29 for a real chance of becoming law this year. It has yet to be scheduled for a vote by the House Judiciary Non-Civil Committee. 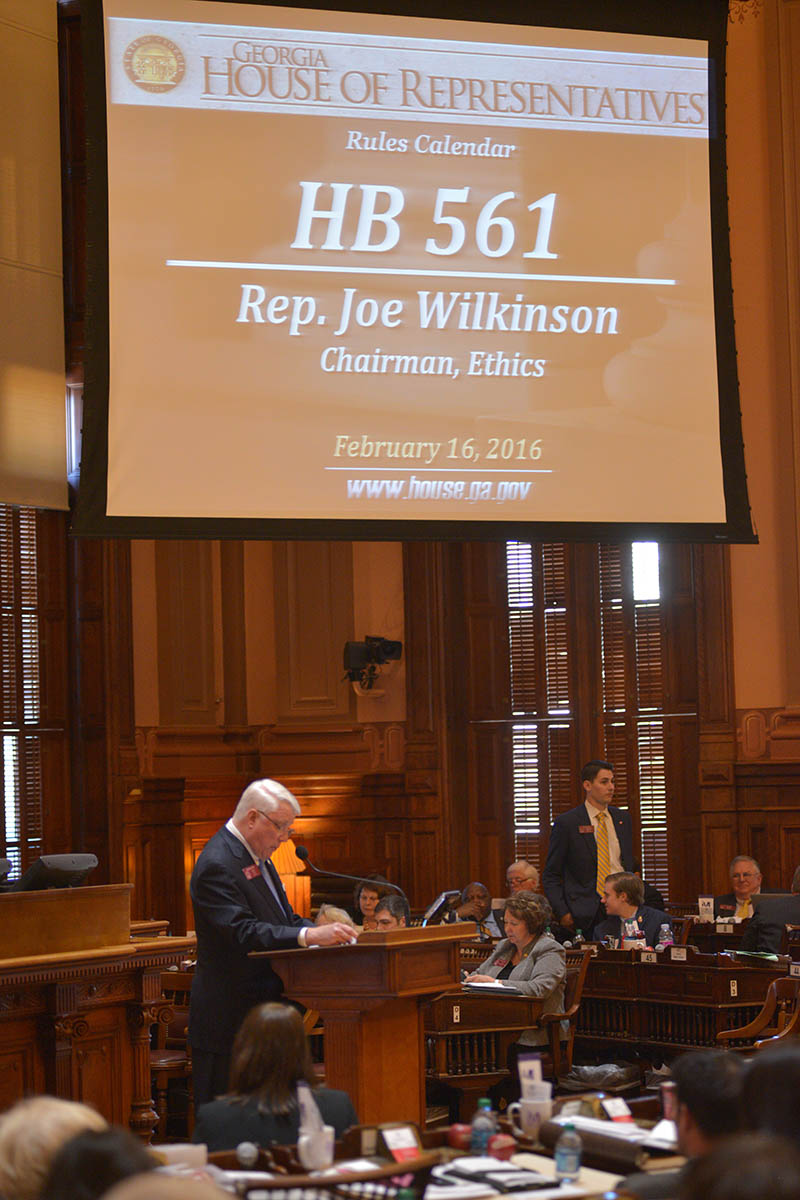 The House also passed unanimously (172-0) HB 561 by Rep. Joe Wilkinson (R-Sandy Springs) to designate “any adoptable dog” as the Official State Dog of Georgia. From WABE,

The bill, introduced in 2015 by Rep. Joe Wilkinson, R-Atlanta, notes that “thousands of dogs and cats are currently available for adoption in Georgia animal shelters, humane societies and private rescue groups” and that “the National Council on Pet Population Study and Policy estimates that a majority of animals taken into shelters are euthanized.”

“Georgia was founded as a colony to give people a second chance at life,” Wilkinson said. “That’s exactly what we’re trying to do with these adoptable animals. Give them a second chance.”

He said the bill’s purpose is to “see if we can’t save more animals … and see if we can’t also enrich the lives of Georgians because animals can have such a positive, loving influence on families.”

“The bill gives shelter animals the time and attention they so deserve.  We are committed to finding homes for all adoptable animals.  We strive to be a part of the solution to ending pet homelessness and that is exactly what this bill aims to do.  [Rep.] Wilkinson is giving potential adopters yet another reason to give shelter and rescue animals a chance.  That is absolutely legislation we stand behind.” 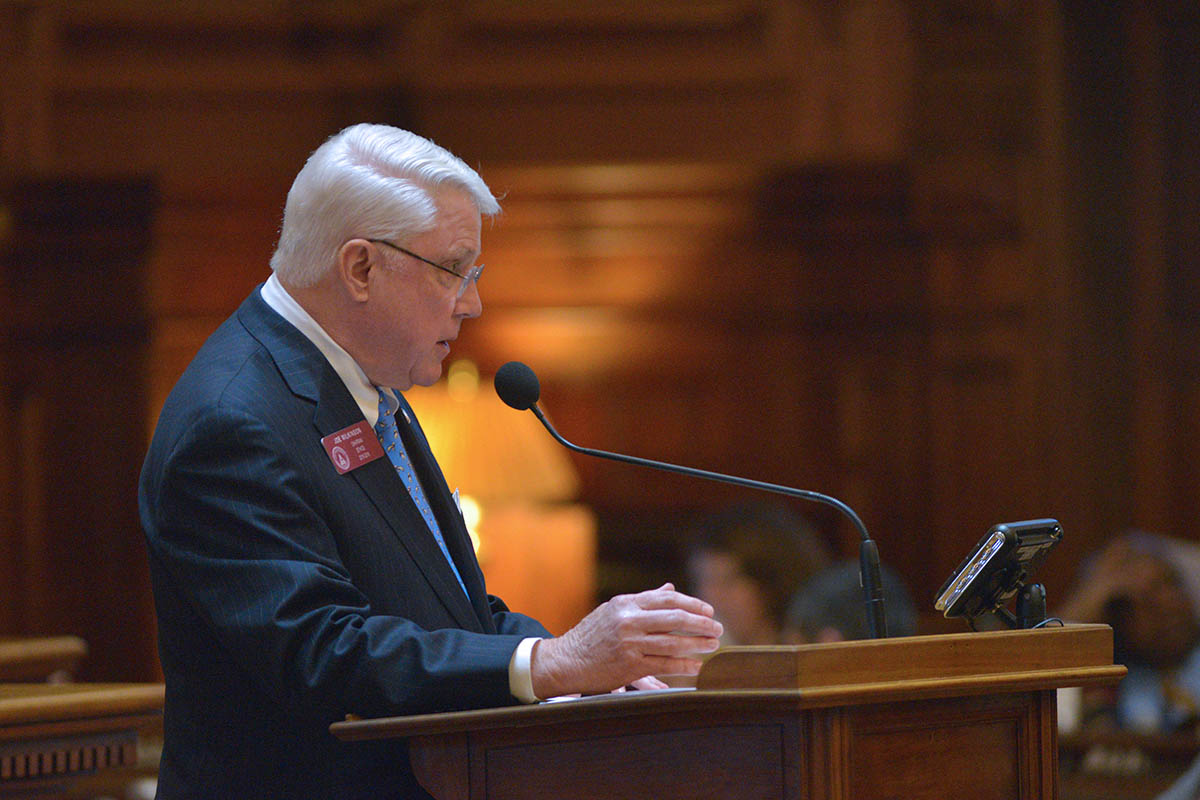 Democratic political journeyman Mike Thurmond will run for DEO of DeKalb County in this year’s Democratic Primary, according to the Atlanta Business Chronicle.

“After much deliberation and prayer with my family, friends and a broad cross-section of DeKalb County residents, I have decided to offer myself again to serve the citizens of DeKalb,” Thurmond said in a prepared statement. “We need to restore confidence in DeKalb County government, and I trust my candidacy will be a step forward in uniting and strengthening our county.”

Interim DeKalb CEO Lee May announced this month that he won’t be running for the position permanently this year.

After heading the Georgia Division of Family and Children Services during the 1990s, Thurmond was elected labor commissioner in 1998 and served three four-year terms. He left state government in 2010 in an unsuccessful bid for the U.S. Senate.

Thurmond was appointed DeKalb school superintendent in 2013 in the midst of a leadership crisis that resulted in the system being put on probation by a leading accreditation agency.

If Senator Fran Millar (R-Dunwoody) has his way, a prospective Thurmond term as CEO would be cut short under Senate Bill 378, which will restructure DeKalb County’s governing authority by:

Meanwhile, Commissioner Sharon Barnes Sutton, accused of accepting YMCA memberships for her family worth more than $21,000 appears to be ducking media questions about the gift.

Commissioner Sharon Barnes Sutton is accused of secretly accepting free YMCA memberships for her family and staff members for the past five years.

Fellow commissioner Nancy Jester said the deal was worth more than $25,000 dollars which is why she plans to introduce a gift ban ordinance.  She believes accepting a gift that large as an elected official should be considered criminal.

“My thought is that I would hope everyone would understand that that is a bad idea, that’s inappropriate behavior, but for those that refuse to regulate themselves, then it’s time to regulate them,” Jester said.

In an attempt to gather both sides of the story, CBS46 tried to track down Barnes Sutton, but she was a no show at the committee of the whole meeting earlier in the day.  So we called the Commissioner’s office and a staff member told us she wasn’t there.

But we were able to find her at a public works committee meeting.  Barnes Sutton initially agreed to do an interview and as we were setting up for our one-on-one, she sneaked out of the meeting and told a county staff member to tell us that she wouldn’t speak with us after all.

CBS46 tried contacting her attorney Dwight Thomas for comment, but he was unavailable as well.

“He has the views of a young person, in a 70-year-old’s body! How can you not support that?” said Dante Ramirez, a high school student from DeKalb County.

Ramirez joined a group of Morehouse students in northeast Atlanta at a rally to prepare for tonight’s event.

“Like, he walked with Martin Luther King. What other candidate can say that,” said Ramirez.

The Atlanta Democrat made his decision public just hours before Sanders arrived at a Morehouse College rally aimed at enticing black voters to give his campaign a second look. He had endorsed Clinton, a former secretary of state, weeks ago.

“After months of looking at Bernie’s record, studying his positions on healthcare, Wall Street, predatory lending and the minimum wage, I came to the conclusion that Bernie’s position on the issues that affect my constituents in Georgia the most conform most closely to my positions,” said Fort.

Fort said Sanders’ call for income equality and his attacks on a Washington establishment that favors the rich over the poor will resonate in the region as more voters tune in.

While Senator Fort is not quite the national figure that Congressman John Lewis is, this must feel horrifyingly familiar to the Clintons, as they recall the exodus of Democratic Super Delegates from Clinton to Obama that Lewis kicked off in February 2008.