On February 16, 1923, Howard Carter and his archaeology party entered the burial chamber of King Tutankhamen.

The steps led to an ancient sealed doorway bearing the name Tutankhamen. When Carter and Lord Carnarvon entered the tomb’s interior chambers on November 26, they were thrilled to find it virtually intact, with its treasures untouched after more than 3,000 years. The men began exploring the four rooms of the tomb, and on February 16, 1923, under the watchful eyes of a number of important officials, Carter opened the door to the last chamber.

Inside lay a sarcophagus with three coffins nested inside one another. The last coffin, made of solid gold, contained the mummified body of King Tut. Among the riches found in the tomb–golden shrines, jewelry, statues, a chariot, weapons, clothing–the perfectly preserved mummy was the most valuable, as it was the first one ever to be discovered. Despite rumors that a curse would befall anyone who disturbed the tomb, its treasures were carefully catalogued, removed and included in a famous traveling exhibition called the “Treasures of Tutankhamen.”

Fidel Castro was sworn-in as Prime Minister of Cuba on February 16, 1959.

On February 16, 1968, Speaker of the Alabama House of Representative Rankin Fite placed the first 911 call from Haleyville City Hall to Congressman Tom Bevill at the Haleyville police station.

HB 885 Health; certain counties to create a county board of health and wellness; repeal statute (GAff-Jones-47th)

A press conference will be held today at 2:30 in the State Capitol by supporters of Allen Peake’s legislation to allow in-state cultivation of marijuana for processing into CBD oil.

The press conference will be in the South Wing inside the Capitol Building.

PLEASE: Dress business, and NO CANNABIS LEAF signs, shirts, flyers, etc. Pictures like this do not help the cause. Also, prepare to be interviewed in order to give clear and accurate information for HB722.

Meanwhile, it looks like somebody has the cultivation thing down pat, even if they’re doing it without state sanction. From WALB in Albany,

One of the largest marijuana busts in recent memory was made near the small town of Ambrose, in Coffee County.

They raided houses in the 4800 and 5000 blocks of Younge Fussel Road, near Ambrose, and found a giant stash of marijuana, bagged up and ready for sale.

During the search of both houses, approximately 325 pounds of processed marijuana and a marijuana manufacturing operation were discovered.

I award +1 to whomever headlined the story, “Joint operation lands massive marijuana haul.”

Senator John Albers (R-Roswell) posted earlier this week about a conversation he had with a constituent concerning MARTA rail expansion in North Fulton.

Constituent: Why do you oppose transit, I need a better commute and time with my family?

[Albers]: I understand and don’t oppose transit. Where did you hear that?

Constituent: I read it on a social media post from DeKalb Democrats.

[Albers]: Let me explain, I support multiple solutions to improve traffic congestion. Specifically, I know we need additional capacity on GA400 and even more important East-West connectors to improve the lives of families and businesses. Would this help?

Constituent: Certainly this would help me.

[Albers]: Did you know a heavy rail solution will cost billions of dollars, increase your taxes for the next 47 years and not likely to be operational until the 2030’s?

Constituent: Are you kidding me? My kids will be graduated from college by then? I need to be at her dance recitals now.

[Albers]: This is why I am working toward common sense solutions. If we put a question on the ballot, it should be honest and transparent to voters with solutions that make a meaningful impact in their lives.

Albers also pointed to a poll of voters in North Fulton that shows opposition to the MARTA expansion when the timeline is included,

Voters in the 5 major cities of North Fulton county have spoken and oppose a massive tax increase to support a Marta heavy rail extension.

When presented with a reasonable and accurate set of facts, the poll showed a clear landslide rebuttal.

Here is a link to the actual polling memo that was released, including the question wording.

Q1. The Georgia General Assembly is considering putting a voter referendum on the ballot to increase the sales tax
in Fulton County by half a cent. The funds would be spent on building a new MARTA rail line extension into North Fulton.

I will give you the main arguments for and against the proposal, and then ask for your opinion of it.

The proposed rail line would become operational fifteen years from now in 2031,
but the half-cent sales tax would be collected for the next 47 years.

Supporters argue that a new rail line is needed to relieve traffic and create new development.

Opponents argue that a new rail line wouldn’t even be operational for 15 years from now, yet the tax increase
would be collected for the 47 more years even though studies show that the investment would not reduce traffic.

Metro officials will make public an October poll of registered voters in DeKalb and Fulton, which shows that 73 percent — 58 percent among Republicans — favor expansion of MARTA. Pollster John McLaughlin told me that the approval holds up even when only north Fulton responses are tallied.

Seventy-one percent of those polled would favor a referendum to decide the matter, which is no surprise.

The news is in this finding: 49 percent of Fulton and DeKalb voters polled – 46 percent in Fulton – say they would vote against any penny sales tax referendum for transportation that didn’t consider funding for commuter rail.

The difference, in my opinion, is that support plummets when the fact that new rail would not be online until 2030 is introduced.

Voters go to the polls today in a Special Runoff Election for House District 58 between Ms. Park Cannon (D) and Ralph Long.

If Mike Thurmond becomes a candidate for DeKalb CEO, it sounds from Bill Torpy’s article that it will not be because he wants to, but he feels someone has to step up.

Just last year, when Thurmond was still school superintendent, I asked him about rumors he wanted to run for CEO.

Thurmond laughed heartily, saying, “That is the last thing I would do, period, paragraph, close the book.”

OK, on second thought, open the book back up.

Sitting in an office at the high-end personal injury firm where he works, Thurmond said, “Listen to me. We cannot lose DeKalb.”

Thurmond has been often viewed as a politician who can transcend racial and party lines. In his 1998 victory as labor commissioner, he became the first black candidate to win a statewide post without first being appointed to it.

Looking back on his change in strategy, he said, “I wish I could say I had a great Martin Luther King moment. But I didn’t. I wanted to win. It was self-interest, enlightened self-interest.”

Glynn County appears to be bracing itself for a full-on clown car election for Clerk of Superior Court, with primary elections in May and a General Election in November.

Cathy Browning, an administrative assistant with Glynn County Sheriff Neal Jump, says she will seek the Republican nomination in the May 24, 2016 primary.

Browning has worked for Glynn County 32 years, having been employed 10 years in State Court. She has spent the past 22 years in the sheriff’s office.

Browning is the second candidate to announce for the post following the abrupt resignation of Lola Jamsky on Sept. 15. Jamsky, whose term was due to expire at the end of 2016, named her son, Darren Jones, her chief deputy clerk at the time, as her successor.

Ron Adams, a former Glynn County Board of Education candidate, announced earlier that he will seek the Republican nomination for the clerk’s post.

Local attorney John Killgallon also appears to be in the running for the seat.

While most of the Republicans are camped out next door, some Democrats have been making forays into Georgia. Over the weekend, former President Bill Clinton stumped for his wife Hillary, in Clayton County. From WSB-TV,

The crowd filled the gymnasium to hear him promote his wife Hillary Clinton’s presidential campaign.

“The reason Hilly is running is to make sure we don’t go back in the opposite direction with a Republican President,” Clinton said.

Clinton called Hillary a “change maker” and spoke about her desire to help different families of different backgrounds.

“She always says how can I empower you to make something good happen?” Clinton said.

“So first she says we’re going to allow everybody to refinance and stop the federal government from making one red cent on these loans,” Clinton said.

We had an undercover Republican at the event. Here’s some of what he or she texted me during the event. 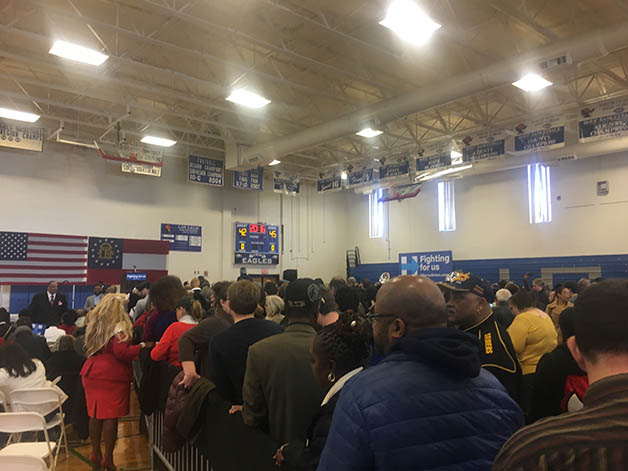 Twenty minutes after the scheduled start time, “Maybe 300 people they only used about half of the auditorium.”

About the walk-on music being used, “‘What doesn’t kill you makes you stronger’ is this an homage to all the f***ed up things they’ve gotten away with?” 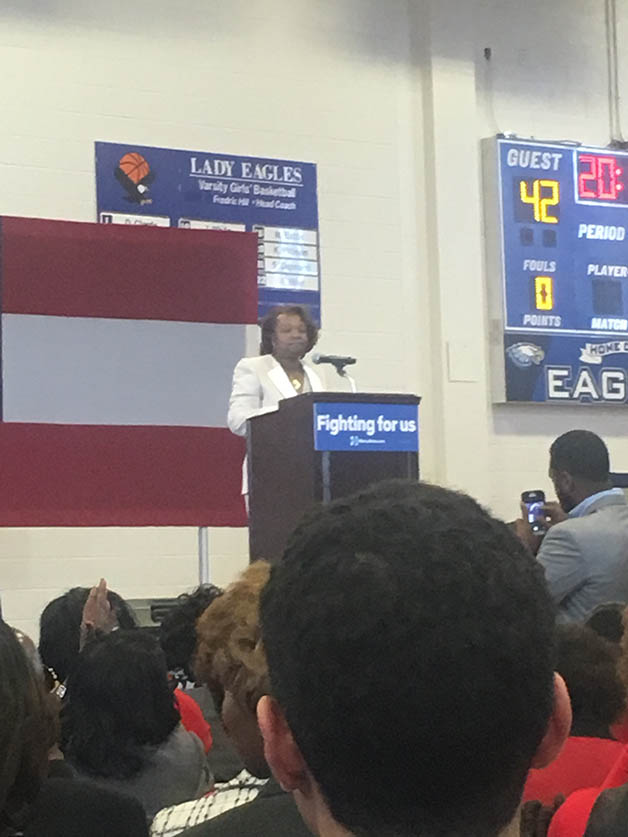 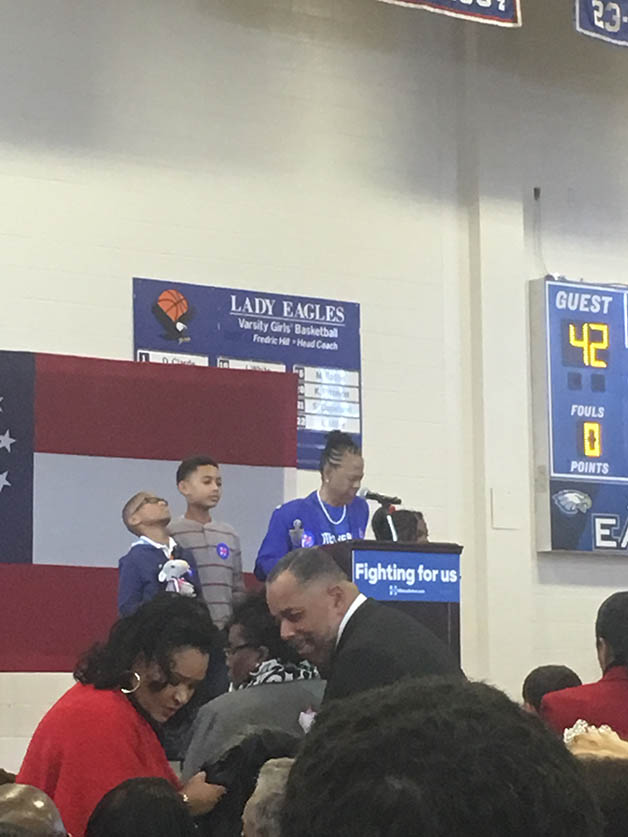 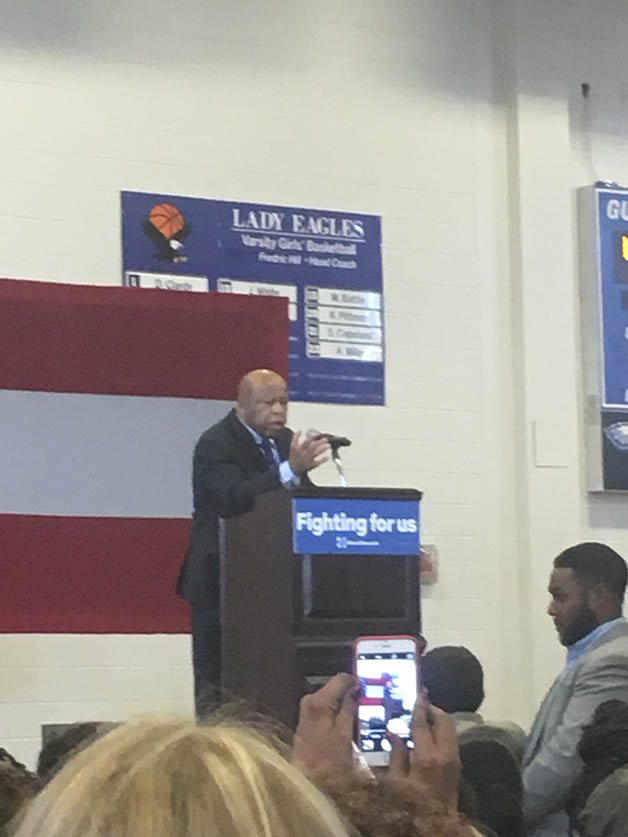 Quoting Congressman John Lewis, “the vote is the most powerful nonviolent tool the people possess.” 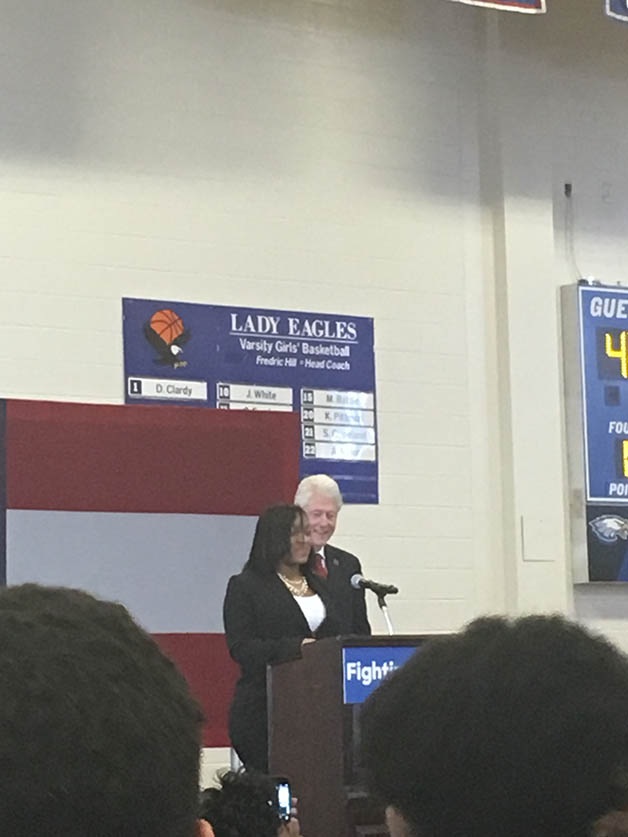 When President Clinton was introduced by a young woman, “here he is creeping on an 18-year old.” and when the former President spoke, “Pandering to young people with refinancing college debt and free college for poor and middle classes with expanded hope grant.”

Today, Vermont Senator Bernie Sanders will speak at Morehouse College on his HBCU tour. From the AJC Political Insider,

In a few hours, Vermont Sen. Bernie Sanders will make his case for the presidency at a Morehouse College arena before exactly the crowd he needs to thrive in the South: Young black voters.

Exit polls in Iowa and New Hampshire show Sanders has an overwhelming edge over Hillary Clinton with college students, but this audience could be a harder sell.

The crowd that gathers at Morehouse tonight will hear Sanders’ call for a “political revolution” that includes a promise of tuition-free higher education that enthralled crowds in Iowa and New Hampshire.