On January 23, 1861, Georgia’s members of the United States House of Representatives resigned following passage of the Secession Ordinance; her Senators had resigned earlier. The next day, the secession convention in Milledgeville elected ten delegates to a conference of Southern states in Montgomery, Alabama

On January 24, 1915, the first transcontinental telephone call was placed from Jekyll Island, Georgia

On January 25, 1915, a charter was issued in DeKalb County Superior Court to Emory University.

On January 23, 1923, Georgia ratified the Twentieth Amendment to the US Constitution, which ended Presidential terms on January 20th following an election and those of Congress to January 3d.

January 24, 1933 saw the first sales tax in Georgia proposed to fund schools and aid for farmers.

On January 25, 1943, Georgia Gov. Ellis Arnall signed legislation governor as an ex officio member of the State Board of Education, State Board of Regents, Department of Public Safety, and State Housing Authority, as part of a proposal to reduce the Governor’s power over education.

On January 23, 1973, President Richard M. Nixon announced that terms had been reached to settle the Vietnam War, a document known as the “Paris Peace Accords.”

Whatever the final figure, the march was one of the largest civil rights demonstrations since a 1965 rally that followed a march from Selma, Ala. to Montgomery. The rally, led by Dr. King, drew 25,000 people.

On January 24, 2001, the Georgia House of Representatives approved legislation changing the state flag to the Barnes design with the state seal on a blue background and a banner depicting five previous flags that flew over Georgia. 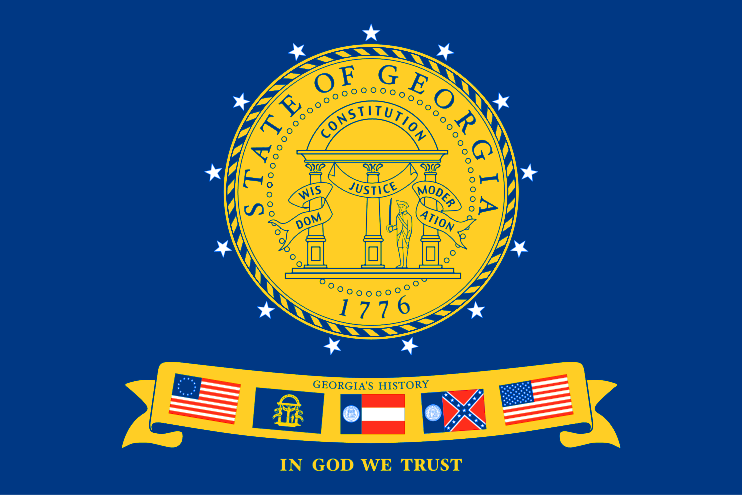 The House and Senate passed an Adjournment Resolution setting the schedule for the rest of the Session. Under that document, Day 30 “Crossover Day” will be Monday, February 29, and the last day of the Session is scheduled for March 24, 2016, two months before General Primary elections.

In an email to constituents, Hill described the Act:

This week I introduced the Tax Relief Act of 2016 Senate Bill 280 to reduce the personal income tax by 10% to a flat 5.4 percent rate. It also increases your personal exemptions per person by $2,000 and would limit some itemized deductions for itemizers. We preserve all charitable contribution deductions, medical expenses and most mortgage interest (cap $25k) deductions. Finally, SB 280 would eliminate both the marriage penalty and corporate net worth tax while maintaining the current sales tax base and rate.

A related constitutional amendment SR 756, if passed by the legislature and in a ballot referendum, would reduce the personal income tax rate further down to a 5 percent floor rate dependent upon 2 triggers –  state revenue levels and the level of Georgia’s “Rainy Day Fund” of at least 7% of the current state revenue or today just over $1.6 billion.

Georgia’s current individual income tax is the highest rate in the southeastern United States. A shift down to 5.4 %  would bring Georgia’s tax rate below North Carolina and South Carolina. The lower rate will improve Georgia’s visibility  among the most competitive states for business.

The Tax Relief Act of 2016, if passed, will also simplify administrative measures and reporting for small businesses that currently make up approximately 60 percent of Georgia’s businesses, to eliminate the corporate net worth tax.

And via the Senate Press Office:

“We need to do all we can to reduce the tax burden on Georgia’s hardworking families, and my Tax Relief Act does just that,” said Sen. Hill. “Revising our current tax law would allow Georgians to keep more dollars in their pockets and make their own decisions on whether those dollars should be saved, invested or spent.”

The Tax Relief Act of 2016 will also simplify administrative measures and reporting for small businesses that currently make up approximately 60 percent of Georgia’s businesses, to eliminate the corporate net worth tax.

Hill spoke to WABE about his legislation.

Hill said any revenue loss from the cut would already be made up  from the state’s strong revenue growth. In the fiscal year 2017 budget, the the state estimates it will collect about $800,000 more than the amended fiscal 2016 budget – not counting new transportation money from what lawmakers approved last year.

“I’ve always thought that the state often has a spending problem, not a revenue problem. But all we’re doing is reducing the increase,” Hill said.

Sen. Hill would need help from the House on his personal income tax reduction proposal. Any bills dealing with revenue have to originate in the House.

“I don’t touch the sales tax rate at all,” Hill said. He said he’s been in touch with members in the other chamber about a possible House version of the bill.

Elsewhere, legislators from outside Metro Atlanta complain that too much transportation funding is being spent in the Capital region.

The governor, House speaker, lieutenant governor and chairmen of the House and Senate transportation committees stood before the media the first week of the legislative session to ballyhoo the coming results of a tax package enacted in 2015. The boost in gasoline taxes and new fees on electric cars and hotel stays is politically risky for Republicans, and the leaders were providing the political cover they had promised last year when soliciting passage.

The most expensive projects that the website highlights, which are along Interstate Highways, total $14.06 billion. Of that, $11.75 billion is for metro Atlanta, or 84 percent.

“Obviously we are hoping there’s equity in the funding and making sure that rural Georgia gets its fair shake and fair share of transportation dollars to invest in our infrastructure in South Georgia ,” said Sen. Tyler Harper, R-Ocilla.

“I think that 85 percent of that money is going to go to within 60 miles of downtown Atlanta. That is a great need, but it’s not 80 percent of our needs,” said Sen. Lester Jackson, D-Savannah.

Georgia’s Republican National Committeeman Randy Evans announced he will be running for reelection, announcing at the Republican Leadership for Georgia dinner and via email to District Chairs.

I have appreciated the opportunity to serve and I believe that I have made a real difference in revamping our nomination process, bringing order to our debates, and taking steps to make sure every candidate has a chance to win.  Many folks from the RNC Chairman to Precinct Chairs and all manner of folks in between have encouraged me to seek reelection.  I hope to talk to you soon, but I wanted you to hear this from me first.

“Ginger Howard embodies a notable passion for the Republican Party,” says Sue Everhart, former chairwoman of the Georgia Republican Party. “I remember driving down Peachtree Road in the pouring rain on Election Day in November 2012 and seeing Ginger on the sidewalk waving Republican signage, absolutely drenched but fiercely dedicated. It’s that dedication and drive that leads me to believe that Ginger will serve us with the utmost commitment to the RNC.”

Former State Rep. Jeff Brown (R-LaGrange) announced yesterday that he will not run for the Third Congressional District seat being vacated by Rep. Lynn Westmoreland.

Nash confirmed her plans to the Daily Post during a meeting with the newspaper on Thursday. The longtime county employee came out of retirement in 2011 to win the position in a special election, and she was elected to her first full term in 2012 as a Republican.

“I do plan to run for re-election (and) I will be making a formal announcement closer to qualifying time,” Nash said. “I’m having too much fun with these folks to throw in the towel quite yet.”

Qualifying for local offices is a little over a month away, just after the March 1 Presidential primary. Candidates will file their official candidacy paperwork with their respective political parties during the week of March 7. Partisan primaries for local and state offices will be held on May 24, and the general election will be held Nov. 8.

Congressman Doug Collins has at least three announced opponents in the Republican Primary.

Three members of the Tea Party Patriots announced Thursday night they will try to oust Republican Doug Collins of Gainesville from his congressional seat.

Roger Fitzpatrick, Bernie Fontaine and Mike Scupin all spoke to the group of about 80 people, each one expressing dissatisfaction with Collins’ voting record.

“I believe there will be at least a 50 percent turnout,” said Sheila Nicholas, chair of Hall County Democrats. “I really hope so. There’s so much interest in it, both on the Democratic and Republican sides. I think more people will come out this year, because they’re so dissatisfied with what’s going on with our government.”

Debra Pilgrim, chair of the Hall County Republican party, said the election this year carries greater weight in the South, as more presidential candidates have visited than in prior election years.

“This could be historical for us,” she said. “It will change the landscape of what we see in future elections.”

Both parties are working locally to encourage voter participation and enthusiasm.

The Hall County GOP has to educate, inform and “really stress the importance of each individual vote,” Pilgrim said. “We work very hard to do that.”

Nicholas said her party has been holding voter registration drives for months and going door-to-door, particularly where there has been low voter turnout.

Voter turnout for Democrats in Hall County is crucial, she said, because it reflects back to the Democratic National Committee that there’s a strong presence in Hall County. That could mean more field organizers and money sent here.

To constitutionalists across the State of Georgia: if you’re interested in challenging Ted Cruz’ eligibility for the presidency, contact me. My law firm litigated the Georgia eligibility case against Obama (in which Obama and his lawyer ignored a subpoena and refused to show up for trial) that went to the U.S. Supreme Court. While the Supreme Court refused to grant certiorari in the cases involving Obama, there is a substantial possibility that a case against Cruz may make the cut. While Obama’s birthplace was the subject of speculation and dispute, Cruz was unquestionably born in Canada — and only recently renounced his Canadian citizenship. Pass the word on to the Trump camp!

Meanwhile, in Carroll County, a locally-sourced electronic billboard is lighting up the sky for Ted Cruz. 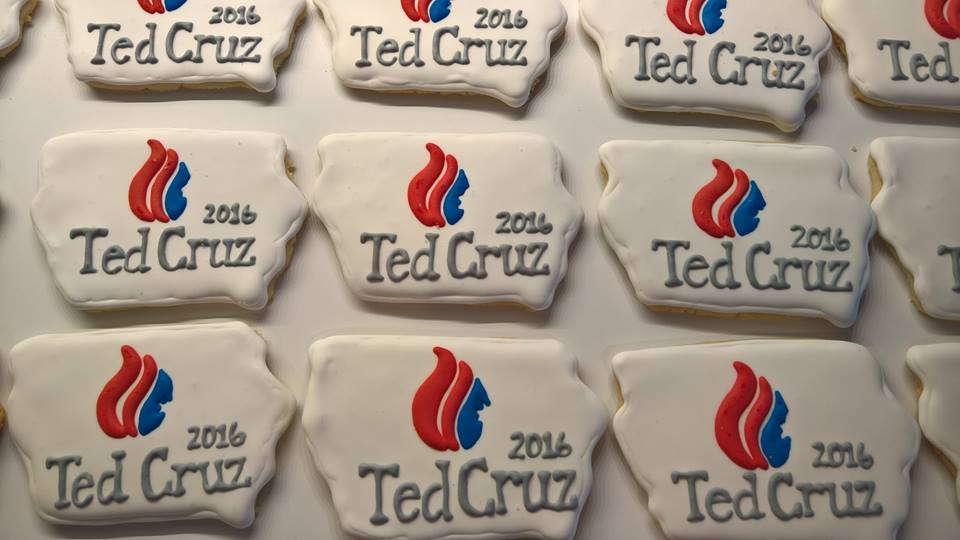 As a programming note, yes, there is a lot of Cruz stuff here, most of it good, but some of it negative. That’s a function of what I’m seeing. If you’re on a Presidential campaign, and you’re doing stuff in your community to get your candidate’s votes out, or if you’re going to Iowa, New Hampshire, South Carolina, or elsewhere, we’d be happy to feature your work, we just need you to let us know. Preferably with photos.