On January 1, 1751, the law prohibiting slavery in Georgia was repealed after an act passed by the Georgia Trustees the previous year.

On January 2, 1766, some Sons of Liberty marched on the Royal Governor’s Mansion in Savannah to “discuss” the Stamp Act, which required the use of stamped paper for all printing as a means of taxing the colonies. They were met by a pistol-toting Governor Wright. The next day, January 3, 1766, the Royal Stamp Master arrived at Tybee Island and was taken to the Governor’s Mansion. On that day, Georgia became the first and only colony in which the stamp tax was actually collected.

Georgia became the fourth state to ratify the United States Constitution on January 2, 1788.

Timothy Pickering of Massachusetts became the first United States Senator to be censured by the body on January 2, 1811.

Delaware, technically at the time a slave state, rejected a proposal to secede from the United States on January 3, 1861.

The Emancipation Proclamation by President Abraham Lincoln went into effect in eleven Southern states on January 1, 1863, though parts of Virginia and Louisiana were exempt.

On January 3, 1973, Andrew Young was sworn in as the first African-American Congressman from Georgia since 1871.

Georgia Congressman Newt Gingrich was elected Speaker of the House on January 4, 1995, the third Georgian to wield the gavel. This marked the first time in more than forty years that Republicans controlled the House of Representatives.

On January 4, 1999, in DeKalb County, State Court Judge Al Wong became the first Asian-American judge in Georgia and the Southeast.

We’re now less than sixty days from the 2016 Presidential Preference Primary here in Georgia, and two candidates have dropped out of the Republican race since Secretary of State Brian Kemp announced the lists of qualified candidates.

The first election of 2016 will be held later this month on January 19, 2016, as three Democrats vie for the State House District 58 seat in a Special Election. 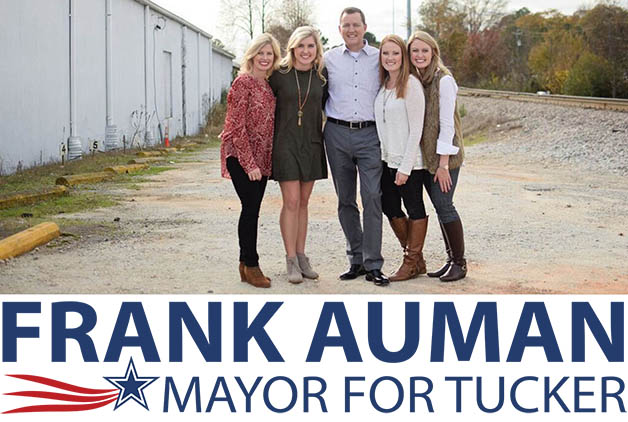 Frank Auman has a website for his campaign for Mayor of the new city of Tucker, and a Facebook page.

State Rep. Brett Harrell, (R-Snellville) announced this morning that he will run for reelection to the State House.

The Primary Election will be held on May 24th, 2016. Harrell also announced that he has raised over $100,000 for his re-election campaign.

“It has truly been a pleasure representing the people of District 106 at the state Capitol, and I am grateful for the opportunity they have given me to do so. I am proud of my record of putting taxpayers first, supporting balanced budgets, passing meaningful transportation reform, and championing efforts to curb the tide of illegal immigration.”

The Columbus Ledger-Enquirer takes a brief look at local elections in 2016.

Columbus will hold local elections during state party primaries on May 24, when a lot of local offices will be up for grabs.

Among them will be the nonpartisan, odd-numbered school board posts (except for the citywide Post 9 seat held by Kia Chambers) and the even-numbered Columbus Council districts.

The county school board representatives who could be challenged this year are Chairman Rob Varner of District 5; vice-chairwoman Pat Hugley Green of District 1; Athavia “A.J.” Senior of District 3; and Shannon Smallman in District 7.

The city councilors who could face contenders are citywide representative Skip Henderson in Post 10; District 2 Councilor Glenn Davis; District 4′s Evelyn Turner-Pugh; and District 6′s Gary Allen. Also on the ballot is the District 8 seat, where former Georgia House Rep. Tom Buck is filling the term of the late Councilor C.E. “Red” McDaniel. Buck does not plan to run.

Columbus Mayor Teresa Tomlinson also hopes to have a “Thaw the Freeze” referendum on the November ballot, to alter the city’s freeze on tax assessments for owner-occupied homes.

If a runoff is necessary, it will be July 26.

Also looking ahead to local elections is the Gainesville Times,

Richard Mecum, the current [Hall County Commission] chairman, has said he has no desire to seek re-election.

And Commissioner Billy Powell has said he will not seek the chairman’s seat, but will instead seek re-election to District 2.

Commissioner Jeff Stowe has not yet announced his intentions.

Meanwhile, Steve Gailey, a former District 3 commissioner, has announced his candidacy for the chairman’s seat.

So, too, has Richard Higgins, who served 11 years as chairman of the Hall County Board of Education.

Gwinnett County Commissioners are expected to vote on the 2016 County Budget, totalling over $1.5 billion dollars.

New Mayors will take office today in Powder Springs and Kennesaw, according to the Marietta Daily Journal.

New leadership comes with the new year for the cities of Powder Springs and Kennesaw as mayors-elect Al Thurman and Derek Easterling will be sworn into their respective cities tonight.

Thurman, a 58-year-old former councilman and landscaping business owner, will be sworn in as Powder Springs’ first black mayor.

Meanwhile, former sheriff’s deputy and retired Navy Lt. Easterling, 55, will be sworn in as Kennesaw’s new mayor after Mark Mathews, mayor of eight years, chose not to run for re-election.

At 10:30 AM today, John Ernst will be sworn in as the third Mayor of Brookhaven (second elected). Also at that time, Linley Jones will be sworn into her first full term after being appointed to City Council last year, and Bates Mattison re-ups his service.

Patrol cars from the Lumpkin County Sheriff’s Office will now bear the national motto, “In God We Trust.”

The Georgia Public Service Commission (Commission) unanimously approved a decrease in the Fuel Cost Recovery (FCR) rate for Georgia Power Company customers this month. The rate reduction will save the average residential customer using 1,000 kilowatt hours about five dollars a month for a total reduction of 14 percent on their monthly bill. The Commission approved an agreement between the Company and the Commission Public Advocacy Interest Staff that increased the reduction from the company’s original filing in Sept. The company’s filing indicates the falling price of natural gas is a key reason for the decrease.

“We are pleased we can lower Georgia Power customers’ rates and give consumers a price break, especially at this time of year,” said Commission Chairman Chuck Eaton in a press release.

Proponents of growing Medical Cannabis in Georgia to provide CBD-oil for residents on the state list have released a 90-second Public Service Announcement seeking to make their case. Though, at 90-seconds, it’s more like an infomercial than a PSA.

The current law allows patients with eight specific conditions to use a form of low THC cannabis oil if approved by a doctor and the state.

In-state cultivation, however, is not legal leaving patients to find other ways to obtain the oil.

Peake is expected to pre-file his newly expanded medical cannabis legislation on Wednesday.

Tucked deep inside the 1,603-page federal spending measure is a provision that effectively ends the federal government’s prohibition on medical marijuana and signals a major shift in drug policy.

The bill’s passage over the weekend marks the first time Congress has approved nationally significant legislation backed by legalization advocates. It brings almost to a close two decades of tension between the states and Washington over medical use of marijuana.

Under the provision, states where medical pot is legal would no longer need to worry about federal drug agents raiding retail operations. Agents would be prohibited from doing so.

The Obama administration has largely followed that rule since last year as a matter of policy. But the measure approved as part of the spending bill, which President Obama plans to sign this week, will codify it as a matter of law.

More important, from the standpoint of activists, Congress’ action marked the emergence of a new alliance in marijuana politics: Republicans are taking a prominent role in backing states’ right to allow use of a drug the federal government still officially classifies as more dangerous than cocaine.

But before you lease space to open a dispensary, check out what Reason has to say on the topic,

In December 2014, Congress approved an omnibus spending bill that included a rider prohibiting the Justice Department (which includes the Drug Enforcement Administration) from using funds appropriated by that bill to “prevent” states from “implementing” their medical marijuana laws. The same rider, sponsored by Reps. Dana Rohrabacher (R-Calif.) and Sam Farr (D-Calif.), was included in the omnibus spending bill approved by Congress last month. That means it will remain in force for another fiscal year.

One reason the Rohrabacher-Farr amendment did not work as advertised is that the Justice Department refuses to interpret it the way Rohrabacher and Farr do. It is clear from the debate that preceded the House vote on the amendment in May 2014 that supporters and opponents of the rider both thought it would bar prosecution of people who grow, possess, or distribute medical marijuana in compliance with state law. But as I predicted last year, the Justice Department argues that prosecuting medical marijuana suppliers or seizing their property does not “prevent” states from “implementing” their laws.

Assuming the Rohrabacher-Farr amendment does ultimately affect enforcement of the federal ban on marijuana in states that allow medical use, that is not the same as eliminating the ban. The rider has no impact in the 27 states that do not have medical marijuana laws, and it applies only to the Justice Department, so it has no effect on actions by the IRS or the Treasury Department that make it difficult for medical marijuana suppliers to pay their taxes and obtain banking services.

More fundamentally, the amendment, which has to be renewed every fiscal year, does not change the Controlled Substances Act (CSA), which continues to classify marijuana as a Schedule I substance with no legal uses. Because marijuana is still prohibited by federal law, people who grow and sell it, no matter the purpose and regardless of their status under state law, commit multiple felonies every day. If no one is trying to put them in prison right now, that is only thanks to prosecutorial forbearance that may prove temporary.