On November 8, 1860, Savannah residents protested in favor of secession following the election of Abraham Lincoln.

Headquarters Military Division of the Mississippi, in the Field, Kingston, Georgia, November 9, 1864

5. To corps commanders alone is intrusted the power to destroy mills, houses, cotton-gins, etc.; and for them this general principle is laid down: In districts and neighborhoods where the army is unmolested, no destruction of such property should be permitted; but should guerrillas or bushwhackers molest our march, or should the inhabitants burn bridges, obstruct roads, or otherwise manifest local hostility, then army commanders should order and enforce a devastation more or less relentless, according to the measure of such hostility.

6. As for horses, mules, wagons, etc., belonging to the inhabitants, the cavalry and artillery may appropriate freely and without limit; discriminating, however, between the rich, who are usually hostile, and the poor and industrious, usually neutral or friendly. Foraging-parties may also take mules or horses, to replace the jaded animals of their trains, or to serve as pack-mules for the regiments of brigades. In all foraging, of whatever kind, the parties engaged will refrain abusive or threatening language, and may, where the officer in command thinks proper, given written certificates of the facts, but no receipts; and they will endeavor to leave with each family a reasonable portion for their maintenance.

7. Negroes who are able-bodied and can be of service to the several columns may be taken along; but each army commander will bear in mind that the question of supplies is a very important one, and this his first duty is to see to those who bear arms.

8. The organization, at once, of a good pioneer battalion for each army corps, composed if possible of Negroes, should be attended to. This battalion should follow the advance-guard, repair roads and double them if possible, so that the columns will not be delayed after reaching bad places.

Former Confederate General John B. Gordon was sworn-in as Governor of Georgia on November 9, 1886.

Franklin D. Roosevelt made his 15th trip to Warm Springs, Georgia on November 8, 1928 after winning the election for Governor of New York.

Richard B. Russell, Jr. was elected to the United States Senate on November 8, 1932 and would serve until his death in 1971. Before his election to the Senate, Russell served as State Representative, Speaker of the Georgia House, and the youngest Governor of Georgia; his father served as Chief Justice of the Georgia Supreme Court. On the same day, part-time Georgia resident Franklin D. Roosevelt was elected President of the United States.

The next day, November 9, 1932, President-elect FDR addressed a national broadcast to the American people and mentioned that he would spend Thanksgiving at his “second home” in Georgia.

On November 9, 1938, Kristallnacht began the organized destruction and looting of Jewish businesses and homes in Munich, Germany.

On November 9, 1989, the former East Germany announced that citizens could cross the border to West Germany. That night, crowds began tearing down sections of the wall that divided the city.

On November 8, 1994, Republicans won control of the United States House of Representatives and Senate in what came to be called the “Republican Revolution.” 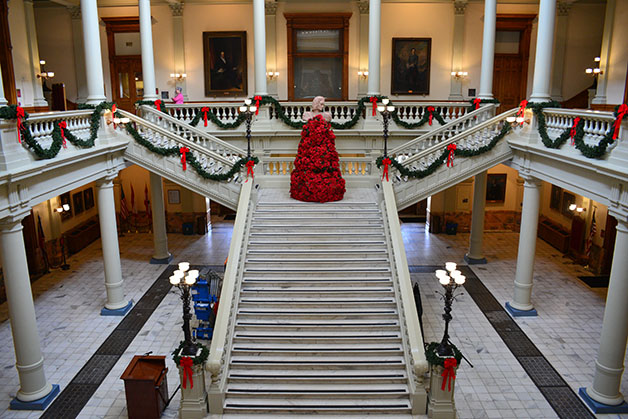 “We are fortunate to have a wealth of talent and experience in the State Senate,” said President Pro Tem David Shafer (R-Duluth). “I am confident that our new committee chairs and committee members will do great work.”

Once a piece of legislation is introduced in the Senate, it is assigned to a committee depending on its topic. If the committee gives the legislation a “do pass” recommendation, the proposed law is then sent to the Rules Committee for consideration.

The appointed chairs will oversee the operation and order of Senate committee meetings; including calling for action on bills, resolutions or other matters assigned to that committee.

“This is an incredibly powerful group of leaders from across Georgia,” said State Chair Ralph Hudgens. “It shows that Ted Cruz is the candidate that best reflects our Georgia values in the presidential race and that Georgia is confident a President Cruz will stand up and fight for them.”

“Georgians are ready for a strong, conservative leader in the White House and that’s why Ted Cruz has built so much support around the state,” said Rep. Jody Hice. “We trust Senator Ted Cruz to be the true conservative who can help turn America around.”

The retired neurosurgeon told  about 2,000 people at the Cobb Energy Centre he wanted more training for citizens to prepare for jihadist attacks – akin to the air drills conducted in schools and offices during the Cold War.

“We need to be thinking about how we train our people to be able to react appropriately when you get into a situation with extremists in order to save your life,” he said.

“I asked the Syrians, what is your desire? All of them said they wanted to be resettled in their country. I didn’t hear one person say they wanted to move to America. And they said we could financially support Jordanians” and their system of refugee camps.

He urged Republicans to reject “humanitarian gestures” that he said would threaten U.S. security.

“Our government gives us false choices. They say we can either be cold, cruel and heartless or you can take thousands of these refugees out,” he said. “They never give us the third option, which is the best: Take care of them over there.”

Also in town yesterday was Carly Fiorina, who is still running for President. From CBS 46,

“Donald Trump is no better than a politician, he’s an entertainer,” said Fiorina.

“I’ll tell you why I think he said some outrageous things last night. Because Ted Cruz had a good week and Donald Trump needed the spot light back,” she said, responding to Trump’s call to ban Muslims from entering the United States.

Speaking to a smaller room of students and Georgia Republican Leaders at Georgia Tech, Fiorina also talked about breaking down the nation’s tax code.

Notably, Fiorina wore red and black in a visit to Georgia Tech a week and a half after the Bulldogs beat Tech 13-7.

The ballot is set for the 2016 Presidential Primary elections in Georgia, according to a Press Release from SOS Kemp.

Qualifying is already underway for the first-ever elections for Mayor and City Council in Tucker.

Qualifying officially [began Monday,] Dec. 7, according to a news release from cityhood supporters. The first election will be held on March 1, 2016.

If you’re planning to run, get your checkbook ready. Qualifying fees for this election are hefty. Running for mayor will cost $600 and city council will cost $420. Decatur recently held City Commission elections and charged $144 to qualify.

Elections will be held for three City Council Districts, with two posts per district, for six members of Council.

Also holding an election on March 1, 2016 will be Paulding County Commission District 1.

Two men will ask the voters to choose between them March 1 to fill a vacant seat on the Paulding County Commission.

If you’re in Paulding County or just a glutton for elections, here are the websites for candidate Ron Davis and candidate Jeremiah Fields.
An interesting electoral twist is that those elections in Tucker and Paulding County will be held at the same time as the Presidential Preference Primary. In Tucker’s case, it might mean more people cast ballots in the first municipal election than in years to come.
The first election of the New Year will be held on Tuesday, January 16, 2016 to fill the State House District 58 seat vacated by former State Rep. Simone Bell.