On the Presidential campaign trail, Franklin Delano Roosevelt arrived in Atlanta on October 23, 1932, speaking to 10,000, and continued on to his “second home” at Warm Springs, Georgia. 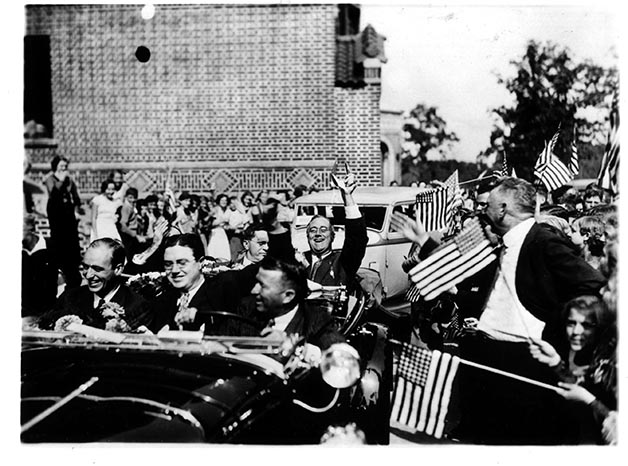 FDR campaigning in Atlanta and Georgia in 1932. 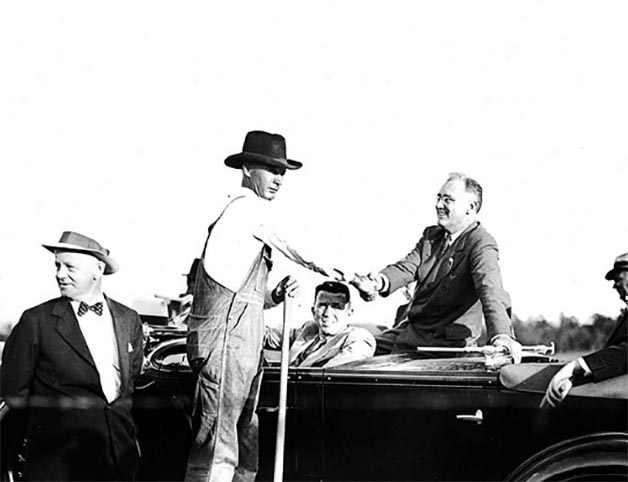 When he arrived at Warm Springs, FDR gave a short speech:

“Two more weeks to go. . . . First, let me say this: this old hat, a lot of you people have seen it before. It’s the same hat. But I don’t think it is going to last much longer after the 8th of November. I have a superstition about hats in campaigns, and I am going to wear it until midnight of the 8th of November. . . . Well, it’s fine to see, and I’m looking forward to coming down here for the usual Thanksgiving party at Warm Springs, and having a real old-fashioned Thanksgiving with my neighbors again. I thank you!”

On October 23, 1971, the Coca-Cola Company launched the advertising campaign “I’d Like to Teach the World to Sing.”

Georgia-born Clarence Thomas was sworn in as an Associate Justice of the United States Supreme Court on October 23, 1991.

I’m grateful to all of you who take a few minutes out of your day to read about Georgia politics. My sincerest personal thanks. Here are the two best things I read this weekend. From Arthur C. Brooks at the American Enterprise Institute, via the Wall Street Journal.

For many people, gratitude is difficult, because life is difficult. Even beyond deprivation and depression, there are many ordinary circumstances in which gratitude doesn’t come easily. This point will elicit a knowing, mirthless chuckle from readers whose Thanksgiving dinners are usually ruined by a drunk uncle who always needs to share his political views. Thanks for nothing.

Beyond rotten circumstances, some people are just naturally more grateful than others. A 2014 article in the journal Social Cognitive and Affective Neuroscience identified a variation in a gene (CD38) associated with gratitude. Some people simply have a heightened genetic tendency to experience, in the researchers’ words, “global relationship satisfaction, perceived partner responsiveness and positive emotions (particularly love).” That is, those relentlessly positive people you know who seem grateful all the time may simply be mutants.

But we are more than slaves to our feelings, circumstances and genes. Evidence suggests that we can actively choose to practice gratitude — and that doing so raises our happiness.

This is not just self-improvement hokum. For example, researchers in one 2003 study randomly assigned one group of study participants to keep a short weekly list of the things they were grateful for, while other groups listed hassles or neutral events. Ten weeks later, the first group enjoyed significantly greater life satisfaction than the others. Other studies have shown the same pattern and lead to the same conclusion. If you want a truly happy holiday, choose to keep the “thanks” in Thanksgiving, whether you feel like it or not.

One explanation is that acting happy, regardless of feelings, coaxes one’s brain into processing positive emotions. In one famous 1993 experiment, researchers asked human subjects to smile forcibly for 20 seconds while tensing facial muscles, notably the muscles around the eyes called the orbicularis oculi (which create “crow’s feet”). They found that this action stimulated brain activity associated with positive emotions.

According to research published in the journal Cerebral Cortex, gratitude stimulates the hypothalamus (a key part of the brain that regulates stress) and the ventral tegmental area (part of our “reward circuitry” that produces the sensation of pleasure). It’s science, but also common sense: Choosing to focus on good things makes you feel better than focusing on bad things.

In my lifelong struggle with depression, one of the best tools I’ve found is the practice of acting as though I’m happy. Others call this, “fake it till you make it.” Even when I don’t fell like getting off the couch and doing something, if I just go take the dog for a walk, I know that helps. Repeat that every day, and before I know it, I’m feeling better.

Rick Jackson, CEO of Jackson Healthcare, has made quite a splash in Georgia Republican politics, but I, and likely many others, didn’t know much about him. Jennifer Brett of the AJC has written a great profile about the man behind the money that is shaping Georgia politics.

The millionaire takes the stage.

With him are the governor and lieutenant governor of Georgia, Hollywood stars Kate Bosworth and Hayden Christensen, Grammy-winning artist Michael W. Smith, Emmy-winning broadcaster Monica Pearson and thousands of fans who have packed the fabulous Fox Theatre for the world premiere of “90 Minutes in Heaven.”

“This is a special occasion,” says Rick Jackson, the entrepreneur behind Jackson Healthcare and the producer behind the film.

Jackson has made headlines and faced opposition with his efforts to drive legislation to partially privatize the state’s child welfare/foster care system.

“Part of the reason Rick has been reluctant to share his story is he’s just humble,” said longtime friend and business partner Larry Powell. “At one level his life doesn’t make sense. When you put it through the filter of faith, it makes all kinds of sense.”

“He grew up in Techwood Homes in a tiny apartment with a concrete floor and an alcoholic mother,” [Bill] Franklin said. “There could be a lot of guys like that who could have bad attitudes and a bad life. There are a lot of foster kids who need to see somebody like Rick and think, some day I can be like that guy.”

I strongly encourage you to find a few minutes, either today, or maybe on Thursday or over the Thanksgiving weekend, and read this great story in its entirety. I promise you will be glad you did.

The AJC Political Insider points to a couple of digital ads being run by the Johnny Isakson campaign, six months before the Republican Primary in May 2016.

The ads, shown below, are on UGASports.com, Facebook, CNN.com, FoxNews.com, the Drudge Report, Breitbart, Pandora and — full disclosure — AJC.com.

Note that the football themed spot was uploaded two years ago, according to the vimeo page for the ad. Take a closer look at the “Hardest Working” and you’ll notice that it’s composed entirely of animated text and still photos with the “Ken Burns effect.” These aren’t newly-shot ads, it’s only the current online placement that’s truly new.

He was blown away to learn that the top aide to imprisoned DeKalb County Commissioner Elaine Boyer had nine felony counts, including theft, diminished to just three misdemeanor obstruction charges after agreeing to a plea deal.

Robert Lundsten was sentenced to a year of probation for misspending $310 worth of taxpayers’ money. He was originally facing more than a dozen years in prison.

Meanwhile, DeKalb County Solicitor General Sherry Boston may know why the charges were reduced. After all, she’s running against James for district attorney. She wrote on her Facebook page that James misused his county credit card for meals and has failed to explain why.

“They’ve got major problems in the government of DeKalb County, Georgia and they definitely need a tough, straight forward, prosecutor in that county and they don’t have it today,” Bowers said.

The latest from Secretary of State Brian Kemp on the data release that potentially exposed personal information for registered voters is in a letter to the voters posted on his website:

•  The SOS office is in discussions with Ernst & Young about engaging the firm for a security audit of the entire SOS office;

•  New rules have been implemented so that only the Chief Information Officer can make changes to the voter registration database, and doing so requires explicit instruction from the SOS himself. Going forward, three senior staff members will review any voter data before it is released.

If you’re in an area that has a runoff election, check with your local voter registration and elections office if you’re planning to vote early in person. Because of the Thanksgiving holiday, most will not hold early voting on Thursday and Friday of this week, so your only options are Monday, Tuesday, and Wednesday, and of course, runoff election day, December 1, 2015.

There is a far worse way than runoff elections to deal with tie votes – in Mississippi, and possibly 23 other states, tied elections are decided by drawing straws.

To break a tie in a House election, a Democrat and a Republican reached into a red canvas bag and each plucked out a silver-plated business card box.

Republican Mark Tullos chose the box with the short, 2-inch red straw. Democrat Bo Eaton picked the one with the longer, 3-inch green straw, giving him the victory.

Tullos didn’t show any emotion. Before the drawing, he said he would protest the results if he lost. He left the crowded conference room without talking to reporters.

He had already filed an appeal Friday, saying he questions whether votes from the Nov. 3 election were counted fairly.

The National Conference of State Legislatures says 24 states have laws that say a tied legislative election is decided by drawing straws or by flipping a coin.

Eaton’s win blocks the GOP from having a supermajority in the state House, which would have allowed, among other things, to let Republicans make decisions about taxes without seeking help from Democrats.

The takeaway is that every single vote counts. Also, that 23 other states are just as goofy as Mississippi. Cue Mansell McCord with a story about Mississippi politics.

Look! Up in the sky! It’s a monorail headed for Sandy Springs, if a planning commissioner gets his way.

“If Disney can move a hundred thousand people a day, we can do it, and compared to MARTA, the costs are marginal,” said commission chair Lee Duncan at the group’s Nov. 19 meeting, during a wide-ranging discussion about urban planning.

Duncan was referring to a famed elevated monorail built as a futuristic mass transit at California’s Disneyland in the 1950s. His Sandy Springs version would run from the forthcoming City Springs redevelopment to MARTA stations and loop through Perimeter Center.

“I know you guys look at me and say, ‘Duncan, you’re crazy,’” Duncan said, but insisted that “implementation of a monorail” deserves a thorough study to “kill it or provide some context to move forward.”

Assistant City Manager Jim Tolbert indicated that Duncan previously raised the idea in internal meetings with staff. And in fact, Tolbert said, he gave the monorail idea to a consultant team developing the city’s new land-use plan to “seriously review it.”

However, Tolbert gave hints that the monorail will prove infeasible—such as suggesting that Duncan pay for half its cost.

“We’ll name it after him if it works,” Tolbert said.

Georgia leads the nation in the ignominious category of “most citizens on probation,” according to WSB-TV.

Georgia leads the nation in placing its citizens on probation, a distinction that is now being studied by the state’s criminal justice reform experts, a federal report shows.

The state’s probation population at the end of last year was 471,067, according to newly released numbers from the U.S. Bureau of Justice Statistics.

Georgia’s number remains the highest in the nation — by far — in spite of a 9 percent decline over the previous year, The Atlanta Journal-Constitution reported.

Georgia also topped the charts for its probation rate, which was quadruple the national rate and more than double the rate posted by any other state, the newspaper reported.

Some in Georgia say the numbers are significantly inflated, but others say the numbers reflect an overuse of probation in Georgia, where courts contract with private probation companies to supervise and collect payments from people who can’t afford to pay tickets on the day they go to court.