The Continental Congress renamed their new nation the United States of America, from the previously used “United Colonies.”

On September 9, 1933, WSB Radio in Atlanta was upgraded to broadcasting via 50,000 watt transmitter. The first broadcast included Will Rogers and a letter from President Roosevelt.

On September 9, 1939, an audience at the Fox Theater in Riverside, California watched a preview of Gone With the Wind.

The first actual computer bug was identified on September 9, 1947, when Grace Hopper removed a moth from an electrical relay in the Harvard Mark II computer. Hopper received her Ph.D. in Mathematics from Yale in 1934 and attained the rank of Rear Admiral, Lower Half in the United Stated Navy. USS Hopper (DDG-70) was named after her.

Happy 72d birthday to former Congressman John Linder. Linder served in the State House from 1974-1980 and 1982-90. In 1990 he ran unsuccessfully for Congress against incumbent Democrat Ben Jones; in 1992, after redistricting, Linder was elected to Congress from the 7th District and served until his retirement after the 2010 election.

Candidates will qualify in the Elections Division of the Office of Secretary of State, located at 802 West Tower, 2 Martin Luther King Jr. Drive, in Atlanta. The qualifying fee is $400.

Virginia-based political consultant Brett O’Donnell pled guilty to federal charges of making false statements in relation to an investigation by the Office of Congressional Ethics and may serve up to five years and be fined up to $250,000. From the Macon Telegraph,

Brett O’Donnell, of Virginia-based O’Donnell & Associates, pleaded guilty to an information — a charging document used in lieu of an indictment — in U.S. District Court for the Middle District of Georgia.

The document alleges that the OCE launched an investigation in March 2014 into whether a congressman’s office had improperly used congressionally appropriated funds to pay O’Donnell for campaign-related services.

The court documents don’t identify the congressman, other than to call him “Congressman A.”

When interviewed by OCE on June 23, 2014, O’Donnell made several false statements to “minimize and conceal” the nature and scope of his role in the congressman’s campaign and his interactions with the congressman’s chief of staff, according to the court documents.

Allegations surfaced that O’Donnell was paid from Broun’s official congressional allowance for help with his campaigns.

Here’s the most interesting line from a Roll Call story on O’Donnell’s plea.

He will be sentenced in the U.S. District Court for the Middle District of Georgia at a later date, and has agreed to cooperate with the government as part of the plea deal.

I don’t think you’re asked to cooperate with the government unless they’re seeking to charge someone else close to you.

District Attorney Robert James, who has said he lacked adequate resources to fully investigate all the complaints, will soon hire more staff dedicated to the task.

The DeKalb Commission unanimously approved funding Tuesday for five employees — attorneys, investigators and paralegals — for James’ corruption-busting efforts. The $186,000 appropriation covers their salaries for the rest of the year. The positions will cost about $493,000 annually if the commission continues to fund them.

“He has a big job to do, and he needs the funding to do it,” said Commissioner Sharon Barnes Sutton, who pushed for the additional money.

A divided Board of Commissioners voted 3-2 to approve the county’s $789.2 million budget for fiscal 2016 at its meeting Tuesday morning with some board members criticizing the way the county approaches the budget process.

The Cobb County Board of Education will consider extending an existing E-SPLOST.

At this morning’s school board meeting, Cobb Superintendent Chris Ragsdale is expected to ask the board for permission to begin planning for a new 1 percent special purpose local option sales tax program once the existing program expires.

Voters approved SPLOST IV in March 2013. Tax collections began in January 2014 and expire at the end of December 2018, according to Brad Johnson, the district’s chief financial officer. The Cobb School District is projected to collect $717.8 million during that span, while Marietta City Schools is projected to collect $55.4 million, officials say.

“It’s something that’s needed for a number of reasons,” Scamihorn said, citing high expectations for education in the county, crowding at existing schools and the growth the county is expected to see in south Cobb.

Scamihorn said he expected a SPLOST V would go before voters sometime in 2017, and acknowledged the district was starting early in the planning process.

The Charles Colson Task Force on Federal Corrections is a nine-person, bipartisan group that is congressionally mandated to analyze data and make recommendations to tackle challenges in the federal corrections system. The members have been meeting this year with groups that would be affected and plan to finalize their suggestions in December and to release their final report in January.

In the public round table meeting at the Georgia Capitol, task force members heard from Georgia Court of Appeals Judge Michael Boggs and State Bar of Georgia director of governmental affairs Thomas Worthy, co-chairmen of the Georgia Council on Criminal Justice reform. The discussion was moderated by former state Rep. Jay Neal, the executive director of the Governor’s Office of Transition, Support and Reentry.

The Georgia initiative began in 2011 and has become a signature project for Republican Gov. Nathan Deal. It has led to the passage of comprehensive laws to overhaul the adult and juvenile criminal justice systems and to aid the re-entry of offenders into society once they are released.

Keys to success in Georgia included executive leadership from the governor, the will to get past politics and partisanship, collaboration, and inclusion of those affected, Boggs told the federal task force members.

Neal and Boggs stressed that simply looking at sentencing, probation and diversion programs isn’t enough, that meaningful efforts need to be made to help offenders while they are in prison so they are adequately prepared for their release.

If the SEC Primary might raise the profile of conservatives in the Republican Presidential Primary, it might affect the Democratic nomination by enhancing the influence of African-American Democrats, who can dominate primary elections in the South. From the Charlotte Observer,

To compete in those states, Sanders will have to do something he doesn’t have to do in Iowa or New Hampshire: Win African-American votes. In 2008, 55 percent of South Carolina’s Democratic primary voters were black.

“That demographic is not matched by the crowds at Bernie Sanders’ events,” said Scott Huffmon, a Winthrop political scientist. “The simple fact is in South Carolina, if you can’t make significant inroads with black primary voters, you’re just not going to have any success in the Democratic primary.”

The Georgia Republican Party will host Frank Luntz as the keynote speaker at their Chairman’s Dinner on Monday, October 5, 2015 in Atlanta. 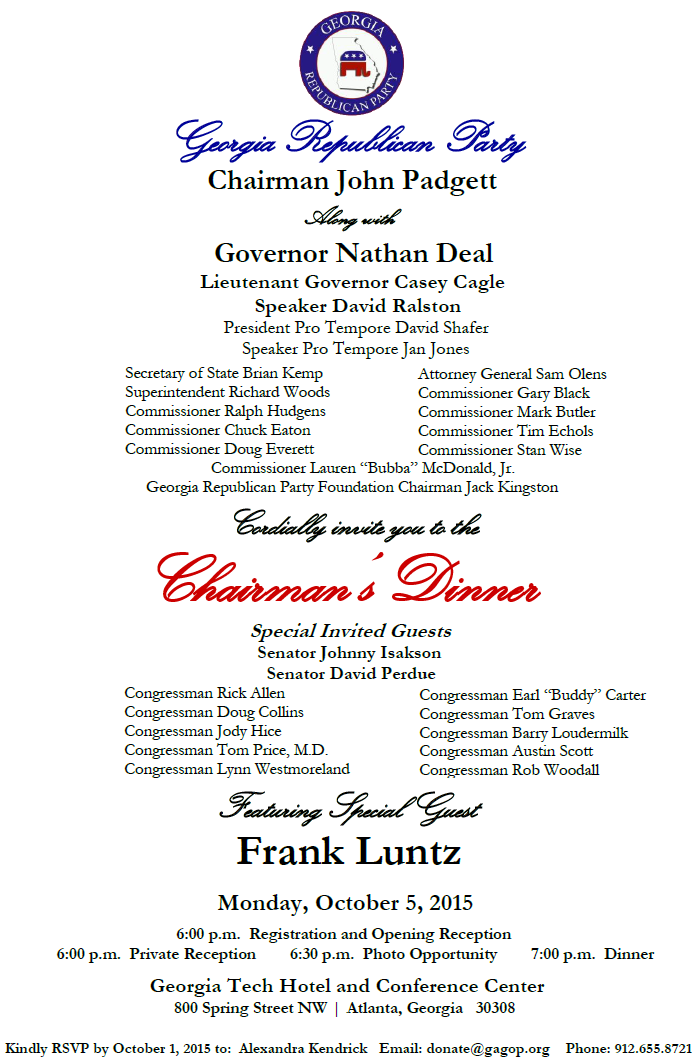 Later that month, on October 24, 2015,  GAGOP will host a Second Amendment Celebration at Wild Bill’s in Duluth. 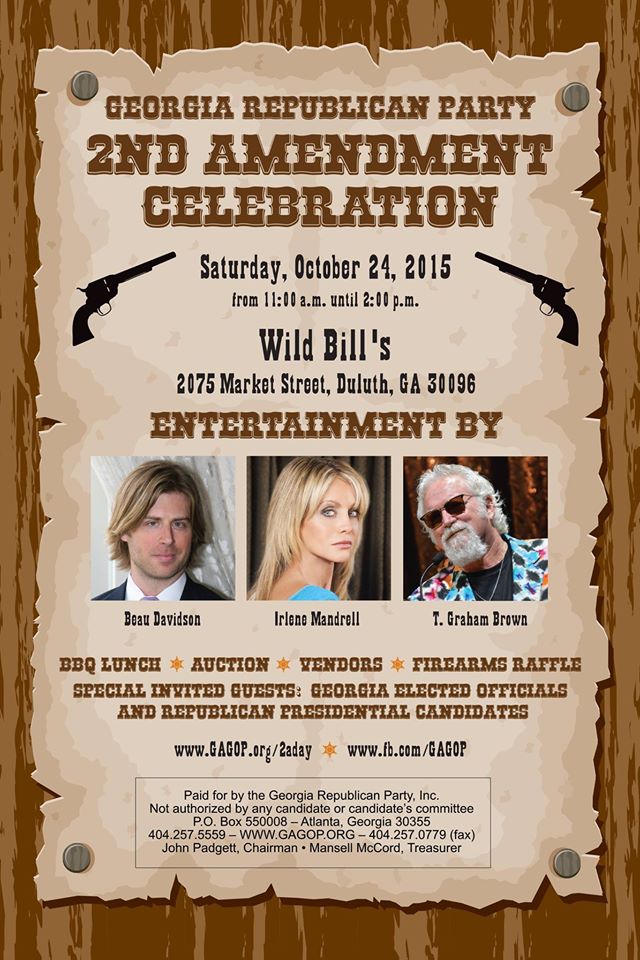