The first printed copy of the Declaration of Independence arrived in Savannah on August 8, 1776 and was read publicly for the first time on August 10, 1776.

General George Washington created the Purple Heart on August 7, 1782. Click here for an interesting history of the award.

On August 7, 1790, a delegation of Creeks met with the United States Secretary of War and signed the Treaty of New York, ceding all land between the Ogeechee and Oconee Rivers to Georgia.

On August 8, 1863, General Robert E. Lee offered his resignation in a letter to Confederate President Jefferson Davis, following the Battle of Gettysburg.

Theodore Roosevelt, who served as President from 1901 to 1909, was nominated for President by the Progressive Party, also called the Bull Moose Party, on August 7, 1912.

On August 8, 1929, Georgia Governor Lamartine Hardman signed legislation placing on the ballot for Fulton and Campbell County voters a merger of the two. 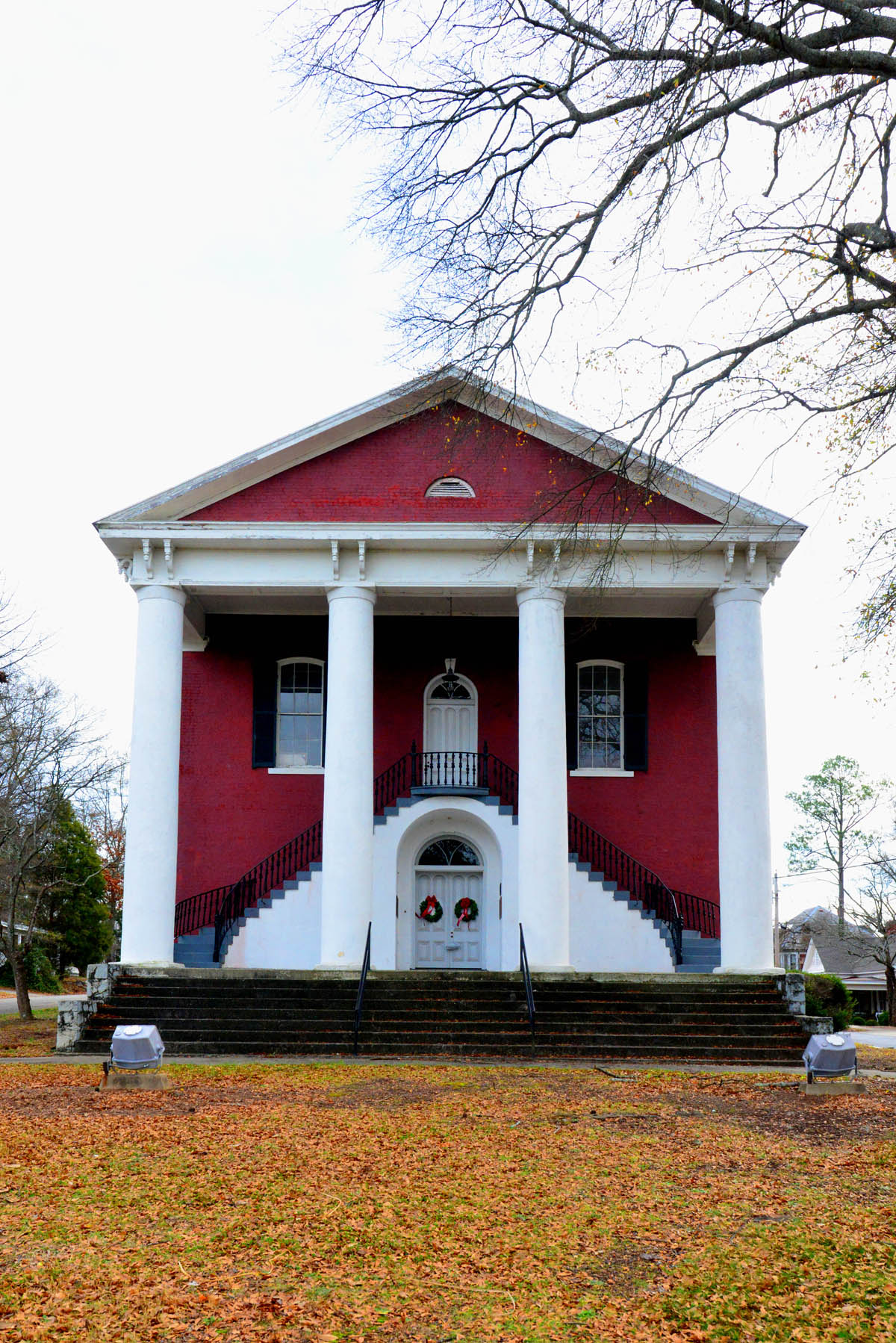 Voters ratified a new version of the State Constitution on August 7, 1945. Among the new features was the establishment of the State Board of Corrections to ensure humane conditions.

The board was directed to be more humane in its treatment of prisoners and abolished whippings, leg irons, and chains. Until 1945, prisoners in Georgia could expect to have heavy steel shackles put on by a blacksmith upon arrival. They were then taken out to work under severe conditions.

The caravan bearing 43 ounces of Dahlonega gold to be used in covering the Georgia State Capitol dome reached the Capitol and delivered it to Governor Marvin Griffin on August 7, 1958.

On August 7, 1964, Congress passed the Tonkin Gulf Resolution, which would be used as the legal basis for U.S. involvement in Vietnam.

Richard Nixon and Spiro Agnew were nominated for President and Vice President by the Republican National Convention on August 8, 1968.

On August 8, 1974, President Richard Nixon resigned, effective at noon the next day.

I’ll be live from the Red State Gathering today on Georgia Public Broadcasting’s “Political Rewind.” You can tune in on 88.5 FM in the Metro Atlanta area, listen live online, or on your local GPB radio station.

This weekend, the epicenter of the 2016 GOP Presidential campaign comes to town as the Red State Gathering convenes at the InterContinental Hotel in Buckhead. Full weekend tickets have been sold out for some time, but Party Passes are still available. That’s probably the hot ticket anyway, as Donald Trump will be speaking at Saturday night’s Tailgate at the College Football Hall of Fame.

The Ted Cruz presidential campaign has named its Georgia leadership:

This Saturday, Sen. Cruz will speak at the 7th Annual Red State Gathering in Atlanta and then take his “Cruz Country” bus tour through Newnan and Midland. Event schedule may be found at https://www.tedcruz.org/cruzcountry/.

“Sen. Cruz is the kind of principled conservative we need to stop the Washington Cartel of establishment politicians and special interests who govern to enrich themselves before the American people,” said Georgia Chairman Ralph Hudgens. “I am proud to serve as his Georgia Chairman and lead this incredibly strong team of Georgia leaders.”

“I’ve known Sen. Cruz as a man of great strength of character and I’m deeply honored to serve in this role,” said Congressman Jody Hice.

“We believe Georgia’s March primary will prove to be a critical contest on the path to the Republican nomination, and we intend to campaign hard in the state. We appreciate Congressman Collins’ gracious support and look forward to working alongside him as we share our message of fighting and winning with the people of Georgia and America.”

“Gov. Walker represents the best of America,” said Collins. “He is a man who lives the values of faith and hard work that make this country great. He has not only fought for conservative values, but he has actually won. That is why I am proud to announce my support for Gov. Walker.” 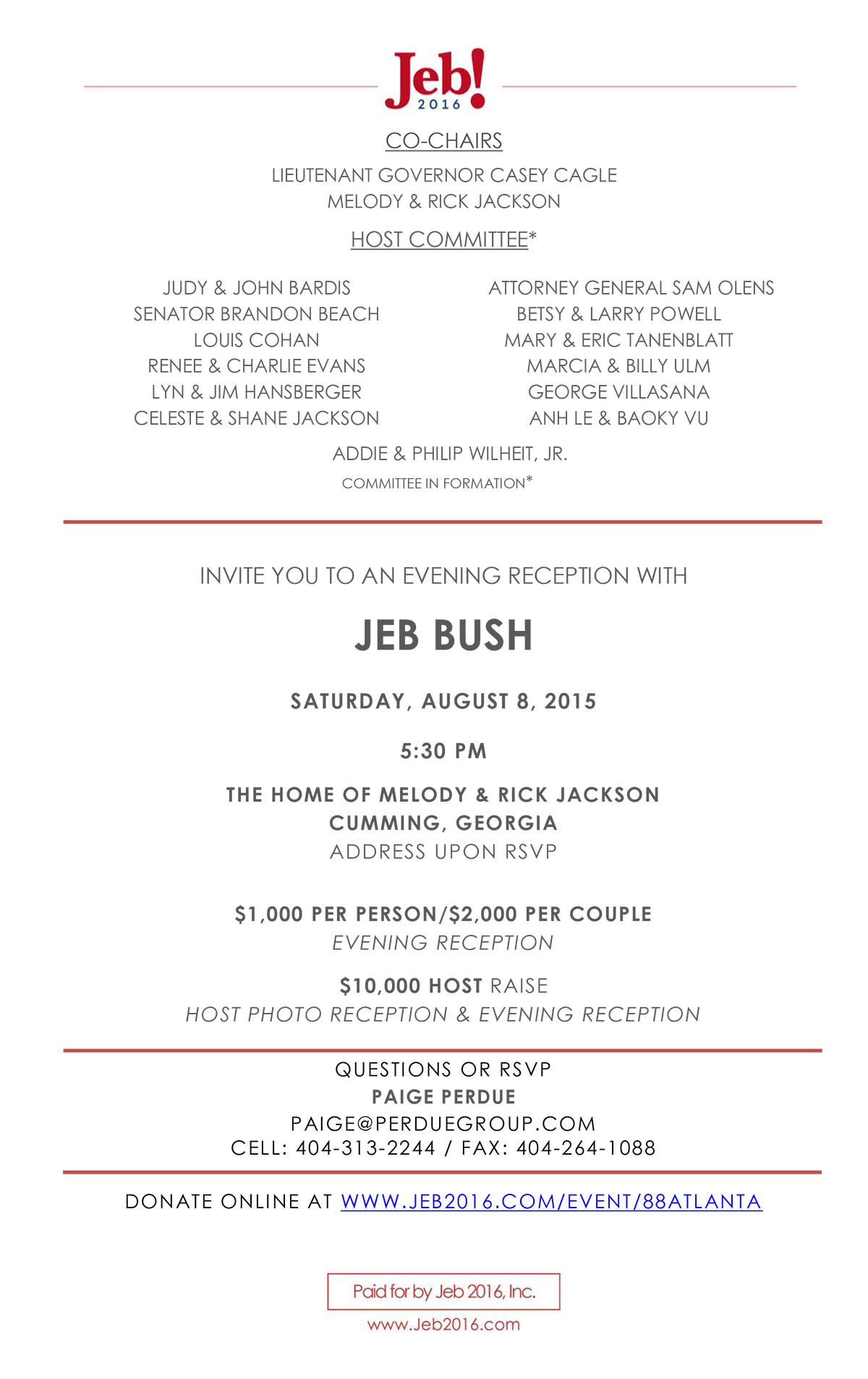 Wisconsin Governor Scott Walker will make an appearance at Lovie’s Barbecue, 3420 Piedmont Road Northeast, Atlanta, GA 30305 in Buckhead for lunch on Saturday. Click here to sign up for free tickets.

For questions or to RSVP, please contact Sarah Robinson at 601-826-7347 or srobinson@marcorubio.com or Caitlyn Cooper at ccooper@comm-360.com 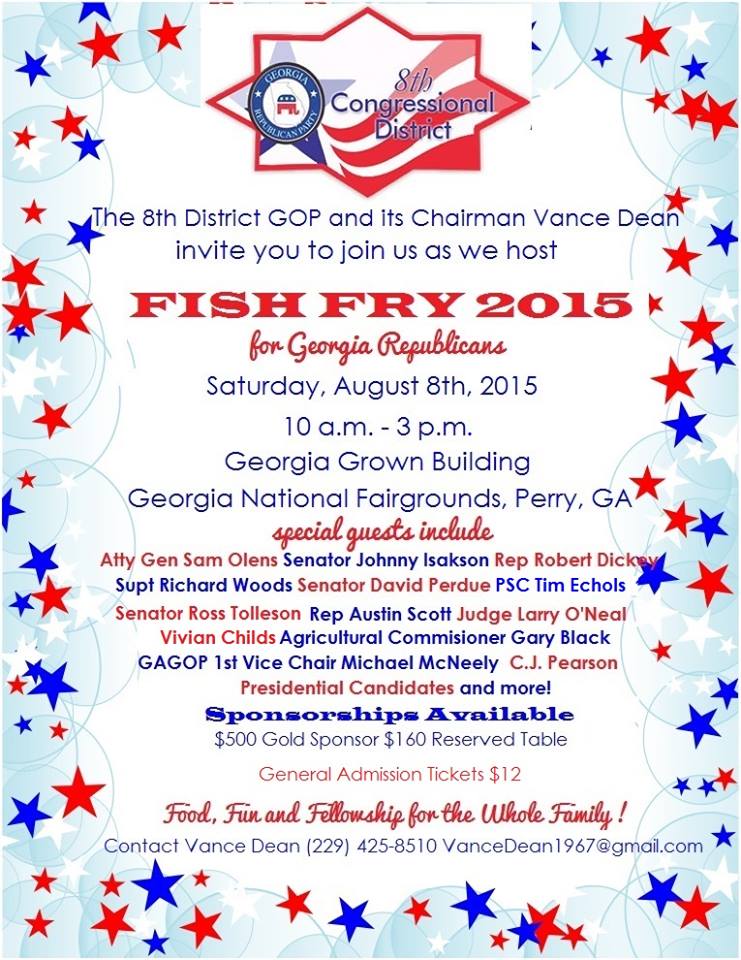 And, of course, United States Senator Ted Cruz will be touring the state, beginning in Savannah.

Tomorrow at 3:30 PM, the Cruz Bus Tour pulls in to Sprayberry’s on Jackson Street in Newnan for a Grassroots Rally.

So far, Barbecue is the leading Georgia candidate for President. That has the be the Georgia industry that is benefitting most from the SEC Primary.

Georgia Republicans Brant Frost V and Katie Frost accompanied the Ted Cruz campaign to the Cleveland RNC debate last night and sent in some photos to give you an idea what it was like in person. 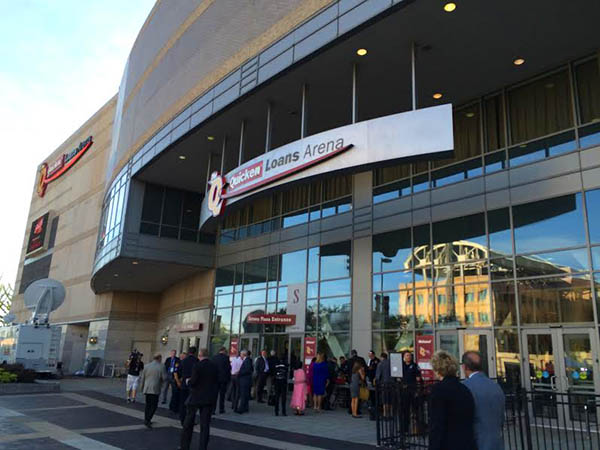 Here’s Katie waiting for the debate to start. 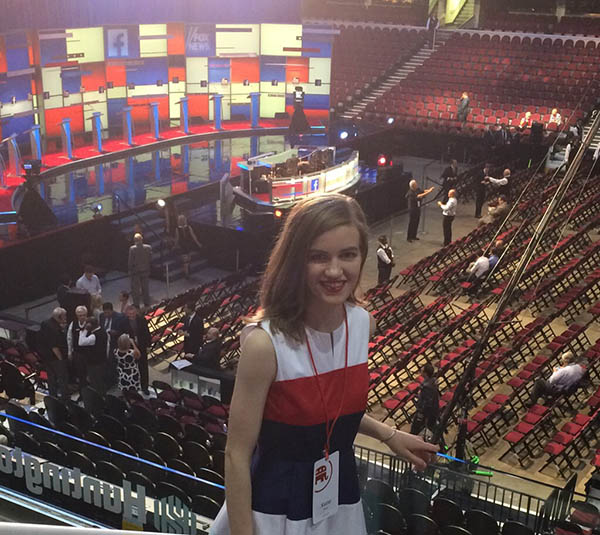 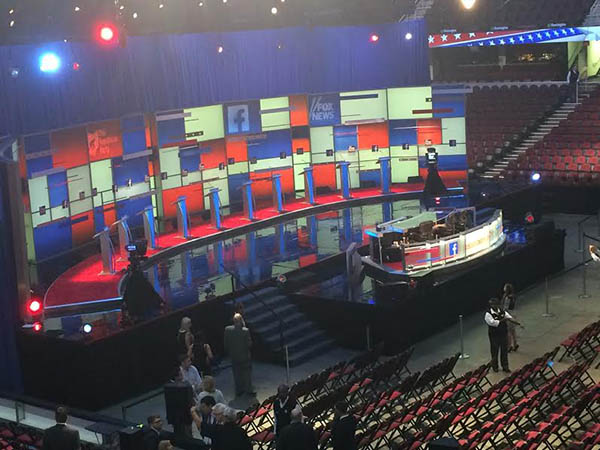 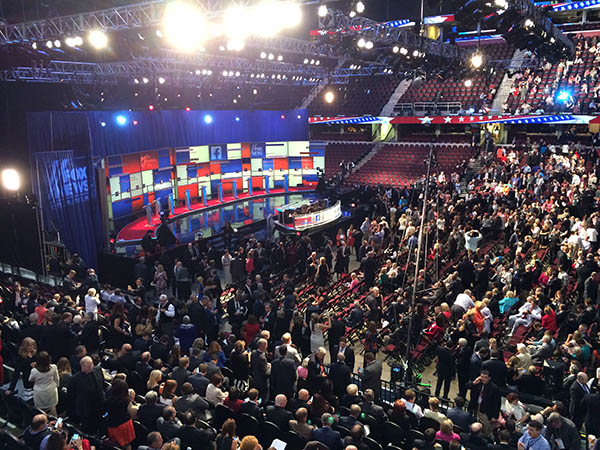 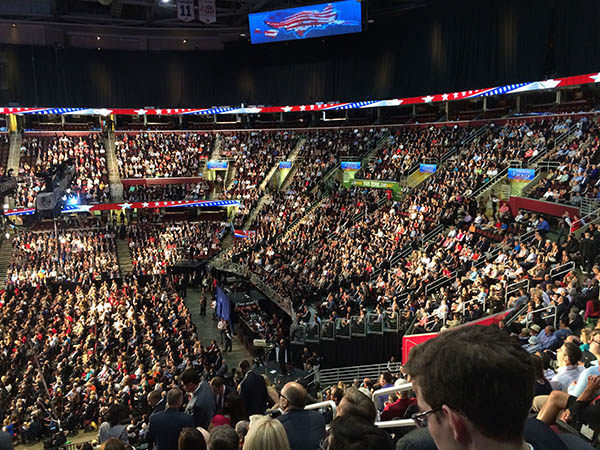 If I’m not mistaken, that’s the back of Brant’s head. 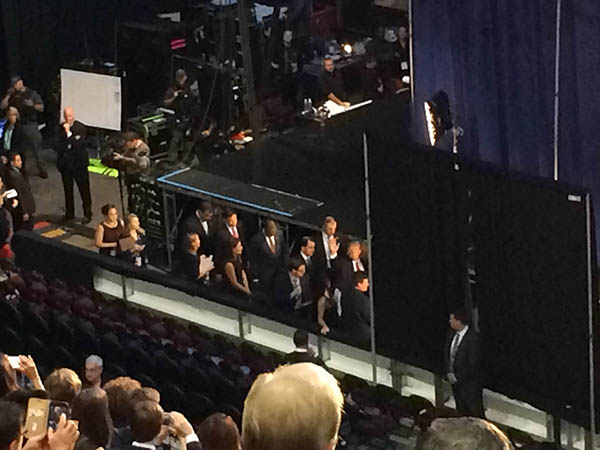 The candidates enter the stage via cattle chute, with Donald Trump waving to the crowd, then they huddle onstage singly and in small groups. 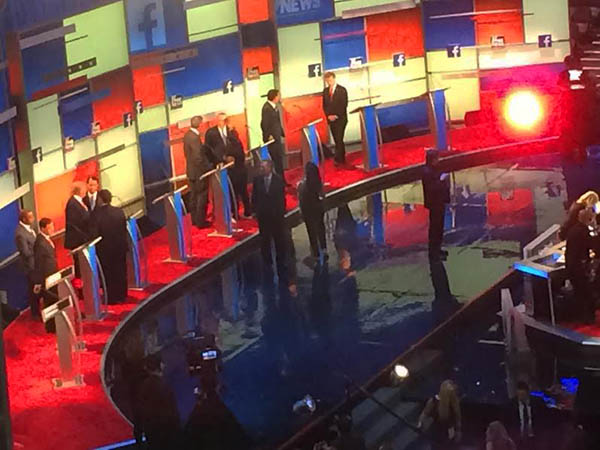 Members of the Republican National Convention, in town for a meeting and the debate, filled the center section on the floor. I’m pretty sure Georgia’s GOP Chair John Padgett, Executive Director Adam Pipkin, and National Committee Members Linda Herren and Randy Evans are in there, but if you can pick them out, your eyes are better than mine. 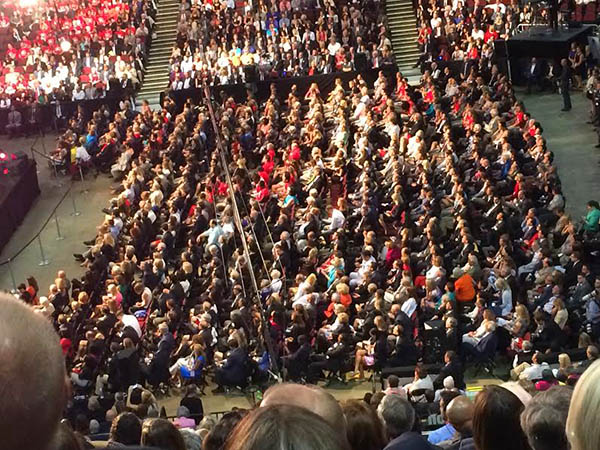 The good thing about listening to political speeches is you find out the real reason why things happen.

Fallacy No. 1: If we lead the way, the world will follow.

The president said, “The only reason that China is getting serious about their emissions is because of us.” Throughout his speech, and throughout the comment period of this new EPA rule, the Obama administration assumes that if America will only get serious about climate change, the world will follow.

Truth be told, Germany has led the way in energy transformation. They declared war on coal and nuclear, and set an unbelievable goal to be at 50 percent renewable by 2030 and 80 percent by 2050.

German families now pay three times what most Americans pay for power. Companies like BMW are moving certain manufacturing processes “offshore” to America because of the cheap energy prices, particularly to states like South Carolina and Georgia. They’re learning about the true costs of government-mandated clean power.

The president’s ideas sound much like the German experiment. My guess is that India, China and other countries will smile and nod at the president, but then spend billions buying the very coal we used to burn. Sadly, their plants will not be near as clean-burning as ours, and the net result in the world after the president’s plan could be an increase in carbon—instead of a reduction.

At the Georgia Public Service Commission, we have gone to great lengths to create a diverse portfolio to protect our ratepayers. This rule unravels all the planning we have done for the last 20 years.

Under this rule, a good economy becomes our enemy, and a polar vortex could trigger a substantial fuel cost increase.

Under this rule, the EPA would force us to abandon another 3900 MW of fossil generation without regard to the $5 billion invested to install environmental controls.

I can only hope that a court might grant a stay of this rule until the costs to ratepayers can be properly analyzed and compared to the alleged benefits.