On August 6, 1958 the wagon train carrying gold from Dahlonega to gild the State Capitol dome reached Atlanta, where city officials were not prepared to receive them.

On August 6, 1965, President Lyndon B. Johnson signed the Voting Rights Act; Rev. Martin Luther King, Jr. was in attendance and was given one of the pens Johnson used to sign the Act. Here is an auction for one of the pens used in the VRA signing.

John Hughes, director of every meaningful teen angst movie of the 1980s (except Say Anything) died on August 6, 2009.

The statement from Cagle, via the Bush campaign:

“Governor Bush is a proven leader with the right vision and skills to strengthen our country and transform Washington. His commitment to reforming education and encouraging private sector job growth is just what we need from our next President. Now, more than ever, we need somebody that can tackle our challenges head on, bring about real solutions, and restore our faith in those elected to represent us in Washington. There’s no doubt in my mind that Governor Bush will be that kind of President and I’m proud to support him.”

“Our country is in need of a strong leader who can bring us back from the massive federal overreach we have seen for the last six years. Governor Bush’s proven conservative record and can-do style exemplify the qualities we need in the White House in order to get our economy growing and encourage job creation.”

Word on the street, or perhaps on the dirt road, is that Congressman Jody Hice (R-Walton) will be joining the Ted Cruz presidential campaign’s Georgia Leadership team.

Wisconsin Governor Scott Walker will make an appearance at Lovie’s Barbecue, 3420 Piedmont Road Northeast, Atlanta, GA 30305 in Buckhead for lunch on Saturday. Click here to sign up for free tickets.

The AJC has an interesting story on how this weekend’s Red State Gathering eclipsed the Iowa straw polls when momentum suddenly moved toward Atlanta.

This time, the key move was Wisconsin Gov. Scott Walker deciding he would rather go to Atlanta than Boone, Iowa. The Midwesterner is expected to compete hard in the Iowa caucuses, but the straw poll allowed only a few thousand people to drive huge media coverage and expectations-setting.

Once Walker decided not to participate, said Robinson of The Iowa Republican, the rest of the campaigns followed suit. The state party announced in June that the straw poll was canceled.

“It forces all the campaigns to push all their chips in the middle of the table in August,” Robinson said. “There’s a lot to risk and not a whole lot to gain. We’ve known that for years in Iowa. Now we have life without the straw poll, and it ain’t so bad.”

In the meantime, a SuperPAC backing Jeb Bush has been hoovering up the megabucks from Georgia.

Five wealthy Georgians put down six-figure donations toward their favorite presidential candidates, according to new disclosures from the unlimited-donation “super PACs” that have become requisite campaign accessories.

Like he did nationally, Bush set the pace in super PAC funding from Georgia by a wide margin, bringing in $2.84 million from Georgians in the first half of 2015. That is in addition to the $319,000 Georgians gave directly to Bush’s campaign, also tops among Republicans.

The big-money action was entirely on the Republican side of the ledger: Super PACs promoting Hillary Clinton and other Democrats running for president reported no donations from Georgia. Clinton’s campaign set the pace in Georgia by raising $600,000 from the state in its early months, but that sum can be offset by a single mega-donor check to a Super PAC.

The New York Times has a story about a letter written in 2001 from then-Governor Jeb Bush to his brother, President George W. Bush.

The message began with a cover letter, on his official governor’s stationary, from Jeb Bush, dated Aug. 30. “Dear George, ” it started. “Some people support that tax plan!”

Attached is a flier from a barbecue restaurant in Georgia, called Country’s. “Check this out,” Jeb Bush jotted across the top. The flier’s advertised special, deemed “Dubya’s Texas Specials,” that would taste “even better with the tax relief you’ll receive.”

Jeb Bush concluded with a note of regional family political humor. “Columbus, Ga., Bush Country.” It was an apparent reference to the location of the barbecue restaurant, in a Southern state that Mr. Bush had carried during his election in 2000.

Interestingly, that’s the same barbecue restaurant that is catering the Ted Cruz event in Columbus on Saturday.

On that topic, the Savannah event hosting Ted Cruz has picked up another headline host, Congressman Buddy Carter. 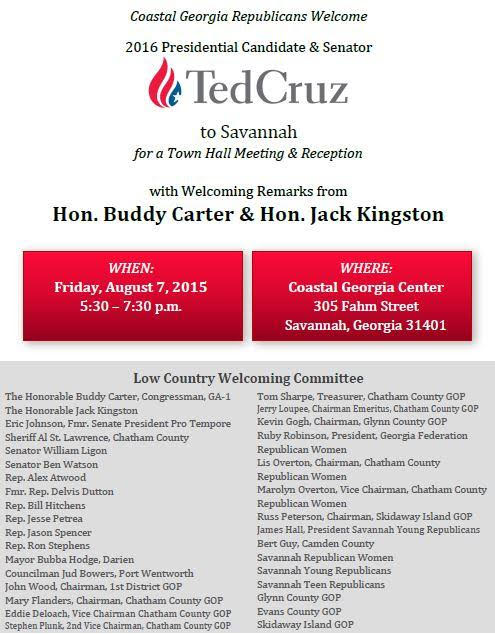 Two weeks ago, members of the DeKalb County Board of Commissioners voted to strip money intended to pay for a corruption investigation by former Georgia Attorney General Mike Bowers from the county’s mid-year budget.

The DeKalb County Board of Commissioners have opted to pull hundreds of thousands in funding for a special corruption investigation, a move board member Nancy Jester called a “delay tactic” to avoid scrutiny.

Before commissioners approved the county’s $1.3 billion mid-year budget Tuesday, they stripped out $500,000 for an ongoing probe into corruption allegations against county officials and staffers.

“The commissioners that are hemming and hawing on this are trying to keep disclosure at bay,” says Commissioner Jester, who opposed the move.

“To come around and say, ‘Oh but I have a question about this investigation because I’m such a great financial manager, and I’m so careful with taxpayer dollars,’ those things are not congruent,” Jester says.

The commission also stripped another $200,000 for the district attorney’s office to hire four people for his public integrity unit.

Yesterday, Bowers sent a letter to Lee May to update the DeKalb County iCEO on the status of the investigation commissioned by May into public corruption in DeKalb.

The DeKalb County government we have found is rotten to the core. The misconduct starts at the top and has infected nearly every department we have looked at.

While most folks have been helpful, some department heads have flatly ignored requests from you and your office to provide full documentation with regard to P-card records, including the transaction logs that are required to be kept at each work site. They have also ignored Open Records Act requests we have filed and today are in violation of state law…. By refusing to provide the needed records they are delaying the completion of this inquiry.

The extent of P-Card abuse and misuse is astounding.

Taxpayer funds were routinely used to buy liquor, catered meals, candy, popcorn and pretzels filled with peanut butter for elected officials, department heads and staff members. The county’s own internal auditors have reported this improper spending over the years. Yet the abuse has continued.

But the waste and fraud is not exclusive to P-cCards. For instance, several departments over the past five years have regularly overspent their budgets and no action has been taken to correct this illegal conduct.

Thefts of county property have been covered-up and mishandled.

And just in the last few days, we have found what appears to be a bribery scheme involving a major county department.

Lee May responded to serious allegations of theft, financial impropriety, and possible bribery by throwing the very investigators he hired under the bus in a press release.

“I wholeheartedly disagree with the opinion that DeKalb County is rotten to the core. The overwhelming majority of DeKalb County employees are honest, decent, hard-working, and committed to public service.

We were aware of the underlying issues mentioned in Mr. Bowers’ letter. That is why we hired him to conduct a comprehensive review of county government operations to identify corruption, fraud, criminal activity, conflicts of interest, or abuse; with a report in 120 days.

The 120 days has come and gone, and it appears the only thing we have to show for it is a 2-page letter full of salacious – but vague – innuendo.”

DeKalb County Commissioner Sharon Barnes Sutton doesn’t see the point of an investigation, according to the AJC.

“If any of those things are found to be true, of course I would be alarmed, no question about it,” she said. “I need to see what we’re getting for the money we’ve already been charged.”

Commissioner Nancy Jester (R-Dunwoody) spoke to 11Alive about the letter and corruption in DeKalb County.

“It’s a very disheartening letter to read,” said Commissioner Nancy Jester. Jester’s conclusion — the letter is on the right track, and the investigation is just what the county needs to clean up its act.

Jester said when the full report is complete, she’ll be ready to call for arrests and prosecutions, if necessary.

“If people have stolen from the taxpayer, they need to be held to account. If they’re an employee or if they’re an elected official, they have got to be prosecuted for that crime.”

Jester also spoke to Fox 5 Atlanta about the letter.

Commissioner Nancy [Jester] says “things are very bad in DeKalb County; this is not a perception problem. This is a real problem.”

Commissioner Jester says the findings are shocking. She says people need to be held accountable. “We need to hold people’s feet to the fire on this. Taxpayers are harmed and we won’t stop wasting money until we root out this corruption.

DeKalb County is a great county with amazing people. Among those are many good and dedicated public employees of the DeKalb County government who, everyday, work hard for the taxpayers with honor and professionalism.

It is both the taxpayers and these many honest employees of DeKalb County who are the victims of an out of control, corrupt DeKalb County government that is rotten to the core.

It does not serve the taxpayers nor employees of DeKalb County for elected officials to deliberately mischaracterize and misquote the initial update from the DeKalb County Special Investigators. Instead of living in denial and attempting to cover up the stunning reality we face at this point in the investigation, the Administration should – with all due haste – ensure the taxpayers and honest employees that those stealing taxpayer dollars will face the full force of the law.

Instead of criticizing the DeKalb County Special Investigators, the Administration should order every county employee to fully cooperate and make all information and documents available or face immediate termination.

As long as the Administration fails to send a clear and direct message that every employee will cooperate with the investigation, taxpayers and honest employees will continue to endure the consequences of the few who are acting outside the law.

It is unacceptable for some of my fellow Commissioners to both refuse to make their records and documents available and refuse to support this investigation while giving away millions of tax dollars for a soccer complex.  If there are millions for billionaires, there is money to expose waste, fraud, and abuse.

At the Press Conference earlier this week to announce that four members of the DeKalb County Commission voted to give $12 million to billionaire Arthur Blank’s Atlanta United FC, the four County Commissioners who voted for the taxpayer giveaway and iCEO Lee May were brought onstage wearing fancy scarves with the Atlanta United FC logo. Assuming they got to keep the scarves, that means at a taxpayer cost of $3 million each, those may be the most-expensive scarves ever. 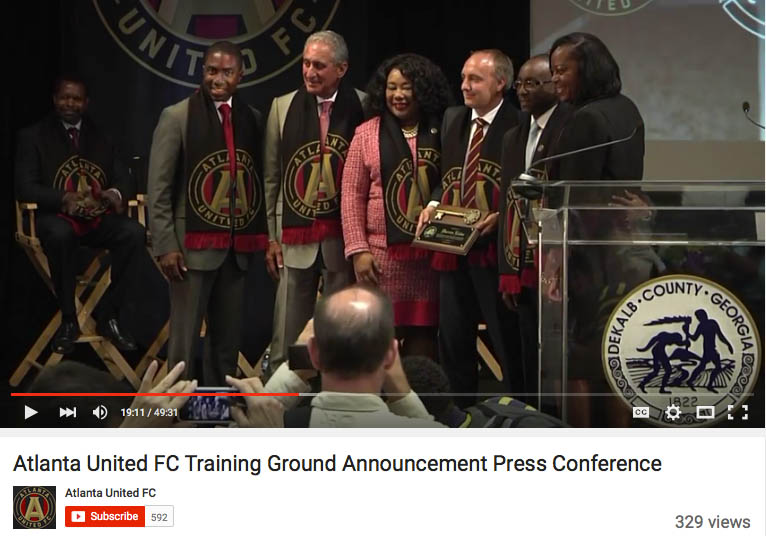 Here’s the vote count on the giveaway, from the AJC.