On August 4, 1753, George Washington became a Master Mason at the Masonic Lodge No. 4 in Fredericksburg, Virginia.

On August 4, 1958, a wagon train left Dahlonega, headed to Atlanta to deliver 43 ounces of gold to be used to coat the dome of the State Capitol. 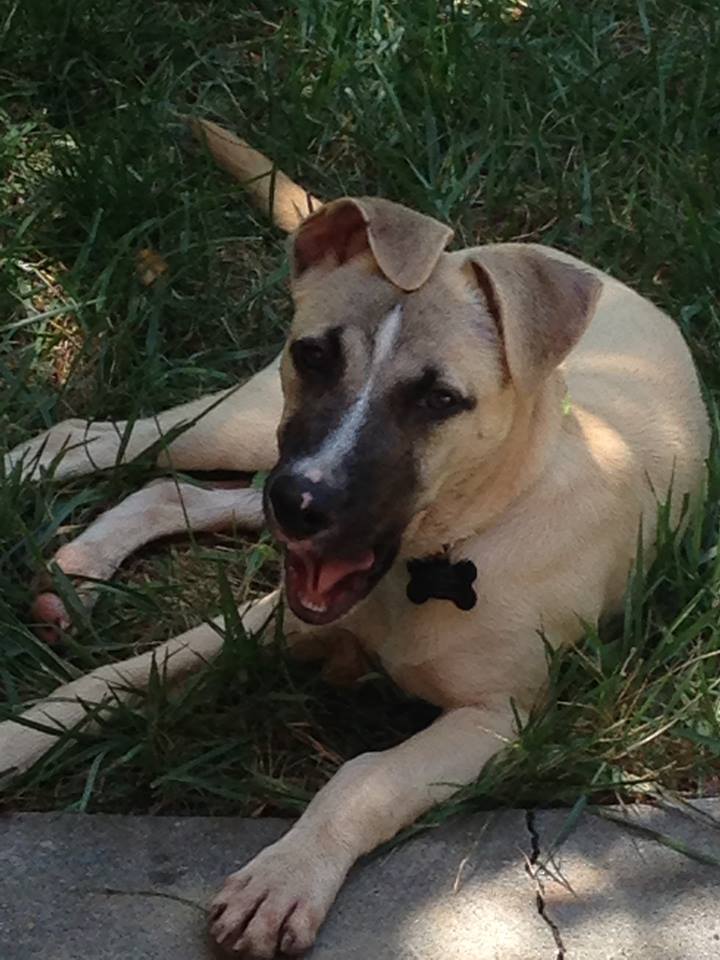 Meet Comet, the newest member of the J. Max Davis family, who was adopted after the family was going door-to-door and knocked on the door of someone who is active in dog rescue.

A scheduling conflict will prevent Gov. Nathan Deal from speaking to the Red State Gathering, which convenes this weekend in Atlanta, but if you want to see him tonight, he’ll be at a fundraiser for House District 80 candidate J. Max Davis in Brookhaven. 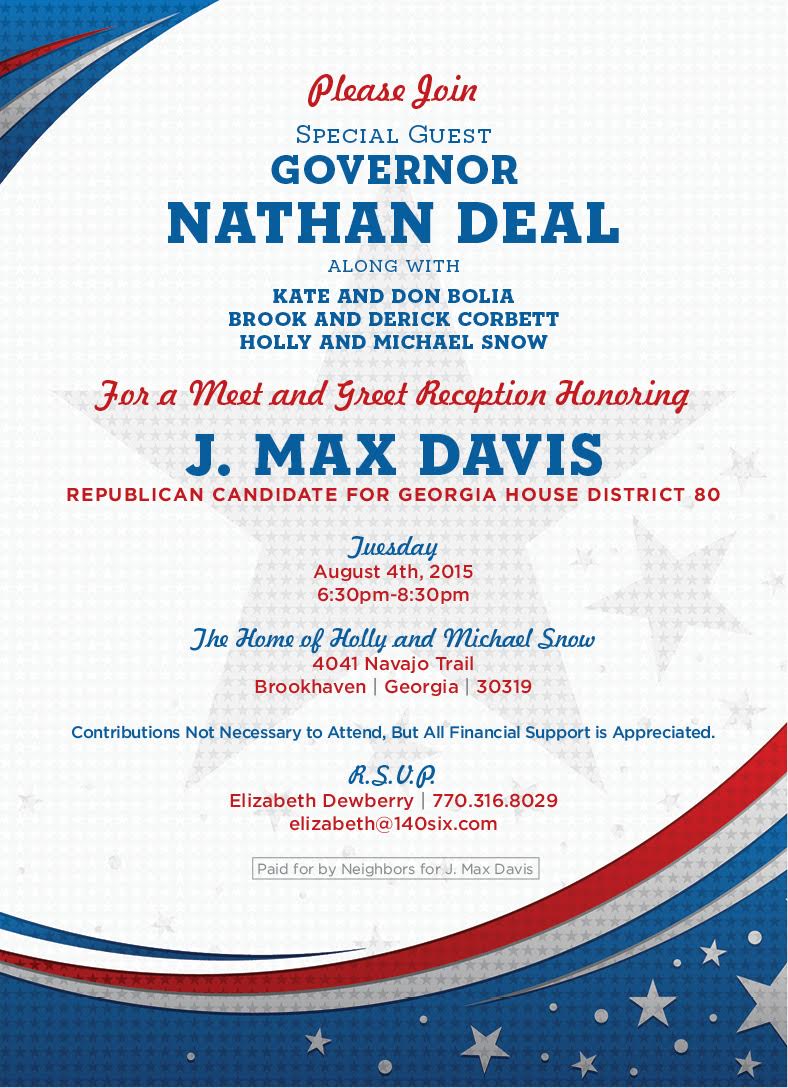 In Fayette County, the election to fill the seat of late County Commissioner Pota Coston will be held in a district, instead of at-large as the Commission previously decided.

A federal judge granted an injunction against Fayette County, requiring the county to use district voting to fill a vacant district seat created by the death of the county’s first black commissioner last month.

U.S. District judge Timothy C. Batten Sr. cited in his 36-page decision, the timing of the Sept. 15 special election and that Pota Coston was elected under district voting – a plan he ordered in 2013 – as his reasons for granting the preliminary injunction requested by the NAACP, which has been in three-year legal fight with Fayette over its electoral system.

The special-election dispute emerged when county officials said they had no choice but to use at-large voting for the Sept. 15 special election because local law requires at-large voting to be used for such elections. Batten’s 2013 ruling did not include provisions for which electoral process should be used for special elections. NAACP attorney Leah Arden contends district voting should be used to fill a district seat.

Early voting continues all week long in the House District 155 Special Runoff Election, according to the Tifton Gazette.

Voters in HD 155 will choose either Clay Pirkle of Turner County or Horace Hudgins of Irwin County to fill the unexpired term of Rep. Jay Roberts, who resigned due to his nomination to serve as planning director for the Georgia Department of Transportation.

As a reminder: any voter who is eligible may vote in a runoff election, even if they did not vote in the preceding election.

To check your voter registration status, you may use the Secretary of State’s My Voter Page.

Daniel Malloy of the AJC writes that Home Depot founder Bernie Marcus has written some big checks in support of two GOP candidates for President.

But Marcus, of Atlanta, is hedging his bets: He also gave a combined $600,000 to two PACs backing Wisconsin Gov. Scott Walker, “Unintimidated” and “Our American Renewal.”

Marcus does not appear to have changed his mind. His big Right to Rise donation was in January, while the Walker PAC gifts were in March and May, then he donated to Bush’s campaign in June.

The Washington Post places Senator Ted Cruz’s bus tour of Georgia and other Southern states in context, noting that Cruz referred to the South as a “firewall” in the GOP Presidential race.

Ted Cruz made the case Sunday that he can win the Republican nomination because of his strength in the South.

Cruz plans to spend a good chunk of the August recess traveling by bus around the South, including South Carolina, Georgia, Alabama, Tennessee, Mississippi, Arkansas, Oklahoma and Texas.

Several of these states will hold primaries on March 1 in a regional primary that has been dubbed the SEC Primary after the Southeastern Conference in college football. March 1 is the first date that non-early states are allowed to schedule their contests. A candidate who wins then might get momentum going into the winner-take-all contests that begin March 15.

“I view the SEC primary as a firewall,” Cruz confided to the audience.

Expectations are running highest in the South as candidates eye March 1, the date of the so-called SEC primary, when a host of often overlooked states in that region will vote on the same day.

“The move to an earlier primary has sparked interest by many of the candidates,” said Doyle Webb, the Arkansas GOP chairman. “We’ve had at least 10 of the announced candidates contact us directly for information [on how to file, the filing fee, the process]. We’re excited to see all the candidates, but we’ll wait and see who files in Arkansas.”

Added Tennessee GOP Chairman Ryan Haynes, “We anticipate that Tennessee is going to get a lot of attention…Tennessee is a relatively easy state to get on the ballot, and campaigns are starting the process much earlier than they have in prior presidential elections. They’re reaching out to the state party about what the process is, how to get the delegates lined up. The process seems to be starting much earlier this time than four years ago.”

The Republican Party of Virginia, which also chose to compete on March 1, has already disseminated detailed ballot information to all of the campaigns, said Chairman John C. Whitbeck, Jr., something that “reminded [campaigns] strongly to get started now on their work.”

Scott Walker hopes his conservative credentials will bolster his chances in Southern states.

That social conservatism will be popular with Republican voters in Tennessee and throughout the South, but most if not all GOP presidential contenders share Walker’s view on same-sex marriage.

It will be Walker’s work taking on unions in Wisconsin that will especially endear him to southern voters, argued a longtime Tennessee Republican operative.

“Gov. Walker is certainly a top-tier candidate as he has taken on the labor unions and won three times in the past four years in a light blue state,” said the operative, who requested anonymity to speak freely about the race.

“Because of these fights, he has created a national fundraising network and has a compelling narrative of taking on the unions to create a more business friendly climate in Wisconsin that should play well in southern right-to-work states like Tennessee and Georgia.”

MARTA reaches for your wallet

Everytime you buy something in Fulton or DeKalb County, you’re paying for MARTA, and on the basis of one or two years without debilitating financial instability, they’re reaching for our wallets to take out another $200 million. As a DeKalb County resident, I have to say no, thanks to their legislative proposal. MARTA is talking about taking the case to the General Assembly, but if the legislature decides to go along with this boondoggle, MARTA will have to make their case to the voters and pass a referendum before levying an additional half-cent sales tax that will last for the rest of my life. Here are a couple quotes from the AJC story.

MARTA board chairman Robbie Ashe discussed the project and the agency’s strategy:

“[W]e will go to the 2016 General Assembly (and) ask them to permit our member jurisdictions to ask their voters for an additional half-penny sales tax that would last the duration of MARTA’s existing penny (tax). That half-penny would go to finance these expansion projects. They would then roll (into) operations and maintenance once (the projects) are delivered.”

“We believe that the math on that (half-penny) leads us to about $8 billion worth of projects over the next several years. A half-penny in Fulton, DeKalb and Clayton is approximately $200 million a year. If it lasts the duration of our existing penny, we would be able to, conservatively speaking, without remotely taxing our credit card, get to $4 billion.

“Because it would last that 40 years, we get bonding capacity.

“The half-penny, if it lasts for the duration of MARTA’s existing penny (tax), would be a revenue stream and a local match that is virtually without peer anywhere in the United States. It makes us very confident that we could go to Washington and get the highest level of federal match.

Meanwhile, the State Road and Tollway Authority is reaching for their own checkbook, to spread the road-building dollars in the form of grants to local government.

The agency announced on Monday that it is accepting applications for transportation improvement grants and loans which will come from the Georgia Transportation Infrastructure Bank program. The program is entering its fourth round of grants with the goal of improving mobility in Georgia’s communities through road and bridge projects.

“Last year was a banner season for the GTIB program in that we received the most applications in the program’s history. This year, we anticipate a similar response all across Georgia as we have ramped up outreach efforts inside and outside of the Atlanta metro area,” SRTA Executive Director Christopher Tomlinson said in a statement.

“The program’s success is directly attributable to the support of Gov. Nathan Deal and the Georgia General Assembly who continue to approve additional funding in the state budget,” he added.