Wright had been the only colonial governor and Georgia the only colony to successfully implement the Stamp Act in 1765. As revolutionary fervor grew elsewhere in the colonies, Georgia remained the most loyal colony, declining to send delegates to the Continental Congress in 1774.

On July 11, 1804, Aaron Burr shot Alexander Hamilton in a duel in Weehawken, New Jersey. Burr was the sitting Vice President of the United States and Hamilton a former Secretary of the Treasury.

Millard Fillmore was sworn in as the 13th President of the United States on July 10, 1850, following the death of President Zachary Taylor.

On July 10, 1864, Conferderate forces retreated south across the Chattahoochee and burned the bridge behind them. General Sherman wrote later of the day,

General Garrard Moved rapidly on Roswell, and destroyed the factories which had supplied the rebel armies with cloth for years.

Over General Garrard was then ordered to secure the shallow ford at Roswell and hold it until he could be relieved by infantry, and as I contemplated transferring the Army of the Tennessee from the extreme right to the left, I ordered General Thomas to send a division of his infantry that was nearest up to Roswell to hold the ford until General McPherson could send up a corps from the neighborhood of Nickajack.

General Newton’s division was sent and held the ford until the arrival of General Dodge’s corps, which was soon followed by General McPherson’s whole army.

On July 11, 1877, a Constitutional Convention convened in the Kimball Opera House in Atlanta to replace the 1868 Reconstruction Constitution.

General Dwight D. Eisenhower was nominated for President by the Republican National Convention on July 11, 1952.

The Atlanta Committee for the Olympic Games broke ground for Atlanta Olympic Stadium on July 10, 1993; after the Olympics, the stadium was modified for baseball and became Turner Field.

“As evidenced by today’s announcement, Georgia’s film industry has had a significant impact on our state,” said Deal. “These statistics represent job creation, increased business opportunities and the revitalization of communities statewide, and I am committed to building a strong film-ready workforce in Georgia to ensure that the industry continues to flourish here.”

Providing a sustainable workforce to meet the needs of productions coming to Georgia is a priority for the state. Deal established the Georgia Film Academy earlier this year, bringing together the University System of Georgia, the Technical College System of Georgia and members of the film industry to collaborate. Working together, they established a program to provide students with degrees or certifications that fulfill industry needs and demands.

“Georgia is one of the fastest-growing entertainment production centers in the world with 42 productions currently filming across the state,” said Chris Carr, commissioner of the Georgia Department of Economic Development. “More than 100 new businesses have relocated or expanded in Georgia to support the industry – creating jobs for Georgians as well as economic opportunities for our communities and small businesses – ensuring Georgia’s place in the industry well into the future.”

The highly anticipated Georgia-lensed “Ant-Man,” set to premiere nationwide in theaters on July 17, made a major economic impact in Georgia during filming (October-December). “Ant-Man” employed 3,579 Georgians, spent more than $106 million in Georgia and utilized 22,413 hotel rooms during filming. In addition to filming at Pinewood Atlanta Studios, “Ant-Man” shot scenes in Atlanta including the state-owned Archives Building, Bank of America building and on Broad Street.

Cobb County Sheriff Neil Warren (R), who stood with Sen. Josh McKoon as a press conference earlier this week on immigration-related legislation, supports the creation of a national registry of people who entered the country illegally and committed other crimes.

Warren said he first met McKoon when the state senator was drafting the bill last year and asked for his input because the sheriff is known to be a big believer in protecting the U.S. borders and working with federal immigration authorities.

“About 25 or more years ago, I said, ‘Look, we need to do something that’s traditional from the mountains. We need to have a corn boilin’.’ I kept prescribing it to them, and we went over to Johnny Woodward’s horse barn and we boiled some corn,” Hutson said.

The event also served as a fundraiser for the Cobb County Youth Museum on Cheatham Hill Drive, which had lost funding from the county because of budget cuts, he added.

“I think over the years it’s just become a family tradition,” Warren said. “Shortly after the first year and holiday season, we started getting a lot of calls about (it). It’s just turned into a great event for the citizens. Republicans, Democrats, people with no political affiliation — it’s just one big family. What’s so great about is not only we get to see old friends and get new friends every year, but the best part about it is we’re raising a little bit of money for the museum.”

The Rome News-Tribune takes a look a lobbyist spending on local legislators.

The Floyd County Commission is considering removing the exemption of the excise tax on electricity used in manufacturing and raising the millage rate.

The Floyd County Board of Education will consider ethics complaints against the county superintendent and two employees.

The City of Bainbridge has raised the millage rate by .14 mills.

The Bainbridge Post-Searchlight takes a look at the effect of the $5 per night hotel/motel fee on local establishments.

Andy Patel of Glen Oaks Motel on Tallahassee Highway said it could result in a loss in profit for his business.

“Independent people and poor people on the road, they hurt because of stuff like that,” Patel said. “If people stay seven days they have to pay extra $35. With that money they can have one more night.”

Senator Dean Burke said he believed those who proposed that part of the bill were looking for sources of revenue that would have the least ill effect on the economy.

“Nobody likes an increase in any sort of fee or tax, but the bottom line though is the roads are deteriorating way faster than the Department of Transportation could repair,” Burke said. “I was told of 150 bridges in my district that are in need of repair. You start thinking about school buses going over country business and what can happen.”

Seven Muscogee County schools are among the nearly 250 identified by the Georgia Department of Education as the worst-performing in the state.

The Mexican Consulate in Atlanta will visit Valdosta later this month.

Macon-Bibb County elected leaders joined the chorus against parts of the fireworks legalization bill that passed the Georgia General Assembly this year.

County leaders said they were bothered about the law that permits fireworks to be fired up to midnight on weekdays and till 2 a.m. on the weekend.

The new law, which allows for more high-powered fireworks in Georgia, could be revisited in the state Legislature, one state leader said.

Commissioner Mallory Jones said he doesn’t know what legislators were thinking by allowing fireworks to be shot that late at night.

“I think that’s insanity,” he said at the July 7 commission meeting.

State Rep. Allen Peake’s Facebook page was littered with complaints about fireworks over the weekend. The posts ranged from dogs being unnerved to a mother saying her epileptic child had seizures because of the noise.

Peake thinks the law could get a second look during the next legislative session, which begins in January.

“In particular, possibly allowing local ordinances to determine when the cutoff time is,” he said in an email.

For those who are overjoyed or distraught by the lead some polls are showing for Donald Trump in the Republican Presidential Primary, let’s take a look at what the polling looked like in 2012. Here’s a slide from the presentation I gave at the Gwinnett County Republican Party meeting last night. The information was compiled from polls listed at Real Clear Politics. 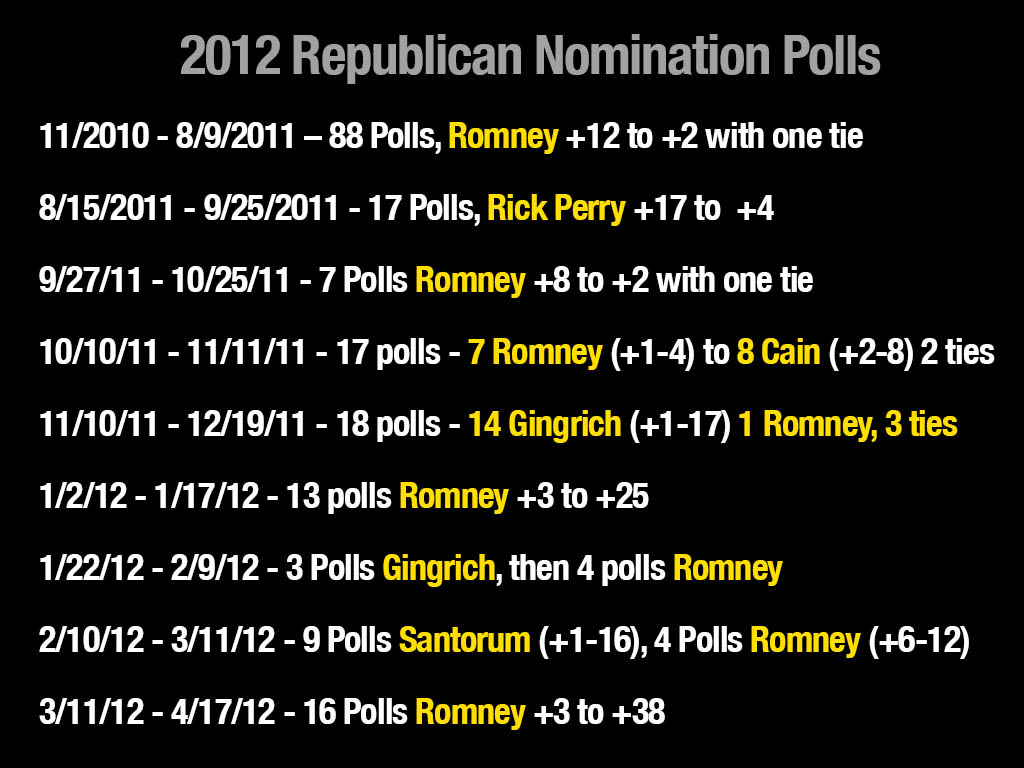 Someone asked me on Facebook if the lesson I derive from this is that Jeb Bush, whom some consider the Mitt Romney of 2016, is the inevitable Republican nominee. I answered no, the lesson is that there will likely be several “Flavor of the Month” candidates who show some strength for a period before fading away. I don’t know if this will be the case with Trump. But I do know that polls more than a year out have little predictive value.