The Virginia Convention adopted George Mason’s “Declaration of Rights” on June 12, 1776. From Wikipedia:

The Declaration was adopted unanimously by the Fifth Virginia Convention at Williamsburg, Virginia on June 12, 1776 as a separate document from theConstitution of Virginia which was later adopted on June 29, 1776.[2] In 1830, the Declaration of Rights was incorporated within the Virginia State Constitution as Article I, but even before that Virginia’s Declaration of Rights stated that it was ‘”the basis and foundation of government” in Virginia.[3] A slightly updated version may still be seen in Virginia’s Constitution, making it legally in effect to this day.

It was initially drafted by George Mason circa May 20, 1776; James Madison assisted him with the section on religious freedom.

The Virginia Declaration of Rights heavily influenced later documents. Thomas Jefferson is thought to have drawn on it when he drafted the United States Declaration of Independence in the same month (June 1776). James Madison was also influenced by the Declaration while drafting the Bill of Rights (introduced September 1789, ratified 1791), as was the Marquis de Lafayette in voting the French Revolution‘s Declaration of the Rights of Man and of the Citizen (1789).

The importance of the Virginia Declaration of Rights is that it was the first constitutional protection of individual rights, rather than protecting only members of Parliament or consisting of simple laws that can be changed as easily as passed.

On June 12, 1987, President Ronald Reagan spoke in then-divided Berlin and challenged Soviet leader Mikhail Gorbachev to “tear down this wall.”

[If that excerpt is not enough for you, here’s a link to the entire speech.]

Carol Hunstein, appointed by Governor Zell Miller to the Georgia Supreme Court, was elected Chief Justice by her peers on June 12, 2009. 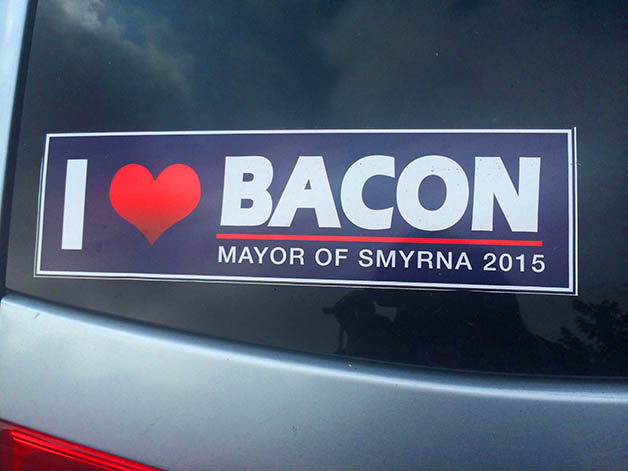 +1 to Smyrna Mayor Max Bacon for his bumpersticker.

Today is the last day of early voting in House District 55 (Fulton) and House District 24 (Forsyth). The Special Elections will be held Tuesday, June 16, 2015 from 7 AM to 7 PM.

In Forsyth County, early voting is open today from 8 AM to 7 PM at the following locations:

Thanks to Fulton County Judge Kimberly Esmond, the candidacy of Tyrone Brooks, Jr. to succeed his father in that office is back on, as the order by Secretary of State Brian Kemp disqualifying Brooks was stayed yesterday.

“As Georgia’s population and its economy continue to grow, we must adapt to meet the needs of a vibrant state,” Deal said. “While an expansion of the Savannah Harbor means jobs for Georgians and a boost to our economy, it will also mean an increase in commercial vehicle traffic. The safety of our drivers and the effective transportation of goods are of critical importance. This investment is a significant step forward in meeting these goals.”

There are currently 234 commercial vehicle enforcement officers serving in 10 regions. The additional officers will patrol areas identified by the Department of Public Safety as “high crash corridors.” These areas include I-16 and I-95, as well as the Atlanta metro area, and the area south of Atlanta along I-85.

Meanwhile, Tybee Island is working toward being able to police the only bridge connecting them to the mainland.

The Tybee Island City Council approved an intergovernmental agreement and memorandum of understanding that would authorize Tybee police to assist with evacuations, respond to accidents or otherwise handle emergencies outside city limits — specifically on U.S. 80 between the Lazaretto Creek Bridge and the Bull River Bridge.

The Chatham County Commission still has to OK the agreement.

According to the agreement, Tybee Island police already have the authority as sworn law enforcement officers to issue citations or criminal charges related to motor vehicles outside of city limits. But Mayor Jason Buelterman stressed at a meeting of the city’s public safety committee Thursday morning the over-arching goal of the document is to improve response to traffic when the agency in charge of the area, the Savannah-Chatham police department, can’t make it fast enough.

“My goal initially was just to get our police … the ability to get out there and clean up accidents and traffic,” he said. “I think long term … it wouldn’t be anything where we would be necessarily taking it over. It would just be we have the right to go out there and do what we can.”

Savannah City Council will consider zoning and animal control changes that would allow beekeeping and chickens inside the city limits.

Zoning regulations currently allow livestock in limited areas of the city. Meanwhile, the Animal Control Ordinance seems to sanction backyard animals, specifying limits on critters as disparate as cows and hamsters. By ordinance, residents may keep five of each of those species as long as they’re 100 feet from a neighbor’s house.

As proposed, the revised ordinance and zoning regulations would allow one chicken for every 1,000 square feet of high ground on a residential lot, with a maximum of 30. Noisy roosters are more limited than hens: Residents need a 2-acre lot plus a 250-foot setback from the nearest neighbor’s house to keep these birds. About 1,700 lots in Savannah are big enough.

Beekeeping would be allowed with some restrictions, including a required registration and a limited number of colonies based on lot size. For example, lots of a quarter acre or less would be limited to two colonies. In the event of a concern from a neighbor — for example, a mother with a child allergic to bees — an animal control officer can deem a hive unacceptable even if it meets all the stated criteria.

Formed Tuesday, the ad hoc committee is led by Mayor Pro Tem Bert Bivins and includes Commissioners Larry Schlesinger, Virgil Watkins and Mallory Jones. The committee was created to work with the Reichert administration to map out how Macon-Bibb will spend $14 million in bond funds to fight residential blight.

Thursday’s meeting was designed to bring the committee up to speed about blight progress so far and to decide the next course of action. The committee authorized Assistant County Manager Charles Coney to issue a request for qualifications for a blight consultant. Schlesinger referred to the position as a “blight czar.”

Because the federal system of czars has worked out so well.

Columbus Mayor Teresa Tomlinson held the first of a series of public meetings to urge citizens to vote for higher property taxes. You can imagine how that went over.

One resident who did not give her name said she would fight the mayor’s proposal because the freeze protects the elderly and those on fixed incomes. “Good luck passing it, because I’m going to work against it,” the woman said. Tomlinson responded that the freeze only helps those groups as long as they stay in their house. But if one spouse is widowed or when children grow up and move, the homeowners might want to downsize.

Stockbridge City Council voted to call off the investigation into Council Member Robin Buschman, who was accused of violating the city charter.

In Forest Park, the City Council asked the City Attorney to investigate Mayor David Lockhart’s veto of a council vote to adopt the city budget.

Not content with the upcoming $5 per night Hotel/Motel tax imposed by the State, the Stockbridge City Council voted to increase the local hotel/motel tax from 5 percent to 8 percent effective August 1st.

The DDA board approved a letter that “fully supports” the Augusta Coliseum Authority “vision” that would replace the James Brown Arena on the corner of Seventh and Fenwick streets with a new 10,000-seat facility, which would remain in the “downtown footprint.”

“The James Brown Arena has played a pivotal role in the ongoing revitalization of downtown,” said the letter, drafted by DDA Chairman Cameron Nixon. “In the past six years with Global Spectrum at the helm, sold-out shows have promoted our urban center and have strengthened downtown commerce.”

Augusta Mayor Hardie Davis has spent about half his office budget, with half the fiscal year past, but he’s asking for more money, according to the Augusta Chronicle.

With less than three weeks until the midpoint of Augusta’s fiscal year, Davis has spent about 46 percent of the $305,710 included for mayor’s office staff and other expenses in the 2015 budget, according to city finance department records.

“We knew that going into this process that we were underbudgeted and were just going to make it through the year,” said Davis, who said he has turned to “other resources,” including grants, internships and paid invitations to fund operations.

“We’re being as creative as we can be just to kind of limp along,” Davis said, including using two new Georgia Regents University “Mayor’s Fellows,” but “we can’t continue to operate the mayor’s office with unpaid, part-time student staffing.”

Before taking office in January, Davis asked that the commission double or otherwise increase the size of his office’s budget, saying he needs additional staff to accomplish his goals.

Cobb County may become a battleground over same-sex marriage after an expected Supreme Court ruling.

“It is essential for communities wanting economic growth to be open and accepting of all. If this should pass, Cobb embracing citizens and business owners regardless of their orientation will prove we are ready to be the gold standard community for the next generation,” Mathis said.

“To say that this fight will go away because of the court’s decision — if they do make a decision to overturn (Georgia’s ban on same-sex marriage) — is very naive. This debate will continue for years to come because family is always there, and it will not stop. A court cannot stop family,” [Robert] Potts said.

Swint said marriage is such a fundamental part of society that it will be argued for decades to come, similar to how the decision to allow abortion across the country in Roe v. Wade is still debated today.

“This particular case is going to be sensitive to cultural conservatives and those who are interested in cultural issues. The thing is I don’t know that there’s a whole lot they could do about a Supreme Court ruling. Their hands may be tied, at least in the short term,” Swint said.