On June 11, 1776, the Continental Congress appointed Thomas Jefferson of Virginia, John Adams of Massachusetts, Benjamin Franklin of Pennsylvania, Roger Sherman of Connecticut and Robert R. Livingston of New York to draft a declaration of independence from Britain. Language in the original draft that condemned the introduction of the slave trade in the colonies did not make the final draft.

Abraham Baldwin, founder of the University of Georgia, arrived in Philadelphia on June 11, 1787 to attend the Constitutional Convention. Baldwin was joined by three other delegates, William Few Jr., William Houston, and William Pierce; Baldwin and Few would sign the Constitution on behalf of Georgia.

On June 11, 1963, President John F. Kennedy issued proclamation 3542 ordering Governor George Wallace of Alabama to allow two African-American students to register at the University of Alabama, as ordered by a federal court.

On the morning of June 11, the day the students were expected to register, Wallace stood in front of the University of Alabama campus auditorium flanked by Alabama state troopers while cameras flashed and recorders from the press corps whirred. Kennedy, at the White House, and Deputy Attorney General Nicholas Katzenbach, in Tuscaloosa, kept in touch by phone.

When Wallace refused to let the students enter for registration, Katzenbach phoned Kennedy. Kennedy upped the pressure on Wallace, immediately issuing Presidential Proclamation 3542, which ordered the governor to comply, and authorizing the secretary of defense to call up the Alabama National Guard with Executive Order 11111.

That afternoon, Katzenbach returned with the students and asked Wallace to step aside. Wallace, knowing he was beaten, relented, having saved face with his hard-line, anti-segregation constituency.

[T]he most memorable performer may have been an automobile: the 1961 Ferrari 250 GT California, a custom-built car revered by auto collectors.

According to Motor Trend, the first Ferrari 250 GT Spyder California—colloquially known as the “Cal Spyder”—was produced in 1957 and the last was built in early 1963. In addition to the long-wheelbase (LWB) Spyder, Ferrari also produced a sportier, short-wheelbase (SWB) model. Though estimates vary as to exactly how many were made—Cameron says “less than a hundred” in the film—approximately 46 LWB and between 50 and 57 SWB Spyders were produced in all. For “Ferris Bueller’s Day Off,” the filmmakers used a modified MGB roadster with a fiberglass body as a stand-in for the Ferrari. The filmmakers reportedly received angry letters from car enthusiasts who believed that a real Ferrari had been damaged.

One 1961 250 GT SWB Spyder California, with chassis number GT 2377GT, belonged to the actor James Coburn (“The Magnificent Seven”), who died in 2002. On May 18, 2008, at the second annual Ferrari Leggenda e Passione event at Maranello, Italy, the British deejay Chris Evans bought that car at auction for 6.4 million Euros, or $10,894,400 (including fees), the highest price ever paid for an automobile at auction. 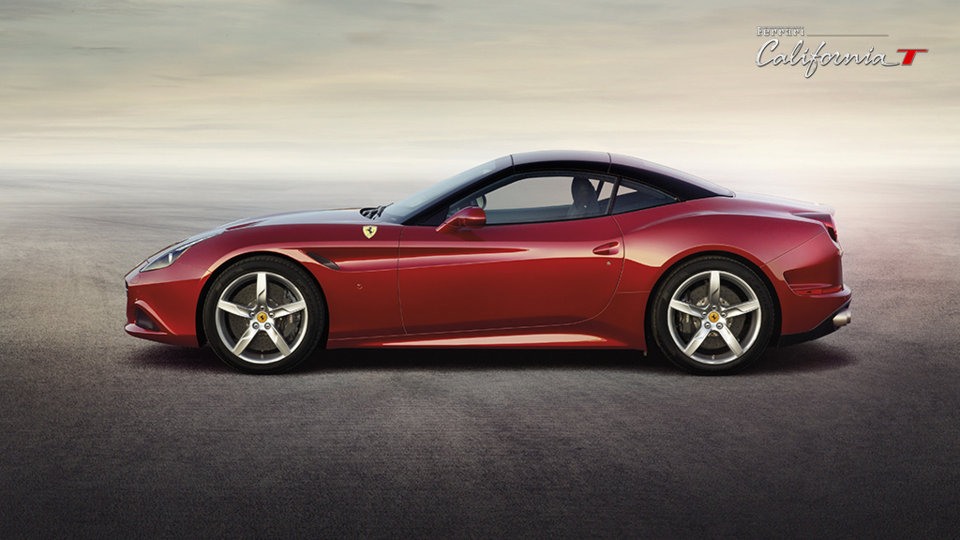 Today’s Ferrari California T is a convertible with a retractable hardtop that stickers for just under $200,000 before you start optioning it. But here’s a pro-tip: if you’re in the market, you’ll save a bundle with a pre-owned at Ferrari Maserati of Atlanta – almost any Ferrari you’ll see for sale is going to be low-mileage, and you’ll want it to visit a dealer before purchase as repair costs are a little pricy.

Christian Coomer, R-Cartersville, was named chairman of the House Transportation Committee, replacing Jay Roberts, R-Ocilla, whom the governor recently appointed as planning director for the Department of Transportation.

United States Senator Johnny Isakson (R) announced yesterday that he was diagnosed with Parkinson’s disease in August 2013 and will continue his service in the Senate and his reelection campaign for 2016.

“Parkinson’s you have two choices: You can let it control you, or you can control it. And I’ve chosen to take control of it,” the 70-year-old Isakson said in a well-orchestrated Washington session with reporters. Local reporters were connected via a conference call.

Anybody that follows me around for a week in Washington will recognize it’s not a debilitating situation. It’s a matter of me being in charge and I’m in charge. And to that end I’ve been all over the country in the last seven months since I’ve announced for re-election and I’m leaving this weekend to go to Williamsburg, Va., for an event and had a big one Monday in Atlanta at the Capital City Club and continue to pursue the election in 2016. I’m looking forward to re-election, looking forward to whatever challenge comes about and I’m tanned, rested and ready as Richard Nixon used to say.”

“In the 35 years that I’ve known Johnny Isakson, he has risen to meet — and overcome — every obstacle he’s encountered with determination and a smile on his face,” Deal said. “There’s not a doubt in my mind that he and Dianne will rise to meet this challenge. As he fights this battle, our distinguished senator will continue representing Georgians’ conservative principles in Washington.”

“Senator Johnny Isakson is a true statesman. When he speaks, people in Washington listen. Anyone who knows Johnny, knows that his top priority is and will always be the people of Georgia. He is a long-time champion for our veterans and Georgia values in the U.S. Senate. As my senior senator, I look forward to working together every day as we fight for Georgia and our country.”

Isakson’s physician chimed in, too.

Holmes said he has concluded that Isakson is “in stage 1.5 of 5 accepted stages of Parkinson’s disease….indicative of his mild symptoms.”

To learn more about Parkinson’s Disease, one place to start is the Mayo Clinic’s website.

Michael Kinsley wrote a first-person account of his experience after being diagnosed with Parkinson’s disease 20 years ago.

Twenty years ago, I received a diagnosis of Parkinson’s disease. I was forty-three. (Michael J. Fox, since you ask, was only thirty when he got the bad news.) After several weeks of quietly freaking out, it occurred to me to wonder whether it would affect my brain. I already knew that this was not the right question. Parkinson’s is completely a brain disease, unlike, say, multiple sclerosis, which causes more widespread damage. But I knew what I meant and you know what I mean. Would it affect my ability to think? I already knew the answer to that one, too, really. One of the tricks many people learn is that, if you’re stuck in a chair and can’t get up, you imagine yourself getting out of the chair, and then usually you can do it. So I knew that thinking was involved. I asked my neurologist at the time, and he answered carefully, “Well, after a few years you may lose your edge.” Lose my edge? Lose my edge? Oh, shit! I need my edge. My edge is how I make a living. More than that: My edge is my claim on the world. It’s why people are my friends, why they invite me over for dinner, perhaps why they marry me. What am I worth to the world if I’ve lost my edge?

Gradually, I calmed down. My physical symptoms seemed to be advancing quite slowly. Even after twenty years, if I take my meds I can seem almost symptom-free for most of the day. Sometimes I imagine that I feel my edge dulling, but usually I feel—ominously like those people in the comic book—that nothing has changed. Recently, a standard-issue baby-boomer bad back has been more burdensome to me than Parkinson’s. You’d think that if you’ve been assigned a major health issue you’d get a pass on the minor ones. But it doesn’t work that way.

In 1995, United States Senator Claiborne Pell (D-NY) revealed his Parkinson’s diagnosis at the age of 76. He later decided not to run for reelection in 1996. Sen. Pell lived until January 1, 2009.

To learn how you can help people living with Parkinson’s or to seek help for a friend or family member, you may start at the Georgia Parkinson’s Association or the American Parkinson Disease Georgia Chapter.

During this period, Isakson has remained active, and is credited with a breakthrough in negotiations over chicken exports.

A breakthrough in negotiations with South Africa is expected to lead to $65 million in renewed exports of chicken leg quarters due to congressional pressure.

The president of the USA Poultry & Egg Export Council based in Stone Mountain, James Sumner, gave much of the credit Wednesday to Sen. Johnny Isakson, R-Ga., saying that Georgia benefits considerably from the development as the country’s No. 1 poultry-producing state.

“His involvement was really critical in all of this coming about,” Sumner said.

For Isakson, the breakthrough is also welcome news.

“It’s the biggest thing I’ve been a part of in my political career in terms of economic benefit,” he said. “…I’m just as excited as I can be.”

He said he’s been working on this issue for three years, including a trip with Coons to South Africa. His seats on the Senate Finance and the Senate Foreign Relations committees provided the chance to add the chicken provision to the preference agreement when it came up for renewal.

“Within a week of passing the bill, they agreed to meet,” Isakson said of the South Africans.

Speaking of chickens, State Rep. Emory Dunahoo is welcoming some new constituents to his district, according to the Gainesville Times.

The redrawing of two state House districts in Hall County could create a perception that boundaries are being manipulated for gain, but elected officials deny this.

“All I gained, basically, was chickens and cattle …” said Rep. Emory Dunahoo, a Gainesville Republican who serves as the District 30 representative in the Georgia legislature.

The changes are being made to bring a farm property Dunahoo’s family owns within his district, he said.

Dunahoo said the district changes amount to a land swap.

[State Rep. Lee] Hawkins said it could impact upward of a couple thousand residents in East Hall, and that he tried to ensure that as few voters as possible were affected by the changes to keep the constituent base for each district mostly intact.

But Hawkins’s district would only gain an additional three dozen or so voters with the changes, Dunahoo said.

Albany Mayor Dorothy Hubbard has kicked-off her reelection campaign, according to the Albany Herald.

In a room full of supporters at the Albany Area Arts Council on North Jackson Street, Albany Mayor Dorothy Hubbard officially kicked off her re-election campaign on Wednesday afternoon.

If she is re-elected, Hubbard said the next four years will be about building on what was set in motion the prior four years. This includes the Mayor’s Call to Service that encouraged cleanup efforts, working with the Albany-Dougherty Economic Development Commission to make sure businesses can bring jobs to the city.

“Albany, Ga., is a world-class, dynamic city where people of all ages, all races and nationalities, rich and poor, live together … In this vibrant city, progressive city, we will love our neighbors as ourselves. We will work together to move our community forward,” Hubbard said. “That has been my dream and still is my dream.

The mayor described herself as a cheerleader for the city, specifically for the collaboration of leaders for Albany’s betterment.