On June 2, 1774, Britain’s Parliament passed the Quartering Act, the last of the Coercive Acts, meant to punish the American colonies and reassert British control. Eventually, the Third Amendment to the United States Constitution would prohibit the forcible quartering of soldiers in private homes.

Confederate General Edmund Kirby Smith, commanding forces west of the Mississippi, surrendered on June 2, 1865, and this date is generally considered the end of the Civil War. 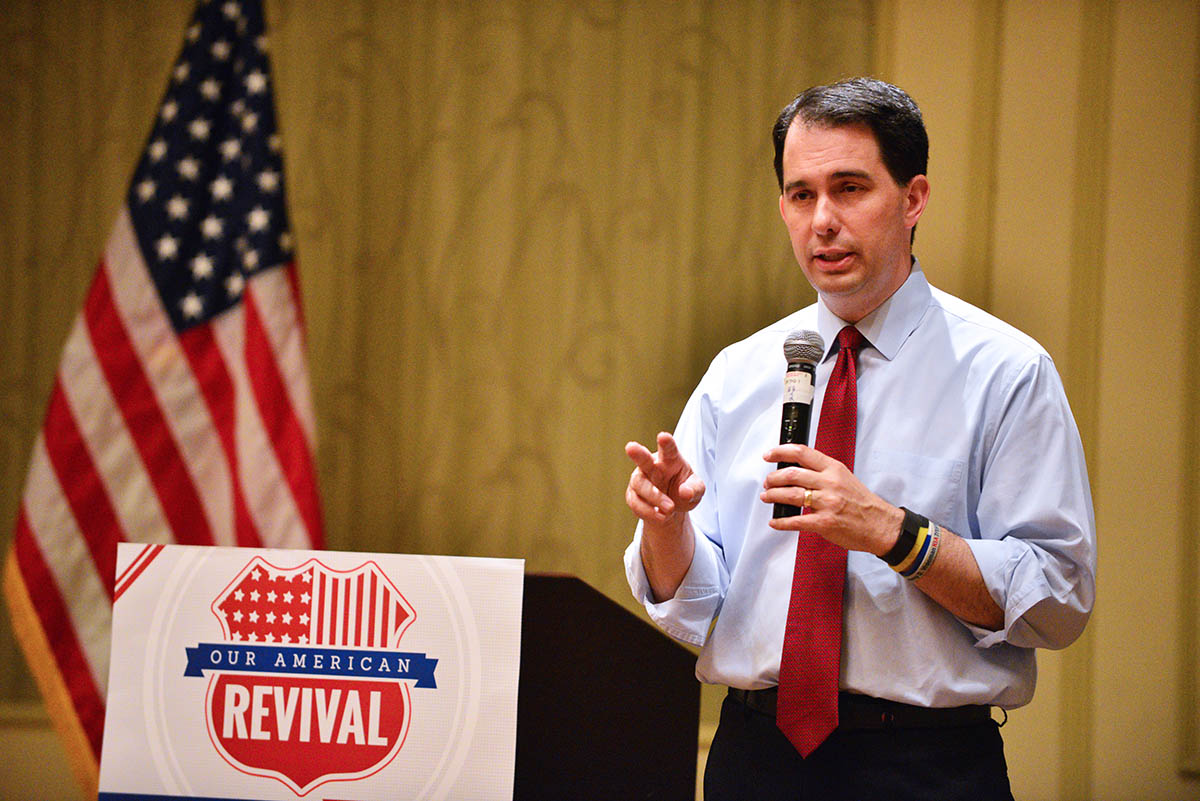 Yesterday, Wisconsin Governor Scott Walker appeared before a cheering crowd of between 150 and 200 Republican activists to discuss what many in the room hope will be a Presidential campaign.

Walker covered the issue of when an announcement would be forthcoming, saying that his state’s budget year ends at the end of the month and any announcement of a Presidential campaign would come after he signs the new year’s budget.

Kyle Wingfield of the AJC spoke to Walker after his address to the group and posing for individual photos.

“The common denominator from Iowa, New Hampshire, South Carolina, and here today, and elsewhere,” Walker said, is that “people come out and they know what we did to take on the big-government special interests a few years ago. They like that we didn’t just fight but we won those battles — not just then, but we’ve consistently won since.”

Walker indicated that track record of winning, both in elections and once in office, sets him apart from others in the GOP’s still-growing 2016 field.

In what ways, I asked, does Walker think those fights in Wisconsin would have prepared him for what he’d face in Washington if elected?

“You’ve got to act quickly,” he began. “You’ve got to use your honeymoon period. You’ve got to be bold and start working in the campaign and then really work in between the election date and the time that the legislative session starts … and put an agenda out there. To me, I believe in full-scale reforms, so (that means) a major transfer of power and money from the federal government to the states.

Lori Geary of WSB-TV spent some time talking to Gov. Walker, but the nature of television news is that in a 2-minute segment, he’s onscreen speaking for only 30-40 seconds.

I was lucky to have the chance to talk to Gov. Walker yesterday in a wide-ranging interview. Here’s the first clip, in which I asked about how the SEC Primary and the front-loading of Southern primaries to March 1 will affect the Presidential Primary.

“I’m glad to be here, and if I were to get in, certainly I’d compete. I think we can compete in any state in the country.”

“I think when people look at our record, there’s two kinds of candidates either in or emerging in the field right now.”

“There are fighters, a lot of people in the U.S. Senate who fight, who’ve been great carriers of the banner, but have yet to win anything in Washington. There’s another group of great winners, of Governors and former Governors who have won election and reelection, but have never really fought for big things. I think we’re unique in the sense that we’ve done both.”

“We’ve fought the good fights and we’ve won them time and time again on the issues that matter, not just in the ballot box, but on conservative reforms.”

“I’ve just taken on the unions, we’ve defunded Planned Parenthood, passed Pro-Life legislation, concealed carry and castle doctrine, Right to Work, I signed a law, 25th state in the Union, photo ID to vote, I mean you get a conservative list of the top things that people want accomplished in America, and we’ve done it in a state that has more Democrats than Republicans, so I think if I was to run and be in a state like Georgia or others in that SEC Primary if you will, I think we do very well.”

“I am a full-spectrum conservative from economic to fiscal to social and I think people would appreciate that regardless of where we come from in the country.”

And just for fun, here’s Scott Walker talking about a previous trip to Atlanta and, of course, Waffle House.

Then he went out for some Zaxby’s. 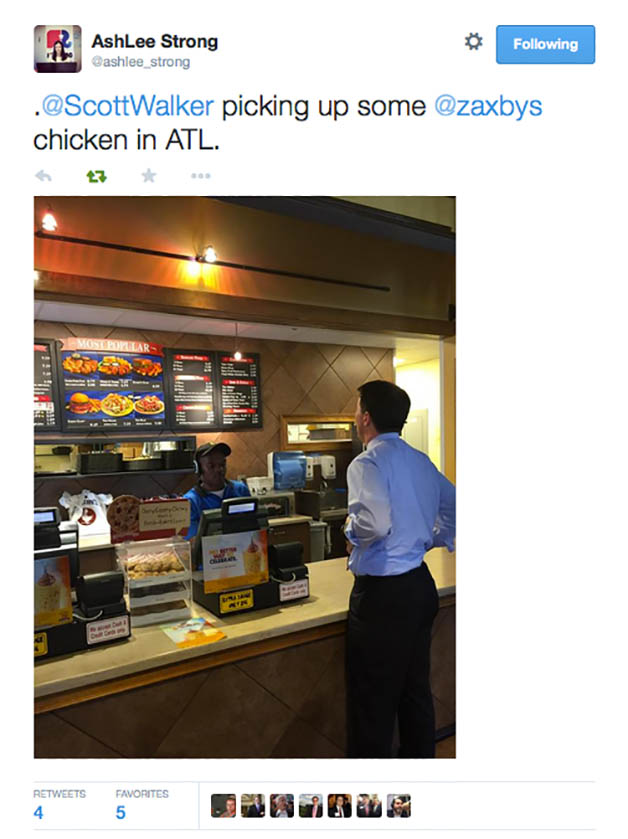 House District 80 became even more interesting yesterday as Republican Loren Collins entered the race out of nowhere. From the Brookhaven Reporter,

Lawyer Loren Collins, a Republican, filed to run for the post that had been held by former Rep. Mike Jacobs (R-Brookhaven), according to the Secretary of State’s website. Jacobs resigned the seat last month after he was appointed to a judgeship.

Collins said on his webpage that he ran unsuccessfully as a write-in candidate in the state’s Fourth Congressional District in 2006 and 2008. “It was during these elections that Loren first identified himself as a Bull Moose candidate, a practice he has carried over to this election so as to reflect his fiscally conservative yet socially libertarian politics that don’t neatly fit into today’s Republican or Democratic parties,” his website says.

At least three other candidates, including Brookhaven Mayor J. Max Davis, have announced plans to run in the July 14 special election for the post.

Speaking of Mike Jacobs, we learned from Brookhaven Mayor J. Max Davis via Twitter that Jacobs will be sworn in as a DeKalb County State Court Judge on Thursday at 4 PM in the House Chamber of the State Capitol.

Yesterday, Republican Dave McCleary announced that he will run for Geisinger’s seat.

“I believe that we are all called to a purpose. For me, my passion is helping others. Whether through being involved in the Roswell Rotary Club’s Roswell Memorial Day Committee or taking WWII veterans on Honor Air trips to DC or working to end human trafficking and advocating for anti-bullying and anti-human trafficking legislation to protect our children, there is no greater way in making a difference than through serving others,” said McCleary.

In addition to creating a legacy of civic leadership and successfully advocating for legislation, Dave is a committed conservative who has worked to elect principled, Conservative candidates to all levels of office. Dave is proud to be an early graduate of the Coverdell Leadership Institute, now known as Republican Leadership Georgia. “I have worked hard on many campaigns serving as State Co-Chair for Herman Cain’s Presidential campaign; Fulton County Co-Chair of Senator David Perdue’s campaign; 6th District Co-Chair for Senator Johnny Isakson’s 2004 and 2010 Campaigns; Fulton County Co-Chair for Congressman Tom Price’s 2006 campaign; and Co-Chair of Harry Geisinger’s grassroots campaigns since 2004. I greatly respected Harry and his work ethic. I am glad to have called him friend and mentor. It would be a real honor to serve and work hard for the people of my community, District 48,” said McCleary.

McCleary’s entry into the race makes it a real contest. In addition to the two Republicans, Democrat Jimmy Johnson qualified for the Special Election to be held July 14, 2015.

State House District 155 has become a three-way race, with the previously announced Republican Scott Downing of Fitzgerald, as well as Horace Hudgins of Ocilla and Sherry Miley of Tifton, both of whom listed themselves as Republican-affiliated.

In what sounds an awful lot like what Governor Nathan Deal has been saying about Criminal Justice Reform in Georgia, USDOJ #2 Sally Yates, formerly US Attorney for the Northern District of Georgia, is talking about the fiscal downside of long-term incarceration of nonviolent offenders.

“I’ve been at this for 27 years now,” Yates says. “I believe that it’s really imperative that we do everything we can to keep our communities as safe as possible, but to do that in a way that is just and fair.”

The federal government spends $7 billion a year to incarcerate about 200,000 inmates. She says that money could pay for more FBI agents and local police.

“We know that it’s the cop on the street that’s one of the most important things to be able to keep our communities safe. But yet over the past decade, there’s been a 40 percent reduction in the grant money that’s available for cops on the street,” Yates says.

“It is simply not sustainable for us to continue at the present rates that we are now of our incarceration levels,” she says.

Red States like Texas and Georgia launched efforts to overhaul their justice systems years ago. Now a left-right coalition of groups from the ACLU to Koch Industries is advocating for a smarter approach at the federal level, too.

Here’s what Mark Holden, the top lawyer at Koch, told NPR this year: “We as a people, citizens and our leaders, need to have the humility, the intellectual honesty and the courage to look at what we’re doing and change course.”