Georgia Politics, Campaigns, and Elections for May 20, 2015

Georgia Politics, Campaigns, and Elections for May 20, 2015

On May 20, 1791, George Washington spent his third day in Augusta, where he visited Richmond Academy.

Blue jeans with copper rivets were patented by Levi Strauss and Jacob Davis on May 20, 1873.

On May 20, 1916, more than 20,000 visited Stone Mountain for the dedication ceremony to mark the beginning of a Confederate memorial on the north face.

On May 20, 1995, the section of Pennsylvania Avenue in front of the White House was closed to automotive traffic.

One year ago today, Georgia voters went to the polls in the earliest Primary elections in modern history. In the Republican Primary, 605,355 ballots were cast in the Senate contest, while the Democratic Primary for Senate saw 328,710 ballots.

Yesterday, Brookhaven Mayor J. Max Davis threw his hat in the ring for the Special Election in House District 80.

“Mike Jacobs has provided excellent representation for District 80 and I will build on that tradition. I am excited to have the opportunity to continue my service to the people of Brookhaven and now of Sandy Springs and Chamblee at the state level,” said Davis. “We have, as a community, gotten Brookhaven started right. Police are protecting our streets, which are being paved, so families can go to our improving parks. In just two and a half years, through efficient local control, we have elevated our community.”

The Governor has set the special election for Tuesday, July 14. District 80 covers almost all of Brookhaven, and portions of Sandy Springs and Chamblee.

“I want to take my proven reform agenda and bring it to the state level,” continued Davis. “We have been successful in Brookhaven following those ideas. We cut taxes twice, enhanced services, and have a 4 million dollar reserve. Brookhaven will be left in good hands and on the right path.”

“Our community needs a leader with common sense and a demonstrated track record. I will focus on reforming and improving education. I will also work to get traffic moving through better coordinated actions among all area jurisdictions. Protecting taxpayer dollars and preserving neighborhoods will continue to be my priority.”

Davis previously ran as a Republican for State House District 80 in 2004, losing to Mike Jacobs.

At some point in the coming weeks, the Brookhaven Mayor is likely to either resign his seat or vacate it when he qualifies for State House.

Under the City Charter, since the term of his office has less than twelve months before the regularly scheduled election of Mayor in November 2015, the City Council will appoint a Mayor to serve the remainder of the term. Word on the street is that District One City Council Member Rebecca Chase-Williams will be appointed as Mayor and she will then run for a full term.

If that happens, the vacancy on City Council will be filled by the Mayor appointing a new member to serve through the November 2015 election. The name I’ve heard most frequently for that slot is Linley Jones, who would then presumably run for a full term in the November election.

So, while the entry of Mayor J. Max Davis into the State House Special Election will not cause any additional special elections, it will cause several dominos to fall.

If you’re interested in why this works like it does, it’s because the manner of filling vacancies in office is dictated by the Brookhaven City Charter.

“I’m looking forward to the coming campaign and hopefully to my election to the Georgia House,” Bennett said. “I believe Georgia, and particularly my district, have reached a point in time where we need strong, principled, and energetic leadership. I’m running because I believe in building a better Georgia for employers and employees alike, because I believe in a government that supports the rights and liberties of all its citizens, and because I believe that stronger public schools are the foundation of our state’s future,” he added. “I’m very excited about having these discussions with voters over the next several weeks and discussing how we can work together to achieve our collective goals.”

One of the most frequently asked questions lately has been about the upcoming Special Elections in June and July, so I’ve created a page that has all the information I have on the candidates in those races. Here’s the current slate:

I’m awarding four points to David Van Sant, candidate for HD 24 for a good digital campaign rollout, which includes online advertising on the local news site ForsythCountyNews.com that links to his website. 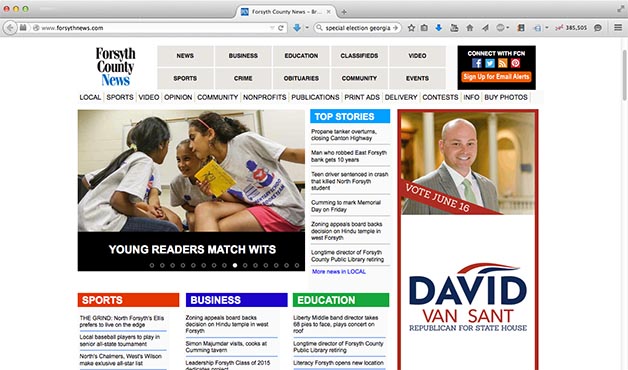 Whither the Tea Party?

The AJC Political Insider blog writes that a default judgment against Tea Party leader Debbie Dooley is evidence of the waning influence of the Tea Party in the Peach State. I don’t think I’d go that far.

One of the issues that made the Tea Party different from other traditional political organizations was its decentralized nature. There was no state convention and no single elected leader. Some tea party groups thrive across Georgia.

Debbie Dooley as the figurehead of the Tea Party is as much a creation of the AJC and other traditional media who followed the AJC’s lead as it is a reflection of Debbie Dooley being more media savvy than most within the tea parties. Her quotability and willingness to go on camera or on the record made her a natural go-to person when reporters felt the need to get a Tea Party perspective.

I fielded a similar question this weekend at the state convention when I was asked why everyone always quotes a particular person in stories about Cherokee County when that person may or may not reflect prevailing opinion of Republican activists or Tea Partiers in Cherokee. It’s at least partly laziness.

Anyway, back to Debbie Dooley and the reported demise of the Tea Party. The reliance upon a movement or a denomination within a movement upon a single charismatic leader also means that when that leader gets pulled in multiple directions, the organization can suffer.

In this case, the pull in other directions may come from Florida and from environmental money flowing to Dooley from her organizing on behalf of solar advocates in Florida.

When Debbie Dooley, a Tea Party firebrand from Woodstock Georgia, makes the case for solar power, she doesn’t rely on the usual environmental talking points. She speaks of property rights, national security and free market competition.

Dooley and Goldwater, along with the right-leaning pro-solar groups they founded, have been widely hailed in media reports as proof that conservatives are beginning to embrace renewable energy. But public records and interviews show the groups’ support among conservative donors is thin, and the money behind them comes almost entirely from liberal-leaning environmental groups and the solar industry itself.

Floridians for Solar Choice, a group Dooley helped found to qualify a rooftop solar initiative for the 2016 Florida ballot, has received about 95 percent of its funding – more than $360,000 – from the Southern Alliance For Clean Energy (SACE) and its political arm the SACE Action Fund, traditional environmental groups with long records of climate change activism.

The SACE Action Fund, for example, describes itself as “striving to make clean energy solutions to climate change a top priority.” When asked by a reporter for her views on global warming, Dooley responded: “That’s not something I am thinking about or taking a position on.”

“You start talking about climate change and global warming and people will tune you out,” she said. “But you talk about monopolies and competition and the need for security against a terrorist attack, they will listen.”

Dooley is hopeful that she can rally broad support among Republicans for her message. “Conservatives are very receptive to solar when the right messenger delivers the right message,” she said.

But her task won’t be easy. Polling by the PEW Research Center in 2014 found that while 65 percent of Americans overall support the development of wind, solar and hydrogen power, about 65 percent of conservatives oppose it.

SACE’s top donor is the Energy Foundation, a California non-profit singled out for scrutiny by Senate Republicans in a 2014 report examining what they said was a “far-left environmental machine that undermines American free enterprise and resource security.”