Georgia Politics, Campaigns, and Elections for May 18, 2015

Georgia Politics, Campaigns, and Elections for May 18, 2015

Georgia’s trustees asked Britain to repeal the law against importing slaves to the colonies on May 17, 1749.

George Washington introduced resolutions in the Virginia House of Burgesses, drafted by George Mason, criticizing Britain’s “taxation without representation” policies toward the colonies.

Button Gwinnett and Lachlan McIntosh met outside Savannah on May 16, 1777 and fought a duel; Gwinnett was mortally wounded.

Gwinnett returned to Georgia immediately after signing the [Declaration of Independence] to find city Whig Lachlan McIntosh commanding Georgia’s nascent military efforts. Determined to take control of Georgia politics, Gwinnett became speaker of the legislature, guided the Georgia Constitution of 1777 into existence and took over as governor when Archibald Bulloch died suddenly in office.

Gwinnett then wanted to lead an expedition to secure Georgia’s border with Florida. A dispute between McIntosh and Gwinnett over who would command the effort ultimately led to their duel and Gwinnett’s death.

A Constitutional Convention met on May 16, 1795 in the capital of Louisville to amend the Georgia Constitution of 1789.

George Washington continued his tour of Georgia on May 17, 1791, staying overnight in Waynesboro; on May 18 he arrived in Augusta.

General Winfield Scott issued an order on the removal of Cherokee people from Georgia on May 17, 1838.

Abraham Lincoln was nominated for President by the Republican National Convention on May 18, 1860.

On May 17, 1864, Sherman and Johnston engaged in the Battle of Adairsville, Georgia.

The United States Senate voted to acquit President Andrew Johnson of 11 Articles of Impeachment passed by the House of Representatives on May 16, 1868.

The United States Supreme Court handed down its decision in Plessy v. Ferguson on May 18, 1896.

The U.S. Supreme Court rule[d] seven to one that a Louisiana law providing for “equal but separate accommodations for the white and colored races” on its railroad cars is constitutional. The high court held that as long as equal accommodations were provided, segregation was not discrimination and thus did not deprive African Americans of equal protection under the law as guaranteed by the 14th Amendment.

The North Georgia Electric Company was incorporated on May 16, 1901 to build a hydroelectric dam on the Chattahoochee River near Gainesville; in 1916, it would be bought by the company that today is known as Georgia Power.

The United States Supreme Court released its unanimous decision in Brown v. Board of Education on May 17, 1954, overturning Plessy v. Ferguson.

The historic decision, which brought an end to federal tolerance of racial segregation, specifically dealt with Linda Brown, a young African American girl who had been denied admission to her local elementary school in Topeka, Kansas, because of the color of her skin.

We solider on into yet another campaign season, this one comprising Special Elections in six State House Seats:

This weekend, the Georgia Republican Party reelected Chairman John Padgett with more than 800 votes to 612 for challenger Alex Johnson. Some folks made much of Padgett’s vote percentage, at 57% being three points lower than 2013. The rest of the offices went like this:

I’m not sure who won the election for Counties with more than 80k population.

Kirk Shook wins two awards – the first for product placement as he spent the entire convention on the stage with his laptop adorned with a sign promoting his candidacy to move up from Assistant Secretary to Secretary. 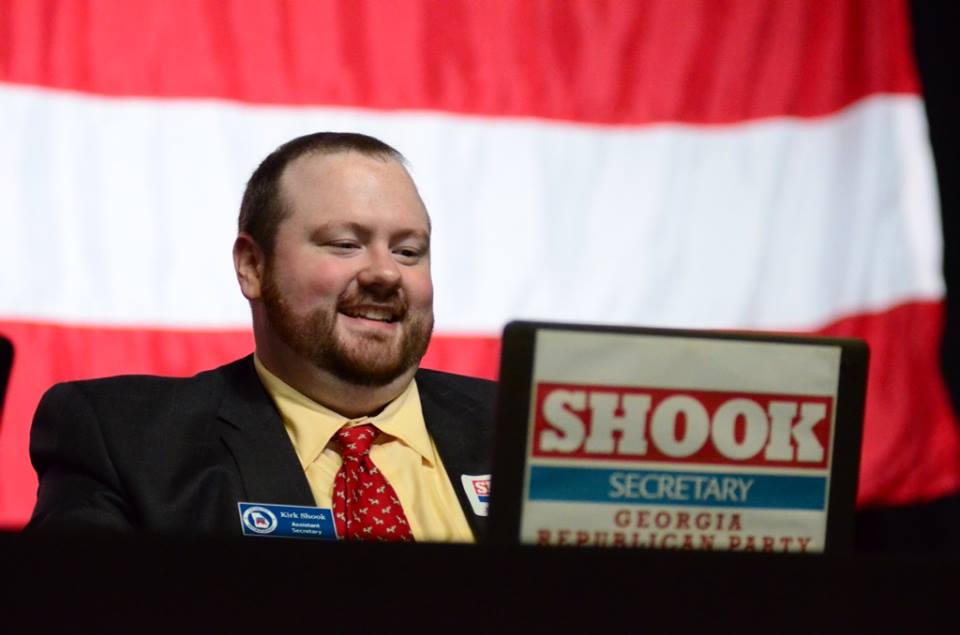 Shook also won the best endorsement award for his wife Miriam’s introduction and endorsement of him when it was his chance to speak to the convention. It also appeared to me from the standing votes that Kirk probably won the highest vote count of the convention. 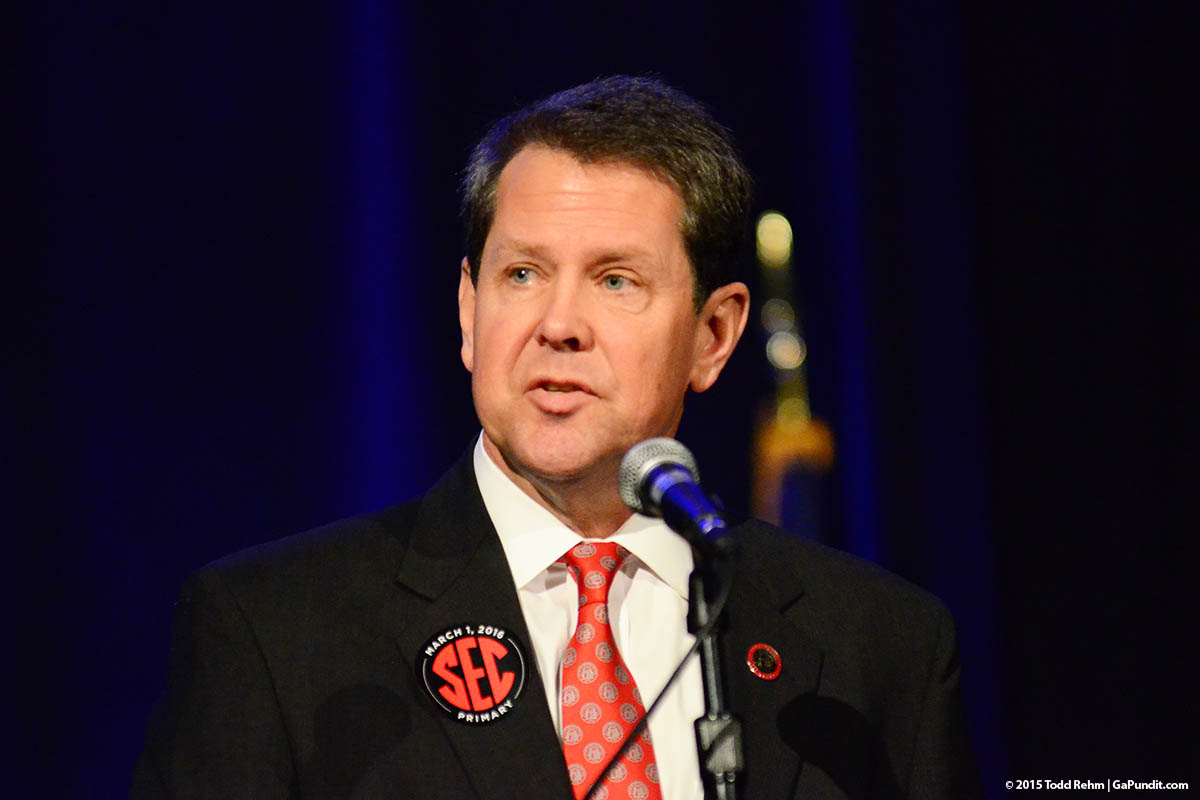 Georgia Secretary of State Brian Kemp also gets an advertising award for the SEC Primary lapel stickers seen on the vast majority of delegates and alternates this weekend. He also receives the first annual GaPundit Heisman Award for Most Valuable Politician. By any measure, the SEC Primary is doing what Kemp intended and bringing top tier Presidential candidates to Georgia to do more than hoover dollars out of private fundraisers. 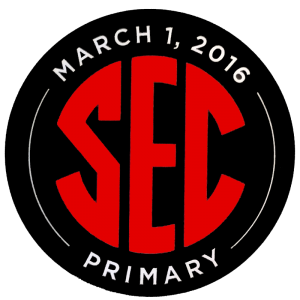 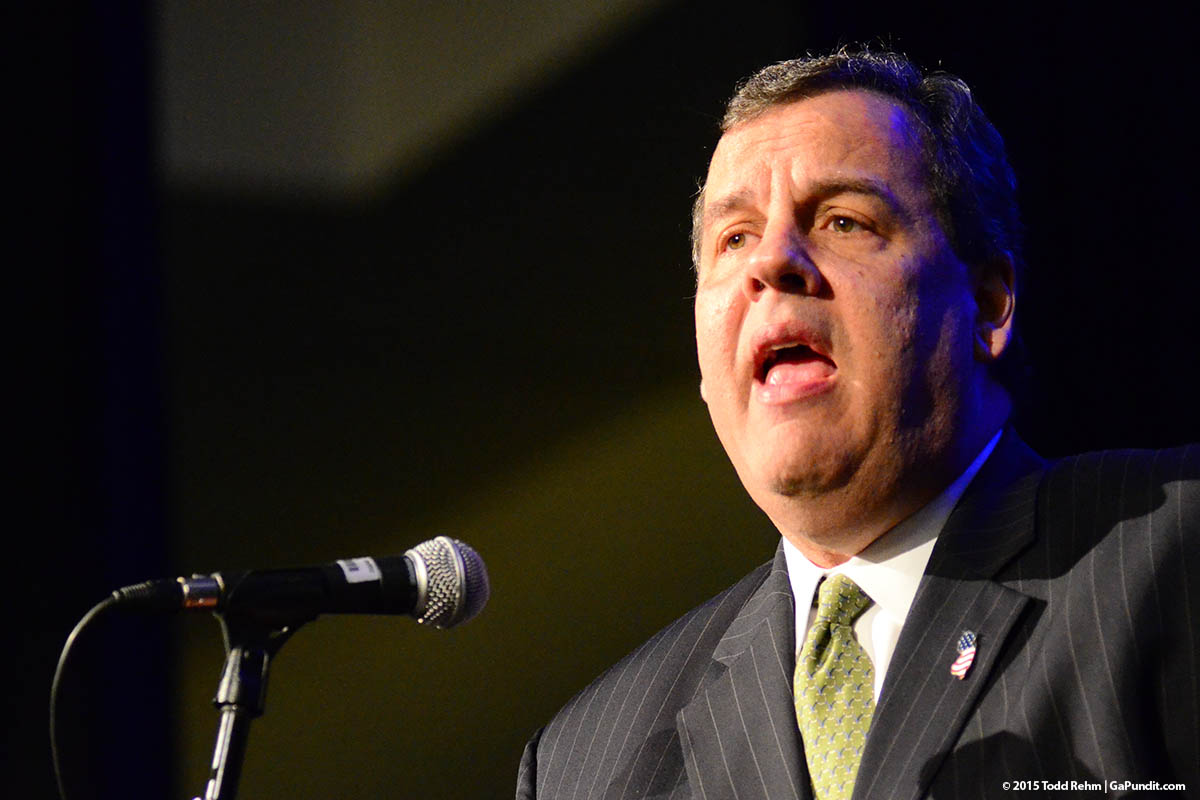 The first of the potential 2016 Presidential (or Vice Presidential) contenders was New Jersey Governor Chris Christie, who spoke at breakfast on Friday.

Jim Thompson of the Athens Banner-Herald wrote about Christie’s speech to delegates,

Touting his record as governor — thousands of private-sector jobs created in his two terms, and an electoral message that attracted an increasing number of minority voters — Christie talked himself up as someone who can work across political lines.

“In a state like mine, I don’t have the luxury of having a Republican legislature,” he said. “You don’t have the option to stand in the corner … You’ve got to make the world turn.”

On the domestic policy front, Christie cited entitlement reform as crucial to the ongoing fiscal health of America. Telling the crowd he thinks elected officials underestimate the American people, Christie said, “I think all of you are not only ready for the truth, you’re hungry for the truth.”

Christie also owned up to his characteristic bluntness, telling the crowd, “People say lots of things about me, good and bad. But no one will ever say, ‘I wonder what Chris Christie is thinking.’ ”

The overwhelming reaction of delegates I spoke to was that they though Christie gave a great speech, that he’s a better candidate than they thought he was and that they’re still not supporting him for President. For the guy who probably had the lowest level of support and lowest unfavorables among Georgia Republicans going in, he did what he needed to – he opened their eyes and made them willing to give him a look, if and when he starts campaigning. 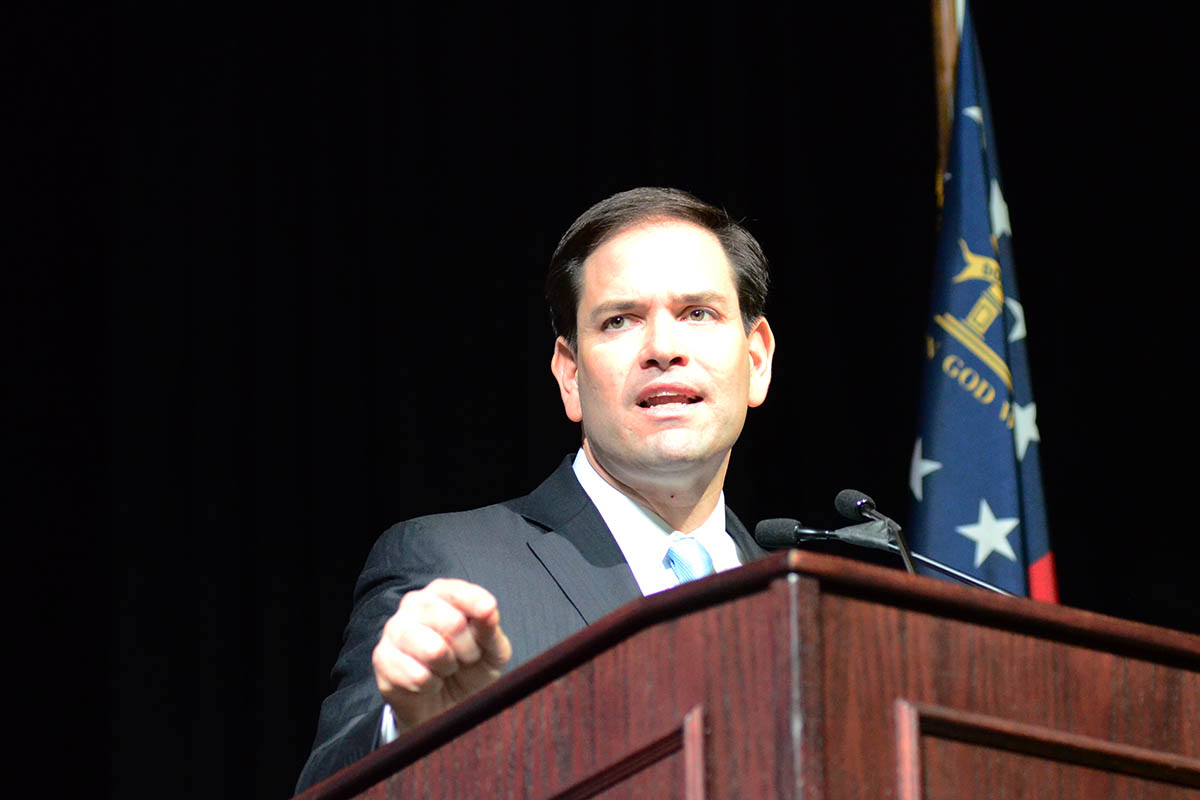 Presidential candidate Marco Rubio didn’t mention Jeb Bush or Hillary Rodham Clinton at the Georgia Republican Convention on Friday, but he said America has too many “outdated” leaders.

The Florida senator said “the 20th century is over, and it’s never coming back,” and he promised “transformational” leadership from a new generation.

The comments were part of Rubio’s sweeping campaign pitch that paints a dire picture of America today, yet promises a better future.

But the theme also helps the 43-year-old senator remind voters that Bush and Clinton have spent decades in public life. 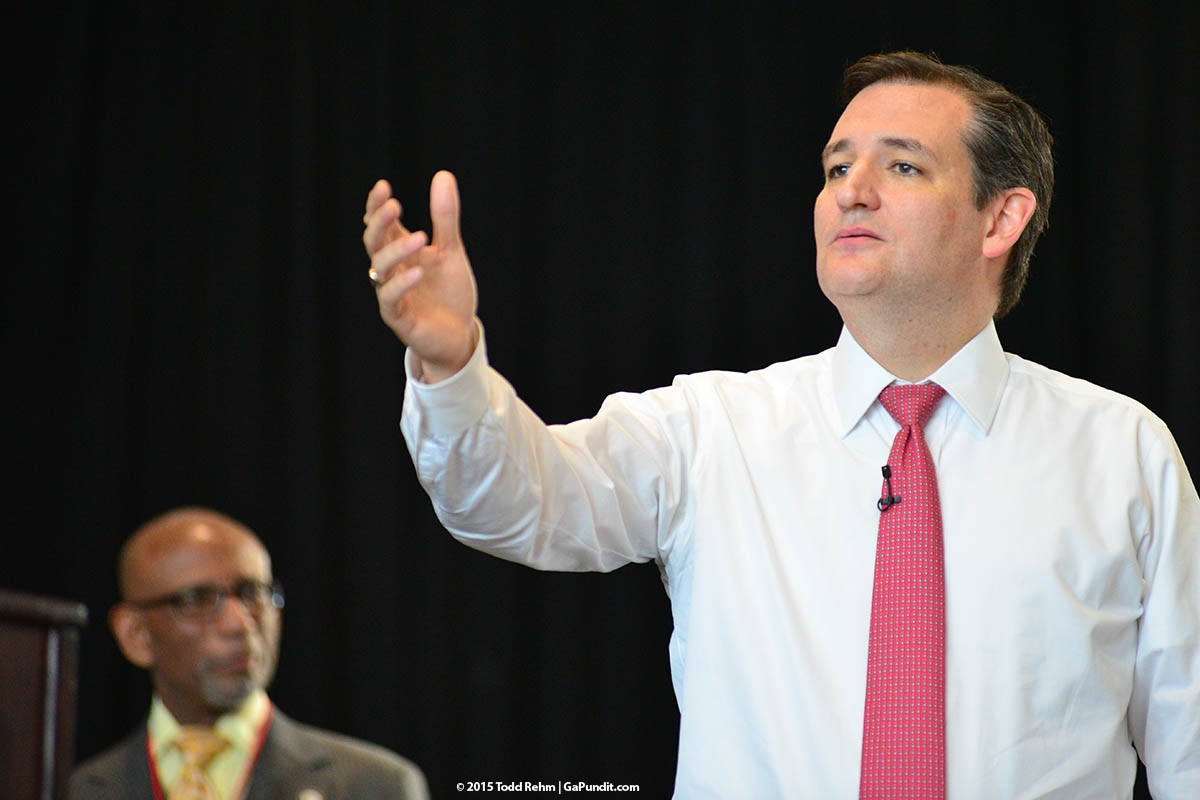 Texas Senator Ted Cruz spoke at two events this weekend – a minority engagement reception (pictured above) and the keynote address at Friday night’s dinner. From Jim Thompson at the Athens Banner-Herald,

Cruz, a first-term U.S. senator from Texas who announced his run for the GOP presidential nomination in late March, touted himself as a true conservative, someone outside the Republican mainstream who can raise money and draw crowds, and who is part of “a new generation that is stepping forward” in the Republican Party.

Alternately serious and playing for laughs — which he received in abundance — Cruz told the hundreds of people who attended Friday’s GOP dinner that “the stakes have never been higher. If we spend another four or eight years on the same path, I believe we will do irreparable damage to our country.”

Espousing tax reform and regulatory reform as keys to boosting growth and opportunity in the United States, Cruz called for “a simple flat tax” on income that would “let every American fill out their taxes on a postcard, and when we do that, we need to abolish the IRS.”

Then, jokingly suggesting that the 90,000 IRS workers who would be out of a job should be put to work guarding America’s southern border, Cruz added, “Just imagine that the first thing you see [if you’re crossing the border from Mexico into the United States] is 90,000 IRS agents. You’d turn around and run home, too.”

I learned two interesting things about Ted Cruz this weekend. First, he has a “body man” who wears a backpack that has a GoPro video camera on one of the straps that’s always recording. I’m not sure why, but it’s kind of ironic given Cruz’s opposition to government surveillance that he has Robocop on his staff. Second is that Cruz travels with his own wireless microphone and has someone on his staff to mike him up before he goes onstage. That’s why he’s able to roam the stage at will, while the other speakers remain tethered to the podium.

Finally, I’d like to mention the award for Use of Technology at the GAGOP Convention, which we hand over to Senator David Shafer, President Pro Tem of the Georgia Senate. At the Convention, if you signed on to the Classic Center’s free wireless internet, you were greeted with a redirect to Shafer’s website. 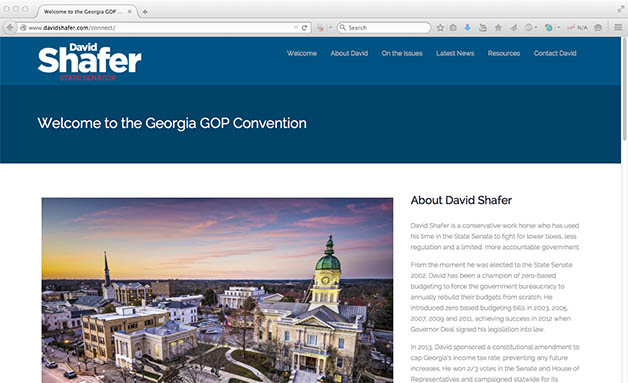