On March 26, 1920, This Side of Paradise, the debut novel by F. Scott Fitzgerald was published. The author was 23 years old.

On March 26, 1982, a groundbreaking ceremony was held in Washington, DC for the Vietnam Veterans Memorial; the design approved a couple weeks earlier was by 21-year old Yale architecture student Maya Lin.

So far this year, Governor Nathan Deal has signed ten bills into law. This is the same pace as last year, and most of the legislation signed to date has been local.

It is being widely reported that Gov. Deal will sign House Bill 1 at 11 AM at the Capitol tomorrow, Friday, March 27, 2015 on the steps of the State Capitol.

SB 119 – “Water Professionals Appreciation Day”; designate the first Monday in May of each year in Georgia (NR&E-Smith-70th) Jeffares-17th

SB 101 – Soil Erosion and Sedimentation; provide for buffer against coastal marshlands within which certain land-disturbing activities are prohibited (NR&E-Stephens-164th) Watson-1st (AM 40 0138)

House Bill 393, the bill that would allow Tesla Motors to own up to five dealerships in Georgia and sell their cars to buyers, passed the Senate on a vote of 48-44.

The Georgia House voted to agree to the Senate version of House Bill 1, which allows the medical use of oil derived from marijuana for eight conditions, for adults or children, with a doctor’s prescription. Pictured below are the bill’s primary sponsor, State Rep. Allen Peake (R-Macon), with Janea Cox and Haleigh Cox, for whom the bill was named. 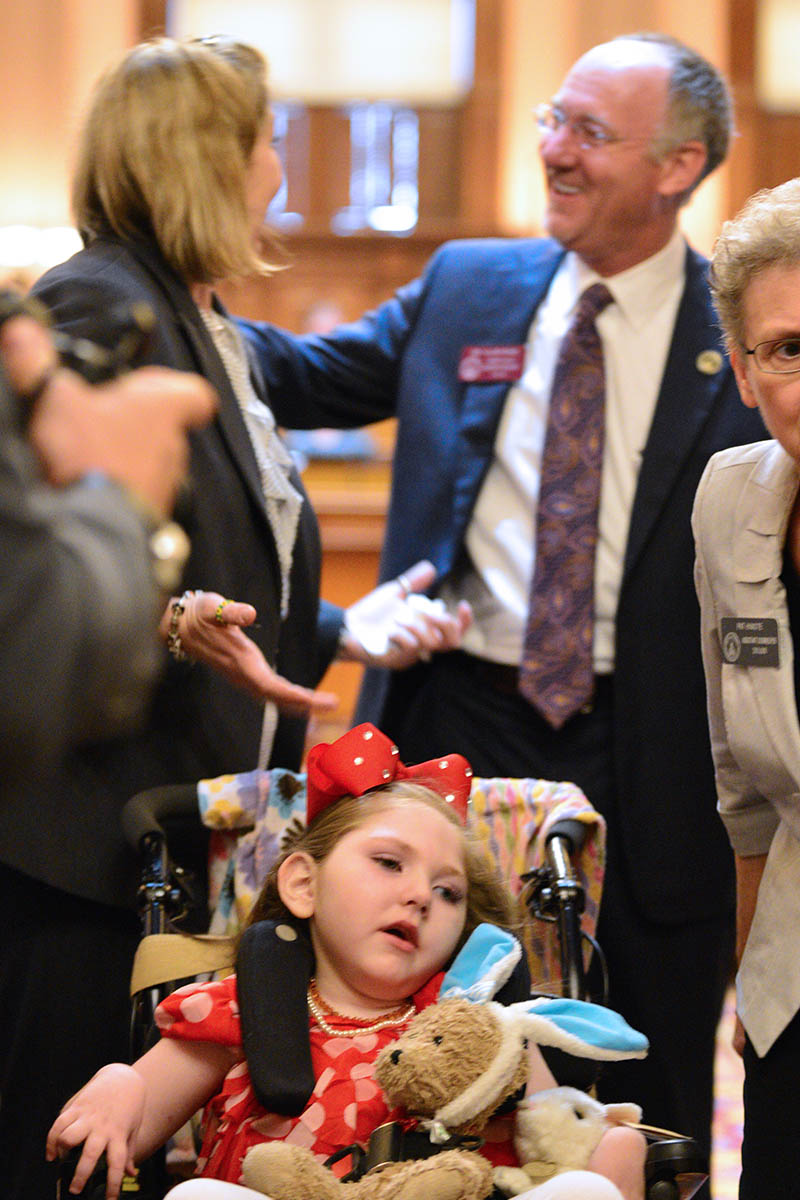 From the Atlanta Business Chronicle,

The state House of Representatives passed the medical marijuana bill 160-1, ending two years of struggle to exempt from prosecution Georgians in possession of cannabidiol.

The bill began last year as an effort to help children with seizure disorders. After it died on the final day of the 2014 legislative session, 17 families moved from Georgia to Colorado so their children could get access to the drug.

“House Bill 1 brings them all home,” Rep. Allen Peake, R-Macon, the bill’s chief sponsor, said shortly before Wednesday’s vote. “House Bill 1 provides relief from pain and hope for a lot of citizens in our state.”

There was a standing ovation inside the House of Representative’s chambers for Janea Cox and her five-year-old daughter Haleigh as a dream more than a year in the making came true.

“It takes a huge weight off our shoulders, that we don’t have to stay in Colorado for another year to wait for legislation to pass,” Cox said.

Cox was there as House lawmakers overwhelmingly passed the Senate’s revised version of House Bill 1. She cried and hugged Rep. Allen Peake as the results from the vote came back 160 to 1. The medical marijuana measure will help her come back to Georgia and reunite with her husband she left in Forsyth.

The mother reached out to Peake last year as a final effort to get help for Haleigh.

“To be able to see her now, where she smiles at me and makes eye contact and says mama…we know she’s in there. We just have to dig her out from the seizure meds,” Cox said.

Of course, this is a great day for the Georgians who will find relief and it provides hope for those whose conditions are not covered by this law but who see promise in CBD-oil treatment. It is my sincere hope that Georgia’s citizens will see this as proof that one person can make meaningful changes in Georgia through the legislative process with the support of their elected representative. This is truly a feat of the legislature coming together to reflect the changing facts and feelings of their constituents.

Not so much with Autism, whose sufferers got tied up in last year’s medical marijuana legislation. Yesterday, House Insurance Committee Chairman Richard Smith (R-Columbus) took to the well to say, “Senate Bill 1 will not pass…. I’m telling the children over there to put up or shut up,” clearly referring to the Senate as children.

Senate Bill 1 would require small business healthcare plans to pay for some types of Autism treatment.

Rumor is the Senate Rules Committee had been blocking legislation authored by members of the House Insurance Committee to pressure Smith to allow SB1 out of Committee.

Smith did offer a way forward, stating that he will introduce legislation for a fractional sales tax of 2/10 of a percent to fund Austism treatment for Georgia children. My fear is that someone else is already planning to grab 8/10 of a percent to make it an even penny.

Governor Deal’s plan to put on the 2016 ballot a Constitutional Amendment creating an “Opportunity School District” that could take over consistently failing schools from local board control narrowly passed the House with the requisite Constitutional supermajority. Senate Resolution 287, which authorizes the statewide referendum to amend the Georgia Constitution garnered 121 “Yea” votes, reaching the 2/3 majority required to place an Amendment on the ballot.

Senate Bill 133, the companion “enabling legislation” that governs how an Opportunity School District will operate if the Amendment is passed by voters required only a majority and passed the House by a 108-53 margin.

From Maggie Lee, writing for the Macon Telegraph,

Its superintendent would report directly to the governor and have broad powers to choose schools for the program, select goals for each school and decide on the principal.

That principal and the Opportunity School District would make decisions about staff, curriculum and school finances.

The superintendent also could waive certain state school rules, but nothing relating to safety or civil rights.

Any failing charter school would get a new board named by the superintendent.

Critics such as state Rep. James Beverly, D-Macon, voted against it. He said it’s a bad idea to put so much power in the hands of an appointed person who may not know an area’s particular problems and strengths.

“I think that Bibb County is a shining example of a dysfunctional board (of education) that became functional because they started to reason with one another, and no strong arm of the state government had to come in,” he said.

House Majority Leader Larry O’Neal, R-Bonaire, asked his colleagues to join him in a “yes” vote to create the Opportunity School District.

“When a school chronically remains in failing status … all of us have failed the children of Georgia attending that school,” O’Neal said.

The targeted schools are ones that have spent at least three years at the bottom of a state Department of Education scorecard on student achievement and progress.

The Georgia Senate yesterday passed cityhood bills for LaVista Hills and Tucker with changes to the border between the two prospective municipalities. Senator Fran Millar (R-Dunwoody) carried the bills and spearheaded the changes over the strenuous objection of Sen. Elena Parent (D-Druid Hills). Those changes to lines carefully negotiated in the House also carry the realistic possibility of the whole thing imploding.

The highlight of the entire day came when Sen. Millar was in the well and a colleague of his rose to ask, regarding the importance of naming cities, whether Millar, “ever considered calling the entire area the Greater Mother Tucker area.” I’d offer ClusterTuck as an alternative description.