On March 11, 2005, Brian Nichols shot and killed Fulton County Superior Court Judge Rowland Barnes and court reporter Julie Brandau in the Fulton County Courthouse, leading to a lockdown of the state capitol and a number of nearby buildings. Nichols killed two more before taking a young woman hostage in Duluth; that woman, Ashley Smith, would talk Nichols into surrendering the next day. Nichols was eventually convicted for four murders and is serving consecutive life sentences.

Happy Birthday to former Governor Roy Barnes, who served from 1999-2003, and lost to Republican Sonny Perdue in 2002, and to current Governor Nathan Deal in 2010.

One of his articles, in 1962, caught the attention of Robert F. Kennedy, the attorney general at the time. It described a south Georgia sheriff and his deputies intruding on a voting rights meeting at a church in Terrell County and menacing the citizens there. One officer repeatedly struck his palm with a large flashlight as if it were a club; another ran his hand over his revolver and cartridge belt.

Mr. Sitton began by quoting the sheriff: “We want our colored people to go on living like they have for the last hundred years.”

“It was not that Claude was some flaming liberal or liberator,” Mr. Klibanoff told The Associated Press in an interview. “He just liked a good story and liked to have it first. And frequently he was reporting on injustice — and they knew, on the civil rights side, that if The New York Times wrote about it, it would get attention from important people.”

Sitton was an alumnus of Emory University and when I was at the College, he was a professor there, teaching the history of the Civil Rights Movement.

SB 128 – Corporations; directors and officers; enact reforms consistent with the Model Act; functions of a board of directors; change provisions
(As Introduced) (JUDY-18th)

SR 155 – U.S. Congress; encouraged to adopt and to submit to the states a balanced amendment to the U.S. Constitution and balance our current budget (As Introduced) (GvtO-32nd)

SB 99 – Conduct of Proceedings; reversal on appeal; judge expresses an opinion regarding proof in a criminal case; change provisions (As Introduced) (Substitute) (JUDYNC-18th)

SB 184 – Dogs; provide breed-specific regulation shall be limited to enactment by general law (As Introduced) (AG&CA-8th)

SR 350 – Congress; urged to enact the FairTax; express the State of Georgia’s commitment to ratify the repeal of the Sixteenth Amendment
(As Introduced) (FIN-32nd)

HB 114 – Drivers’ licenses; provide for use of paper eye charts for testing of noncommercial driver’s vision; provisions (Substitute)(PS&HS-Tanner-9th) (AM 39 0104)

HB 123 – Motor vehicles; use of safety chain or cable when operating a motor vehicle drawing a trailer; provide (Substitute)(PS&HS-Yates-73rd)

The State House passed earlier this week House Bill 215 by State Rep. Mike Jacobs (R-Brookhaven), which adjusts the tax structure of DeKalb County and will place on the ballot an additional penny sales tax.

Lawmakers voted 128-35 Monday to authorize a referendum asking DeKalb voters to approve a penny sales tax increase, which would take the local sales tax there from 7 percent to 8 percent. The revenue the additional sales tax would raise would be used to offset the impact of a proposal to dedicate 100 percent of the revenue raised by DeKalb’s Homestead Option Sales Tax (HOST) to reducing property taxes. Currently, only 80 percent of HOST revenue goes for property tax relief, while the other 20 percent pays for infrastructure improvements.

The bill would have a major impact on property taxes in DeKalb County. For example, the owner of a home in Decatur assessed at $500,000 would receive about a $1,000 property tax cut, said state Rep. Mike Jacobs, R-Dunwoody, the bill’s chief sponsor.

The bill that would have amended the state’s Certificate of Need law to allow greater flexibility for Cancer Treatment Centers of America’s facility, has been pulled from consideration.

The State House passed HB 110 by State Rep. Jay Roberts (R-Ocilla), to allow sales of fireworks. From the Times-Herald (Newnan),

House Bill 110 would allow and regulate the sale of consumer fireworks. It passed the House Monday by a vote of 119 to 49.

It now moves to the Senate. The Senate passed a bill in 2013 to regulate fireworks, and Jeff Mullis, R-Chickamaugua, chairman of the Senate Rules Commission, has been an outspoken advocate for fireworks legalization.

Mullis’ 2013 bill had a companion resolution calling for a public vote on a constitutional amendment that would devote money raised from sales taxes on fireworks to trauma care and fire department services. The bill got stuck in the House.

While legalizing fireworks, HB 110 makes it illegal to release flying Chinese lanterns or any other type of device into the air that requires fire for propulsion, or to release floating lanterns on any public waterway.

Under HB 110, it would be illegal for anyone under the age of 18 to buy, use, possess, manufacture, transport or store consumer fireworks.

Only non-profit agencies could sell fireworks from a temporary stand, and no consumer fireworks could be sold from under a tent, in a trailer, or from a vehicle. The currently allowed sparklers and fountains are not considered “consumer fireworks” under HB 110 and would not be subject to the new regulations.

Owners of permanent fireworks stores must maintain $2 million in liability insurance coverage and pay annual licensing fees. The initial fee will be $5,000 per location. Renewals will be at $1,000 per year.

Public Service Commissioner Tim Echols set up an encore performance of the “Unholy Tour” to show how minor sex trafficking is thriving in Atlanta, so that legislators and members of the public may better understand the issue and the importance of fighting sex trafficking. From CBS 46,

[Kasey] McClure and State Sen. Renee Unterman (R), of Buford, took CBS46 on a tour of the seamy underbelly of metro Atlanta’s sex industry, an industry that’s destroying the lives of the children it ensnares.

“It is a form of sexual slavery and we have to stop it,” McClure said.

CBS46 drove by streets and hotels where children are forced to hook up with strangers, risking physical harm and even death.

McClure, who runs an advocacy and help group called 4Sarah, reaches out to women and girls to tell them there is a better way.

“We tell them we’re not judging you. We just love them where they’re at,” McClure said.

The pimps and the people who make money off the children often go unpunished.

Unterman is sponsoring a proposal to toughen the penalties against sex traffickers. The bill would force convicted sex traffickers to register as sex offenders and give victims more time to press charges against their abusers.

“I think men should be locked up if they’re having sex with a minor. They should be put away for life because they’re taking that child’s life,” McClure said.

Obama shared four main elements of his proposed bill of rights during his trip to Atlanta:

I. Every students deserves access to a quality, affordable education at a college that’s cutting costs and increasing learning

II. Every student should be able to access the resources needed to pay for college.

III. Every borrower has the right to an affordable repayment plan.

IV. And every borrower has the right to quality customer service, reliable information, and fair treatment, even if they struggle to repay their loans.

The Muscogee County School Board has an E-SPLOST on the ballot next Tuesday and administrators are out there making the case for the tax referendum.

[Muscogee County School District Superintendent David Lewis] left Tuesday night’s crowd of about 60 in the Columbus Public Library auditorium with this final message one week before the school district’s sales tax referendum will be decided: “Be informed, help inform others, and make sure everyone exercises their right.”

Lewis’ administration is requesting voters renew the Special Purpose Local Option Sales Tax that expired Dec. 31. The 1 percent sales tax would last for five years or until $192,185,000 is collected to pay for or help fund 24 capital projects.

“I learned that there was a lot of misinformation about the SPLOST that I just assumed people had known because we’ve done the SPLOST in past years,” [Lewis] said. “Even in the schools, I found several times, maybe because people were new to our district, I found that people were not fully informed or not aware of what the SPLOST could and could not be used for.”

The money collected can be used for only capital projects, such as: school construction, addition or renovation; technology; new buses; furniture, fixtures and equipment. SPLOST money can’t be used for: day-to-day operating expenses; salaries and other personnel expenses; to offset a budget shortage; books and curriculum.

Meanwhile an effort to defeat the SPLOST is also underway, according to The Ledger-Enquirer,

he week before the Muscogee County School Board votes on whether to authorize a tax referendum, a website campaigning against the proposal already is online.

And two of the board’s nine members helped launch it.

“I think it expresses my views on the SPLOST,” Thomas said. “There’s a group of people involved in supporting the anti-SPLOST movement, and I think some of them would prefer to remain anonymous.”

Nathan Smith, a financing company manager who campaigned for Myers and Thomas last year, confirmed he is among that group. Smith acknowledged he administers the Facebook page linked to NoSchoolBoardtax.com, which had 223 likes as of Wednesday afternoon, two days after it was created.

In the City of Atlanta, proponents of the two referendums that will allow the issuance of approximately $250 million in bonds are circulating the following flyer, presented here solely as information. 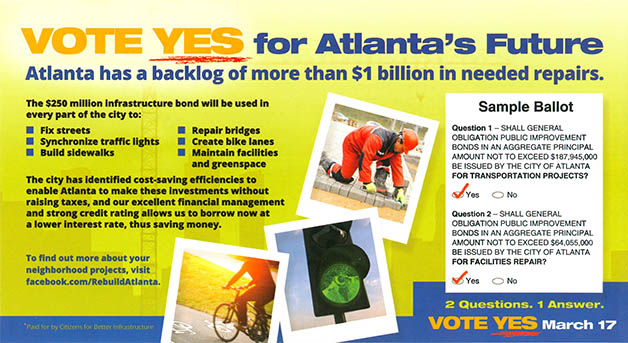 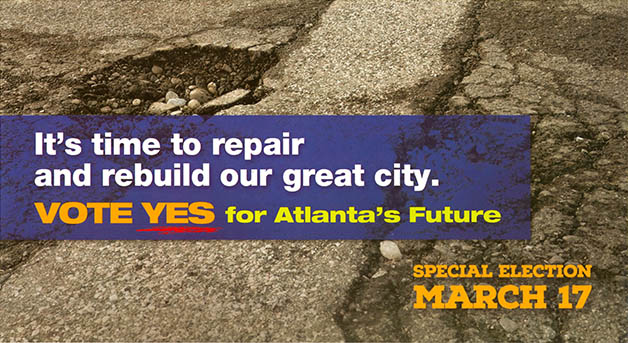