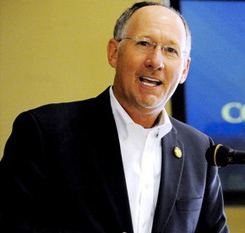 The Georgia House of Representatives today passed House Bill 1, or the Haleigh’s Hope Act, by a vote of 158-2. HB 1, sponsored by State Representative Allen Peake (R-Macon), would decriminalize the possession of medical cannabis in Georgia.

“Today, we have passed a bill that will begin to reunite families who have been torn apart in their pursuit of medical treatment,” said Rep. Peake.  “When I began this journey, I made a promise to bring those families home and to give Georgians a chance to obtain medical cannabis oil in our state without fear of prosecution.  I thank my colleagues in the House for their support and Governor Deal for his leadership as we worked toward today’s vote.”

“I congratulate Rep. Peake on the passage of Haleigh’s Hope Act, the medical cannabis oil bill, that will bring relief to Georgia families with loved ones suffering from seizures and other illnesses,” said Speaker of the House David Ralston (R-Blue Ridge).  “Rep. Peake passionately pursued his goal of helping others while listening to all involved stakeholders and working collaboratively to arrive at the legislation passed today.”

HB 1 would provide immunity for the possession of cannabis oil for individuals with certain medical conditions who have obtained cannabis oil legally in another state.  Qualifying conditions under HB 1 include Cancer, Multiple Sclerosis, Seizure disorders, Amyotrophic lateral sclerosis (ALS), Crohn’s disease, Parkinson’s disease, mitochondrial disease, sickle cell disease, and Fibromyalgia. These individuals would only be allowed to possess cannabis oil with a maximum of 5 percent THC and a maximum amount of 20 fluid ounces of cannabis oil. HB 1 would also require that potential patients register with the Georgia Department of Public Health and be placed on the “Low-THC Oil Patient Registry.”  These individuals will receive a registration card that exempts them from prosecution in Georgia for possession of medical cannabis oil that has been legally obtained in another state and meets the aforementioned requirements.

House Bill 1 will now go to the Senate for consideration.