The vote was unanimous. The Georgia State Assembly approved House Bill 247 on Feb. 19, 1953, with no dissent, establishing the Georgia Literature Commission. Despite being born into controversy, it lived on for 20 years surviving legal and legislative challenges until the administration of then-Gov. Jimmy Carter defanged it, setting off its slow death.

After years of support, then-Gov. Jimmy Carter cut the commission’s annual appropriation by about 20 percent in 1971, while simultaneously fighting a public battle against pornography. His administration then implemented zero-based budgeting, in which each governmental organization had to justify itself, which had become increasingly hard to do for the commission.

On February 19, 2014, Elana Meyers (now Elana Meyers Taylor) won the Silver Medal in bobsled in the Sochi Olympics. Last week, Meyers Taylor won the overall World Cup for women’s bobsledding. This tremendous athlete is from Douglasville, Georgia and her father Eddie Meyers was a standout running back at the Naval Academy who served six years in the Navy and signed with the Atlanta Falcons after his service.

If you find yourself hungry one month from today and you’re unwilling to wait in the McDonald’s drive-thru as they try to make change for a $1000 bill, you can head over to the Capital City Club Downtown for breakfast with Jeb Bush. 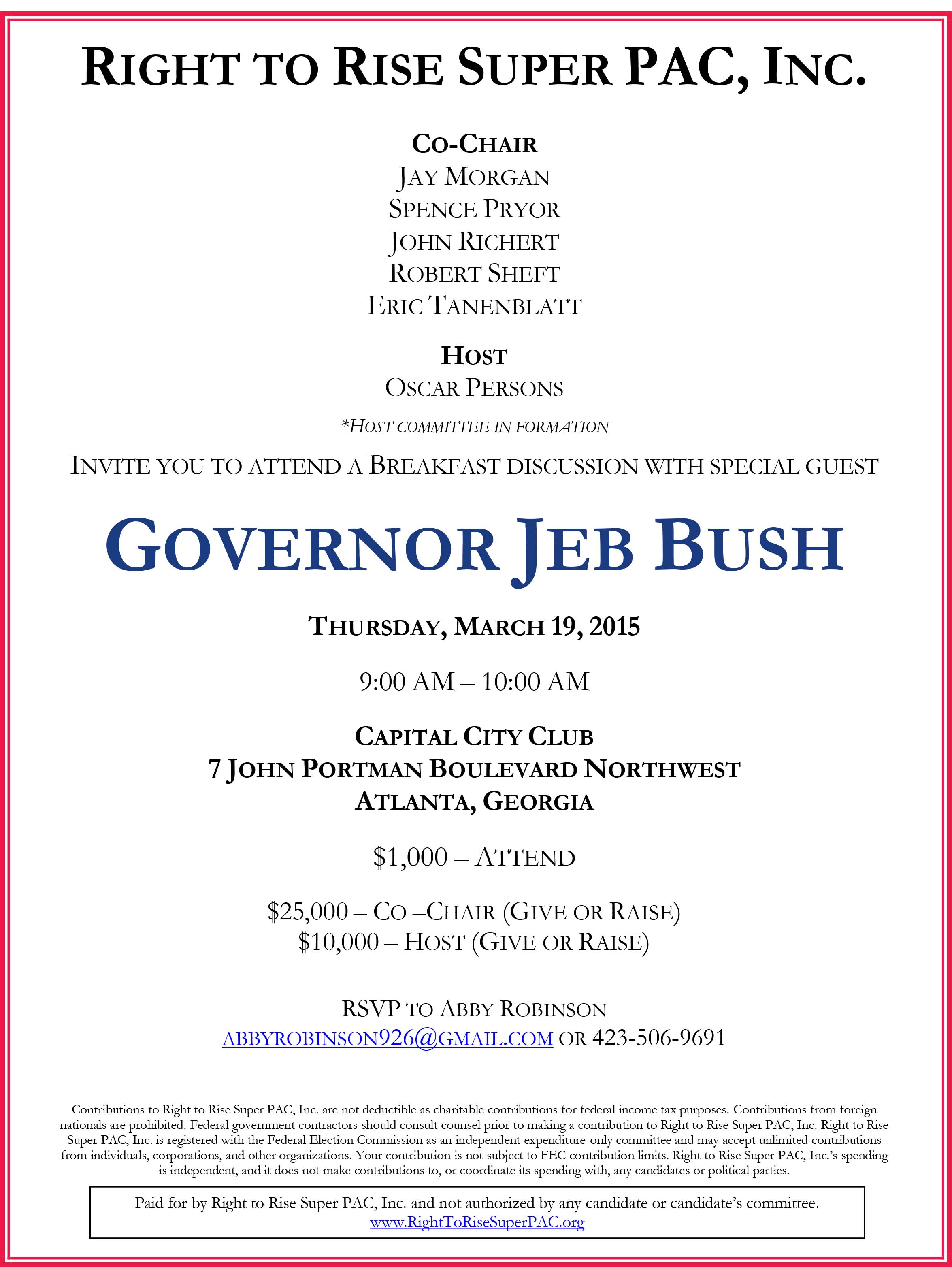 If you’re looking for an assessment of how the potential 2016 Presidential campaigns are doing, here it is:

1. When Mike Huckabee came to town he was in a bus selling books and had a great turnout, probably over 100 people.

2. When Rand Paul came to town, he pulled a very diverse crowd different from whom you might see at Young Republicans or County Party meetings.

3. When Jeb Bush came to Atlanta, he arrived and left quietly but needed several minions to carry the fat stacks of cash he walked away with, thanks to a top-tier group of fundraisers.

HB 100 – Education; date by which a child must reach a certain age in order to be
eligible for enrollment in certain educational programs; change provisions
(Substitute)(Ed-Dickson-6th)

HB 227 – Sales and use tax; programmable thermostats from the definition of Energy
Star Qualified Product for purposes of the state sales tax holiday; remove
(W&M-Duncan-26th)

If I were a betting man, I’d take Senate Bill 5 by Majority Leader Bill Cowsert as the odds-on favorite to be the first general bill passed by both houses and signed by the Governor. There is widespread agreement on this bill that makes technical changes to allow the Port of Savannah Expansion Project to move forward with federal and state funds.

If I’m not mistaken, the Transportation Tax Bill, HB 170 by Rep. Jay Roberts (R-Ocilla) is in its third public iteration as it passed the House Transportation Committee yesterday.

[T]he new version of the bill will let local governments charge 1.25 percent in sales tax instead of the originally proposed 1 percent. This is supposed to help heal wounds among county and city officials, many of whom have complained about the transportation bill because it takes away their control of sales tax on gas.

Right now, local officials can charge sales tax at the pump like they do in stores.

Roberts announced one other change. In the earlier version of the bill, no gas tax revenue could be spent on education. Now, local governments can spend a portion on schools, so long as that money is spent on transporting students.

The Atlanta Journal-Constitution notes three Committee members who voted against the bill:

Only three committee members voted against it: Republican Reps. Ed Setzler of Acworth, Tom McCall of Elberton and Tommy Benton of Jefferson. All Democrats on the committee voted in favor.

The Georgia Craft Brewers Guild’s favorite legislation to allow sales of beer “for here or to go” from breweries was heard in Senate Regulated Industries yesterday, according to Kristina Torres of the AJC.

The state’s wholesalers oppose the bill. Both sides made their pitch to members of the Senate Regulated Industries and Utilities Committee during the hearing, which was the first time the bill went before the committee. No vote was taken, although one is expected as soon as next week.

Changes to the bill seem likely. Local authorities want to be sure it doesn’t tie their hands to collect taxes, although that language is not yet in the bill. Committee members indicated they wanted to make sure the bill did not create unwanted loopholes. Some members said they had no problem with the concept, but they may want to put stricter limits on how much beer someone could buy.

“I don’t have a problem making a sale, but would you entertain pushing (the limits) back down to 32 ounces?” asked state Sen. Frank Ginn, R-Danielsville. Breweries currently can give patrons small, hand-drawn “samples” of their beer up to 32 ounces — but they have to be given away for free after purchase of a souvenir glass.

I’d guess that the chances of major changes in the alcohol sales laws are unlikely this year, if for no other reason than that it’s very uncommon for a big bill to pass its first year.

At GPB, Pete Overby notes that 2014 saw the most-expensive elections to date nationally.

The 2014 congressional midterm elections cost $3.77 billion, the [Center for Responsive Politics] says, making them no surprise here the most expensive midterms yet. CRP also reports that those dollars appeared to come from a smaller cadre of donors 773,582, the center says. That’s about 5 percent fewer than in the 2010 midterms.

CRP found that the average contribution swelled from $1,800 in 2010, to slightly more than $8,000 in 2014. That appears to reflect the growth of superPACs, political committees created by the Supreme Court’s Citizens United ruling and other court decisions earlier in 2010. SuperPACs disclose their donors but have no contribution limits.

Emory University Political Scientist Alan Abramowitz (D) writes about 2014 PAC spending and whether it made much difference in a Republican wave election.

While there is little evidence that conservative outside groups were successful in influencing the results of either the presidential election or key Senate contests in 2012, some observers believe that their efforts may have had a greater impact on the 2014 midterm elections, especially in the crucial battle for control of the Senate. Conservative groups spent more than $250 million in support of Republican Senate candidates in 2014, including almost $35 million in North Carolina, more than $33 million in Colorado, and more than $31 million in Iowa. Republican candidates won all three of those races and almost every other key Senate contest, scoring a net gain of nine seats in the upper chamber.

There is no question that 2014 was a very good year for Republicans, especially in the U.S. Senate elections. The question remains, however, to what extent did outside spending by conservative groups contribute to GOP gains in the 2014 Senate elections? On that score, there are good reasons to be skeptical.

For one thing, liberal groups did a decent job of matching conservative groups in 2014 when it came to outside spending. [T]he 10 Senate races with the largest amount of total outside spending… accounted for over 90% of spending by outside groups on the 2014 Senate elections. Altogether, liberal groups spent about $215 million to support Democratic candidates in these 10 states while conservative groups spent about $224 million to support Republican candidates.

In four of these races, including North Carolina and Colorado, outside spending by liberal groups was actually greater than outside spending by conservative groups. And even where one side had an advantage in spending, as in Georgia or Michigan, it appears that both sides had more than enough money to get their messages across to the voters, especially when party spending and candidate spending are considered along with outside spending.