Via The Times of Israel 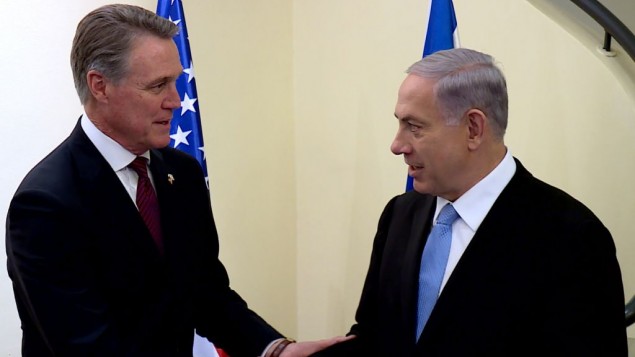 Prime Minister Benjamin Netanyahu on Wednesday said Israel is aware of the details of the negotiations between Iran and world powers on its nuclear program, as reports surfaced indicating that the US was leaving Jerusalem out of the loop on the ongoing talks.

European officials confirmed that the US State Department cautioned them against providing Israel with sensitive information on the current round of negotiations with Iran over its alleged nuclear weapons program, The New York Times reported Tuesday.

The account came amid vehement denials by the White House and State Department that they had stopped updating Jerusalem on the progress in the talks, even though Netanyahu hinted Monday that Israel was indeed not being fully apprised.

In a meeting with US Senator David Perdue (R-Georgia) on Wednesday, Netanyahu said Israel knows the contours of the agreement emerging from the talks, warning that it is “a bad deal, a dangerous deal.”

“While Islamic State butchers the innocent, the Islamic Republic of Iran is relentlessly pursuing nuclear weapons with the express purpose of destroying the State of Israel. The P5+1’s latest proposal won’t stop them,” Netanyahu said.

“The Iranians of course know the details of that proposal and Israel does too. So when we say that the current proposal would lead to a bad deal, a dangerous deal, we know what we’re talking about, senator,” he said.

Referring to his upcoming speech to Congress, which Washington and others oppose, Netanyahu said he was open to hearing the opinions of those who disagree with his approach, “and I would hope that they would be open to hear the arguments of Israel as well.”

The prime minister also offered condolences to Egypt for the killings of 21 Coptic Christians in Libya by an Islamic State affiliate, saying “Israel will continue to stand side-by-side with Egypt in the battle against terrorism, which threatens us all.”

Earlier Wednesday, the New York Times report quoted an unnamed European official involved in negotiations who said he was told recently by the State Department’s Wendy Sherman, the lead American negotiator with Iran, not to disclose too much information to the Israelis because “the details could be twisted to undermine a deal.”

Another unnamed State Department official speaking on Sherman’s behalf noted that talk with Israel was encouraged, so long as it remained clear “that the negotiation should take place in the negotiating room,” a reference to the fact that Israel is not directly involved in the talks.

The comments echoed those of an Israeli official interviewed for the report who quipped that he received only “empty” briefings on the looming deal, signalling perhaps a further chill in ties between the Obama administration and the Jewish state that The New York Times compared to “posting notes to each other on a refrigerator door.”

Netanyahu has repeatedly stated that the Iranian nuclear program is an existential threat to Israel and that Tehran is intent on developing nuclear weapons to use against the Jewish state.

To that effect, Netanyahu has vowed to go ahead with a speech before the US Congress on March 3 to discuss the looming nuclear deal, raising the ire of the White House, some US congressmen and his political opponents in Israel.

The report quoted another European official who said that US Secretary of State John Kerry was “fuming about [the] Israeli leaks” following a report Sunday on Channel 2 to the effect that the administration has been withholding information from Israel.

The report was hurriedly denied by both US and Israeli officials.

Kerry, who has been leading the negotiations along with his Iranian counterpart, Mohammed Javad Zarif, argued that it was in no one’s interest to negotiate in public.

Britain, China, France, Russia, the United States and Germany — known as the P5+1 — have been seeking a comprehensive accord with Iran that would prevent Tehran from developing a nuclear bomb in return for an easing of economic sanctions.