Fidel Castro was sworn-in as Prime Minister of Cuba on February 16, 1959.

On February 16, 1968, Speaker of the Alabama House of Representative Rankin Fite placed the first 911 call from Haleyville City Hall to Congressman Tom Bevill at the Haleyville police station.

The Georgia General Assembly is in adjournment today and will convene tomorrow for Legislative Day 16. Capitol Hill in Atlanta is closed today by Executive Order of Governor Deal, as are state offices in 15 counties in North Georgia.

The common refrain I’ve noted among critics of Gov. Nathan Deal’s plan for an Opportunity School District is that in many areas, intractable poverty underlies persistently “failing” schools. From an article from the Macon Telegraph responding to Gov. Deal’s proposal.

The main problem, [Tim Callahan, a spokesman for the Professional Association of Georgia Educators] said, is students who are so dramatically affected by poverty that they have “a raft of needs.”

Low-performing schools generally have many students who come from low-income families, Callahan said. And poor students often struggle academically, he said, because of recurring problems stemming from their quality of life — from health issues to their home environment.

“None of those struggles are going to be addressed by simply changing out the administrative structure of their school. The problem is a little more difficult, a little more expensive and a little more complicated that the governor and his folks would have us believe,” Callahan said.

Greg Bluestein of the AJC writes of apparently differing approaches to the Opportunity School District bill taken by the Senate and House Democratic caucuses.

Senate Democrats are waging open warfare on the proposal, which would give the state new powers to take over perennially failing schools. The chamber’s top Democratic leaders have loudly criticized the plan as an overreach and said more funding, and not new governance, is needed. They plan to issue a counter-proposal this week, and their caucus is trying to close ranks.

You probably won’t see the same tactics playing out in the House. Stacey Abrams, the chamber’s minority leader, is scheduled to attend Deal’s fact-finding trip to Louisiana later this month. She won’t take a firm stance on the measure, but said on GPB’s “Political Rewind” show that she’s got several burning questions.

The strategic divide between the chambers is a perennial concern for Democrats, whose leaders often don’t work in concert on major issues.

Democratic support is essential because Deal’s proposal is a constitutional amendment, requiring two-thirds approval by both chambers before it lands on the ballot in 2016. The GOP holds a commanding edge in the House and a supermajority in the Senate, but Deal will need to pick off Democrats in both chambers to make up for Republicans who bolt.

On Friday’s Political Rewind radio show on GPB, we heard from both House Democratic Leader Stacey Abrams, and Liz Flowers, who is a spokesperson for the Senate Democrats. You can click here to listen to the entire show.

Kentucky Senator Rand Paul will appear at a fundraiser in Buckhead at 5 PM today. As of last night, the reception is still being held. 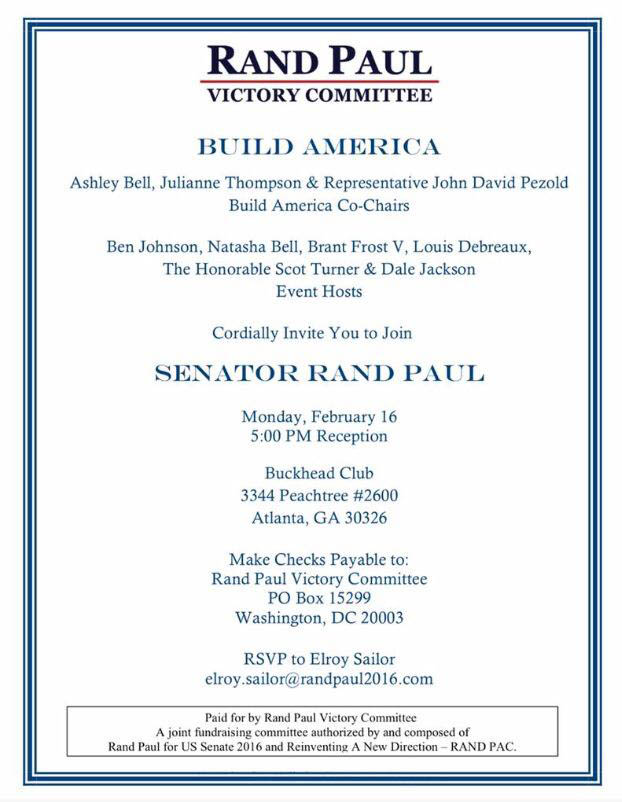 Georgia Secretary of State Brian Kemp continues to get press coverage for his SEC Primary idea, this time from Fox News.

For the most part, the South has been an afterthought in the presidential nominating process. Primaries in this region have either taken place after the nominee has pretty much been established, or as part of a Super Tuesday that includes more significant states in areas far from Dixie.

“We weren’t having a voice in the process,” Kemp told Fox News. “I felt like a way to fix that would be to build this coalition in the South to really entice the candidates to come here and campaign and to give us a voice.”

The ‘coalition’ Kemp talks about is his neighbors in the Deep South: Alabama, Mississippi, Tennessee and Arkansas. His plan is to bring them all together for a Southern Super Tuesday on March 1, 2016.

Kemp needed only to give the word to set March 1 as Georgia’s primary. He has the sort of power many secretaries of state would envy. Tennessee passed a bill back in 2011 to set the first Tuesday in March as primary day, so the Volunteer State also is on board. And Alabama, Arkansas and Mississippi are all moving legislation to join the drive for what Kemp has dubbed the “SEC Primary,” after the NCAA’s powerful Southeastern Conference.

SEC members Texas and Florida are already set for March 1primaries, though it’s expected both will move later in the month to take advantage of winner-take-all rules.

Kemp believes that a moderate candidate (read Chris Christie or Jeb Bush) could gain instant credibility with conservatives across the country by winning in the South. But some Republicans fear that a bloc of southern states all voting on the same day could help propel a candidate considered too far to the right to be elected nationwide.

Merle Black sees a distinct possibility for that to happen. “It could well be that some of the candidates – especially the more conservative candidates — could get a boost if they’re able to persuade voters in these Republican primaries that they are really viable presidential material,” he told Fox News. 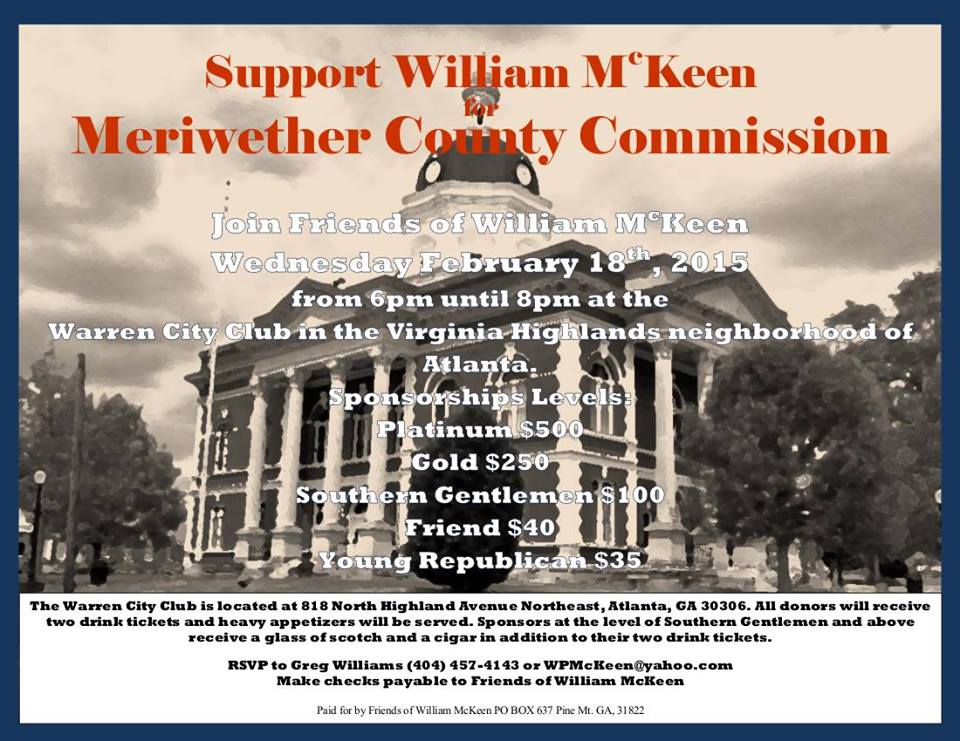 Will McKeen is a friend of mine and a fine candidate for Meriwether County Commission in the March 17th Special Election. I hope you’ll join me and other supporters at his fundraiser on Wednesday.

On Thursday, William is holding a Meet & Greet at the Court Square Cafe in Greenville, GA from Noon to 2 PM.

Hall County residents will have the opportunity to vote for or against SPLOST VII on March 17, 2015.

In Dawson County, March 17th will see elections on an E-LOST (Local Option Sales Tax for Education) and to fill a vacancy on Dawsonville City Council.

A special election will be held March 17th in the City of Ephesus, Georgia on March 17th, with early voting beginning February 23d.

Muscogee County will hold an E-SPLOST vote on March 17, 2015; the last day to register to vote in order to be eligible for the E-SPLOST election is tomorrow, March 17, 2015.

Talbot County will hold a referendum on package sales of beer, wine, and liquor on March 17, 2015.

Whitfield County will hold an election on a SPLOST for public safety funding on March 17, 2015.

College Park will hold elections on a Freeport Tax Exemption, and for one City Council race on March 17, 2015.

The City of Carrollton is holding a Special Election on a Carrollton City Schools Bond Referendum on March 17, 2015.

Avondale Estates will elect a new Mayor on March 17, 2015. I’d vote for Paul Brown if I lived there. I may be biased as he’s a client, but you can check out his answers to a series of questions on Decaturish.com.